In today’s COVID-19 Stories from Around the World, we hear from Medical Doctor and Osmosis Scriptwriter in India, Dr. Jahnavi Narayanan. Dr. Narayanan discusses her experience with the COVID-19 pandemic, including measures taken by the government, and the unfortunate stigma faced by many health professionals in the country.

The Indian episode of the COVID-19 pandemic began on January 30, 2020. The first COVID-positive case was identified in the south Indian state of Kerala, in a student who was on vacation from Wuhan University, China. Since then, the virus has spread throughout the country affecting over 28,380 people as of April 27. Out of this number, 6,362 have recovered and 886 have died. However, epidemiologists estimate that the actual number of infected people could be substantially higher as the testing rate in India is among the lowest in the world, with the major reason for this being a lack of testing kits.

India has taken many measures in order to raise the line and flatten the curve. Let's take a look at what has happened in India these past few months and how it has affected people who live there.

What initiatives has India taken?

In response to the worsening pandemic, India closed its borders to all but essential cargo. On March 24, the country went under a 21-day nationwide lockdown, which was later extended till May 3. All educational institutions, factories, places of worship, commercial and private establishments—except those dealing with essential services like food, healthcare, and banking— were shut down, and all transport services were suspended. Those who violated protocols were charged with heavy fines and even jail sentences of up to a year.

As the case load continued to rise, makeshift hospitals and quarantine facilities were set up in schools, sports auditoriums, and even train coaches. The Indian government then went on to launch a contact tracing app called Aarogya Sethu, literally translating to ("Health Bridge"), earlier in April. In addition to contact tracing, the app also provides the latest updates on local and international on the pandemic.

Efforts have also been made to boost the morale of people. The eve of March 22 saw many citizens coming to their doorways and balconies at the request of India’s Prime Minister, and clapping or ringing bells in appreciation for those providing essential services. Similarly, on April 5, citizens were requested to turn off the electric lights at home at 9 PM for 9 minutes, and light candles, diyas, or flash torchlights as a show of solidarity in the fight against COVID-19. 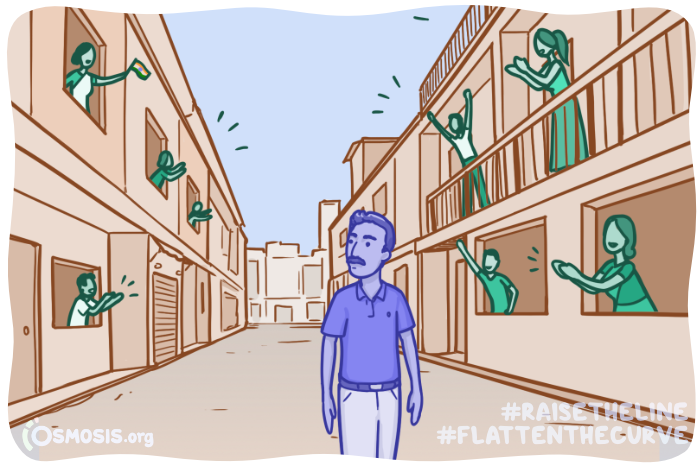 Impact on the people of India

The first few days of the lockdown were bumpy. While some people rushed to shops to stock up on essentials, others were throwing parties and having celebrations, completely disregarding social distancing protocols. There were also many shocking reports of patients escaping from quarantine and isolation centres in many parts of the country. These individuals have been located and prosecuted by the authorities.

The lockdown has disproportionately affected daily wage workers and migrant workers. Without jobs or an income to support their families, thousands of migrant workers crowded in bus stations in an attempt to get back to their villages, creating potential hotspots for viral transmission.

However, the majority of citizens have been abiding by the rules and are finding ways to cope with the circumstances. For example, educational institutions have begun teaching and testing students through online platforms. Many NGOs have taken up the task of helping those in need by getting them food, water, and medicines. The textile industry has shifted gears and begun manufacturing PPE. Some hospitals have also started making their own sanitizers and disinfectants to make up for the shortage.

Despite all the shortcomings, the nationwide lockdown has managed to cut down community transmission. Also the doubling rate of the virus in India, which is the time taken for the infected population to become twice the number, has improved. The doubling rate before the lockdown was 3 days, whereas the post lockdown doubling rate has reduced to 6.2 days. There have also been a few unexpected benefits which include a reduction in crime rates, road traffic accidents and pollution levels throughout the country. There have also been reports of improvements in the water quality of some Indian rivers.

How are the healthcare workers doing?

These are tough times to be working as a healthcare professional. Being on the front lines of the fight against COVID-19 does not come at an easy price. The increased workload, lack of personal protective equipment, added risk of exposure, having to self-isolate from their loved ones to avoid spreading the infection, and news of colleagues succumbing to the virus; all take a huge toll on the mental health of healthcare professionals. The overall impact has led to them reaching out for psychological assistance.

The racial stigma that has arisen during this situation has been widely covered in the media. However, another equally important and highly disturbing issue is the stigma against doctors, nurses, and other healthcare professionals that has flared up all across the country. There have been many reports of health professionals being evicted from their homes by the landlords and being denied transport, because of fear of healthcare workers transmitting the virus. This happened merely hours or days after the entire nation stood on the doors and windows to applaud the healthcare workers. 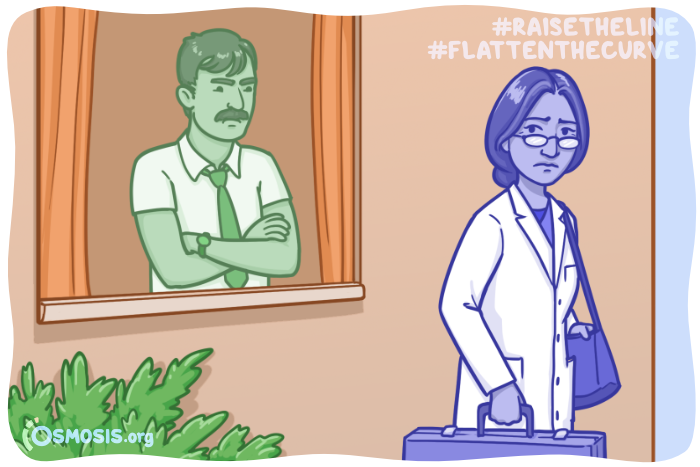 After about four weeks into the lockdown, the government recently decided to partially relax it in certain places, starting from April 20. This has been a welcome change for most parts of India, especially the country’s migrant workers. This relaxation though needs to be implemented carefully and in phases, without undoing the progress achieved by the lockdown. If not, the country could be faced with a second wave of infections.

This is more in the hands of the people than that of the government. With the lockdown gradually coming to an end, it is important for us to stay cautious and continue following social distancing. It is also important to keep ourselves updated on the latest developments from trustworthy sources like government websites, WHO and CDC. You can also check out the daily updates by the Chief Medical Officer of Osmosis, Dr. Rishi Desai, on YouTube, and explore other COVID-19 content on our COVID-19 resources page.

As the Indian Prime Minister Narendra Modi said, “Get ready for a new normal.” With the collective effort of the entire community, we can leverage this dark hour as a stepping stone into a better,  safer world.

Dr. Jahnavi Narayanan is an intern doctor from India and a scriptwriter for the Osmosis team. When not at the hospital, honing her clinical skills or writing scripts, she can be seen tapping into her artistic side—sometimes dancing, sometimes drawing.