PlansLibrary
Free trial
SubscribeFree trialLog inPlansLibrary
In today’s COVID-19 Stories from Around the World blog post, third-year medical student Sanad Alghezawi shares an update of how the COVID-19 pandemic is unfolding in his home country of Jordan.

On March 2, the Jordanian government announced the first COVID-19 case in the kingdom, and began implementing serious measures to keep the situation under control. The first in this series of decisions came on March 10 with a travel ban to affected areas including China, Germany, Italy, and Spain. Additionally, the government announced the closure of seaports and land borders, and initiated a precautionary 14-day-long quarantine for anyone entering the kingdom.

The beginning of the pandemic in Jordan

Following these announcements, tensions began to rise within the country in response to the government’s measures, as well as from observations of how other countries were handling the pandemic. Fortunately, the government worked quickly and effectively, and didn’t wait until the situation got out of hand.

On January 31, the kingdom sent a dedicated flight to Wuhan to bring back 71 students from the epicenter of the pandemic.

By March, the government began implementing protective measures. The first of these focused on banning all gatherings to limit the spread of the virus. All the educational institutes in Jordan were to be suspended for two weeks; this was extended by an additional month. All events, conferences, and tournaments were postponed; all gyms, malls, mosques, churches, cinemas, and other public places were also closed.

Following these closures, the government took further action, and decided to suspend all flights to and from the kingdom. All travelers who had entered the country after March 16 were to enter a mandatory 14-day quarantine. Around 5,000 passengers who came to the kingdom during that time entered mandatory quarantine. They were escorted by security forces from the airport to hotels in the Dead Sea and Amman, the capital of Jordan.

At this point in time, all borders of the country (air, sea, or land) were closed until further notice. The kingdom had isolated itself from the rest of the world in hopes of keeping the number of cases as low as possible. His Majesty King Abdullah II issued a royal decree to activate the National Defense Law, and Jordan entered a state of a national lockdown, with the army and police called in to patrol the streets. The National Center for Security and Crisis Management became the main platform in the kingdom to inform the population about the virus and keep them updated on the situation. 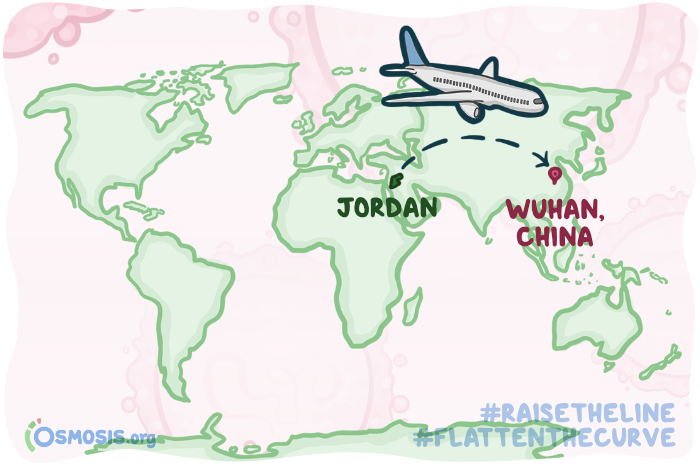 Healthcare system in Jordan and the crisis of COVID-19

The healthcare system in Jordan started working early by taking a series of precautionary measures to ensure all hospitals were ready to admit any potential cases of COVID-19. Major governmental hospitals began preparing sectioning off quarantine zones to admit any patient who has the virus. One of the largest government hospitals in the kingdom has installed a “Triage tent” to deal with emergency cases and help raise the line by  relieving pressure on hospitals

The Ministry of Health issued a variety of educational materials to educate Jordan’s population about the virus, and show them how to protect themselves from getting it. The ministry also launched a dedicated website featuring COVID-19 related news, emergency hotlines, and FAQs to help spread awareness about the disease.

The Emergency Medical Services (EMS) began working harder than ever to assist people in need of any medical help or emergency, responding effectively to thousands of situations every single day, including critical medical conditions like renal failure patients, cancer, and heart diseases, by facilitating their transportation to hospitals for dialysis or chemotherapy sessions. The Ministry of Health approved the use of the controversial drug hydroxychloroquine as a supportive treatment for all cases in the kingdom.

Some parts of the kingdom were even isolated from the rest of the country, and epidemiological teams conducted mass testing and contact tracing campaigns to identify the source of the infection in those areas.  A major sterilization campaign was conducted throughout the kingdom to sanitize all public locations, streets, malls, and tourist sites. 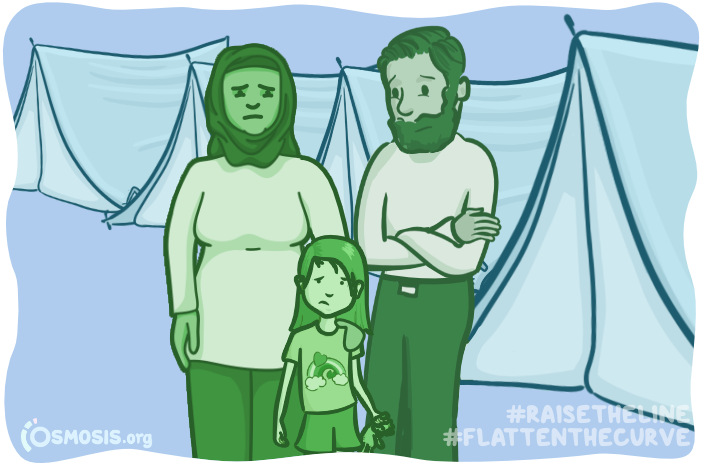 How did COVID-19 affect the educational process in Jordan?

Since the beginning of the lockdown, the government began working on a system to ensure students could continue their education with minimal interruptions. The Ministry of Education launched an online platform that provides videos and online classes to all grades, they have also launched two new satellite channels that air live classes for anyone looking to learn. All universities in the kingdom have started online classes to keep the educational process running during this crisis.

To see the effect of this crisis on medical students in Jordan, I interviewed my colleague Sara Nusierat, who is a sixth-year medical student studying in a Jordanian university. Sara is continuing with her clinical rotations via online Zoom meetings, during which she meets with her colleagues and Attending Physician. Together, they discuss cases, and examine X-rays and lab results just as they would in hospital.

Sara noted that many medical students (including her) were feeling anxious and feeling lost at the beginning of the pandemic in Jordan,  especially when the online classes started, but soon after, they started to feel more relaxed about the situation. Final-year medical students are feeling the most stress, as their graduation dates have been postponed, which means a delay in their applications for residency programs in Jordan or abroad. Unfortunately, because of the current crisis and the closure of all borders in Jordan, everything is on hold.

Daily life during the lockdown

The lockdown has affected society on many levels. Many workers have been left jobless since everything is closed; only essential businesses like supermarkets and pharmacies are open. While disruptive, these measures have proven effective in keeping the number of new cases under control.

Currently, Jordan is under curfew, which begins daily from 6 PM until 8 AM the following day, and is announced by blaring sirens. From 10 AM to 6 PM, people are allowed to go out and buy their necessities on foot. Using cars is forbidden to all citizens, with the exception of doctors and essential workers who are important for the maintenance of normal life, as well as people who hold special permits.

On weekends (which come on Friday and Saturday in Jordan) a 48-hour curfew takes place every week, starting from Thursday at 6 PM until Sunday at 8 AM. All gatherings including prayers, weddings, and funerals are suspended. Strict actions are taken against anyone who violates the orders, as well as against anyone who knows or suspects they have COVID-19 and hides it.

What Jordan’s government is doing to help

During the curfew, the government has been delivering some basic necessities to citizens via buses and cars operated by a specialized crew.

To help people experiencing economic hardship and workers who are paid day-by-day, a series of economic measures have been implemented. A special bank account was opened for anyone who wants to help and donate, and the Social Security Corporation has announced the launch of supporting programs to all companies and workers in Jordan. The government has guaranteed that all salaries will be paid to all employees affected by the current crisis. Some officials have even donated their salaries to support the country amid this crisis.

The current situation in Jordan

It’s becoming clear that the measures Jordan’s government has taken have been quite effective. In fact, the number of cases starting from last week has been much less than the number recorded at the beginning of the crisis. The country is slowly but steadily trying to reopen some sectors and areas in the kingdom, and has taken new measures to ease the curfew by  allowing more businesses and shops to reopen in specific districts that haven’t recorded any COVID-19 cases.

The government has announced a plan a few days ago to bring back all Jordanian students studying abroad, with plans to quarantine all the students for a period of 17 days after their arrival.

When all of this will end?

This is a very difficult question that all people in Jordan and around the world have been asking. We cannot say for sure when the COVID-19 crisis will be over, but scientists and doctors worldwide are working around the clock to develop a vaccine.

The only thing we can be sure about is that if every single one of us does their part to take precautions, we can help to decrease the number of cases. Social distancing, practicing good hygiene habits, applying strict measures, and sticking to the laws of your country are the biggest ways the general population can help raise the line and flatten the curve to slow the spread of COVID-19.

Stay home and stay safe: by practicing social distancing, you’re protecting yourself, your family, and your community from this virus!

Sanad Alghezawi is a third-year medical student at Xavier University School of Medicine–Aruba. He is currently in Jordan preparing to take his USMLE Step 1 exam with the aim of continuing with clinical rotations in the U.S. In his free time, he likes to spend time with his friends and family, go on hikes, cook, or catch up on new medical videos.