Profound inspiration can often be found in unexpected places. Today on the Osmosis blog, medical student and Osmosis Medical Education Fellow Esumary Oyowe shares insights she gained on intelligence and learning while teaching 16–18 year olds during the summer. These learnings stayed with Esumary in terms of how she approaches studying, and have also shaped the ways she hopes to contribute to medical education in the future.

My most rewarding experiences tend to happen when I least expect them. As medical students, we often have a plan, a list of achievements and extracurriculars we must obtain in order to get the perfect CV to further our career. This attitude has been ingrained into us since secondary/high school when applying to colleges/universities.

Although I always liked the idea of being a medical educator, I never sought out a teaching job. By a happy coincidence, I was able to teach a small class on medical sciences and life in medical school to a group of teens aged 16–18 who expressed interest in pursuing a career in medicine. This opportunity gave me a deeper understanding of how best to communicate, motivate, and understand teenagers—surprisingly, a lot of the learnings translated well to interacting with my fellow colleagues and ultimately, my patients!

As a child I was always praised for being bright or intelligent. This praise, however, did not continue into secondary/high school; I started to struggle with certain subjects, particularly math! At the time, my father offered what he felt was reassurance saying that as he also struggled with math at school and that it was “not in our genes” to be good at math! That makes sense I thought, but I then wondered why I did not inherit my father’s gift for languages. He studied French and English literature, while I would often spend days on end trying to write one paragraph for any essay I had due!

This is where Carol Dweck’s research on growth vs. fixed mindset is so interesting. Dweck believes we have promoted the fixed mindset of intelligence—which posits that that intelligence is purely innate with little environmental influence—for far too long. Through her research, Dweck found that if we encourage a growth mindset, not the belief that intelligence is fixed, then students eventually perform better and improve in the long run. 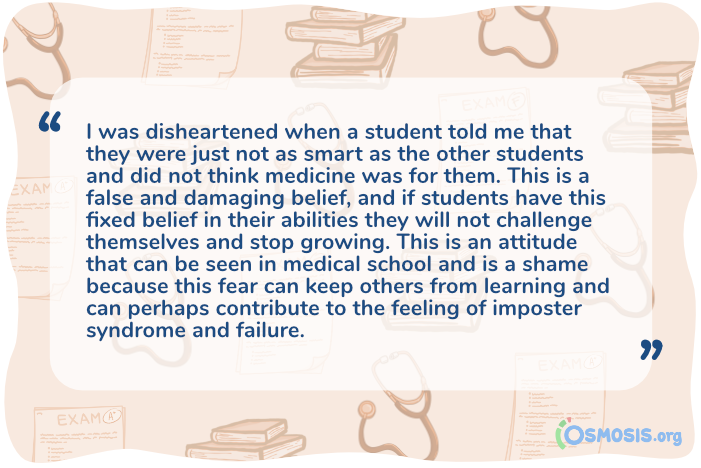 This idea of our genes fully determining our capabilities came up again during teaching when I noticed disparities emerging between my students. Learning requires building blocks of knowledge and students with less knowledge had to catch up with the students that already had a good foundation. Often, students who went to high-ranking schools were able to follow the curriculum much more easily and more readily engage in more deeper topics/concepts, while other students from schools in developing countries felt overwhelmed and frustrated. This frustration often translated into students disengaging and not speaking up because they felt embarrassed to make a mistake in front of everyone in the class.

I was disheartened when a student told me that they were just not as smart as the other students and did not think medicine was for them. This is a false and damaging belief, and if students have this fixed belief in their abilities, they will not challenge themselves and stop growing. This is an attitude that can be seen in medical school, and it’s a shame because this fear can keep others from learning and can perhaps contribute to the feeling of impostor syndrome and failure.

Helping my students make the shift

I helped my students combat these feelings using several strategies.

For example if they made a very good point about any topic we were discussing or if they asked a question that was relevant I would make sure to thank the student in front of everyone in the class.

I created an environment where students felt comfortable with failure

I would encourage students to ask questions and be honest about things they did not understand. There are no stupid questions! One way I encouraged this was to make it clear I also do not know all the answers. For example, if I was not sure of the pathogenesis of a disease, I would encourage students to research for me and then participate actively in the lesson. Even if they did not understand the disease fully, the effort that was made in understanding the problem would be encouraged because struggle leads to greater understanding and retention ability—not just praising the correct answer!

We are more likely to learn better in a relaxed environment and a good sense of humour can provide this. (Note that the laughter was never at the expense of another student.) 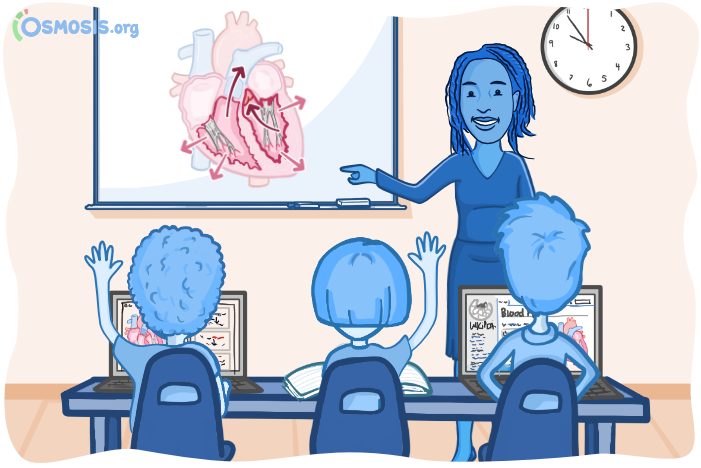 Cultural differences are not always a barrier

My favourite lesson to teach was on medical ethics because there was always a healthy debate. I would encourage students to explain their point of view and talk about the laws and rules in their own countries. When we listen to each other and learn about each other's cultures and experiences, we have more empathy for why people make the decisions they do. This is an important skill for any future clinician when dealing with their patients but also when working with medical colleagues from other countries.

Listening to different points of view can help someone understand your point of view. One particular day in class we were talking about an ethical scenario in which a junior doctor was interacting with a medical senior who was intoxicated. I asked the class, “What would you do in this scenario?” Almost everyone agreed that you had to either talk to the doctor directly or a superior to resolve the situation. However, at the end of the class, I had one student confess to me that in her culture this would not be appropriate, even if their superior was in the wrong!

How I got my students to understand and remember things

Many of the principles I learned while teaching this class have found new life in my study routine, which I developed through lots of trial and error. During class, I would put words they had learned the previous day and their definitions on separate pieces of color paper. I then stuck the papers around the room, and when the students entered for their first lesson, they had to work together to match them up. This promoted teamwork and made learning fun and interactive ! Repeating this activity each day made the information “stick” and my students performed better on end-of-session tests as a result!

I now try as much as possible to make my studying interactive and diverse—this is why I like to use Osmosis! During my classes, I even showed some Osmosis videos to the students. Even though these were teenagers, I hope to use methods like this to improve medical education in the future by creating a healthy but competitive environment where everyone believes they can thrive. I am glad I started teaching, because as much knowledge as I have given my students, I have gained so much back!

Esumary Oyowe is a sixth-year medical student at the Medical University of Pleven. A Nigerian born and raised in Belgium, she has now lived in three different countries. Esumary is thinking of specializing in Emergency Medicine and Critical Care, but also has interests in medical education and research. She lives with her cat, who she enjoys spending a lot of time with, and is passionate about dancing, cooking and jogging!