PlansLibrary
Free trial
SubscribeFree trialLog inPlansLibrary
It's Osmosis's 5-Year Anniversary! As part of the celebrations, we're interviewing one of our most famous voices: Tanner Marshall, Creative Director at Osmosis. Tanner has been with Osmosis almost since the beginning, and has filled a ton of different roles (many at the same time!), including script writer, video illustrator, voiceover artist, and product designer, to name a few. If you've ever watched an Osmosis video, you know Tanner's voice well: get to know him even better in today's blog!

Hi Tanner! Your time at Osmosis has been quite the journey. You’ve worn a ton of different hats, and are in many ways responsible for what makes Osmosis... Osmosis! Can you talk a bit about how you started here, and the road that led you to where you are now?

Howdy! Wow, five years! Why yes, of course I can. Before joining Osmosis, I had a relatively short stint at Khan Academy (KA) where I made health and medicine videos. I learned a bunch from that experience, e.g. voiceovers are hard and pathological organs can be cute if you just put faces on them.

After KA I approached Rishi (who also had worked at KA but had moved on to Osmosis), and convinced him that I’d use my mediocre voiceover and drawing pad skills to make videos for Osmosis as well. Rishi and the team said “OK, but can you make all the videos on all the topics? And I said “...erm, I’ll do my best!” It didn’t go exactly like that, but needless to say I started cranking out videos.

At some point in there, we hired a couple more video creators, which multiplied into an army of amazingly talented illustrators, editors, script writers, and voiceover artists. As we grew the team, I noticed there were a ton of areas that really slowed down the process of making a video and made it really frustrating and difficult.

I started watching programming tutorials and built the skeleton of the internal application we use today for helping to make videos—dubbed “Osmosify.” Nowadays I spend most of my time working on that same application as a programmer, building and improving tools to help us make videos and leaving the actual video creation to the pros.

Of course, that’s a bit of an abbreviation of my journey, but regardless I’m incredibly grateful to have had the opportunity to wear so many proverbial hats along the way.

What were your biggest influences when you were scripting and animating the very first Osmosis videos?

I guess I felt that a lot of educational material in medicine was pretty dull, sometimes overly complex, and lacking personality (which, to be fair, in many cases is understandable). That said, I wanted to make the videos as engaging and interesting as possible while still being respectful and educational.

For the scripts, I’d write them as conversationally as I could, and leave out inaccessible language where possible. If I didn’t think I’d say it out loud to somebody, I’d change it. Along the same lines, for illustrations I’d turn organs and cells into cute recurring or once-off characters, which I think are visually interesting and can also help to remember the material (in my opinion, anyway).

Finally I was frustrated with how typical whiteboard-style videos that were actually live-drawn were so incredibly slow, so I sped up the text significantly during post-production to match the flow of the voiceover.

What prompted you to broaden your horizons and join the product team to work on the Osmosis platform?

I touched on this a bit but essentially when working on the video production app I really found myself following the white rabbit. The more time I dedicated to app development the more I realized it scratched a creative itch very similar to making the videos themselves!

Also, at this point, I’d made a lot of videos—I think over 200—and I was starting to feel a little bit of burnout, so the switch was welcomed. Plus, the talent on our video creation team had grown exponentially, and I felt like the video creation process itself was in great hands without me!

What’s a typical “day in the life” like for you at Osmosis?

Well, for having a remote job, I work pretty typical hours. I generally log on between 7:30 and 8 AM, and work through feature requests, bugs, and tickets on Osmosify I glean from the video team. Then there’s some meetings sprinkled in there, with other product folx or the video team.

One part of the video creation process that I still help with from time to time is voiceovers, so sometimes I’ll get a voiceover or voiceover fix in there. I’ll also hop over to the main site from time to time and do some development work there as well, “spreading joy” via adding characters to various parts of the site where appropriate.

What projects have you worked on at Osmosis that you’re most proud of? Why?

I’m proud of a lot of the projects, actually! From the individual videos about things like Membranoproliferative Glomerulonephritis (I did a ton of the early renal videos) to the larger projects like building Osmosify itself. 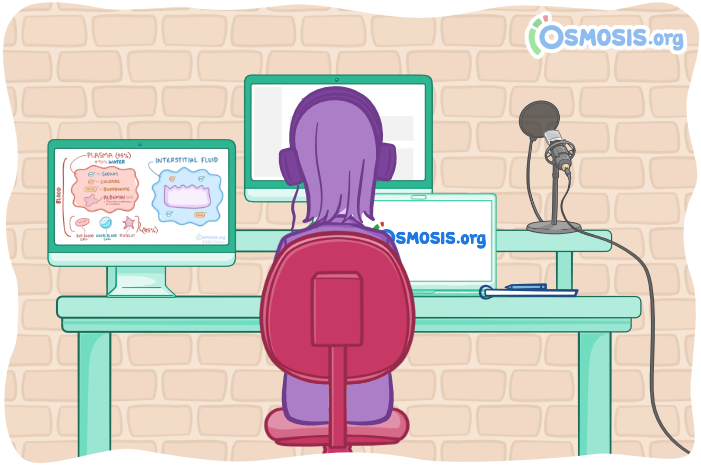 If we want to be more granular, I’m pretty proud of the text animation framework I built early on, which we still use to emulate text writing on the “whiteboard” (it’s by no means a coding miracle, but it’s a thing I built and I feel proud about that, haha). I just think it’s saved us a lot of time over the years where we otherwise would have been writing text by hand... which is an intense endeavor, let me tell you.

Looking back, which project or challenge taught you the most at Osmosis? What did you learn?

Hmm, on the content side of things, I learned a ton when I was working on specific organ systems. I particularly enjoyed diving into the renal systems and learning all about the kidneys and figuring out ways to illustrate various processes. On the product side of things, I’m not even sure, I’ve learned so much in the past couple years.

I’ve certainly learned a lot about vector graphics and how to draw them on the web, which plays a big part in how our videos are animated! Sometimes the math melts my brain a bit, but it’s extremely gratifying to mix creative design and programming!

Can you tell our readers a bit about your favorite videos in your Osmosis playlist?

Absolutely. Here’s a playlist of some of my favorites. I’ve got a bit of everything in there. 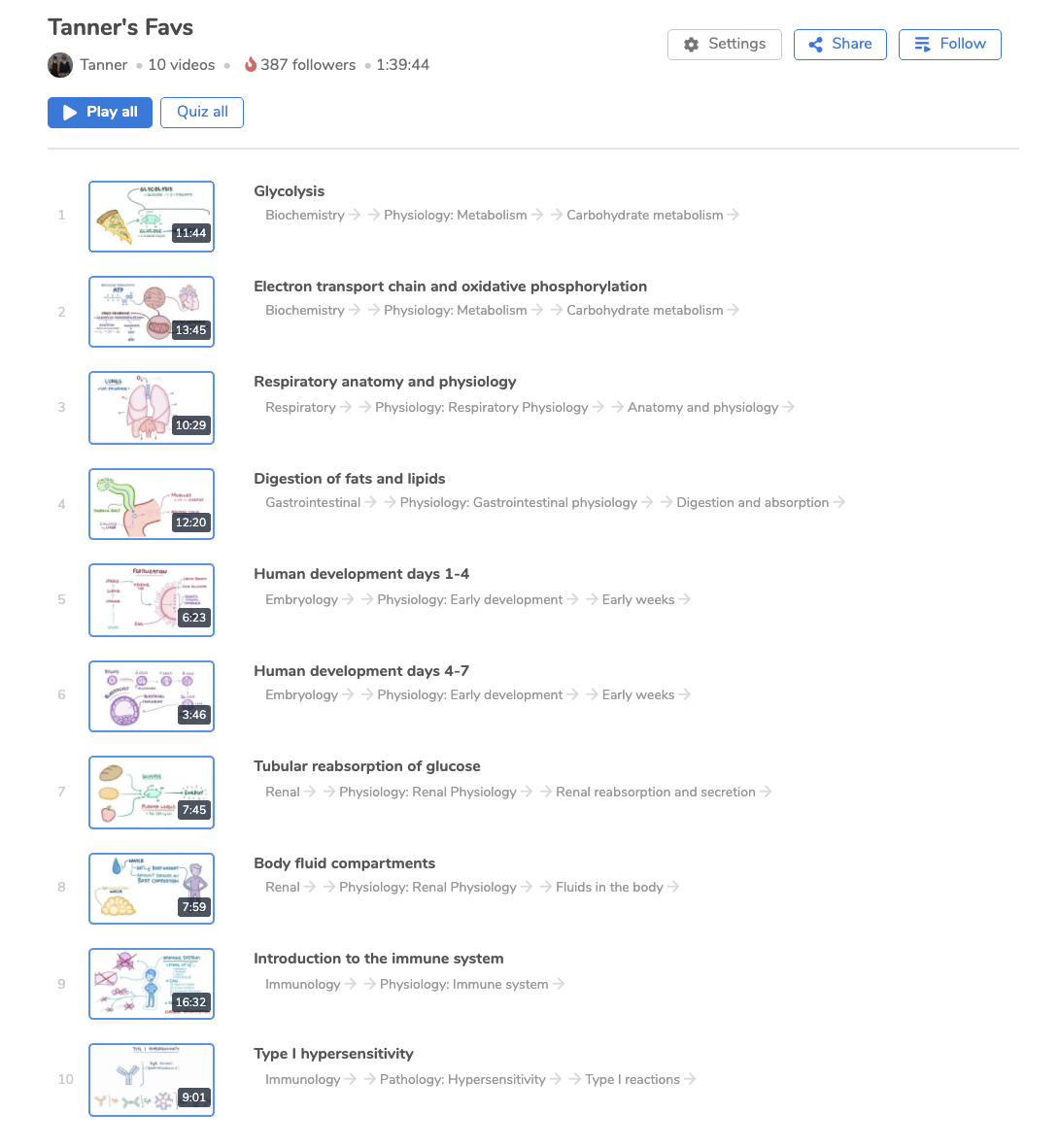 I’ve got some biochemistry videos which I thought were great because for some reason I get a lot of pleasure out of drawing chemical structures. There’s Respiratory Anatomy and Physiology, which was a beast and I feel like is one of my best/favorite videos, because it’s a really digestible overview of the Respiratory system. Digestion of Fats and Lipids is in there (1) because it was an interesting topic but (2) because my partner Kat had a short stint as an Osmosis editor and so we got to collaborate on it!

We’ve also got a couple Embryology videos, which were probably some of the most difficult to illustrate, mostly because there just isn’t a ton of really great content to use as reference. Next, of course, we’ve got some renal videos because I feel like those concepts are tough to visualize and I had quite the time trying to illustrate those mechanisms. Finally there are a couple of immunology videos, which I find super interesting and also particularly amenable to drawing cute characters.

Finally finally—while not technically an official Osmosis website video, I’d be remiss if I didn’t mention this one:

Looking back, what’s the biggest change you’ve seen at Osmosis—within our team, and for our learners?

I started when there were about 10 people, and we have way more than that now—it’s been a real treat to watch the team grow and welcome so many new talented and caring humans! It’s been awesome to see the founders cultivate such an awesome team culture and for new teammates to grow and flourish as a result.

For our learners, when I started we weren’t a video company, period. We didn’t have any of our own videos! Over the years, of course, we’ve made hundreds, if not thousands, of videos and grown our video library to have hours and hours of video content, and reached millions of people through our free content as well as our paid content on both YouTube and Osmosis.org.

Where do you see Osmosis in the next five years?

Boy. I’m never good at these sorts of questions. But if I had to guess I see Osmosis further integrating with not only medical schools but Nursing, DO, and other health professions, as well as translating our content to broaden the reach and impact our videos.

You created our original mascot, Ozzy the Osmosis bot. How do you think he’s spending his retirement now that he’s passed on the torch to our new mascot, Mo the stem cell?

Ah yes, well, being a robot, I imagine he set his sights to the stars and is currently exploring the outer reaches of the galaxy, in search of other planets and beings, so that one day he may return and help us with our Osmosis: Extra Terrestrials library. 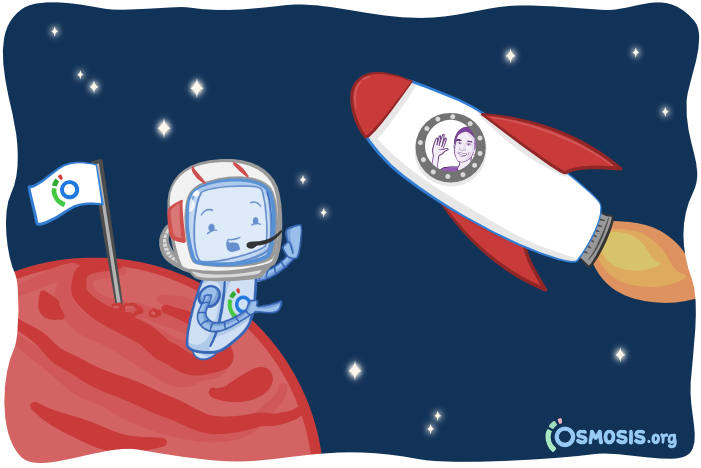 Last question: do you have any tidbits to share about upcoming projects you’re working on that Osmosis learners can look forward to in 2021?

Ironically a lot of the work I do is behind the scenes. But I’ve been working hard at improving our internal application so that one day we might be able to expand pieces of it outside of our own content creators, potentially allowing others to make “Osmosis videos”. That’s still sort of a dream of mine, so we’ll see about 2021, but as always—I’ll do my best!