Today, I am interviewing someone near and dear to me! Before the interview, I want to share some background information.

For a period of 25 years, until November 10th, 2017, a political group called “Hoja de Roble” (in English: Oak Leaf) ruled the Medical Campus of the University of La Plata. They proposed a closed faculty model in which admission was restricted and compulsory—the bar was set high. The academic level, as well as, the hyperspecialization of the profession claimed to be excellent, and everything contrary was isolated from the city’s and country’s situation.

The faculty was run by elitists, it showed during my father’s interview with the dean, who told him that "the son of a shoemaker cannot be a doctor," referring to the fact that people with low economic resources could not become a physician in my country, Argentina.

In view to this situation, there is no better way to refute that quotation than to interview a person whose socioeconomic situation wasn’t the best. He managed to become a doctor and, in my opinion, one of the best in the city of Nueve de Julio: Osvaldo Santucho, head of the Intensive Care department, and also my father. Osvaldo was born in Capilla del Monte, Córdoba, Argentina in 1960. He is a well-known Intensive Therapy and Internal Medicine Physician.

What was your family like and in what socioeconomic position would you place it?

My family was considered middle-lower class, all workers. My family unit consisted of my father, who was a bricklayer, my mother, who was a temporary worker in a hotel in the mountains of Córdoba, mainly in summer and winter where tourism predominated, my sister and me. We had our own home, no frills but no lack of essentials.

If you had to describe a typical day at school, how would you relate it? Make emphasis on how you went, what you did, if you ate/slept there, if you bought books or how you managed to study...

The National University of Córdoba is 100 km away from my town, Capilla del Monte, which would normally be one hour of travel but as it's a mountainous region, the duration is longer. I generally went by bus, which took about 3 hours. The majority of the students lived in Córdoba's city, since student pensions were very popular back then.

In my case, I was at a boarding house run by priests. If you couldn't stay in a pension, there were apartments and rooms that were for rent.

I used books to study. As we have a free public university, each chair was organized in such a way that they provided their official material. But not all chairs did this, so books were used. My father always said "If there is something in which you do not have to skimp on expenses, it is in books." At that time there were no photocopies as it happens today.

As regards food, it’s like today: those who had the possibility of living alone cooked themselves; and those who lived in boarding houses and rented homes ate there. The pension itself, or the family that housed you, fed you. At that time, the student canteens were closed due to the military government. 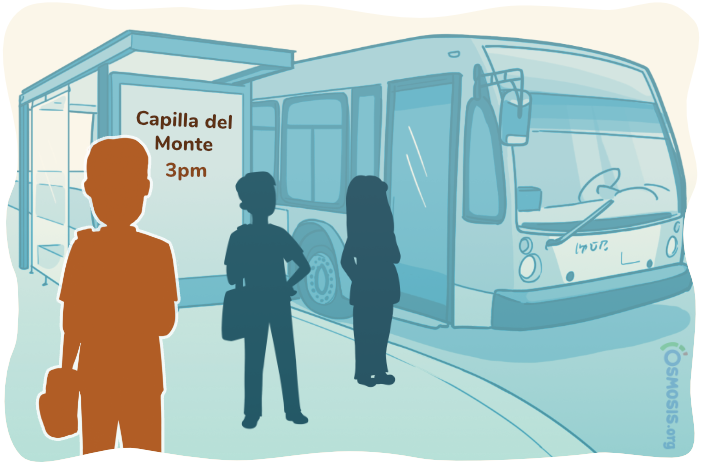 The course schedules were very well coordinated between different subjects, so it allowed you to go to all classes without problems of overlapping subjects. I left Capilla del Monte on a Monday morning heading for Córdoba by bus, arrived at 8 a.m. and then I went directly to the faculty. On Friday afternoons I hitchhiked back to my town. At that time, people were more supportive, there was less insecurity, and if they saw you with a book under your arm, they would pick you up. Normally I arrived at home around 5 pm.

Do you think that if you had had the possibilities that exist today (mainly the internet) it would have been easier for you?

At that time, all current technology didn't exist. In order to communicate with someone you had to use either a landline or letters. If you had to look for information and you didn't have the right items, you had to go to a library and search. You could spend hours or even days finding what you needed. It was really difficult.

As for medicine, the main advance was based on diagnosis and treatment. This is awesome, but at the same time it has some drawbacks since the doctor-patient relationship has deteriorated. Today, there are few physicians who dig into the history and physical examination of the patient; what they do when they receive a patient is, based on the symptoms they have, go deeper into unnecessary complementary tests such as irradiations or invasive processes that even put the person's health at risk.

Did you graduate as a general practitioner or surgeon? Is this specialty the one you always wanted?

Actually, my title says “surgeon” but you received your degree as a generalist oriented in surgery. To perform surgery you had to do a residency. Unlike other universities in Argentina, the practical hours predominated over the theoretical ones, so when you received the degree you already have a lot of knowledge, more than what they teach you in the theory part.

I would have liked to follow what was truly my calling, which was plastic surgery. But I could not basically because of the aforementioned. My father was a laborer and to keep on studying involved expenses. Although these expenses were an investment, they were expenses the same. And once I came to live in a town in the province of Buenos Aires, I already had a family and I had to think about how to maintain them. To continue the specialty I needed to go to the capital of Buenos Aires, and that implied travel, time ... it was too much.

What do you think of the phrase "the shoemaker's son can't be a doctor"?

Well, in principle to think that only those belonging to high social class can be a doctor is a retrograde thought. Since the University Reform of Argentina, made in the 1918 revolution which happened precisely at the National University of Córdoba, it is considered that the university is “democratized”. Before that, only the children of those in power could access university.

For me, to pursue any career you need two things: vocation and ability. The desire and will are essential. Obviously, those who have greater purchasing power have more tools to carry out the race, but this alone does not guarantee anything. Without will, without desire and if you don't like it, you won't get anywhere.

Francisco Santucho is a sixth-year medical student at National University of La Plata, Argentina.  His hobbies are playing the piano and playing video games, although he also likes to hang out with friends and play the guitar, drink ‘mate’ and play cards.

Try Osmosis today! Access your free trial and find out why millions of current and future clinicians and caregivers love learning with us.