PlansLibrary
Free trial
SubscribeFree trialLog inPlansLibrary
This week, we are sharing another USMLE® Step 1-style practice question to test your knowledge of medical topics. Today's case involves a 78-year-old man with altered mental status. The patient has a Swan-Ganz catheter placed in the right heart. Can you figure out the most likely cause of this patient's clinical presentation?

A 78-year-old man presents to the emergency department with altered mental status and fatigue. He is found to be critically ill and is admitted to the intensive care unit (ICU) for further evaluation and monitoring. While in the ICU, the patient has a Swan-Ganz catheter placed in the right heart for continuous hemodynamic measurements. An initial set of readings is demonstrated below:

Which of the following is the most likely cause of this patient's clinical presentation?

A. Bacteremia due to a Gram-negative rod

C. Thrombus in the pulmonary artery

Scroll down to find the answer!

→ Reinforce your understanding with more self-assessment items on Osmosis Prime.

The correct answer to today's USMLE® Step 1 Question is...

Before we get to the Main Explanation, let's look at the incorrect answer explanations. Skip to the bottom if you want to see the correct answer right away!

The incorrect answers to today's USMLE® Step 1 Question are...

A. Bacteremia due to a Gram-negative rod

C. Thrombus in the pulmonary artery

Incorrect: Obstructive shock is a subtype of “cold shock” and can be caused by pulmonary embolism. It can present with increased systemic vascular resistance, decreased cardiac output, and decreased mixed venous oxygen saturation. In causes of obstructive shock secondary to pulmonary embolism, pulmonary capillary wedge pressure (surrogate of left atrial pressure) is reduced since less blood is reaching the left heart.

This critically ill patient had a Swan-Ganz catheter placed and hemodynamic measurements taken. The findings include a decreased cardiac output (of which the cardiac index is a surrogate measure taking into account BMI), increased systemic vascular resistance, increased pulmonary capillary wedge pressure (PCWP), and decreased mixed venous oxygen saturation (SvO2). These parameters are consistent with cardiogenic shock, of which heart failure is a common etiology.

A Swan-Ganz-catheter is a flexible tube passed into the right side of the heart and the pulmonary artery. It is used to take measurements of cardiac output (heart x stroke volume), systemic vascular resistance (80x (Mean Arterial Pressure - Mean Venous Pressure or CVP) / Cardiac Output), PCWP (surrogate of left atrial pressure), and SvO2 (measure of total body oxygen consumption). While seldom used in modern ICUs, it was historically used to provide useful information in determining the etiology of a patient’s shock. 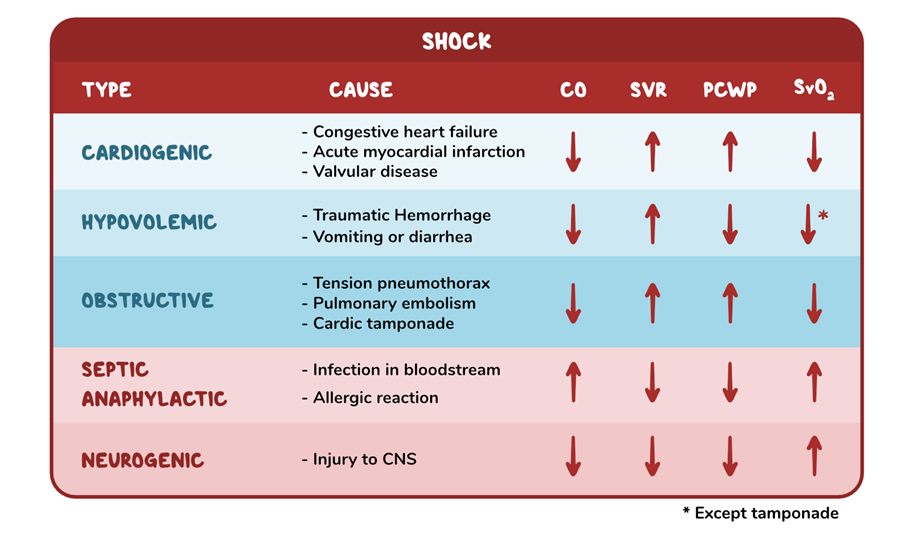 The etiology of shock can be elucidated by placement of a Swan-Ganz catheter and obtaining measurements of SVR, PCWP, CO, and SvO2.

Want more USMLE® Step 1 practice questions? Try Osmosis today! Access your free trial and find out why millions of current and future clinicians and caregivers love learning with us.

The United States Medical Licensing Examination (USMLE®) is a joint program of the Federation of State Medical Boards (FSMB®) and National Board of Medical Examiners (NBME®). Osmosis is not affiliated with NBME nor FSMB.