PlansLibrary
Free trial
SubscribeFree trialLog inPlansLibrary
This week, we are sharing another USMLE® Step 1-style practice question to test your knowledge of medical topics. Today's case involves a 33-year-old man with increased urination and constant thirst. Can you figure it out?

A 33-year-old man comes to the emergency department because of increased urination and constant thirst despite drinking more than 7 liters of water each day. The symptoms began two weeks ago. Past medical history is notable for bipolar disorder and type 2 diabetes mellitus. The patient takes lithium and metformin. At the time of arrival, temperature is 37.0°C (98.6°F), pulse is 75/min, and blood pressure is 125/78 mmHg. The remainder of the examination is noncontributory. Laboratory results are as follows:

A trial of vasopressin is administered. However, there is no significant increase in urine osmolality within 2 hours. Which of the following best describes the most likely pathophysiology of this patient’s presentation?

A. Resistance of kidney V2 receptors to antidiuretic hormone (ADH)

B. Inadequate ADH secretion from the pituitary gland

C. Increased presence of osmotically-active substances in the urine

Scroll down to find the answer!

→ Reinforce your understanding with more self-assessment items on Osmosis Prime.

The correct answer to today's USMLE® Step 1 Question is...

A. Resistance of kidney V2 receptors to antidiuretic hormone (ADH)

Before we get to the Main Explanation, let's look at the incorrect answer explanations. Skip to the bottom if you want to see the correct answer right away!

The incorrect answers to today's USMLE® Step 1 Question are...

B. Inadequate ADH secretion from the pituitary gland

Incorrect: This answer describes central diabetes insipidus (DI). Individuals with central DI often exhibit a greater than 50% increase in urine osmolality after administration of vasopressin (since their kidneys are capable of responding to the hormone by increasing water reuptake). In contrast, the patient in this vignette had no significant increase in urine osmolality, making nephrogenic DI more likely.

C. Increased presence of osmotically-active substances in the urine

Incorrect: Osmotic diuresis can sometimes be seen in patients with uncontrolled diabetes. While this patient has diabetes, his blood sugar level is not significantly elevated. Moreover, even in patients with poorly-controlled diabetes, an increase in urine osmolality would be expected after vasopressin administration, since the kidneys should be capable of responding to the hormone.

Incorrect: This answer describes primary polydipsia. Patients with this condition consume excessive fluids even in the absence of physiologic stimuli to drink. Primary polydipsia is often associated with psychiatric conditions, such as schizophrenia or anxiety disorder. Patients with psychogenic polydipsia have both reduced serum osmolality (due to increased water content) and urine osmolality (since the body is trying to eliminate surplus water via urine).

Incorrect: Glomerular hyperfiltration is the hallmark of early diabetic nephropathy. It arises secondary to non-enzymatic glycation of tissue proteins in patients with chronic hyperglycemia. It is generally asymptomatic and is diagnosed based on laboratory abnormalities (e.g. elevated GFR).

The clinical findings of polydipsia and polyuria in a patient taking lithium should raise the suspicion of diabetes insipidus (DI). The inability to raise urine osmolality after a trial of vasopressin makes the diagnosis of nephrogenic DI most likely. 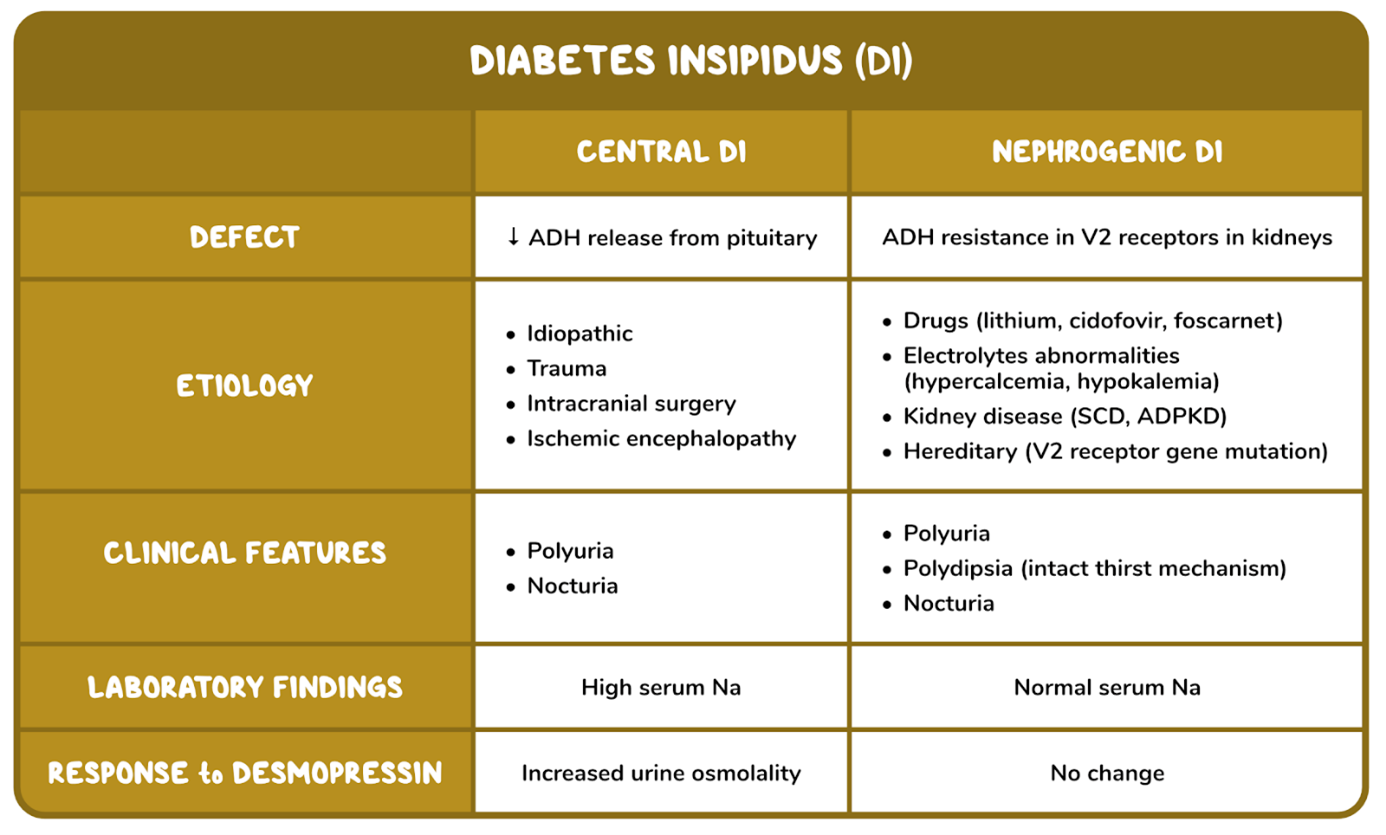 DI is characterized by excessive urination, thirst, and an inability to concentrate the urine due to a lack of, or poor response to, antidiuretic hormone (ADH). It is categorized into nephrogenic DI and central DI. Nephrogenic DI occurs when V2 receptors develop resistance to ADH. It is often caused by medications (e.g. lithium, demeclocycline) and electrolyte anomalies (e.g. hypokalemia, hypercalcemia). In contrast, central DI is caused by a lack of ADH secretion from the posterior pituitary. It can be idiopathic or secondary to brain malignancies, pituitary ischemia or CNS infections.

Nephrogenic DI occurs when V2 receptors in the kidneys become resistant to ADH. Common causes of the condition include medications (e.g. lithium) and electrolyte anomalies. Symptoms of both nephrogenic and central DI include polyuria, polydipsia, and an inability to concentrate urine.

Want more USMLE® Step 1 practice questions? Try Osmosis today! Access your free trial and find out why millions of current and future clinicians and caregivers love learning with us.

The United States Medical Licensing Examination (USMLE®) is a joint program of the Federation of State Medical Boards (FSMB®) and National Board of Medical Examiners (NBME®). Osmosis is not affiliated with NBME nor FSMB.