A 29-year-old woman, gravida 0, para 0, comes to the clinic because of heavy menstrual bleeding in the past 6 months. Her menses started since she was 13, and since then, it is usually expected every 28 days and lasts for 3-5 days. In the last 6 months, her menstruation period is preceded with lower abdominal pain that sometimes lasts up to 10 days, but resolves within the first couple of days of menses. She also experiences pain with defecation and painful sexual intercourses which exacerbate in the few days before menses. On examination, she looks pale, her BMI is 22 kg/m2, temperature is 36.8°C (98.2°F), pulse is 82/min, respirations are 12/min, and blood pressure is 114/72 mm Hg. She has mild tenderness with lower abdominal palpation. The rest of the examination is unremarkable. Which of the following is the gold standard for diagnosing her condition? 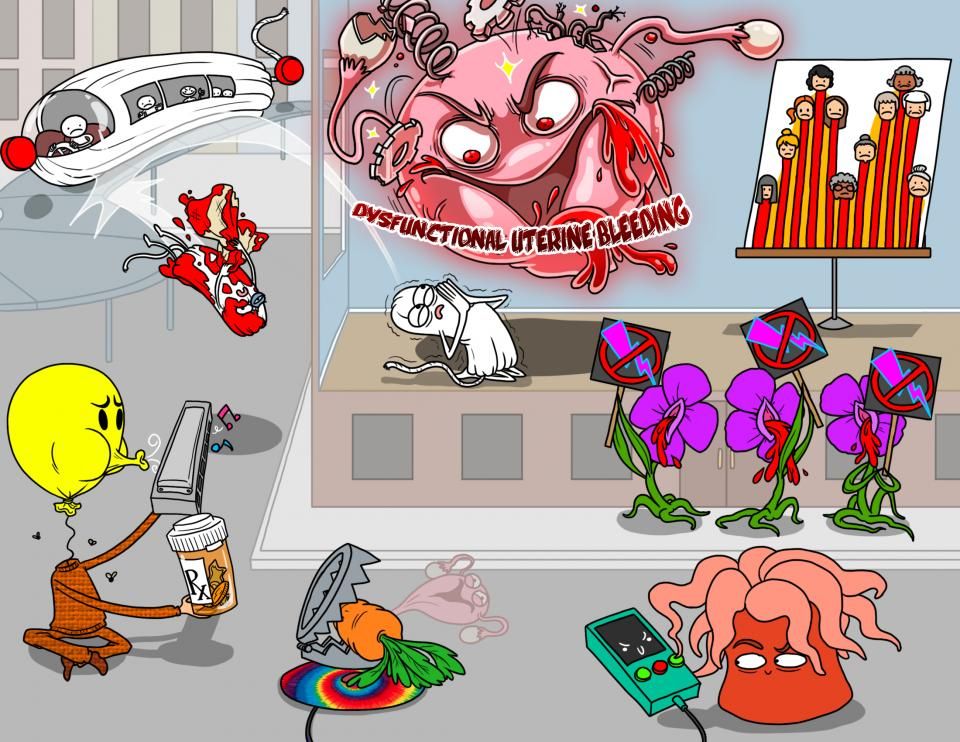 Normal vaginal bleeding is called menstruation, and it usually lasts less than 8 days, and no more than 80 milliliters—or slightly less than 6 tablespoons—of blood are lost.

The first day of menstrual bleeding marks the beginning of the menstrual cycle, which normally repeats itself every 24 to 38 days.

Additionally, normal menstrual cycles are regular, meaning that the shortest and longest cycles in a 12 month period don’t usually vary by more than 9 days.

Pathological vaginal bleeding, or “abnormal uterine bleeding”, on the other hand, describes any variation in normal bleeding patterns - in terms of age, frequency, regularity, duration, or volume.

Age-wise, any kind of bleeding is considered abnormal before menarche and after menopause.

Abnormalities in frequency and regularity can mean that cycles either occur irregularly, or that they are very short or very long. This also includes unscheduled intermenstrual bleeding - bleeding between cycles.

Finally, volume-wise, vaginal bleeding that is profuse enough to cause changes in hemodynamic status, even in the context of an otherwise normal menstrual cycle is considered pathological.

So, the first step in assessing vaginal bleeding is checking the hemodynamic status, by looking for signs of hypovolemia.

If there’s hypovolemia, lab work includes a CBC, which usually shows a normal hemoglobin level, because the individual is losing whole blood.

Over the next 24 hours, there’s a physiologic compensation of holding onto more water, and IV fluids are usually given - and that decreases the hemoglobin level.

In hemodynamically unstable individuals, fluid resuscitation begins immediately, with 500 milliliters of normal saline or lactated Ringer’s solution given over 30 minutes. Afterwards, the rate of fluid is adjusted depending on their hemodynamic status.

Once the individual is hemodynamically stable, it’s time to identify the underlying cause.

Some causes are more frequent in certain age groups.

In the premenarchal age group, the most likely cause is a foreign body inserted by the girl herself - in which case, a speculum exam can be done to identify and remove it.

In children, a speculum exam may be quite traumatic and should be performed under anesthesia.

A speculum exam can also identify lacerations and bruising which may be the cause of vaginal bleeding, and may be signs of sexual trauma and child abuse.

At the other end of the spectrum, in the postmenopausal age group, where the most common cause of vaginal bleeding is vaginal atrophy.

That’s where the vaginal epithelium becomes thin, dry and inflamed due to lower estrogen levels.

With vaginal atrophy, there may be symptoms like vaginal dryness, burning, pruritus, abnormal discharge and dyspareunia, which is pain during intercourse.

On a speculum exam, the vaginal epithelium looks pale, smooth and shiny.

Treatment is with local estrogen creams.

And then there’s vaginal bleeding in reproductive-age females.

The first step in this case is to rule out pregnancy, with an urine pregnancy test, or serum beta-HCG levels.

If that comes back negative, then we have to confirm that the genital tract is the source of bleeding - that’s because urinary and gastrointestinal bleeding may also be mistaken for abnormal vaginal bleeding.

In general, if bleeding only occurs during urination or defecation, it’s more likely that the source is the urinary or the GI tract, respectively.

Once the genital tract is the confirmed source of the bleed, physiological midcycle bleeding should be considered.

This is when bleeding, or light spotting, happens at the time of ovulation, and midcycle pain can also be present.

However, other causes must be ruled out first. So, a speculum exam should be done to rule out vaginal or cervical lesions.

Cervical causes include cervicitis, in which case the cervix looks red and inflamed, and there may be bloody cervical discharge, or cervical polyps, which look like little fleshy bits of tissue dangling from the cervix.

Cervical cancer is also a consideration, and even if there’s no mass visible to the naked eye, a pap test should be done to screen for cervical cell anomalies.

Finally, in the presence of vaginitis or cervicitis, especially when associated with bloody discharge, testing for sexually transmitted infections like chlamydia and gonorrhoea should be done.

If the lower genital tract is not the source, then the blood may be coming from abnormal uterine bleeding.

In non-pregnant, reproductive age females, a mnemonic for causes of uterine bleeding is PALM COIEN, with an E thrown in to make it work.

PALM covers structural causes - which is when there’s a growth of some sort that causes bleeding: P for polyps, A for adenomyosis, L for leiomyoma, commonly known as fibroids, M for malignancy. COIEN, on the other hand, covers the non-structural causes: C for coagulopathy, O for ovulatory dysfunction, I for iatrogenic, E for endometrium, and N for “not yet classified” - kind of an anticlimactic ending, but hey, it works!

So let’s go through the structural causes - P for polyps first.

Uterine, or endometrial polyps, are growths of endometrial glands and stroma that protrude into the uterine cavity - and they’re usually benign. They are more frequent in females who are on tamoxifen therapy, a medication sometimes given for breast cancer.

With uterine polyps, bleeding is usually light, sometimes referred to as spotting, and it’s commonly intermenstrual - or in between periods.

A transvaginal ultrasound can help identify the polyp, and then a hysteroscopy can be done to remove it.

With a hysteroscopy, a tiny telescope is passed through the cervix and into the uterus, to visualize the uterine cavity and remove the polyp.

Afterwards, a histologic examination of the polyp can confirm that the polyp is benign.

Next up, there’s A for adenomyosis.

Adenomyosis is a specific form of endometriosis, in which endometrial tissue develops ectopically in the myometrium - or the muscular layer of the uterus.

The reason that this happens isn’t well understood. But the result is that this ectopic endometrial tissue responds to hormonal changes throughout the menstrual cycle just like the endometrium inside the uterine cavity.

So with adenomyosis, there’s typically dysmenorrhea, or painful menstruation. Heavy menstrual bleeding and chronic pain may also be present.

On physical examination, the uterus is enlarged, and boggy, meaning soft on palpation.

The tricky thing is that the only definitive diagnosis for adenomyosis, or endometriosis for that matter, is histopathological analysis of the uterus after hysterectomy or removal of the uterus.

However, hysterectomy is only recommended in individuals who have completed childbearing.

If the individual wishes to have children in the future, symptoms are usually managed with hormonal medication, like combined oral contraceptives.

Uterine fibroids are benign tumors that arise from the smooth muscle cells of the myometrium, and they’re the most common pelvic tumor in reproductive age females.

Depending on their location, fibroids are classified as intramural, submucosal, and subserosal.

Intramural fibroids are completely within the myometrium.

Submucosal fibroids originate just below the endometrium and they protrude into the uterine cavity.

Finally, there’s subserosal fibroids, which are located in the myometrium right below the outer, serosal layer of the uterus, and they may extend between the folds of the broad ligament - in which case they’re called intraligamentary.

Now, with fibroids, there may be heavy or prolonged menstrual bleeding, and also mass-related symptoms, like pelvic pressure and pain.

Sometimes they may distort the uterine cavity, causing infertility. When big enough, they may compress other pelvic structures, like the bladder and ureters, causing urinary frequency and difficulty emptying the bladder, or the rectum, causing constipation.

On pelvic examination, the uterus is irregularly enlarged.

The diagnosis is confirmed with a transvaginal ultrasound, on which fibroids usually look like hypoechoic, or dark, well-circumscribed masses.

Treatment options for uterine fibroids include expectant management - or watching and waiting, removing the fibroid, or shrinking it with medical therapy or interventional radiology procedures.