A 7-year-old boy is brought to the emergency department with 3 days of progressively worsening lethargy, irritability, and confusion. The child’s grandmother noticed the boy had trouble walking earlier in the day. He has no significant past medical history, but he recently returned from a camping trip 7 days ago. The grandmother is unable to provide further details. The patient’s temperature is 39.0°C (102.2°F), pulse is 102/min, respirations are 16/min, and blood pressure is 115/72 mmHg. Physical examination reveals a stuporous child that is arousable with sternal rub. Nuchal rigidity is absent. Ocular examination reveals intense pain with eye movements. Head MRI shows multiple lesions in the subcortical white matter, characteristic of demyelination. The patient receives proper treatment and recovers fully within a week. Which of the following is likely to be found in this patient’s history on further questioning? 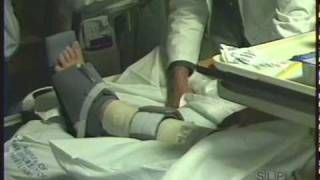 Acute disseminated encephalomyelitis (ADEM), also called post-infectious encephalomyelitis, is a rare but serious neurologic disorder in which nerves in the brain and spinal cord become demyelinated due to an inflammation that takes place after a course of an infection.

The cause of ADEM is not well understood, but it is believed to be autoimmune-related. Symptoms come on suddenly and include headache, fever, difficulty speaking or understanding speech, weakness or paralysis of an arm or leg, double vision, seizures, and coma.