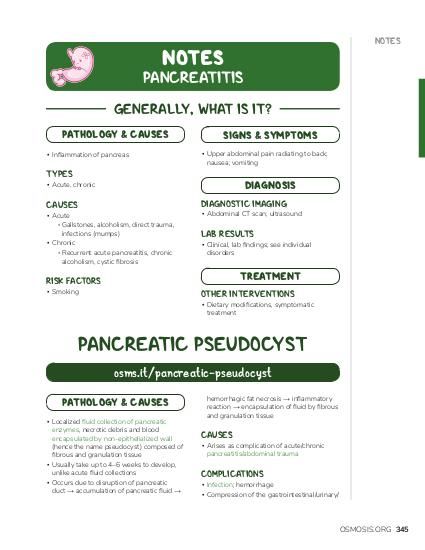 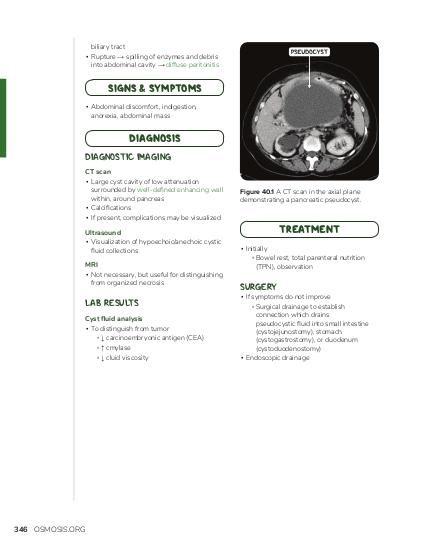 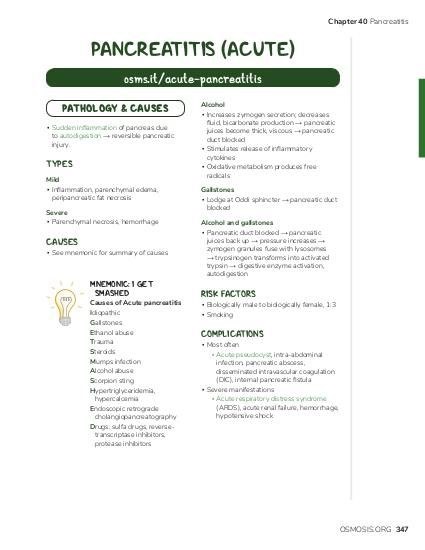 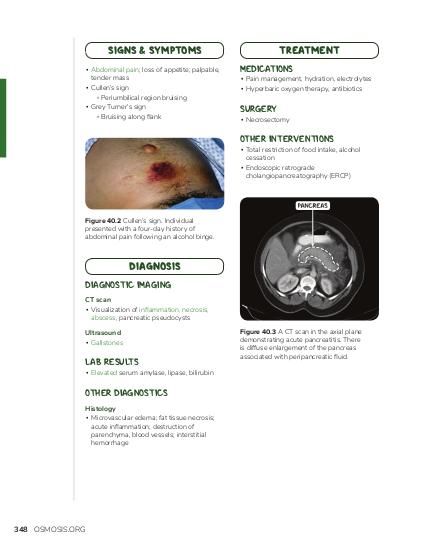 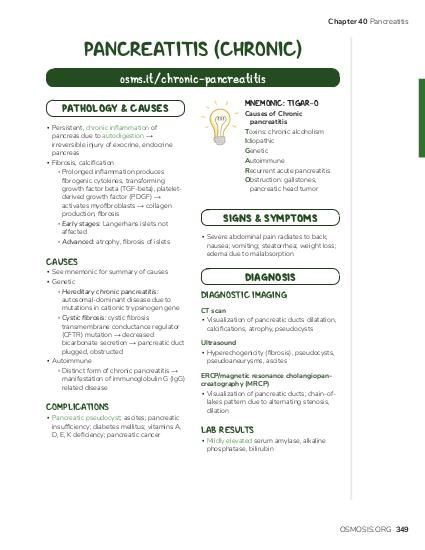 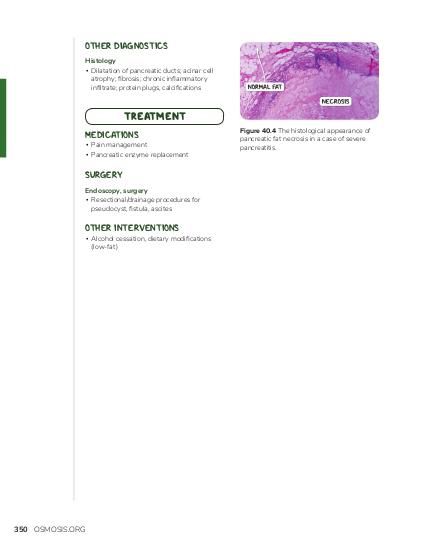 In acute pancreatitis, the tissue undergoes a process called necrosis in which the tissue transforms into a liquid viscous mass.

A 54-year-old man presents to the emergency department with abdominal pain. He has a two-day history of severe epigastric pain radiating to the back with associated nausea and vomiting. He is markedly obese. His medical history is significant for diabetes mellitus and a premature heart attack 10 years ago. He admits to having problems adhering to his medication regimen. He denies alcohol use. When questioned about his family’s medical history he reports that his brother and mother also have known heart problems. CT scan shows diffuse parenchymal enlargement of the pancreas with indistinct margins and retroperitoneal fat stranding. The biliary tree has a normal calibre. He is diagnosed with acute pancreatitis. Which of the following most likely incited acute pancreatitis in this patient? 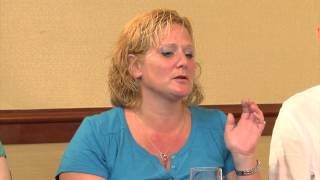 What symptoms did you experience that lead to your diagnosis of acute pancreatitis? 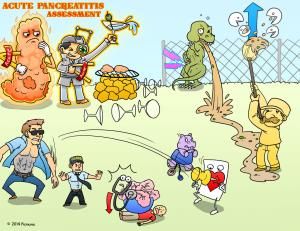 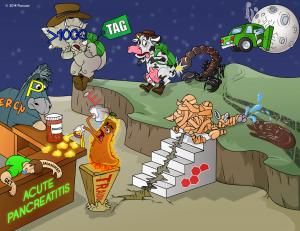 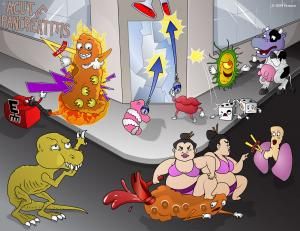 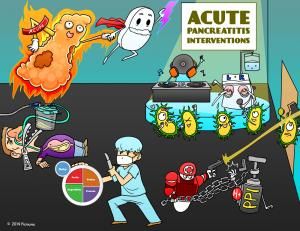 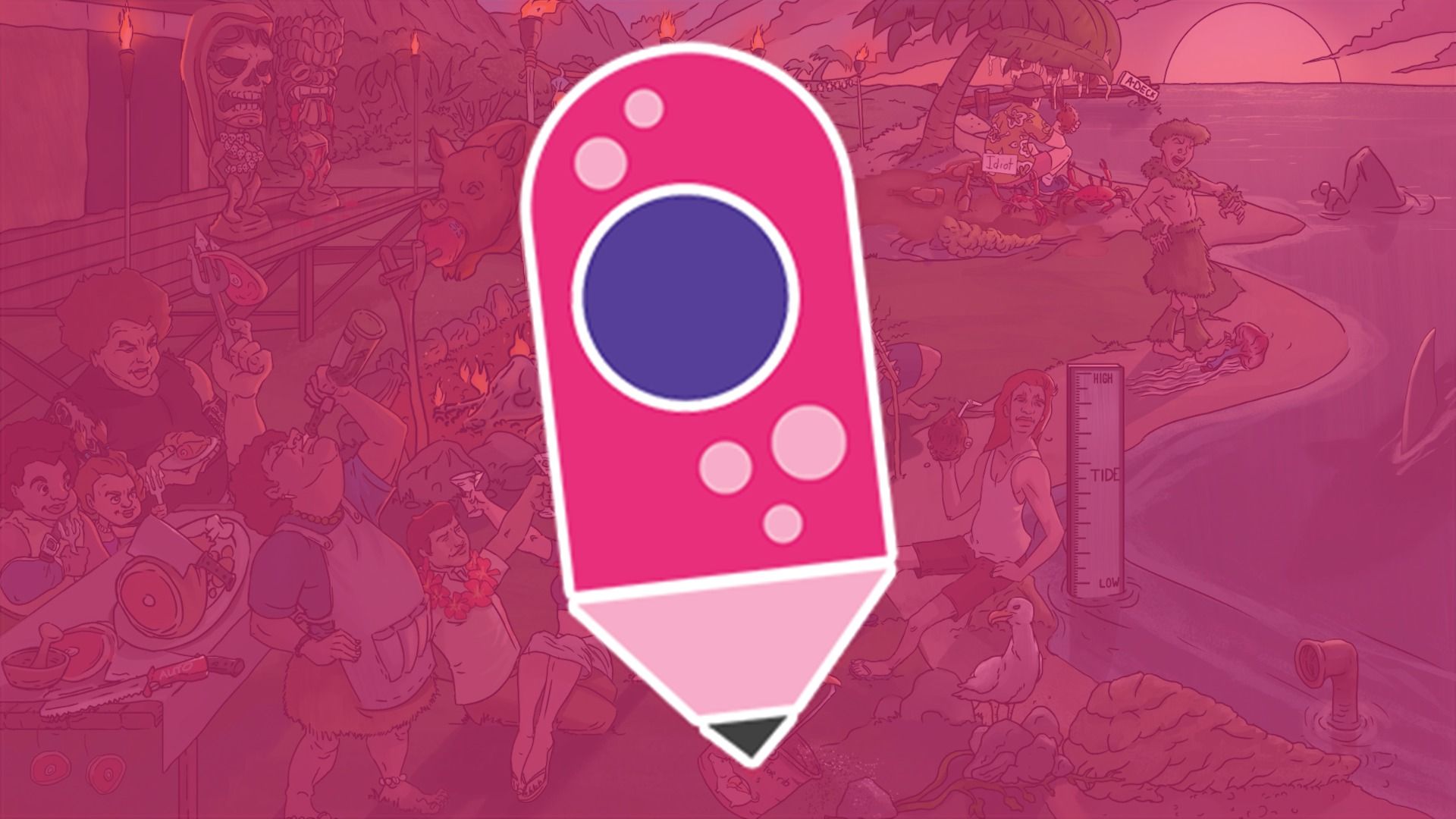 Acute pancreatitis is the sudden inflammation and hemorrhaging of the pancreas due to destruction by its own digestive enzymes—a process fittingly called autodigestion.

Most of the time the disease is actually relatively mild, but it can easily become severe, so it's critical to diagnose and treat it quickly.

The pancreas is a long, skinny gland the length of a dollar bill and is located in the upper abdomen, or the epigastric region, behind the stomach.

Normally, trypsinogen isn’t activated until it is cleaved by protease enteropeptidase which is found in the duodenum. But if trypsinogen and these zymogens become activated too early, then it can cause acute pancreatitis, and this might happen as a result of any injury to the acinar cells, or anything that prevents the normal secretion of the proenzymes into the duodenum.

At the cellular level, one consequence of this is that membrane trafficking becomes chaotic. Zymogen granules might fuse with lysosomes bringing trypsinogen into contact with lysosomal digestive enzymes.

With gallstones what happens is that they sometimes get lodged at the sphincter of Oddi which blocks the release of pancreatic juices, which is pretty similar to the alcohol-induced protein plug.

But the causes of acute pancreatitis are varied and most of the important ones can remembered with the mnemonic “I GET SMASHED”: where ‘I’ refers to unknown, or Idiopathic, causes; ‘G’ is obstruction by Gallstones, ‘E’ is Ethanol abuse; ‘T’ is a pancreatic Trauma, which is more likely if the trauma is the result of a puncture injury (like a knife wound not a punch); ‘S’ is the use of Steroids; ‘M’ is an infection of the Mumps virus, ‘A’ is the result of Autoimmune diseases; the second ‘S’ is the result of Scorpion sting—which is probably the most exciting item on this list and one of the more rare causes; ‘H’ is a cheat and stands for both Hypertriglyceridemia and for Hypercalcemia; ‘E’ is trauma from a procedure called an Endoscopic retrograde cholangiopancreatography or ERCP which is a technique used to diagnose and treat various biliary and pancreatic diseases; and finally ‘D’ stands for Drugs, like sulfa drugs, reverse-transcriptase inhibitors, and protease inhibitors.

So in acute pancreatitis, there is pancreatic tissue destruction that results from the proteases and inflammatory response of the body, and this can cause tiny blood vessels to become leaky and sometimes rupture.

Ultimately, all of the extra fluid or edema causes the capsule of the pancreas to swell, and unfortunately there can be some activation of lipases which go on to destroy the fat around the pancreas, or peripancreatic fat.

All of the digestion and bleeding can actually liquify the pancreatic tissue, a process called liquefactive hemorrhagic necrosis.