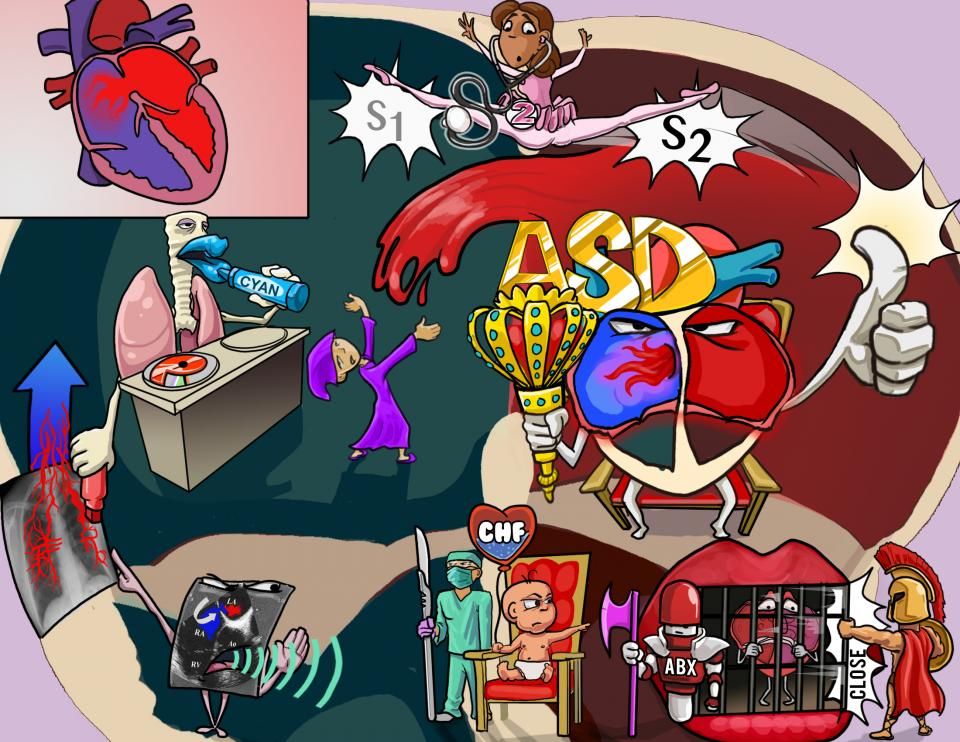 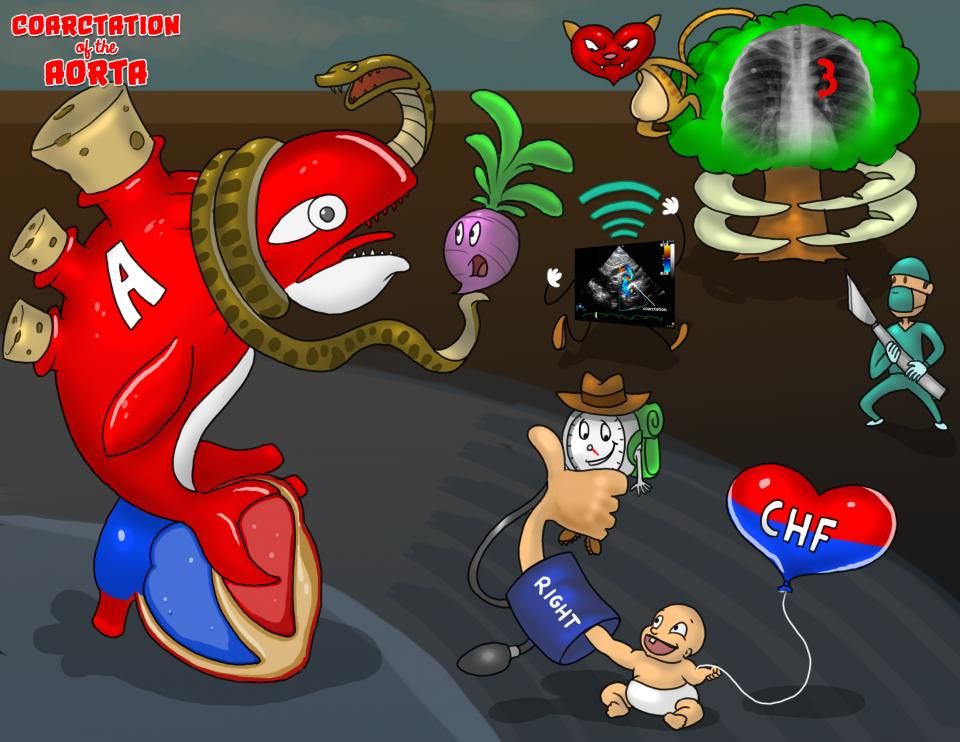 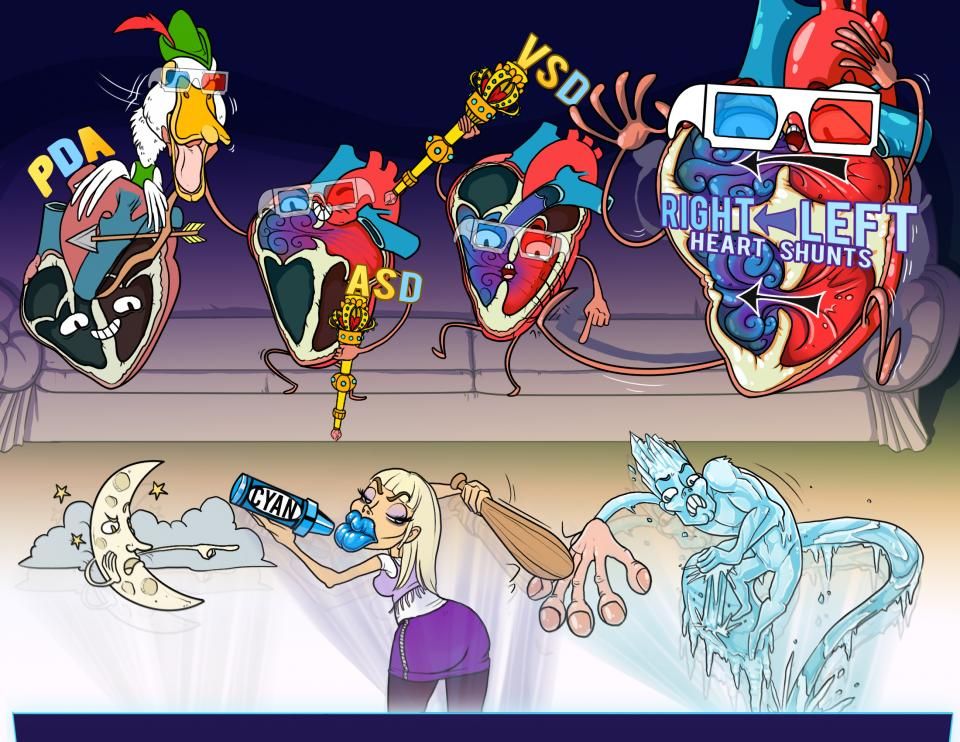 An important complication of both a patent foramen ovale and an atrial septal defect is the development of paradoxical emboli from the venous circulation. Say someone develops a deep vein thrombosis in their legs, from which an embolus breaks off and travels up to the right heart, but instead of going from the right atrium to the right ventricle and to the lungs, it passes through this atrial septal defect to the left atrium, then to the left ventricle and the systemic circulation. This may lead to the development of a stroke once the embolus travels up the carotid arteries and gets lodged somewhere, and this is specifically called a cryptogenic stroke.

Alright, now we go even higher up in the heart to look at patent ductus arteriosus, or PDA. Now in utero, the ductus arteriosus is the normal communication between the pulmonary artery and the aorta. The structure serves to shunt blood to the baby’s systemic circulation from the pulmonary artery to the aorta, so from right to left. This is important because the fetus’ lungs aren’t working yet and blood doesn’t really go there. This is all normal and it’s maintained by high levels of the vasodilator, prostaglandin E2, which is produced by the placenta and the ductus arteriosus. At birth, a bunch of things change. First, oxygen levels in the blood go up dramatically and the lungs become the main source of oxygenated blood. Soon after birth, the foramen ovale closes and prostaglandin E2 levels fall, causing the ductus arteriosus to close off and eventually become the ligamentum arteriosum. If it fails to close, it’s called a PDA. This might happen if for any reason oxygen tension is low. For example, if a baby is born prematurely, their lungs haven’t fully developed yet, and so they can’t maintain normal levels of oxygen in the blood and the ductus fails to close. Another high yield association is congenital rubella infection.

Okay, now in a PDA, blood moves from the aorta to the pulmonary artery, so left to right. This happens because the pulmonary vascular resistance decreases after birth, switching the direction of this shunt. So, all that oxygenated blood is going back to the lungs instead of to the systemic circulation. Now, for your test, keep in mind that in 90% of cases, PDAs occur as isolated defects, but in the remaining 10%, they are associated with other congenital heart defects. In fact, in certain cyanotic congenital heart defects, where the right ventricular outflow is obstructed like in Tetralogy of Fallot, or where the aorta and pulmonary artery swap locations, like in transposition of great vessels, PDA is necessary for survival. That’s because it forms a connection between the aorta and pulmonary artery that allows mixing of oxygenated and deoxygenated blood during fetal development.

Now, here’s where anatomy knowledge kicks in. The ductus arteriosus originates in the arch of the aorta, below where the subclavian artery branches, and remember the subclavian artery supplies the upper limbs. So, over time if a PDA is not corrected, babies eventually present with normal, pink upper limbs, but pale or even cyanotic lower limbs, which is called differential cyanosis. Okay, now comparing it to the septal defects, oxygen saturation will be increased only in the pulmonary artery, and will be normal in the right ventricle and atrium. On auscultation, a PDA produces a continuous “machine-like” murmur that’s best heard over the left clavicle. PDAs usually consist of treatment with indomethacin a non-steroidal anti-inflammatory medication which blocks the synthesis of prostaglandin E. If this fails, surgery is often necessary to close it.

Alright, now if any left-to-right shunt is not corrected, then a long-term complication called Eisenmenger syndrome can occur. Over time, constant shunting of blood to the right heart inc