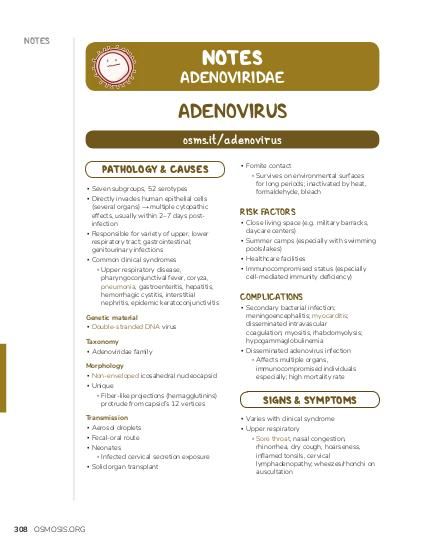 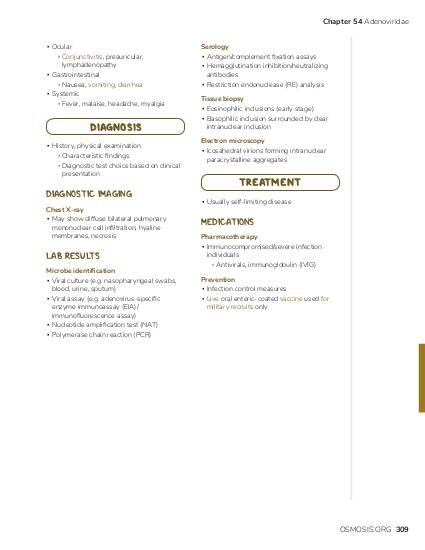 A 33-year-old female preschool teacher presents to an urgent care for evaluation of right eye discharge and foreign body sensation for the past 2 days. One week ago, the patient had a sore throat and low-grade fever that self-resolved after several days. Temperature is 37.0°C (98.6°F), pulse is 76/min, respirations are 11/min, blood pressure is 102/84 mm Hg. Right eye examination demonstrates a follicular appearance of the tarsal conjunctiva and profuse watery discharge. Cervical lymphadenopathy is also present. Which of the following is the most likely etiology of this patient’s condition? 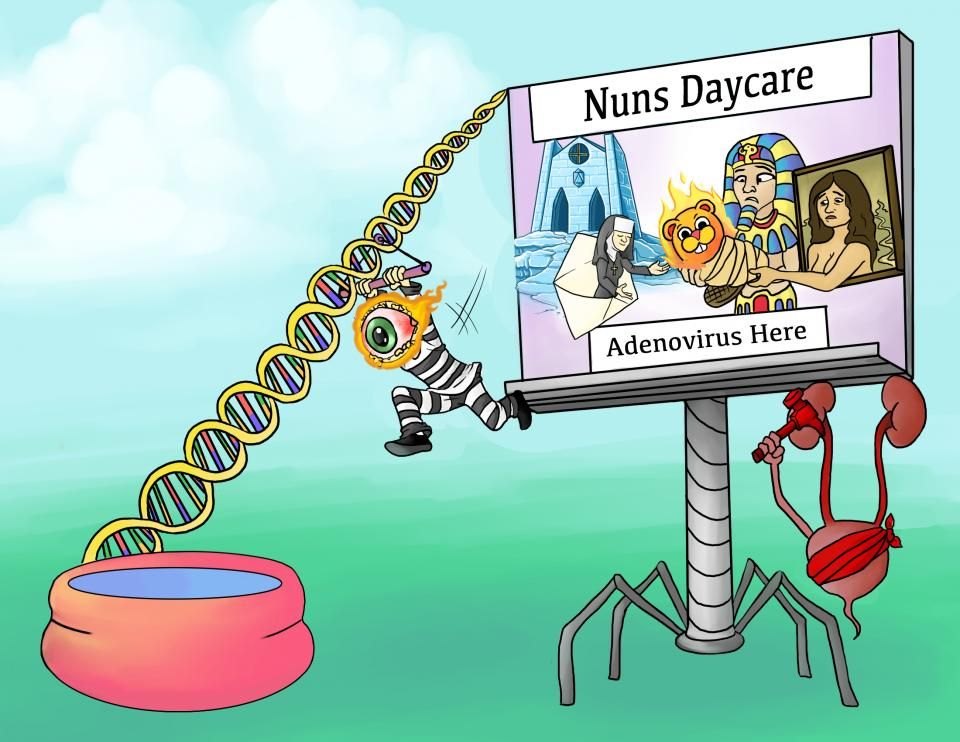 Adenoviruses are a group of viruses that cause respiratory, gastrointestinal, and genitourinary infections.

There are about 60 serotypes of the virus, divided into 7 subgroups, from A to G.

Common respiratory infections caused by adenoviruses include a sore throat, the common cold and pneumonia, whereas diarrhea is the most common gastrointestinal ailment.

Adenoviruses can also cause cystitis, which is the inflammation of the bladder, as well as eye conditions like conjunctivitis.

Adenoviruses are double-stranded linear DNA viruses surrounded by an icosahedral capsid, which is a spherical protein shell made up of 20 equilateral triangular faces.

Their capsid is unique among viruses because it has fiber-like projections from each of the 12 vertices of the shell.

Adenovirus is primarily transmitted by respiratory droplets when someone coughs or sneezes and by the fecal-oral route.

You can summarize it as the four Fs: fluids, fields, flies, and fingers. As a result, adenovirus can end up in food and drinking water.

Two less common modes of transmission are from mother to newborn via the cervical fluid in the birth canal, and following an organ transplant from a donor who has an adenovirus infection.

After entering the body, the virus heads for epithelial cells, like those that make up the respiratory, GI, or urinary mucosa, where it uses its fiber projections to bind to the coxsackie-adenovirus receptor on cell membranes. This allows it to get inside the cells.

Once inside, adenovirus has multiple cytopathic, or cell-damaging, effects, like blocking synthesis of cellular DNA and the production of proteins.

This results in cell death by lysis, or the breakdown of the cell membrane, which elicits an inflammatory response from the host.

This makes blood vessels in the infected zone dilate and become more permeable, allowing more leukocytes and fluid to enter local tissue to fight the infection.

This translates into the four cardinal signs of inflammation: heat, pain, redness, and swelling.

Some serotypes prefer the upper respiratory tract, causing infectious rhinitis, also known as the common cold, pharyngitis, which is the inflammation of the mucous membrane of the pharynx, or tonsillitis, when the tonsils are inflamed.

If the virus moves into the lower respiratory system, it can cause pneumonia.

Some serotypes prefer the epithelial cells of the GI tract, particularly those of the small intestine, causing gastroenteritis.

Other serotypes prefer the urinary tract, resulting in hemorrhagic cystitis, or inflammation of the bladder associated with bloody urine.

Lastly, adenovirus infection can affect the conjunctiva, which is the mucous membrane of the eye and inner eyelids, resulting in conjunctivitis, more commonly called pink eye.

A particular type of adenovirus infection called epidemic keratoconjunctivitis also causes preauricular lymphadenopathy, which is inflammation of the lymph nodes located right where the ear meets the cheek, because they receive the fluid that drains from the conjunctiva and the inner eyelids.

In most cases, adenovirus is confined to the epithelial cells of its original infection site, but it can sometimes break through the mucosa and spread to other parts of the body, causing a disseminated infection.

Adenovirus is a type of DNA virus that can cause respiratory infections, including the common cold, and also conjunctivitis or "pink eye." They can also cause more serious diseases such as pneumonia, bronchitis, and even meningitis, especially in immunocompromised individuals.

Adenovirus is spread through contact with respiratory secretions, such as saliva or mucus, from an infected person. They can also be spread through the fecal-oral route, and hand hygiene with water and soap or using sanitizers is the best way to prevent infection with adenovirus.