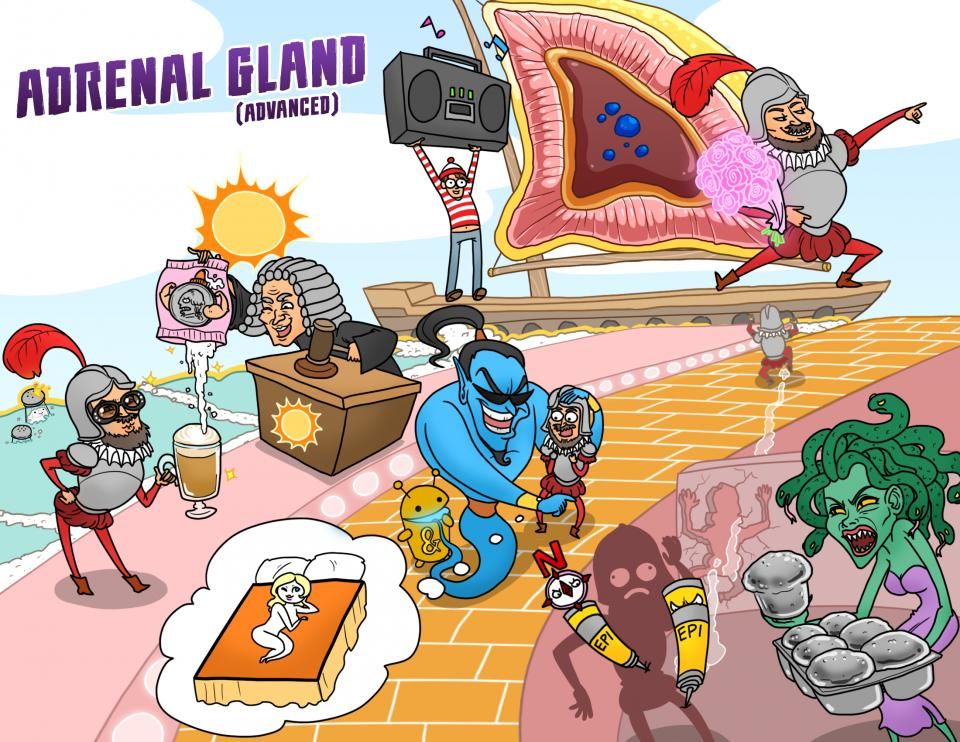 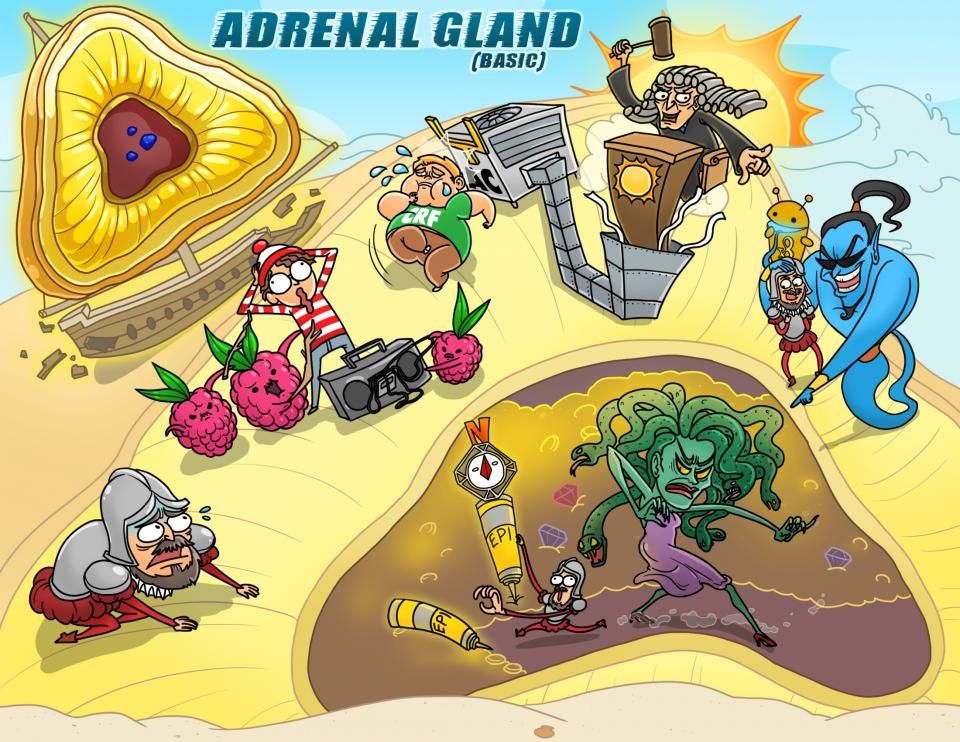 The adrenal glands are a pair of endocrine glands that are located just above or superior to the kidneys and are also in the retroperitoneal space of the abdominal cavity.

The left gland has a semilunar shape and the right gland is flattened and more triangular in appearance.

The adrenal glands are covered by a capsule made of thick connective tissue.

The cortex is the large outer region of the adrenal gland.

The cortex can be further divided into three zones that each secrete a different class of steroid hormones.

The adrenal medulla is the region that’s most centrally located and visibly distinct from the cortex.

The medulla is responsible for secreting the catecholamines: epinephrine and norepinephrine.

If we zoom in further, we can see some of the blood vessels of the adrenal gland.

Just outside of the capsule, there are small afferent blood vessels that are branches of the suprarenal arteries that supply blood to the adrenal gland.

And within the medulla, there are the large medullary veins that drain blood into the suprarenal veins.

Now, let’s take a closer look at the outermost layer of the adrenal cortex, the zona glomerulosa.

This layer is just beneath the capsule and comprises about 15 percent of the cortex.

The secretory cells are arranged in ovoid or glomerulus-like clusters that are separated by fibrous trabeculae that extends from the capsule.

The individual cells are either columnar or pyramidal with round nuclei, and a lipid-filled cytoplasm that gives the cytoplasm its pale “foamy” appearance.

These are the cells that are responsible for secreting aldosterone into nearby capillaries that can be found throughout this layer.

Moving deeper into the adrenal gland, the zona fasciculata is the largest of the three zones and comprises about 65 to 80 percent of the cortex.

In the bottom right of this high power image, we can also see a portion of the underlying zona reticularis.

Instead of clusters of cells, unlike the ones we saw in the zona glomerulosa, the secretory cells in this layer are arranged in long cords or columns of cells, often just one to two cells thick that are aligned perpendicular to the surface of the adrenal gland.

These cells have a larger amount of lipid-filled cytoplasm that results in a lighter stain and a “foamy” appearance.

In this image, we can see the sinusoidal blood vessels that run parallel to the columns of cells.

The secretory cells in this zone secrete glucocorticoids, mainly cortisol, but this zone will also secrete a small amount of androgenic sex hormones as well.

Continuing even deeper into the adrenal cortex, let’s take a look at the innermost layer of the cortex, the zona reticularis.