A 76-year-old male presents to the emergency department with altered mental status. The patient was found down for an unknown period of time by neighbors. His initial blood sugar was 45 mg/dL, for which he was given dextrose prior to arrival. He is unable to provide any medical history due to his mental status. Temperature is 38.3°C (101°F), pulse is 110/min, respirations are 21/min, blood pressure is 84/62 mmHg, and oxygen saturation is 92% on room air. Physical examination is notable for a confused male in moderate respiratory distress with rales at the right lower lobe. The patient is given two liters of intravenous normal saline, acetaminophen, intravenous ceftriaxone and azithromycin, and norepinephrine without improvement in his vital signs or clinical status. A repeat blood sugar is 37 mg/dL, and initial laboratory findings are demonstrated below:

Which of the following medications is indicated for management of this patient's clinical presentation? 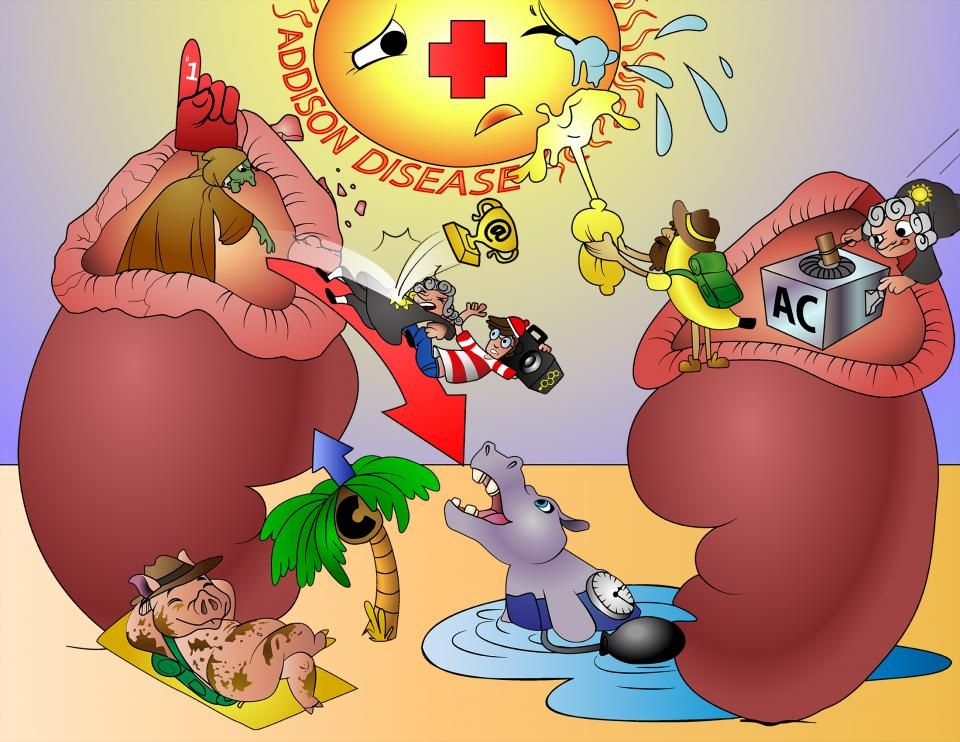 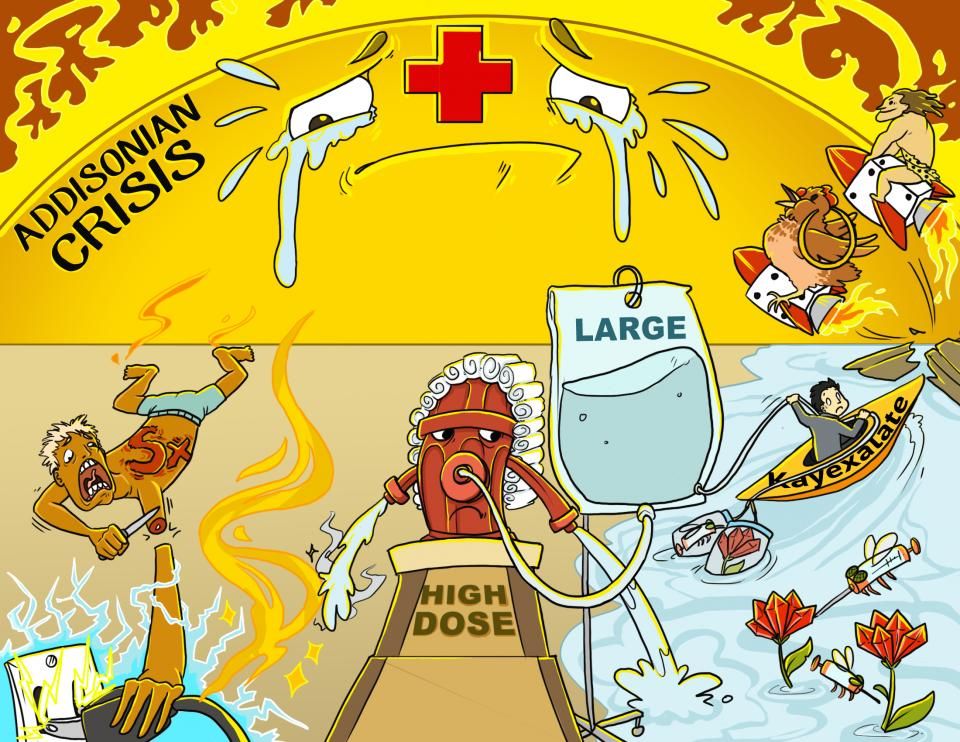 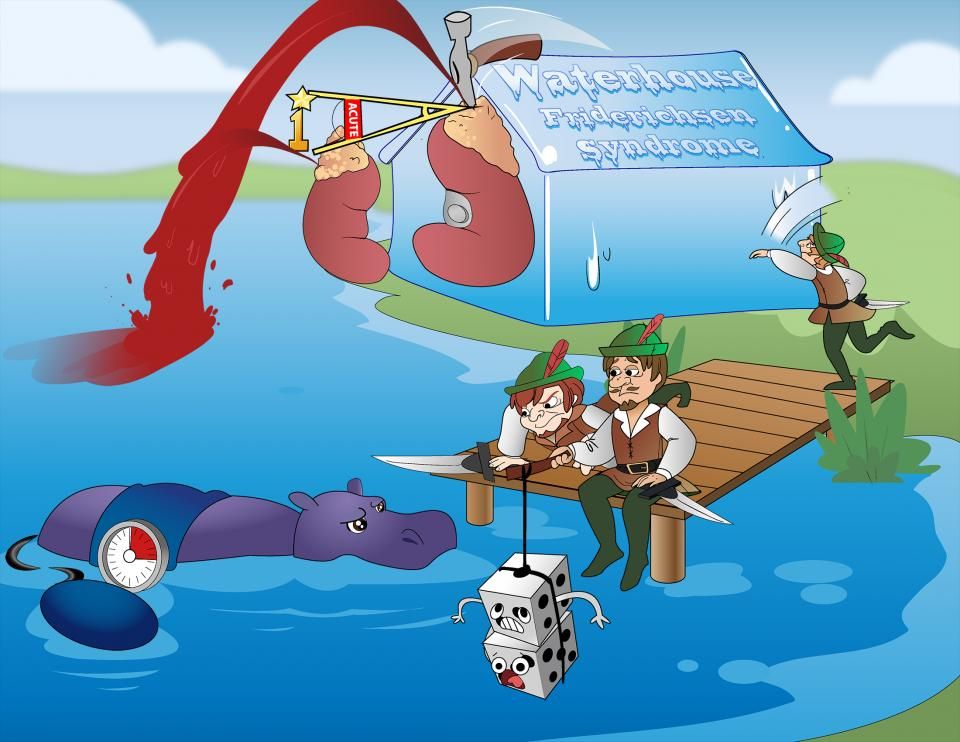 ACTH then stimulates the release of cortisol from the adrenal glands. Aldosterone, on the other hand, is the final product of a physiological chain called the renin-angiotensin-aldosterone system, or RAAS for short.

Renin is produced by the kidneys, so aldosterone production is actually independent of hypothalamic and pituitary stimulation. This is important, because adrenal insufficiency actually comes in three distinct flavors.

The most common cause for primary adrenal insufficiency in high income countries is autoimmune destruction of the adrenal gland. Another common cause can be due to tuberculosis, HIV, or disseminated fungal infections.

Finally, bilateral adrenal metastases from cancer somewhere else in the body, like the lungs, breast, or colon, can also cause adrenal insufficiency.

Then, there’s secondary adrenal insufficiency, which occurs due to insufficient pituitary ACTH secretion.

Since ACTH only stimulates cortisol production, in this case there’s a cortisol deficiency, but aldosterone levels are normal.

This can happen with panhypopituitarism, when the entire pituitary gland is affected, and all stimulatory hormones secreted by it are deficient.

Panhypopituitarism can be a result of any condition that affects the entire pituitary - like when the pituitary is affected by trauma or compressed by a large central nervous system tumor, either a pituitary tumor or another type of tumor growing in the vicinity.

Rarely, an isolated ACTH deficiency can occur as well, and causes may include autoimmune and genetic disorders, as well as medications like opiates and high-dose progestins.

And finally, there’s tertiary adrenal insufficiency which is due to insufficient CRH secretion - so once again, cortisol is deficient, but aldosterone levels are normal.

Similar to secondary adrenal insufficiency, this can also happen because of head trauma or intracranial tumors.

But the most common causes of tertiary adrenal insufficiency are sudden withdrawal of chronic glucocorticoid therapy and resolution of Cushing syndrome.

In both these cases, there used to be high levels of circulating glucocorticoids - either because of medication, or, with Cushing, because of a tumor.

This suppresses the hypothalamic production of CRH through negative feedback - so once medication is stopped, or the tumor is removed, individuals can have adrenal insufficiency for up to a year or longer, until CRH levels return to normal.

All three types of adrenal insufficiency can be acute or chronic. The acute presentation is called adrenal crisis, and rightly so - there’s usually a dramatic clinical picture, with hypotension or shock, vomiting, abdominal pain, fever, and mental status changes ranging from confusion to coma.

The chronic presentation is more insidious. Some symptoms are nonspecific, like fatigue, anorexia and weight loss, abdominal pain, and muscle and joint pain. However, there are some symptoms specific to each type of adrenal insufficiency.

For example, in primary adrenal insufficiency, excess ACTH causes excess of melanocyte-stimulating hormone, or MSH, which is a byproduct of increased ACTH production from a common precursor called proopiomelanocortin.

MSH increases melanin production, resulting in skin hyperpigmentation, especially around the oral mucosa, palmar creases and knuckles. Because aldosterone is also deficient, that can cause symptoms like salt craving.

With secondary or tertiary adrenal insufficiency, there’s no ACTH excess, so no hyperpigmentation, and aldosterone levels are normal, so there are no salt cravings.

However, there may be symptoms of the underlying causes, like headaches and visual abnormalities, or signs of hypopituitarism.

Most frequently, chronic symptoms may or may not go unnoticed, and then some sort of stress, like a serious illness, precipitates an adrenal crisis.

When the morning serum cortisol level is between 3 and 18 micrograms per deciliter, an ACTH-stimulation test is needed both to confirm the diagnosis, and differentiate between primary and central disease.

This is when the individual is given 250 micrograms of Cosyntropin, which is the synthetic analog of ACTH, and the serum cortisol before ACTH is given, and then taken again one hour later.

If they rise, that means the adrenals are responding properly to ACTH, so the issue is central, either with the pituitary or the hypothalamus. Treatment should be initiated as soon as the diagnosis of adrenal insufficiency is confirmed.

Finally, it’s important to determine the underlying reason for adrenal insufficiency. Addison’s disease should be suspected in all individuals with acute or chronic adrenal insufficiency, and can be diagnosed by identifying elevated levels of serum anti-adrenal antibodies, particularly anti-21-hydroxylase.

Both are inherited diseases that affect different endocrine glands. Type I is rarer, and it’s associated with Addison’s disease, hypoparathyroidism, and chronic mucocutaneous candidiasis, most commonly affecting the mouth, skin, and nails.

Also, most individuals have primary hypogonadism - which means the gonads don’t make enough sex hormones, possibly because of injury caused by autoantibodies directed against the gonads.

Symptoms of adrenal insufficiency include fatigue, muscle weakness, weight loss, darkening of the skin (hyperpigmentation), and low blood pressure. Addison's disease is a serious condition that can be life-threatening if not treated properly.