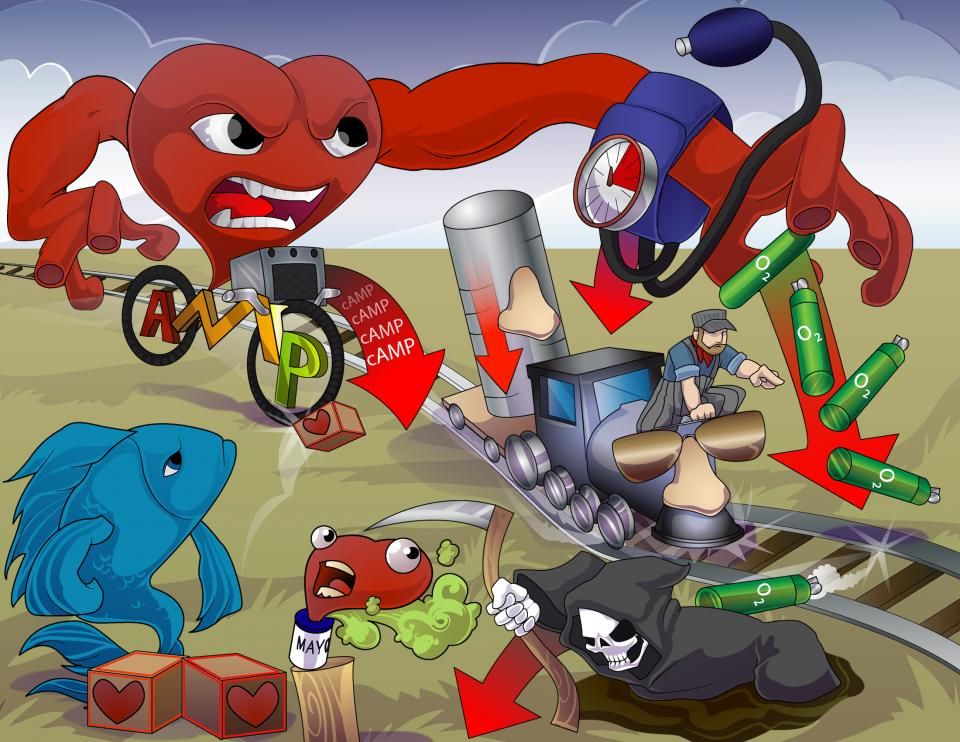 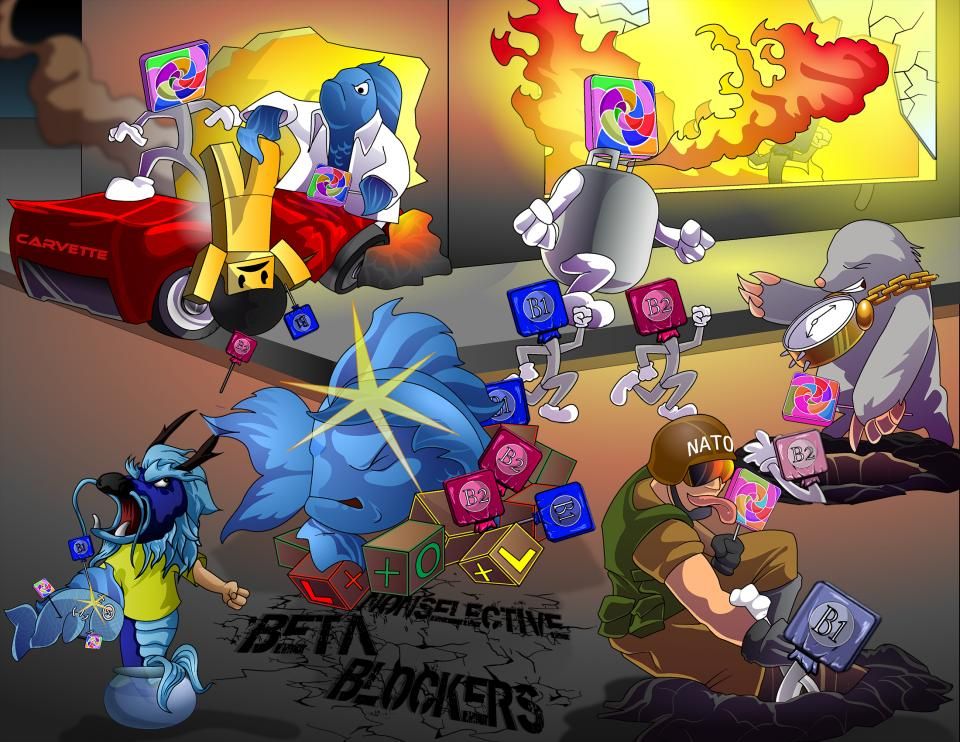 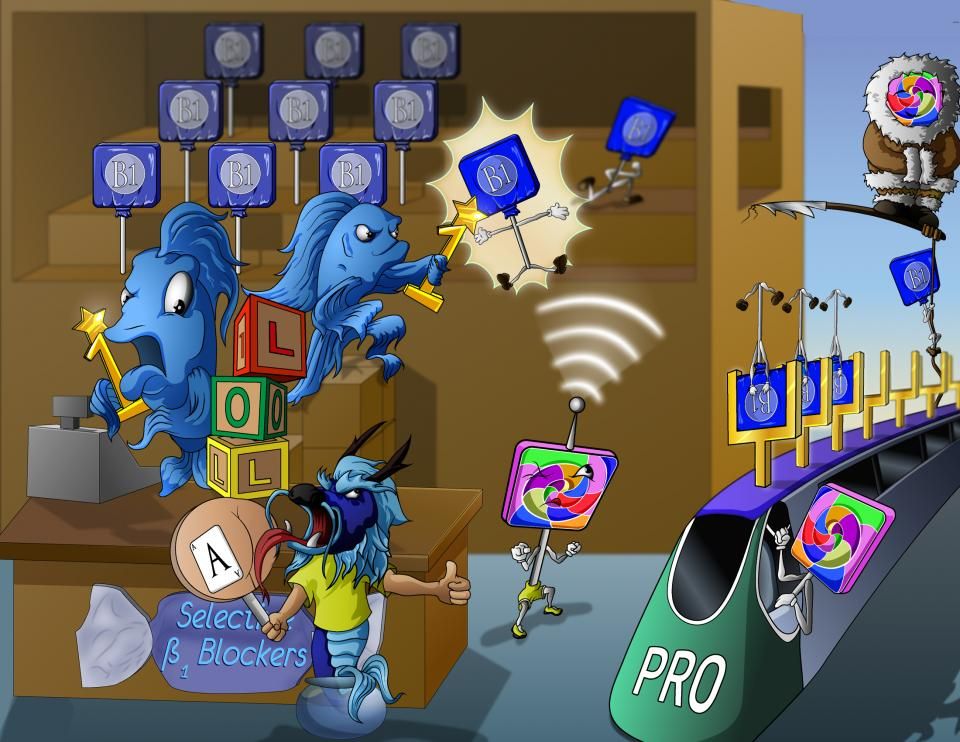 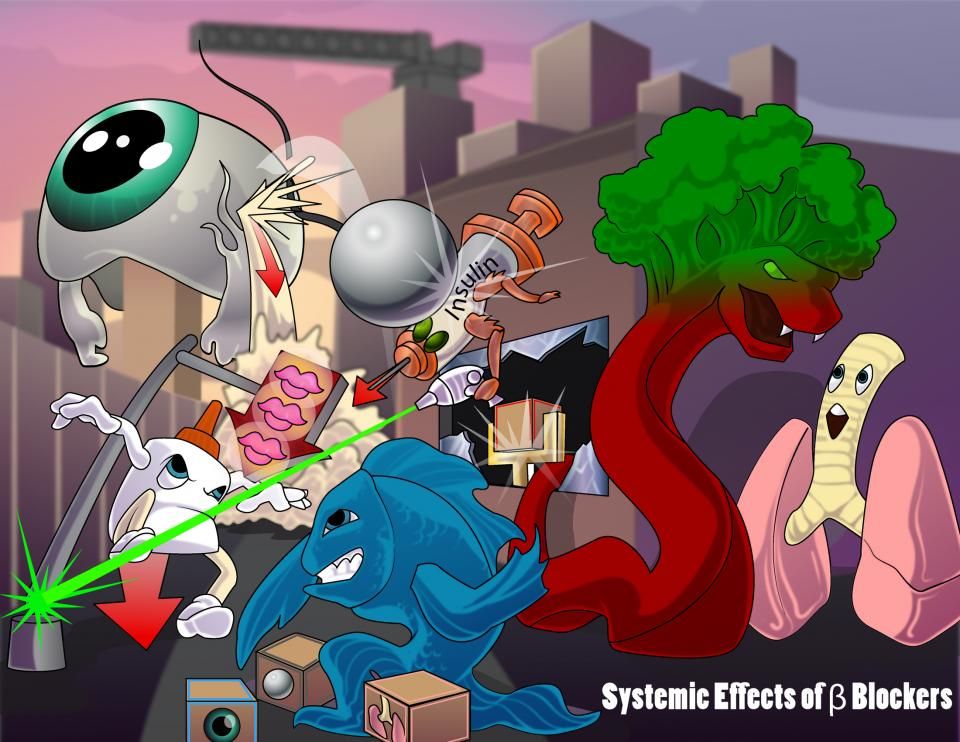 Alpha blockers and beta blockers are two types of postsynaptic anti-adrenergic medications that prevent their respective receptors from being stimulated by catecholamines, like norepinephrine and epinephrine.

Signals for the autonomic nervous system start in the hypothalamus, at the base of the brain. Hypothalamic neurons have really long axons that carry signals all the way down to the thoracic and lumbar spinal cord nuclei, where they synapse with preganglionic neuron cell bodies.

Let’s focus on beta receptors, which have two main subtypes: beta1 (β1) and beta2 (β2). Beta1 adrenergic receptors are mainly located in the heart, where they increase the heart rate and contractility, which helps pump out more blood.

Beta1 receptors are also found in the kidney, where they stimulate a very special kind of cell, called juxtaglomerular cells, to release renin.

Renin is a part of the renin- angiotensin- aldosterone system, which increases sodium and water retention by the kidneys and helps increase blood pressure.

Moving on to beta2 adrenergic receptors, these are found on smooth muscle cells in the walls of blood vessels supplying skeletal muscles and the brain, which leads to vasodilation and increased blood flow to these tissues.

In the lungs, beta2 adrenergic receptors cause bronchodilation, and that increases oxygen delivery to cells.

Finally, beta2 receptors stimulate an enzyme found on the surface of the cells lining capillary walls called lipoprotein lipase, which breaks down triglycerides into free fatty acids and cholesterol.

And based on the type of receptors they block, they are divided into two main categories - alpha blockers and beta blockers.

The first generation of beta blockers are non- selective blockers, meaning that they work as antagonists on both beta1 and beta2 adrenergic receptors.

So, here we have propranolol, timolol, nadolol, sotalol, and pindolol.

Actually, pindolol is not a pure antagonist, but a partial agonist. This means that, when bound to a beta receptor, it very weakly stimulates it, but at the same time, it prevents binding and stimulation by the more potent catecholamines.

This is known as intrinsic sympathomimetic effect. Or more simply, pindolol has the same but weaker effects compared to the other first generation beta blockers.

Now, by blocking beta1 receptors in the heart, these medications decrease the heart rate and contractility, which lets the heart work less hard, and pump less blood out, resulting in a drop in its oxygen and energy demands, as well as a drop in blood pressure.

At the same time, beta1 blockade in the juxtaglomerular cells in the kidney decreases renin release, which in turn decreases angiotensin II and aldosterone, letting more sodium and water be lost in the urine and lowering the blood pressure even more.

Okay, but by blocking beta2 receptors as well, they also cause some vasoconstriction of blood vessels supplying the skeletal muscles and the brain.

This is typically very mild though, and doesn’t have a significant effect on blood pressure.

In the brain, in fact, beta2 receptors in blood vessels are only reached by propranolol, which is lipid- soluble enough to penetrate the blood- brain barrier and induce some degree of vasoconstriction.

Now, moving on to the lungs, blocking beta2 receptors causes bronchoconstriction, or narrowing of the respiratory airways, which obstructs airflow, and lets in less oxygen.

In the gastrointestinal tract, beta2 blockade speeds up motility.

In the eye, aqueous humor production decreases, so intraocular pressure or the pressure within the eye falls.

Now in the liver, less glucose gets released in the bloodstream, and the pancreas releases less glucagon; so this results in a diminished blood glucose level.

And finally, inhibition of lipoprotein lipase leads to the accumulation of triglycerides in the blood.

Alright, so looking at the indications of non- selective beta blockers, they are widely used in the treatment of hypertension; and coronary artery disease, in the form of angina pectoris or a heart attack.

It has also been suggested that beta blockers slow down the progression of congestive heart failure, or CHF for short.

This remains controversial though, since individuals with heart failure often rely on sympathetic drive to maintain some degree of heart function.

So in this situation, beta blockers might actually make things worse, especially in a situation of acute CHF exacerbation.

Adrenergic antagonists are a type of drug that blocks the action of adrenaline in the body. Adrenaline is a hormone that is released in response to stress or excitement, and it causes the heart rate to speed up and the blood vessels to narrow.

Beta-blockers are a type of adrenergic antagonist that blocks the sympathetic activation of Beta-adrenergic receptors. Beta-blockers work by blocking the action of adrenaline, which is responsible for the body's fight-or-flight response. This makes them ideal for treating conditions where the body's natural response to stress is harmful, such as high blood pressure and heart arrhythmia.