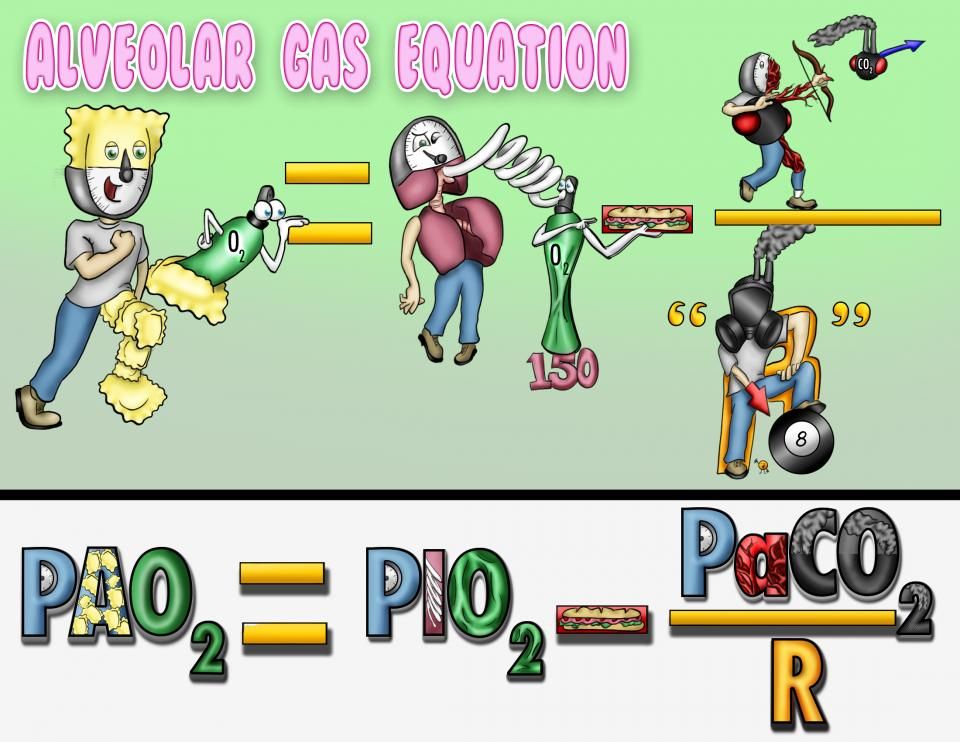 When we breathe in, oxygen-filled air from the environment enters through the nostrils, goes through the airways, and finally reaches the alveoli, the tiny air-filled sacs in the lungs where oxygen finally moves into the blood.

The amount of oxygen in the alveolus equals whatever enters from the airways minus whatever moves into the blood, and that relationship is the alveolar gas equation.

The total pressure of the air in the alveoli is equal to the atmospheric pressure outside, Patm.

But unlike atmospheric air, the air inside the alveoli gets saturated with water vapor after travelling through the moist airways.

The partial pressure of water vapor is Pvapor.

So, rearranging, the total alveolar pressure exerted from all of the gases except water vapor is equal to (Patm- Pvapor).

Now, let's take this mixture of gas particles, red being oxygen and blue being CO2, the partial pressure of one of the gases is proportional to the fractional concentration of the gas in that mixture, which is a fancy way of saying the fraction of that gas molecule to all the gas molecules, so in this case CO2 would have a fractional concentration of 0.3, since it accounts for 30% of the gas molecules, and O2 would be .7, since it accounts for the remaining 70%.

The reason these are proportional to the partial pressure is that more molecules are more likely to bounce around and hit the container.

With our example, we see way more O2 balls bouncing off the container as CO2 balls, simply because there are more of them, every time one of these bounces, they exert pressure!

So, based on that, you’d expect the O2 to exert more pressure than the CO2—proportional to their fractional concentrations! How much?

In calculating how much oxygen is consumed by the body, we make use of the respiratory quotient, abbreviated as R.

The value of R depends on our diet, and for a person consuming a healthy mix of carbohydrates, proteins, and fats, R is around 0.8.

Alveolar gas equations are a set of mathematical equations used to calculate the alveolar oxygen partial pressure. It is used extensively in medicine and physiology and is considered to be one of the most important tools in understanding how the alveolar gas exchange works.