A 65-year-old man comes to the clinic for evaluation of chronic exercise intolerance. He has to stop and catch his breath after walking two blocks or climbing 2 flights of stairs. The patient has a 55-pack-year smoking history. He undergoes pulmonary function testing and the results are shown below. Which of the following best represents the total volume of gas in this patient’s airways that does not participate in gas exchange? 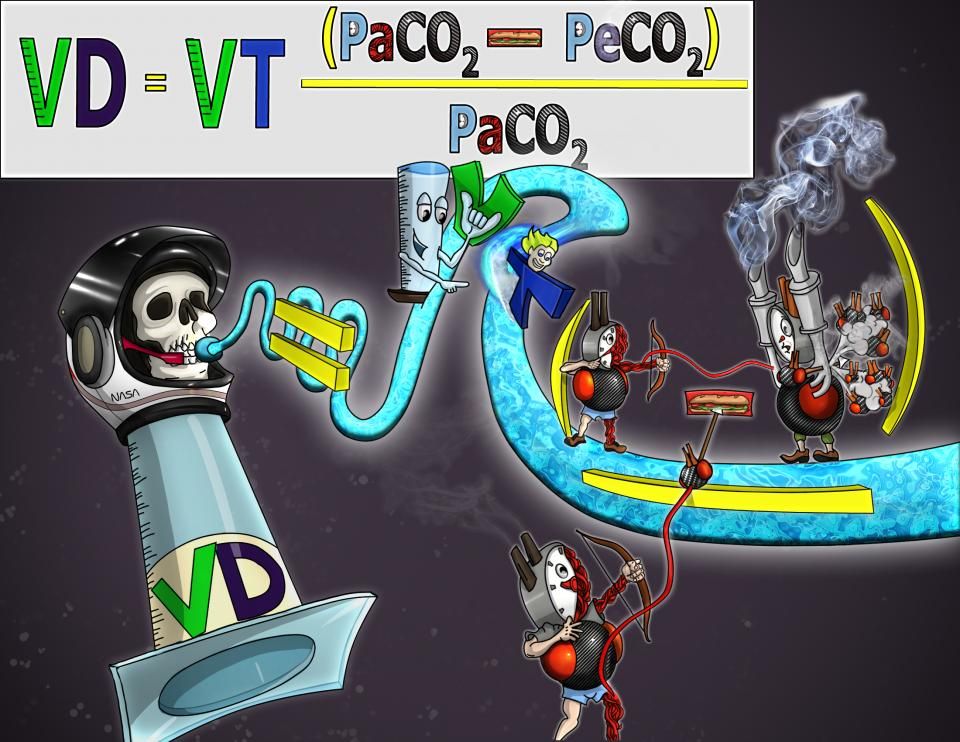 But as it turns out, not all the air that we breathe in, ends up participating in gas exchange.

As we inhale, air enters the nasal cavity or the oral cavity and travels down the trachea and then splits into the two mainstem bronchi and enters the two lungs.

Within the lungs, the bronchi divide into progressively smaller and smaller bronchioles until air gets down to tiny thin-walled air-sacs called alveoli which are surrounded by tiny capillaries. This is the site of gas exchange.

So, the part of the respiratory tree prior to these alveoli, starting from the nose, or the mouth, right up to the tiny terminal tiny bronchioles without these alveoli, merely acts to conduct or transport air to the alveoli. This part is known as the conducting zone and it does not take part in gas exchange.

The volume of air contained in this conducting zone is known as anatomic dead space.

‘Dead’ sounds kind of ominous but it basically reflects the fact that this air is as good as dead to the body, because you can’t extract oxygen from it.

‘Anatomic’ means that this dead space is inbuilt within the anatomy of the respiratory system and doesn’t really change; no matter what we do, we cannot ever use this air for gas exchange.

A normal person, when breathing quietly without any active effort, takes in about 500 ml or half a liter of air - this is the tidal volume, represented by these three blocks.

Almost a third of this tidal volume or about 150 ml is trapped in this anatomic dead space, and the remaining 350 mL or so is used for gas exchange.

OK so let’s go way back to when an infant is born, at this point there’s no air inside the lungs, so the alveolar air sacs are completely collapsed.

As the baby takes its first breath, new oxygenated air rushes in through the respiratory tree and inflates the alveoli, but about a third of the air is left in the anatomic dead space, shown in orange, but we’ll keep it half purple since it’s still oxygenated air.

Those purple blocks then participate in gas exchange, converting them to old deoxygenated air, shown in green.

As the baby starts to exhale air for the first time, this dead space air which did not participate in gas exchange is the first to be exhaled out, and the conducting zone gets filled with air from the alveoli which has already taken part in gas exchange and given its oxygen to the body.

During the next inhalation, it’s this old green deoxygenated air that re-enters the alveoli first, and it’s joined by fresh oxygenated purple air from the new tidal volume.

The dead space gets filled with fresh air that has just been breathed in.

This goes on for every subsequent breath cycle throughout the life of the person.

So to gauge how effectively gas exchange is taking place in the lungs, it’s important to time it just right, and take an air sample from the dead space at the end of exhalation.

Now, so far, we’ve been assuming that the air that manages to reach the alveoli is able to participate in gas exchange. Unfortunately, that’s not always the case.

Some alveoli may have an inadequate blood supply, so when these alveoli get filled with air fresh purple air, they are well-ventilated, but not well perfused. This is known as a ventilation-perfusion defect.

In this situation, the oxygen in the purple air doesn’t functionally make its way into the blood, so some of this air also ends up being dead space air, but this time we call it alveolar dead space, and together we call these the physiologic dead space.

The term ‘physiologic’ refers to all the air that is physiologically inaccessible to the body due to anatomic and functional reasons.

Okay so now that one block of accessible fresh purple air gets exchanged, and then this gets exhaled, we can actually now use some fancy equations to calculate the volume of physiological dead space of the exhaled air, which we’ll say is V sub D for dead space, but first there are a couple important assumptions.

First, we assume that there’s no CO2 in the environment air, the actual figure is about 0.04%, so zero is not too far off the mark, and remember that this is the purple boxes here since that air came from the environment but was never exchanged.

Assumption number two is that none of the CO2 was contributed from the dead space, so based on assumptions 1 and 2, the purple and orange blocks have zero CO2.

That leads to the third assumption, all the CO2 in exhaled air comes only from functioning alveoli, i.e. this last green block.

Now, if you take a volume in mL and multiply by the concentration in say mg / ml, then you end up with the total amount of that something M, in this case in mg.

Now, that means that the total amount of CO2 in the alveoli is the volume VA times the concentration, CA.