Assessments
Anatomy and physiology of the male reproductive system 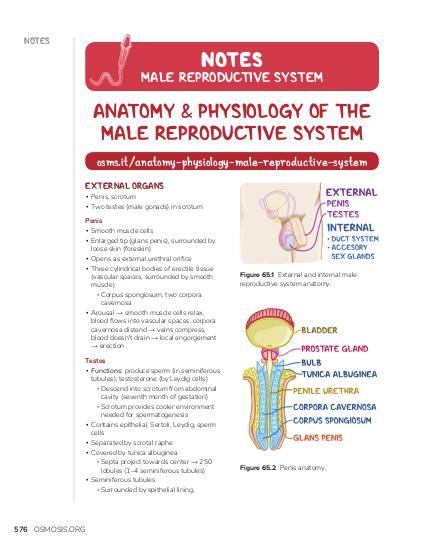 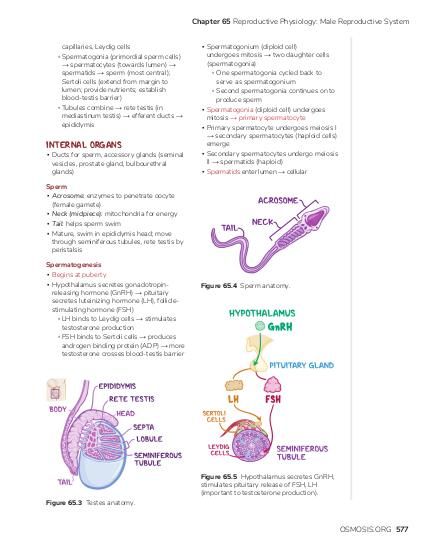 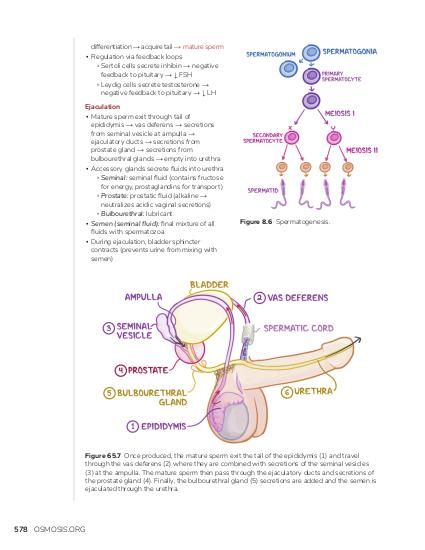 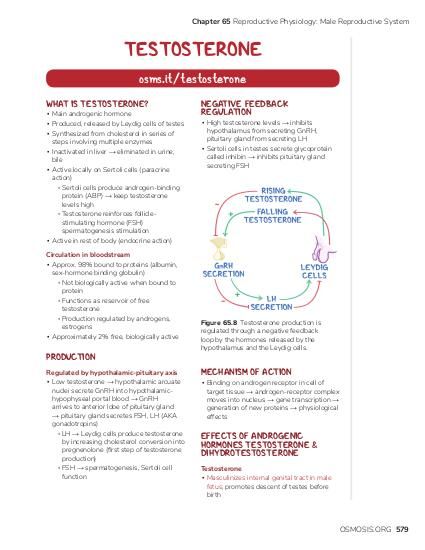 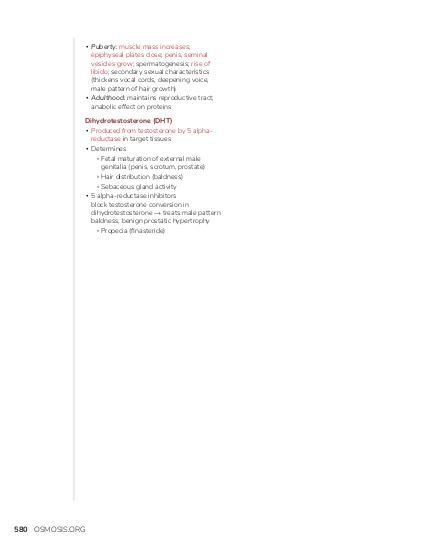 Anatomy and physiology of the male reproductive system

A 50-year-old man comes to the emergency department because of injuries after falling off a ladder. He describes falling about 5 feet off the ground and suffering blunt trauma to his perineum and penis, resulting in immediate pain lasting 5 minutes. Following the injury, the patient experienced burning with urination and noted large amounts of hematuria. He denies pain with ambulation and does not recall any trauma to the pelvis during the fall. Genitourinary examination reveals blood at the urethral meatus. Which of the following is the most appropriate initial step in management? 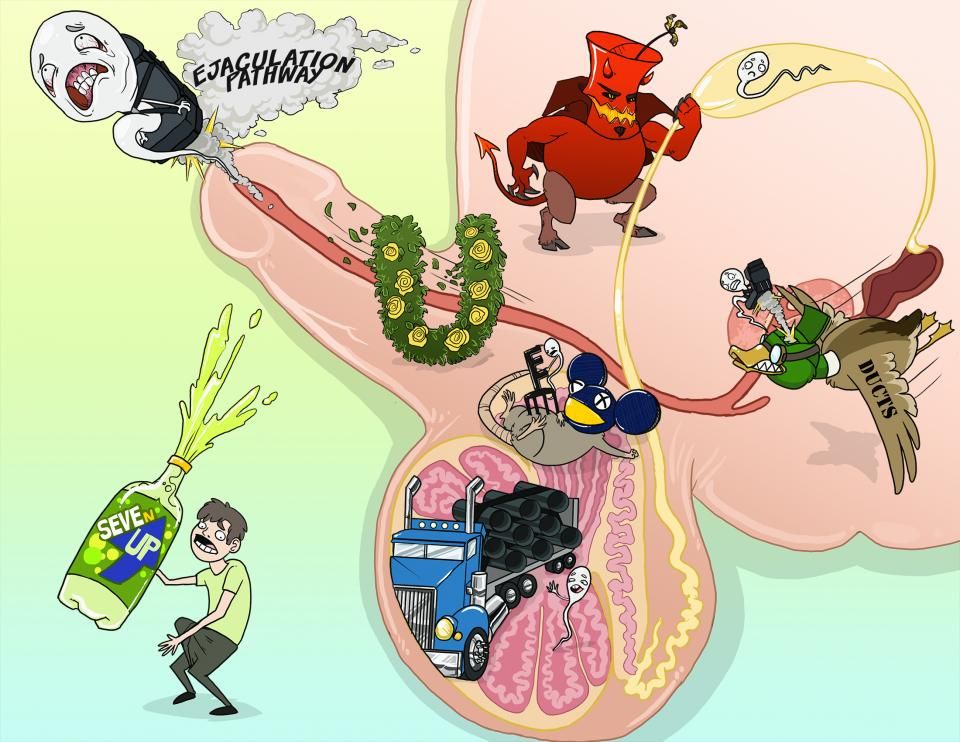 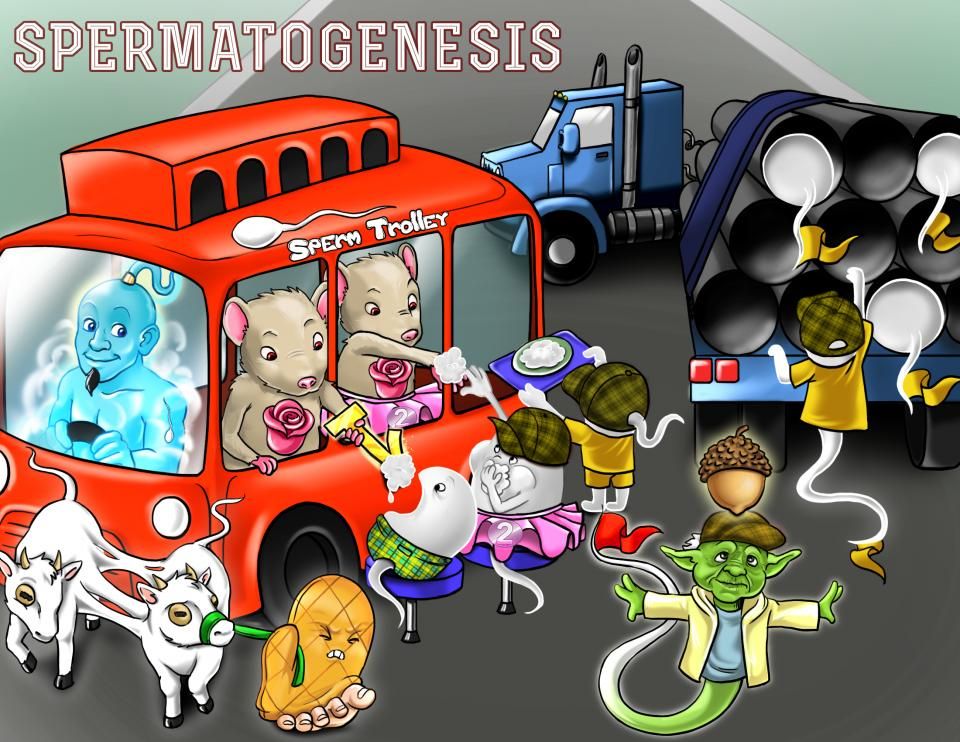 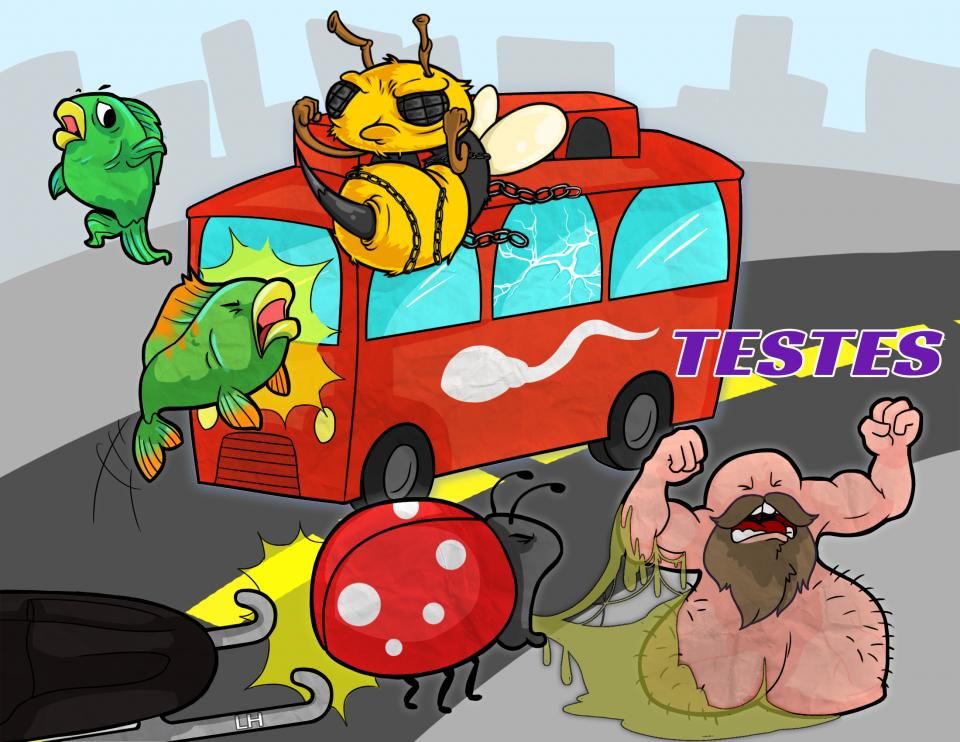 Anatomy and physiology of the male reproductive system exam links

The male reproductive system includes internal and external organs and structures that help with reproduction.

The external male sex organs are the penis, and below it, the scrotum.

Inside the scrotum, there are the two testicles, or testes - the male gonads.

Inside the body, there’s a system of ducts through which sperm travel during ejaculation, as well as the male accessory sex glands, which secrete nourishing fluids for the travelling sperm.

Now, the testes are two organs the size of small plums, that are located in a skin and muscle pouch called the scrotum.

This pouch has a line called the scrotal raphe running down the middle, which separates it in two chambers - one for each testis.

The scrotum hangs outside of the body but has several layers of muscles and fascia that keep the testis temperature about 3 degrees lower than body temperature, which is perfect for sperm production.

When it’s cold outside, the scrotal skin wrinkles and the scrotum elevates to bring the testes closer to the body to warm up.

When it’s warm outside, the scrotal skin loosens up and the scrotum lowers the testes away from the body, and heat is released through sweating.

The testes themselves are covered on the outside by the tunica albuginea - a white, fibrous layer.

If we slice a testis open and look inside - sorry for the cringe moment, guys - we can see that the tunica albuginea, sends fibrous projections called septa towards the center of the testis.

These septa partition each testis into about 250 lobules, and each lobule contains at least one and up to four seminiferous tubules, which is where sperm is synthesized.

The seminiferous tubules come together and form a single straight tubule that exits the lobule, and enters a small network of tubules called the rete testis.

The rete testis are a small network of ducts that split up and come together again - like catacombs, and these are located in the center of the testes - a region called the mediastinum testis.

Once the sperm make it through the rete testes, they go through the efferent ducts to the epididymis.

The epididymis is a comma-shaped organ that also has a head, a body, and a tail, and curves along the posterior edge of each testis.

Now let’s zoom in on a single seminiferous tubule - which is the “sperm factory”.

A seminiferous tubule has a thick wall of epithelial cells that surround a fluid-filled lumen - a bit like a garden hose.

Outside the tubule, there’s connective tissue with capillaries, as well as Leydig cells - which produce testosterone.

The wall of the tubule is made up of three kinds of cells: at the periphery, there’s the spermatogonia - which are the primordial sperm cells that begin dividing over and over in puberty, and give rise to male gametes.

Next, there are the spermatocytes - which migrate towards the lumen as they differentiate into sperm.

Finally, there are Sertoli cells - which are large cells that extend from the margin all the way to the lumen of the tubule.

Sertoli cells provide nutrients to developing sperm cells, and contribute to the blood-testis barrier by only allowing certain molecules, like testosterone, in the seminiferous tubule.

Sperm production, or spermatogenesis, begins in puberty under the command of the hypothalamus.

The hypothalamus is a part of the brain that secretes gonadotropin-releasing hormone, or GnRH.

That GnRH travels to the nearby pituitary, which secretes two hormones of its own - luteinizing hormone, or LH, and follicle stimulating hormone, or FSH, that reach the gonads.

Before puberty, GnRH and, in turn, FSH and LH are secreted in low, constant amounts.

LH binds to Leydig cells, and stimulates the production of testosterone, whereas FSH binds to Sertoli cells, making them produce androgen binding protein - or ABP, for short - which allows more testosterone to cross the blood-testis barrier and enter the seminiferous tubule.

So, it’s the increased concentrations of FSH, LH, testosterone that really gets spermatogenesis going.

Spermatogenesis starts with the spermatogonia, which are diploid cells - so they have 46 chromosomes, two of which are sex chromosomes, an X and a Y.

For diploid spermatogonia to form haploid gametes, that only have 23 chromosomes, they first undergo mitosis, and then undergo meiosis 1 and 2.

The primary spermatocyte slowly moves towards the lumen of the seminiferous tubule, passing between two Sertoli cells that nourish it.

The primary spermatocyte enters meiosis I, and emerges with 23 chromosomes each, one of which is either an X or a Y chromosome.

Secondary spermatocytes enter meiosis 2, which also have 23 chromosomes, but only one chromatid - so the right number of chromosomes and the proper amount of DNA.

Spermatids enter the lumen of the seminiferous tubule and undergo spermiogenesis - which is when they acquire a tail, and turn into sperm.

It takes roughly 2 months for spermatogonia to develop into sperm, and this process is regulated by various hormones.