A 44-year-old man presents to his primary care physician with worsening left shoulder pain. He can no longer do bench presses or shoulder presses at the gym due to weakness and pain. The pain is primarily located over the lateral shoulder, is worse at night, and is preventing him from obtaining adequate rest. Past medical history is otherwise unremarkable. He has no history of recent trauma or surgeries to the left shoulder. The patient subsequently undergoes a MRI of the left shoulder, which reveals the following:


Image reproduced from Radiopedia
Which of the following physical examination maneuvers is most likely to yield a positive test, given this patient’s clinical findings? 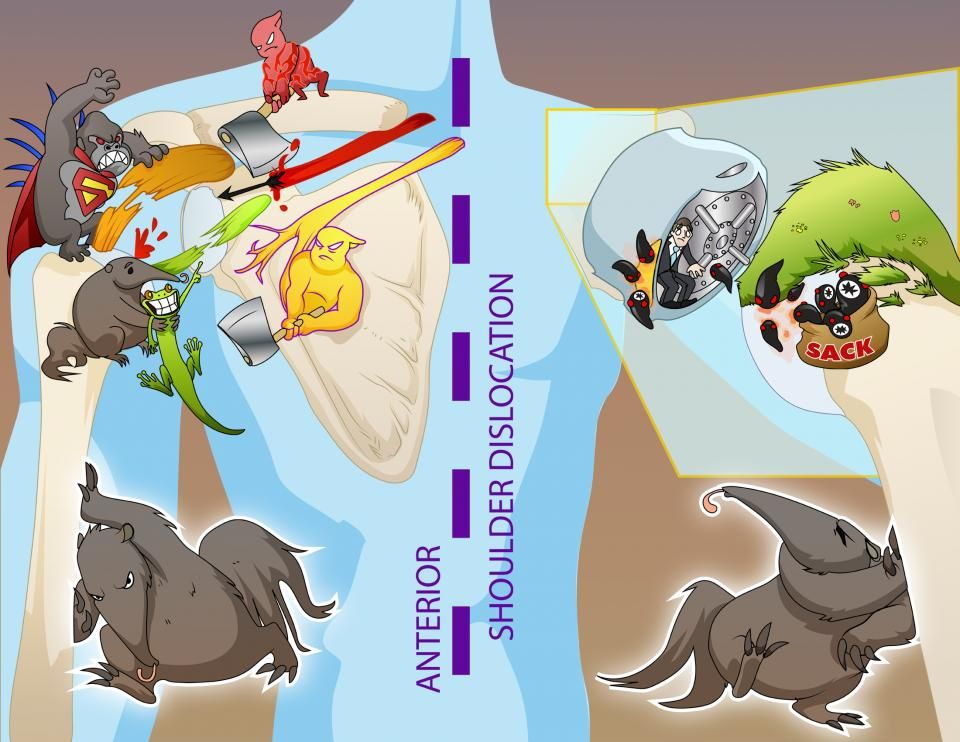 Our upper limbs are complex structures.

They’ve got bones, muscles, fascia, nerves and blood vessels, and everything in between.

Our upper limbs are prone to injury, and oftentimes even a small injury can have a huge functional deficit as we are so reliant on our upper limbs in everyday life.

One of these commonly injured areas is the shoulder region.

Ok, now, let’s have a look at the injuries of the clavicle.

Because of its subcutaneous position, the clavicle is prone to fractures, which are usually the result of direct or indirect trauma.

An example of direct trauma is falling directly on the shoulder.

Indirect trauma, on the other hand, may occur when falling on an outstretched hand, and the force of impact is transmitted through the bones of the forearm and the arm to the shoulder, which can result in a clavicular fracture.

So with clavicular fractures, the medial fragment is usually pulled up by the sternocleidomastoid muscles, which can be apparent to the naked eye and palpable.

At the same time, the trapezius muscle is having trouble holding the lateral fragment up, because of the weight of the limb, so the shoulder drops.

And since the two fragments may glide under each other, the clavicle is also shortened.

Additional features may signal complications of a clavicle fracture.

For example, if the skin above the fracture seems to be tenting, meaning it looks like a tent, that suggests the fracture may become an open fracture in the future, and warrants surgical stabilization.

Alright, now, another thing that can happen in this region is an acromioclavicular dislocation, also called a “shoulder separation”.

Just like the name says, the clavicle and acromion process separate, usually because of a direct blow to the shoulder, or a fall landing directly on the shoulder joint.

In most cases, the dislocation is mild if the acromioclavicular ligament is just stretched or partially torn.

If the coracoclavicular ligament tears, the shoulder can completely separate and drop due to the weight of the upper limb.

If the joint capsule also tears, the acromion process may slip under the clavicle.

Clinically, there is swelling of the acromioclavicular joint, and pain that worsens with overhead arm movement and lying on the affected side.

You can also get osteoarthritis of the acromioclavicular joint, often the result of a previous injury.

To test pathology of the AC joint, the scarf test may be used, where the arm of the affected joint is flexed and adducted across the chest and neck, similar to a scarf, producing pain over the AC joint.

Now, right below the acromioclavicular joint, there’s the glenohumeral, or shoulder joint, which is a ball and socket joint, where the ball is the humeral head, and the glenoid cavity of the scapula is the socket.

The joint is supported by ligaments, and surrounded by the rotator cuff muscles, commonly remembered with the SITS mnemonic: supraspinatus, infraspinatus, teres minor, and subscapularis.

The glenohumeral joint is freely movable, which lets us make complex movements like throwing a baseball, but this also means that the joint is highly unstable.

Anterior dislocations are more common in young people, and they occur because of a direct blow, or a fall on an outstretched arm.

Think of a soccer goalkeeper jumping to catch the football, arms outstretched, and landing on his side.

This usually happens when the arm is externally rotated and abducted, and when there is a hard blow to the humerus, the humeral head gets pushed down towards the weaker inferior part of the joint capsule.

If it tears or weakens, the humeral head goes inferiorly, and the strong flexors and adductors pull it forward.

Clinically, the shoulder is visibly displaced and may appear “squared off” since the curvature from the deltoid muscle is lost.

One possible complication to be aware of is damage to the axillary nerve, which is located inferior to the glenohumeral joint.

Axillary nerve damage causes a loss of sensation over the lateral part of the proximal arm and atrophy of the deltoid muscle resulting in weakness of abduction of the shoulder.

Posterior dislocations, on the other hand, are rare, and they usually happen because of forceful muscle contraction during an electric shock or seizure.

One issue that’s commonly associated with a shoulder dislocation is a rotator cuff injury.

But rotator cuff injuries may also occur on their own.

Degenerative injuries of the rotator cuff occur in the context of repetitive stress, such as in sports like baseball or tennis, or occupations that require repetitive overhead movements.

This causes a lot of inflammation and an accumulation of small tears in the tendons overtime.

The most commonly injured tendon is the supraspinatus tendon, which can become impinged as it passes between the acromion process and the humeral head during abduction.