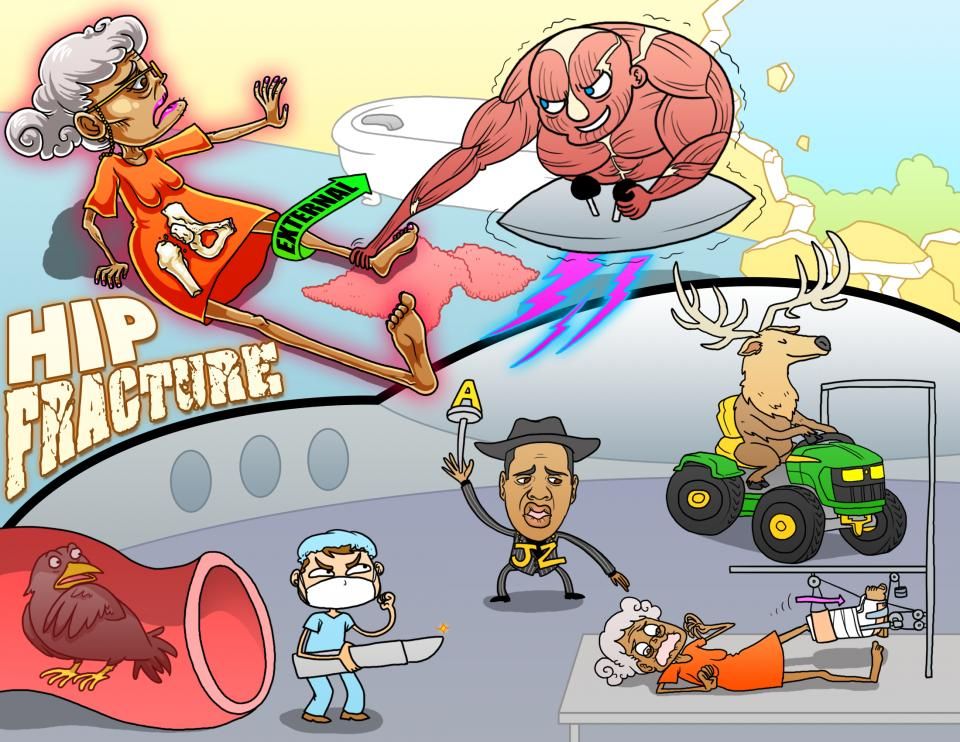 At osmosis, we are not too sure where the phrase ‘break a leg’ comes from, but we are pretty sure it is not meant to be taken literally. In this video, we are going to discuss the anatomy behind the clinical conditions affecting the hip, gluteal region, and thigh, and we hope you won't even break a sweat learning these conditions, let alone a leg!

Hip fractures are typically caused by mechanical falls or a trauma such as a car crash. And while they can affect anyone, they’re more likely to occur in the eldery, because of associated conditions such as osteoporosis, or Vitamin D and calcium deficiency. The classic presentation of a hip fracture is an individual who presents after a fall, and has an acutely shortened, externally rotated leg on physical examination compared to the contralateral side. This is due to the attachment points and pull of the iliopsoas and gluteus muscles. Other clinical features of a hip fracture include hip or back pain; joint deformity; and inability to bear weight.

Confirming the diagnosis of a hip fracture usually relies on anterior-posterior and lateral hip x-rays, but if x-rays are inconclusive in the context of strong clinical suspicion, a CT scan can be done. On imaging, intracapsular fractures can be identified by a loss of Shenton’s line, a line drawn from the inferior border of the superior pubic rami along the inferomedial border of the neck of the femur. Other features of an intracapsular fracture include a prominent lesser trochanter due to external rotation of the femur compared to the contralateral side, and shortening or angulation of the femoral neck.

Management of intracapsular and extracapsular hip fractures is typically surgical and the choice depends on the surgeon. It can be done using open reduction and internal fixation, or ORIF for short, which is a type of open surgery where the fractured bone is put back together using screws, plates, intramedullary rods, or a combination of these. Arthroplasty can also be done, and that’s when the femoral and acetabular components of the hip joint are either totally or partially replaced.

Speaking of which, let's talk about hip dislocation, which occurs when the femoral head is forced out of the acetabular socket, either anteriorly or posteriorly. Hip dislocations are typically caused by a traumatic injury such as a head-on motor vehicle collision. Posterior dislocations are the most common, amounting to 90% of dislocations. An example of this is a dashboard injury due to a high velocity car accident, where the hip is forced into flexion, adduction, and internal rotation due to the dashboard of the car as it pushes back on the flexed hips during a head on collision.

On the other hand, hyper-abduction with extension will produce anterior dislocation, especially in motorcycle crashes, where the legs are hyper abducted while riding. Individuals with hip replacements are at an increased risk of hip dislocations as well with a higher chance of posterior dislocation.

Individuals suffering a hip dislocation may also hear an audible "pop" or "clunk" as the femur comes out of its socket, in addition to pain and inability to bear weight. On examination of a posterior dislocation, there can be shortening and internal rotation of the affected limb, whereas an anterior dislocation presents with shortening and external rotation. Diagnosis is confirmed by x-ray. Hip dislocations, especially posteriorly, can also damage the sciatic nerve, and other complications include labral tears, which is when the ring of fibrocartilage surrounding the hip joint gets torn, and associated hip fracture.

Trochanteric bursitis is usually the result of repetitive actions such as climbing stairs, because repetitive movements cause the tendons from the gluteus medius and minimus to compress the trochanteric bursa against the greater trochanter resulting in inflammation.

Diagnosis is based on clinical symptoms such as chronic pain in the lateral thigh, and point tenderness over the greater trochanter. Pain can also be elicited by manually resisting abduction of the thigh while the person is lying on the unaffected side.

Speaking of cardiac catheterization, one complication to be aware of is retroperitoneal hemorrhage. This can occur if the posterior wall of the common femoral artery is punctured, allowing blood to track into the retroperitoneal space. Additionally, before crossing distal to the inguinal ligament, the common femoral artery is a continuation of the external iliac artery. If arterial puncture is done above the inguinal ligament, there is a higher risk of retroperitoneal hemorrhage as this area is directly inferior to the peritoneum.

Retroperitoneal hemorrhage is a potentially deadly condition because external compression can’t be applied on the retroperitoneal space, so without surgery, the affected individuals can bleed to death. Clinical signs to recognise include hemodynamic instability such as hypotension and pallor, pain on the affected flank, and a significant drop in hemoglobin.

The femoral artery is also prone to injury due to its anatomical location close to the femur, as proximal femur fractures or hip surgery can result in femoral artery injury. Additionally, due to its superficial position within the femoral triangle the artery can also be easily lacerated during traumatic events.

Now, let’s move on to varicose veins, which can develop because of venous insufficiency. With venous insufficiency, blood begins to pool in the veins of the leg rather than return to the heart, and in time, the veins become varicose or dilated. This can cause complications such as painful thrombosis, edema, as well as cosmetic issues.

One test that helps diagnose and characterize venous insufficiency is the Trendelenburg test, or the tourniquet test. When performing this, the individual lies on their back, and the affected leg is then raised above their head where the veins of the leg are massaged, or ‘milked’ down towards the groin. After the veins of the leg have been drained manually, with the leg still elevated, a tourniquet is placed around the thigh at the saphenous opening and the individual is asked to stand up as the examiner is observing the limb for any sign of the varicose veins reappearing.

One common condition associated with varicose veins is saphena varix, which is a dilation of the saphenous vein at its junction with the femoral vein in the groin. Clinically, individuals can present with a groin swelling the size of a golf ball, which enlarges with increased intraabdominal pressure, like when coughing. However, bear in mind that a femoral hernia also becomes apparent when asking a patient to cough, so a saphena varix is commonly mistaken for an inguinal hernia. Characteristic features for a saphena varix include a bluish tinge, and typically disappears when lying down.