A 15-year-old boy is brought to the emergency department because of severe abdominal pain, nausea, and vomiting. A few hours ago, he was playing basketball with his friends when he first developed mild abdominal pain. The pain increased gradually, and since then, the patient had increasing nausea and three episodes of vomiting. The patient has had similar, milder episodes in the past that resolved with rest. The review of systems is otherwise unremarkable. Past medical history is noncontributory. He is sexually active and uses condoms consistently. Temperature is 37.7°C (99.9°F), pulse is 95/min, respirations are 18/min, and blood pressure is 100/60 mmHg. Physical examination shows a soft, nontender, and nondistended abdomen. There is marked swelling, erythema, and tenderness of the right hemiscrotum. The pain is worsened when the right testis is elevated, and the scrotum does not transilluminate. Cremasteric reflex is absent on the right side. Physical examination of the left hemiscrotum and testis is unremarkable. Urinalysis is unremarkable. Which of the following is the most likely cause of this patient’s condition? 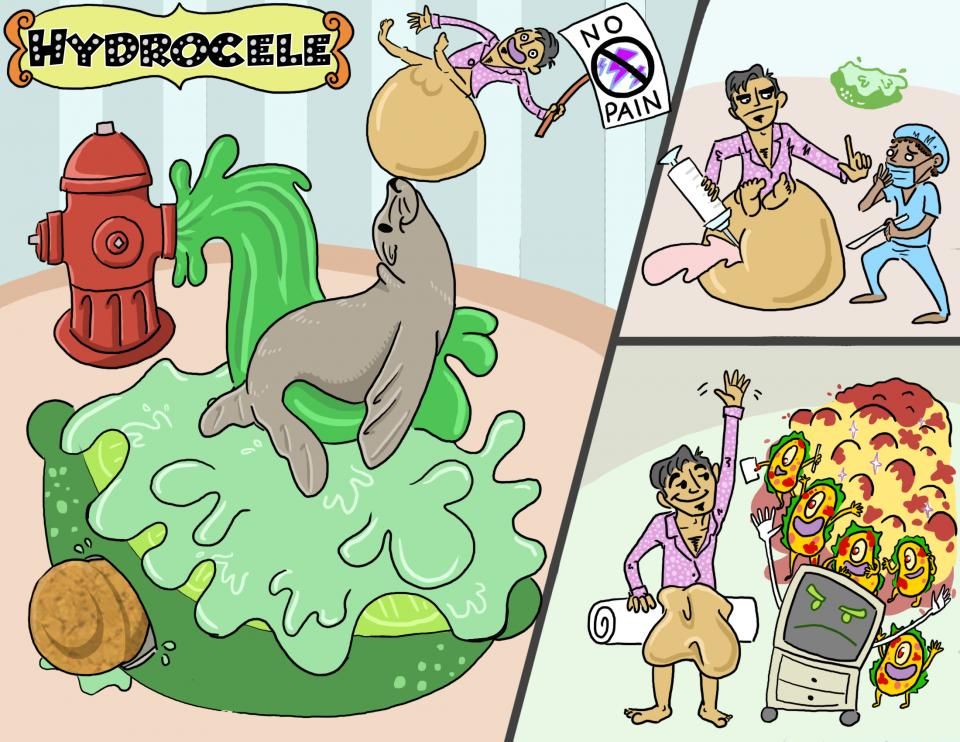 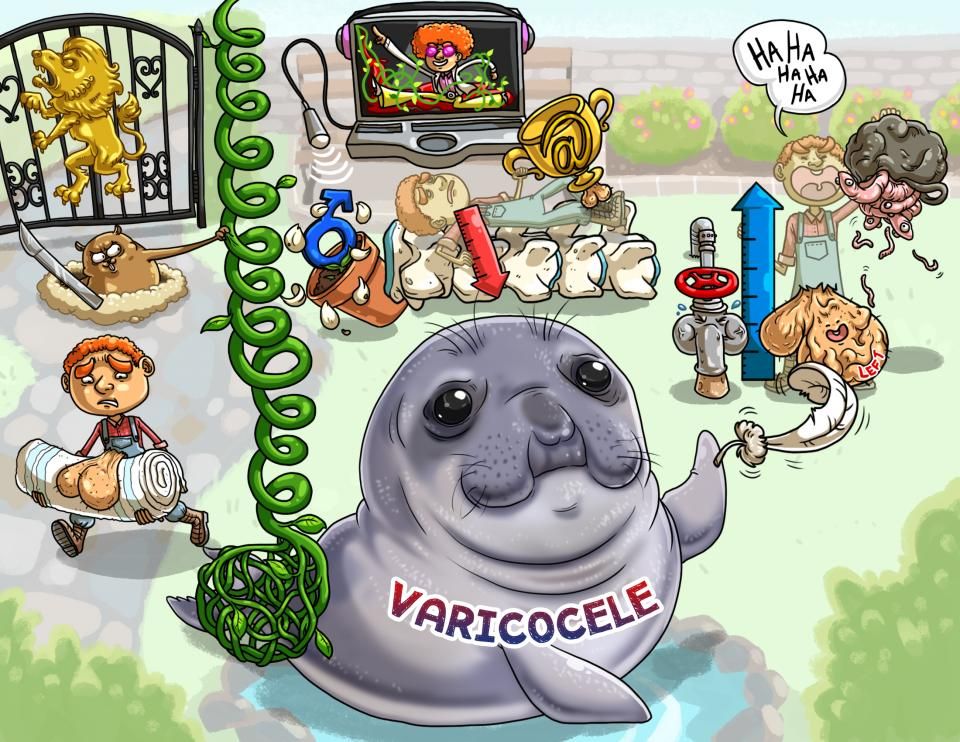 The inguinal region, located near the groin, is found in the lower part of the anterior abdominal wall, and it contains several important structures that enter and leave the abdomen. Understanding the anatomy of the inguinal region is important for understanding common clinical conditions such as hernias, and many others!

Speaking of which, hernias occur when an organ or tissue protrudes through the wall of the muscle or tissue that normally contains it. The majority of hernias occur in the abdominal cavity or the inguinal region, through which subcutaneous fat, abdominal omental fat, or even abdominal viscera can protrude. In order for a hernia to happen, there is typically a weak point along the abdominal wall, such as a weak linea alba, previous surgical interventions that weaken the abdominal wall muscles, or pregnancy.

First, let’s look at anterior abdominal wall hernias. They can be divided into 4 categories: epigastric, umbilical or periumbilical, spigelian and incisional hernias. Epigastric hernias are caused by a weakened linea alba and are basically defects in the abdominal midline between the umbilicus and the xiphoid process. Then, there are umbilical or paraumbilical hernias, which are hernias through the umbilical ring or around the umbilicus. These are often found in children, because the umbilical ring is weak at birth, but can also be acquired in adults and frequently affect pregnant or obese individuals.

Spigelian hernias are found along the semilunar lines which are skin folds from the inferior costal margin of the 9th costal cartilage to the pubic tubercles and overly the tendinous insertions of the rectus abdominis muscle, as abdominal tissue can protrude through these areas of tendinous insertions. Finally, an incisional hernia can develop at the site of a prior surgical incision as the muscle and fascia is typically weakened, for example over the surgical site for an appendectomy.

Incarcerated hernias are when the hernia contents are trapped and cannot be reduced, leading to swelling and edema of the herniated contents. With severe swelling, obstruction of blood flow to the herniated contents can occur, and this leads to ischemia and necrosis resulting in strangulation. Incarceration and strangulation can affect any protruding structure with a blood supply, such as the omentum and bowel.

Risk factors for developing a hernia include genetic defects, increased intra abdominal pressure, aging, obesity and pregnancy. Symptoms and signs of a hernia may include pain, discomfort, and a lump or a bulge in the affected area which may be exacerbated by increasing intra abdominal pressure such as coughing or laughing. Strangulated hernias can present with severe pain, nausea, vomiting, as well as tenderness and overlying erythematous skin changes.

Now, a similar concept to abdominal hernias is rectus abdominis diastasis, or divarication of the recti. This is when there’s a separation between the rectus muscles due to conditions that weaken and stretch the linea alba. This condition can also be congenital or acquired, and risk factors include obesity, pregnancy, connective tissue disorders or prior abdominal surgery. This particular type of hernia is not what we call a true hernia, because technically, the midline fascial layer of the abdominal wall is intact. This means that strangulation doesn’t occur.

Individuals affected by rectus abdominis diastasis present with a midline abdominal ridge that becomes more obvious when increasing the abdominal pressure and can disappear when the abdominal muscles are relaxed. Diagnosis is based on physical examination, and an abdominal ultrasound can be done to completely rule out a hernia.

Time for a quick quiz. What are the four main types of anterior abdominal wall hernias?

Femoral hernias also tend to be more common in biologically female individuals compared to biological males; but don't get confused, as inguinal hernias are a more common type of hernia in both biological males and biological females. Now, as the space in the femoral canal is limited, femoral hernias can often become irreducible and incarcerated, and subsequently can cause bowel obstruction if there is bowel located in the hernia sac. In time, this type of hernia can become strangulated and cause bowel ischemia and necrosis.

Direct inguinal hernias occur when there is weakness of the transversalis fascia. In this case, the hernia sac pushes through the weak portion of the transversalis fascia, above the inguinal ligament. Here, it protrudes into an area called Hesselbach triangle, which is bounded laterally by the inferior epigastric vessels, medially by the lateral wall of the rectus abdominis, and inferiorly by the inguinal ligament. You should note, direct hernias do not pass through the deep inguinal ring and may only protrude through the superficial ring, therefore they have no direct route into the scrotum.

Indirect hernias occur when the hernia sac emerges lateral to the inferior epigastric arteries which is in contrast to direct inguinal hernias, and protrude through the deep inguinal ring into the inguinal canal, with the potential to extend distally into the scrotum. Indirect hernias are typically caused by a failure of the processus vaginalis to close in biologic males or the deep inguinal ring to close in biologic females. Remember that the processus vaginalis is an embryonic structure that precedes the descent of the testes through the inguinal canal. Normally, after the testes have descended to the scrotum, this structure closes up, but in some cases, it can remain open and allow for communication between the abdomen and the scrotum.

Signs and symptoms of both femoral and inguinal hernias are a palpable bulge often exacerbated by increased intraabdominal pressure, pain, and discomfort. If an indirect hernia extends into the scrotum, then it can present as a larger palpable mass in the inguinal canal, and scrotal sac. If a hernia becomes incarcerated and strangulated, for example during a femoral hernia, this can lead to overlying erythematous skin changes, as well as nausea, vomiting, clinical obstruction, and extreme pain.

Okay, now let’s take a more practical approach on how to distinguish these different types of hernias based on clinical exam and anatomical landmarks. On clinical examination, femoral hernias are typically palpated lateral and inferior to the pubic tubercle. Both direct and indirect inguinal hernias occur above the inguinal ligament. Direct inguinal hernias push through the Hesselbalch triangle medial to the inferior epigastric artery, and may protrude into the superficial inguinal ring; so clinically, they can be palpated superficial or medial to the pubic tubercle.

Okay, hernias can be resolved surgically with a procedure called herniorrhaphy - but sometimes complications arise. During hernia surgery, sometimes an artery called the aberrant, or accessory obturator artery, can be injured. Typically, the obturator artery branches from the internal iliac artery. However in up to 20% of people, there can be an additional branch coming from either the inferior epigastric artery or external iliac artery that either replaces the obturator artery or joins it, and this is called an aberrant or accessory obturator artery. This artery runs in close proximity to the femoral ring and courses along the superior pubic rami; so during hernia repair it can become injured or stapled.