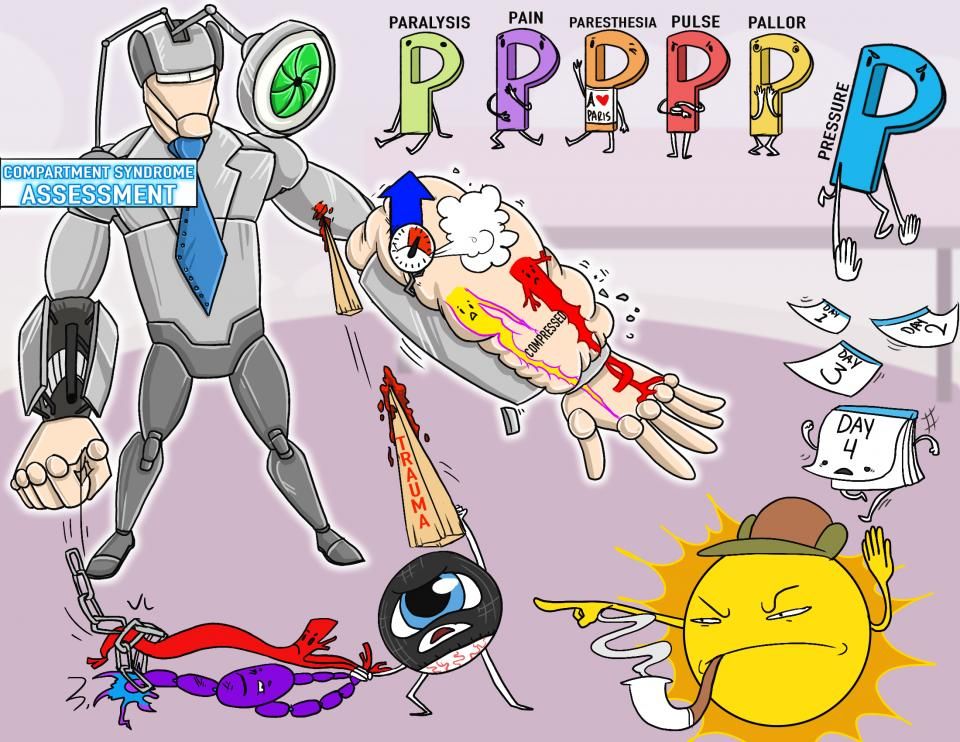 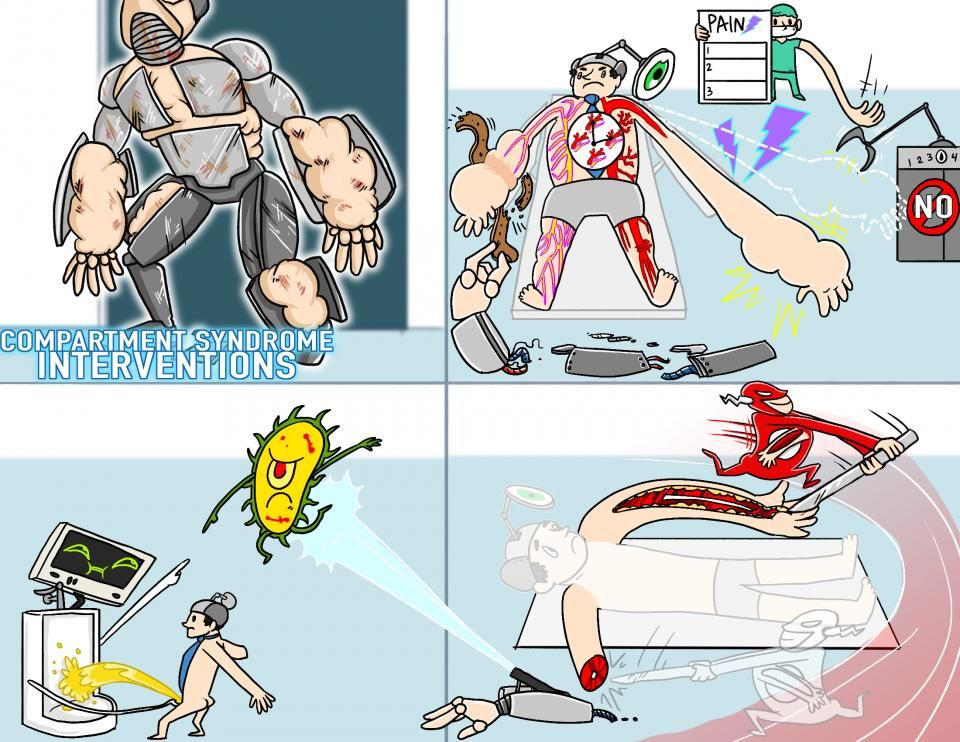 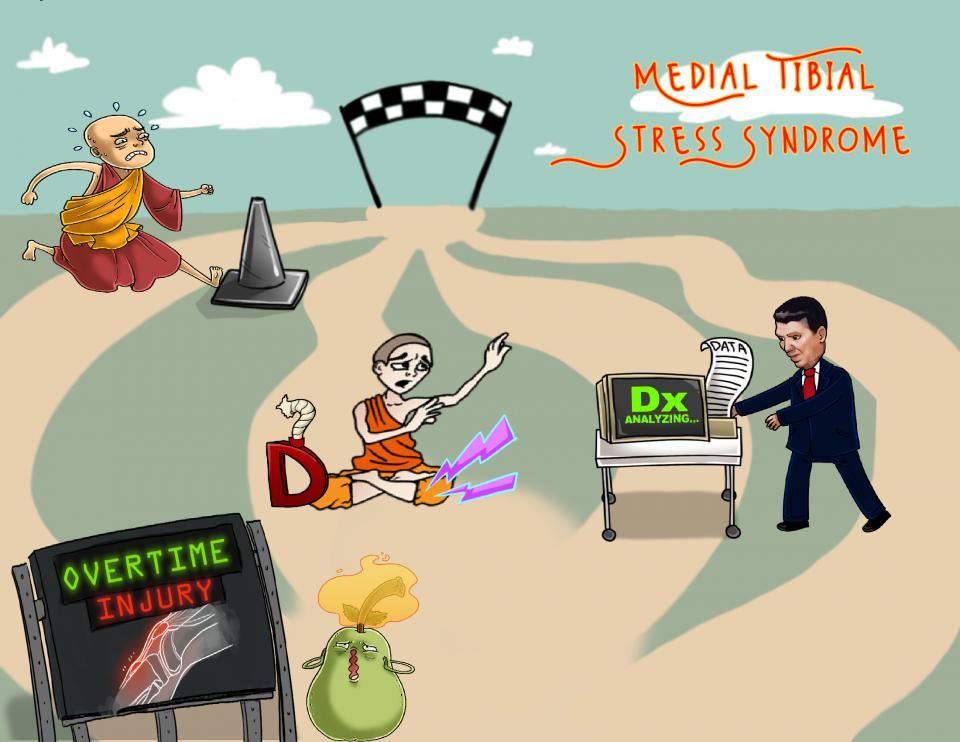 An injury at the popliteal fossa affects the innervation of both the lower leg and the foot. Individuals can present with weakness in plantarflexion, inversion, and toe flexion of the foot, due to decreased innervation to the muscles in the deep compartments of the lower leg. Additionally, those affected can present with their foot in a calcaneovalgus position, or more simply in dorsiflexion and eversion. Injury at this level also impairs innervation to the intrinsic muscles of the foot and can also cause paresthesia to the sole of the foot.

Injury of the tibial nerve at the tarsal tunnel impairs innervation to the intrinsic muscles of the foot, and causes pain and paresthesia over the sole of the foot. In contrast to injury at the popliteal fossa, if the tibial nerve is injured at the tarsal tunnel, plantarflexion and foot inversion remain intact as the innervation to the muscles of the lower leg are not affected.

Next up, let’s look at injury to the common fibular nerve. This nerve typically branches as the lateral division of the sciatic nerve, at the apex of the popliteal fossa. It then courses posterior to the head of the fibula and wraps laterally around the neck of the fibula to eventually divide into the superficial fibular nerve, which supplies the lateral compartment of the leg mainly responsible for eversion of the foot, and the deep fibular nerve which supplies the anterior compartment of the leg mainly responsible for dorsiflexion of the foot and supplies the region between the first and second toes.

Injury to the common fibular nerve typically occurs due to compressive forces at, or near the fibular head. Compression of the common fibular nerve can be due to prolonged bed rest or positioning during surgical procedures, cast immobilization which is too tight at the fibular head, or positionally such as leg crossing or squatting. Symptoms of nerve compression are typically transient, however more severe mechanisms such as fibular neck fractures and knee dislocation can cause severe or permanent damage.

A classic sign of common fibular nerve compression is unilateral foot drop, which means difficulty dorsiflexing the foot, particularly when walking. Affected individuals describe a "steppage" gait, which is a tendency to trip over the affected leg unless they compensate by flexing the hip higher when walking.

Other symptoms include paresthesia and sensory loss over the dorsum of the foot and lateral shin, however if there is only injury to the superficial division of the fibular nerve then sensation between the first two toes in the first web space is preserved as this area is supplied by the deep fibular nerve. Individuals may have weakness in foot eversion due to impairment of the lateral compartment muscles. If the fibular nerve is fully damaged then flaccid paralysis of all muscles in the anterior and lateral compartments of the leg can occur. With common fibular nerve injury, plantar flexion and ankle reflexes remain intact as they are controlled by the tibial nerve.

Ok, time for a quick break! Can you remember where proximal and distal tibial nerve injury can happen?

Let’s switch gears and look at tibial fractures next. Tibial fractures tend to occur during high energy trauma such as motor vehicle crashes and sports injuries, and with low energy trauma such as falls or twisting injuries. Repetitive, low energy actions, for example long distance running, can also lead to what is called stress fractures, which progressively weaken the bone leaving it susceptible to future fracture. Tibial fractures typically occur at the middle or distal third, where the bone is thinnest and has the poorest blood supply.

Ok, so low energy fractures tend to cause spiral fractures of the tibia, whereas high energy fractures can lead to severe soft tissue injury and compound or open fractures, which is when the fracture breaks the surface of the skin and bony fragments can maybe be seen protruding through.

Other complications of tibial fractures include comminution, meaning there are multiple bony fragments resulting from the fracture which can ultimately lead to poor healing and nonunion if the tibial blood supply is compromised. This often occurs at the middle or distal third of the tibia, particularly at the medial malleolus. If fracture occurs in the proximal tibia, there can be extension into the tibial plateau, and intercondylar notch, which can affect the articular cartilage. Finally, tibial fractures can lead to a complication called compartment syndrome, which is increased pressure in the muscular compartments of the lower leg.

Because these compartments are closed off, any increase in compartmental pressure can compress the structures found within these compartments. This can lead to vascular compression, compromising blood flow, which may result in ischemic and eventual irreversible muscle and nerve damage. Fractures, such as tibial fracture, are the most common reason for compartment syndrome, but it can also be a consequence of crush injuries such as a car crash, bleeding disorders, vascular disease, or from constrictive bandages or casting.

Symptoms can progress rapidly, so it is important to recognize compartment syndrome clinically as diagnosis is considered a surgical emergency. Compartment syndrome resulting in vascular compromise typically presents with the 6 P’s; The first is Pain, typically out of proportion to the clinical situation, for example if passive stretching of the toes causes excruciating pain. Then there’s Pallor, or loss of color in the leg, Paresthesia or loss of nerve sensation related to the affected compartment, Paralysis of the muscles of the affected compartment, Palpable swelling, and finally Pulselessness, which is a late finding and, at this stage, amputation may be needed.

The anterior compartment of the leg is the most commonly affected site. Remember that it contains the anterior tibial artery, and the deep fibular nerve. Symptoms include loss of sensation between the first and second toes, weakness of foot dorsiflexion and inversion, potential foot drop, and loss of the dorsalis pedis artery pulse on palpation.