A 62-year-old man presents to the emergency department for evaluation of facial swelling. Over the past several weeks, he has noticed his face has become “puffier,” particularly in the morning. In addition, he has a new cough and shortness of breath on exertion. His own past medical history is unremarkable, though his father passed away from a pulmonary embolism. The patient takes no medications. He has smoked one pack of cigarettes per day for thirty years. He does not use alcohol or illicit drugs. Temperature is 37.6°C (99.7°F), pulse is 111 /min, and blood pressure is 131/66 mmHg. Respirations are 18/min, and oxygen saturation is 96% on room air. Physical examination demonstrates distended neck veins and bilateral facial fullness without tenderness to palpation or erythema. Which of the following is the most likely etiology of this patient's clinical presentation? 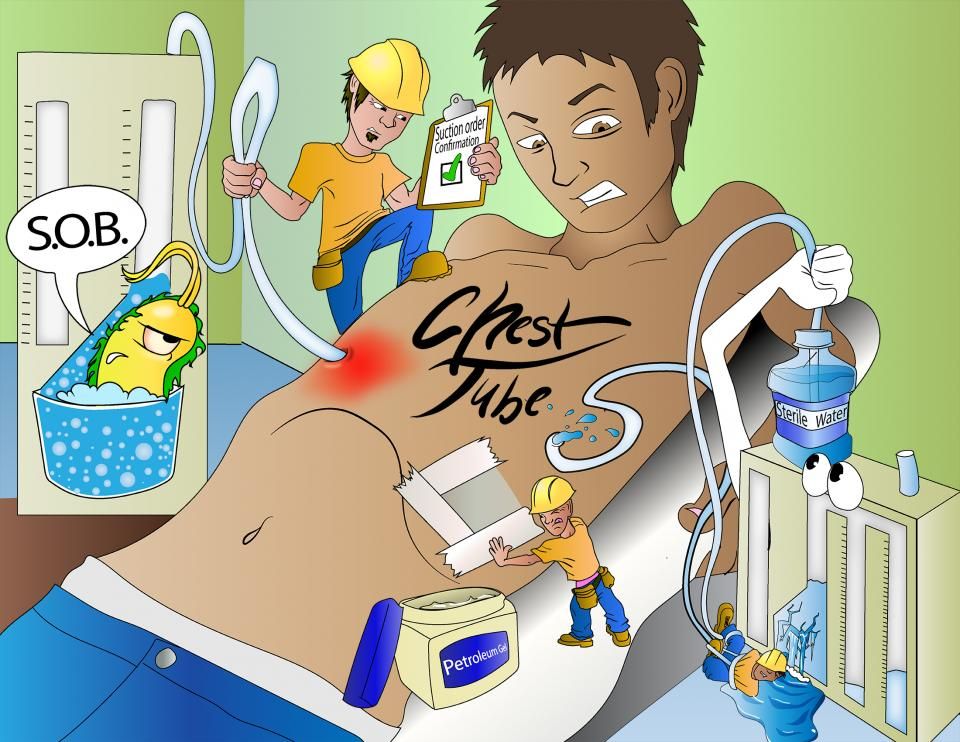 Before you start watching this video, relax, and take a deep breath.

Think about the air filling up your lungs, which are located on either side of your thoracic cavity.

Now, we often take breathing for granted because it is under autonomic control, and it’s not until we have trouble breathing when we realize just how important our lungs are.

There are many conditions that can affect the lungs, which can have a huge impact on our day to day lives.

Now let’s look at some causes for lung ailments, starting with injuries of the cervical pleura and lung apex.

Both these structures project through the superior thoracic aperture into the neck.

So when there’s an injury involving the base of the neck, the lungs and pleural sacs can be injured as well, which can cause a pneumothorax.

The pleura is also exposed to potential injury in its inferior portion, because it descends below the costal margin in three regions, where a penetrating injury may enter into the pleural sac.

The first is the right part of the infrasternal angle, the other two parts are the right and left posterior costovertebral angles which are inferomedial to the 12th ribs and posterior to the superior poles of the kidneys.

So kidney surgery can pose a risk for pleural injury.

When discussing injuries to the pleura and lungs, it’s important to understand what pleuritic chest pain means.

Pleuritic chest pain is caused by irritation to the pleura, which results in a classical ‘sharp’, stabbing pain that gets worse when you breathe in, and is exacerbated even further by deep inhalation and exhalation.

Inflammation of the pleura can cause pleuritic chest pain, which is often the result of infection or inflammatory diseases such as rheumatoid arthritis, and may even result in an empyema where infected fluid builds up in the pleural cavity.

Pulmonary emboli can also result in irritation of the pleura, resulting in pleuritic chest pain.

Pleuritic chest pain is mostly experienced at the site of pleural irritation, however we can also have a phenomenon we call referred pain.

Portions of the parietal lung pleura are innervated by branches of the intercostal nerves peripherally and the phrenic nerves centrally where the parietal pleura covers the diaphragm.

So for example, if there’s irritation of the parietal pleura caused by something like an infection or effusion overlying the mediastinal and central areas of the diaphragm, then we get referred pain to the dermatomal areas supplied by the same spinal levels.

Now let’s look at a procedure called a thoracentesis, also known as a thoracocentesis, which when a hypodermic needle is inserted through an intercostal space and into the pleural cavity to remove pleural fluid, blood or pus from the pleural space.

Always remember to insert the needle above the superior border of the rib in order to avoid damage to the intercostal nerves and vessels, which run along the inferior portion of each rib.

For example, if doing a thoracentesis at the midaxillary line between rib 8 and 9, you would insert the needle along the superior border of 9th rib as your guide.

To enter the pleural cavity, the needle passes through skin, then the intercostal muscles, and finally the costal parietal pleura.

If the individual sits in an upright position, the intrapleural fluid accumulates in the costodiaphragmatic recess due to gravity.

In this case, the needle should be inserted into the 8th or 9th intercostal space in the midaxillary line during expiration, which will help avoid injuring the inferior border of the lung.

Additionally, the needle should be oriented upward in order to avoid penetrating the deep side of the recess, which is a thin layer of diaphragmatic parietal pleura and diaphragm overlying the liver.

Of note, caution should be taken as any thoracentesis done below the 9th rib has a risk of injury to abdominal structures, like the liver if doing a thoracentesis on the right lung.

Air can accumulate in the pleural cavity because of a penetrating wound of the parietal pleura, such as a bullet or knife wound.

The lungs are particularly vulnerable at the apices as the cervical pleura extends above the first rib and clavicle.

No matter the cause, when there’s air in the pleural cavity, this can present with varying degrees of severity depending on the extent of the pneumothorax.

Symptoms of a pneumothorax include shortness of breath and sudden unilateral pleuritic chest pain.

On clinical examination, the chest wall on the affected side might appear bigger than the normal side.

On a chest x-ray, there’s a retracted visceral pleural edge, which is seen as a thin, sharp white line, alongside a decreased lung volume due to the lung collapsing.

The space beyond the visceral line is mostly black, because the space where the lung should be is filled with air.

When there’s only a small amount of air in the pleural space, the individual is usually hemodynamically stable, and can be treated conservatively.

However a larger pneumothorax can result in significant collapse of the corresponding lung and requires advanced treatment.

A pneumothorax can also escalate into what is known as a tension pneumothorax, where air continues to enter the pleural space and is unable to leave.

This is because with a tension pneumothorax, there’s a flap of tissue close to the area of air entry that creates a one-way valve for air to flow in the pleural space, but does not allow air out..

A tension pneumothorax typically has a more severe clinical presentation.

See, that’s because air can’t get out, so it rapidly accumulates in the pleural cavity, compressing the other organs in the mediastinum, including the heart, leading to increased thoracic pressure, which causes lower systemic venous return to the heart and a decreased cardiac output.

With a tension pneumothorax, there may also be a mediastinal shift on a chest x-ray, which is seen as a tracheal deviation and displacement of chest structures away from the affected side.

However, a tension pneumothorax should be recognized clinically and treated immediately to achieve decompression, since it can cause rapid deterioration of the viral signs.

So, typically the quickest way to allow for air evacuation is needle thoracostomy which is often done in the second intercostal space on the affected side, at the midclavicular line, which decompresses the chest and provides an escape route for the trapped air.

Since anatomy always comes in handy, you can identify the second costal cartilage by using the sternal angle.

Alternatively, you can also use the 4th or 5th intercostal space at the midaxillary line for decompression.

Speaking of which, chest tubes can be used for a variety of other reasons as well.

Right off the bat, a chest tube is a good idea when air, blood, fluid, pus or a combination of these accumulates in the pleural cavity.

In this case, the chest tube is inserted in either the 4th or 5th intercostal space at the anterior axillary or mid axillary line, and then guided through the skin, subcutaneous tissue, serratus anterior, intercostal muscles, and parietal pleura.