A 67-year-old man presents to the emergency department for evaluation of visual impairment. The patient has not had headache, trauma, or difficulty with speech, swallowing, or walking. Past medical history is significant for coronary artery disease, hypertension and hyperlipidemia. Temperature is 37°C (98.6°F), pulse is 120/min (irregularly irregular), respirations are 17/min and blood pressure is 160/90 mm Hg. On neurological examination, the patient is alert and oriented to person, place, and time. Speech is fluent, and the patient follows all commands. Visual field examination findings are shown below.  The remainder of the neurological examination is within normal limits. Perfusion of which of the following regions of the brain is most likely impaired in this patient? 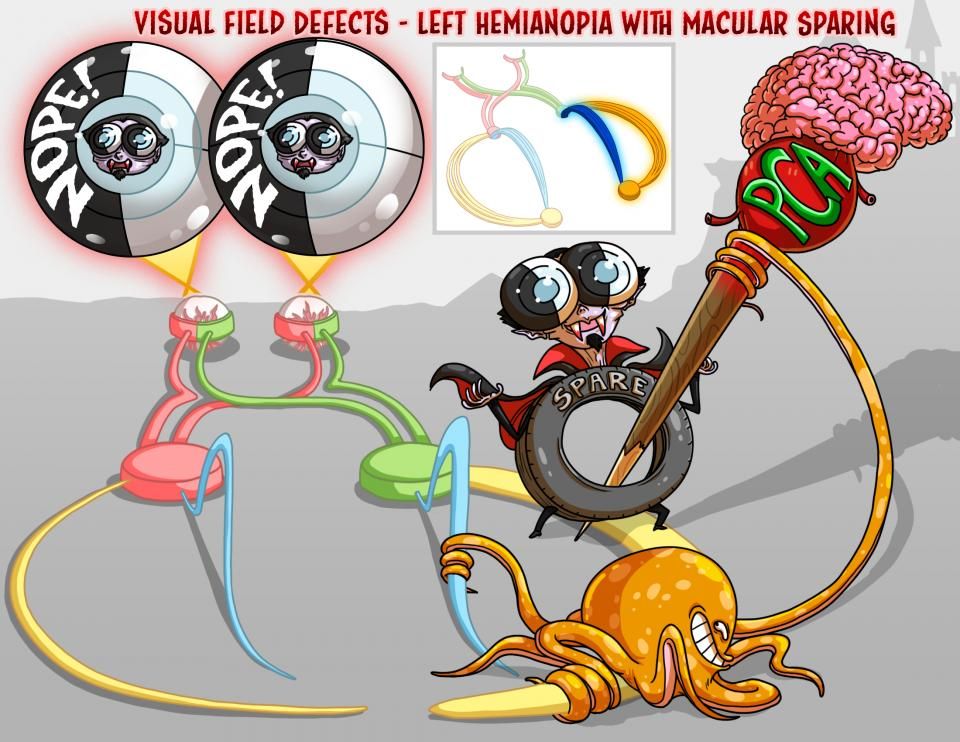 When blood flow to the brain is obstructed, that causes a stroke, which can be either ischemic or hemorrhagic. Ischemic strokes can be caused by thrombi, emboli, and hypoperfusion injuries, with the latter most commonly affecting the watershed areas of the brain. Hemorrhagic strokes, on the other hand, occur when there is a bleed within the brain tissue called an intracerebral or intraparenchymal hemorrhage, or a bleed in the subarachnoid space called a subarachnoid hemorrhage. The posterior circulation of the brain is susceptible to all of these, and the clinical signs and symptoms depend on which artery is occluded.

Clinical features usually occur during an exercise, when blood flow to the occluded arm is not enough to meet the demand, causing muscle weakness and claudication, meaning pain or cramping of the muscles. Individuals can also have neurological symptoms such as light headedness, dizziness and vertigo.

Next up, let’s look at the anterior spinal artery, which arises from the vertebral arteries. The anterior spinal artery, together with the vertebral arteries, give paramedian branches for the anteromedial parts of the medulla. This region of the medulla includes many important structures such as the lateral corticospinal tract within the pyramids, medial lemnisci, and the hypoglossal nucleus and fibers coming from it.

So when the paramedian branches of the anterior spinal arteries don’t provide adequate blood flow, the structures within the anteromedial parts of the medulla are damaged, leading to Medial Medullary syndrome. Clinically, damage to the lateral corticospinal tracts at this level causes contralateral hemiparesis of the upper and lower extremities. Damage to the medial lemniscus pathway at this level leads to contralateral hemisensory loss of proprioception, fine touch, and vibratory sensations from the trunk and extremities. And finally damage to the hypoglossal nucleus or nerve fibers leads to ipsilateral flaccid paralysis of the tongue that can be seen as deviation to the paralyzed side when protruded.

A good way to remember the symptoms of Medial Medullary syndrome is to think of 3 Midline structures. The M in midline stands for medial, and all 3 structures start with an M: 1) Motor pathway (corticospinal tract) 2) Medial lemniscus 3) Motor fibers of hypoglossal nerve.

Okay, now let’s look at the posterior inferior cerebellar artery, or PICA for short, which is a branch of the vertebral artery that supplies the lateral part of the medulla and regions of the cerebellum. This region of the medulla it supplies contains many important structures such as the vestibular nuclei, spinal trigeminal nucleus, spinothalamic tract, nucleus ambiguus, the inferior cerebellar peduncle, and sympathetic fibers.

Next up, damage to the inferior cerebellar peduncle leads to ipsilateral ataxia, or lack of muscle control and coordination when performing voluntary movements; dysmetria, or inappropriate voluntary action execution, such as overreaching for a glass of water; and dysdiadochokinesia, or an inability to perform rapid alternating muscle movements. Finally, damage to descending sympathetic fibers can result in Horner syndrome which includes ptosis, anhidrosis and miosis.

In order to remember the structures damaged in this syndrome, we can remember that the lateral Side of the medulla that has 6 ‘S’s: 1) the veStibular nuclei 2) the Spinal trigeminal nucleus 3) the Spinothalamic tract 4) Speech and Swallowing representing the nucleus ambiguous 5) Inferior ‘S’erebellar peduncle...ok we know that starts with a C but it sounds like an S…..and 6) Sympathetics. Another mnemonic that you can use to recall the most common clinical features of the lateral medullary syndrome is: Don’t pick a (PICA) horse (hoarseness) that can’t eat (dysphagia).

Okay, now after the vertebral arteries combine to form the basilar artery, there is a branch called the anterior inferior cerebellar artery, or AICA for short, which supplies the lower lateral part of the pons, and the inferior and middle cerebellar peduncles. Infarction of the AICA can lead to something called Lateral Pontine syndrome, also known as the AICA syndrome. Now, in this region, there are structures like the facial motor nucleus, the vestibular nuclei, the spinothalamic tract, spinal trigeminal nucleus, sympathetic fibers, the middle and inferior cerebellar peduncles, and the labyrinthine artery.

Damage to the facial motor nucleus results in ipsilateral facial paralysis due to lower motor neuron damage, along with decreased tear and saliva production, loss of taste from anterior two thirds of the tongue, and loss of corneal and stapedial reflexes. Vestibular nuclei lesions result in nystagmus, vertigo and vomiting. Spinothalamic tract and spinal trigeminal nucleus damage lead to loss of temperature and pain sensations in the ipsilateral side of the face and contralateral side of the trunk and extremities.

Damage to the inferior and middle cerebellar peduncles result in ipsilateral ataxia, dysmetria and dysdiadochokinesia. Finally, damage to the sympathetic fibers can cause ipsilateral Horner syndrome. Bear in mind that the AICA typically gives rise to the labyrinthine artery that supplies the inner ear, so infarction of the AICA also causes ipsilateral sensorineural deafness, accompanied with tinnitus and vertigo. Now, when trying to differentiate between all of these syndromes, in particular from lateral medullary syndrome which shares similar features, facial paralysis is specific to AICA territory infarcts.

Let’s take a short break and see if you can remember the difference between PICA and AICA infarction.

Great! Now let’s move on to the Basilar artery, which supplies the lower midbrain, the anterior medial part of the pons and the anterior parts of the medulla. Infarction of the basilar artery causes locked-in syndrome, which is a scary condition where the individual may have full consciousness but is paralysed.