Anatomy of the abdominal viscera: Esophagus and stomach

Figure 1: Muscular layers of esophagus. A. Circular and longitudinal layers. B. Type of muscle found throughout the esophagus. 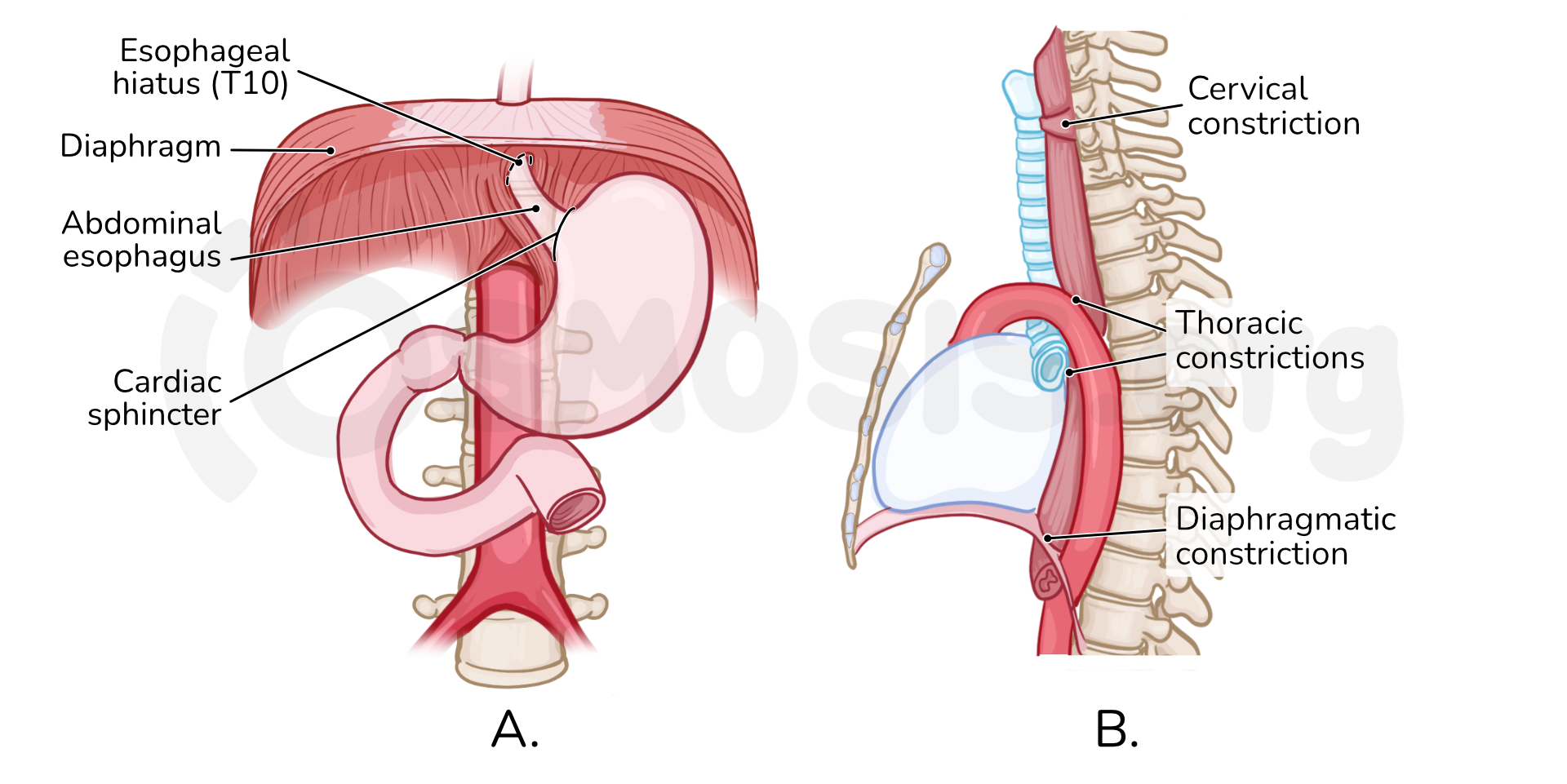 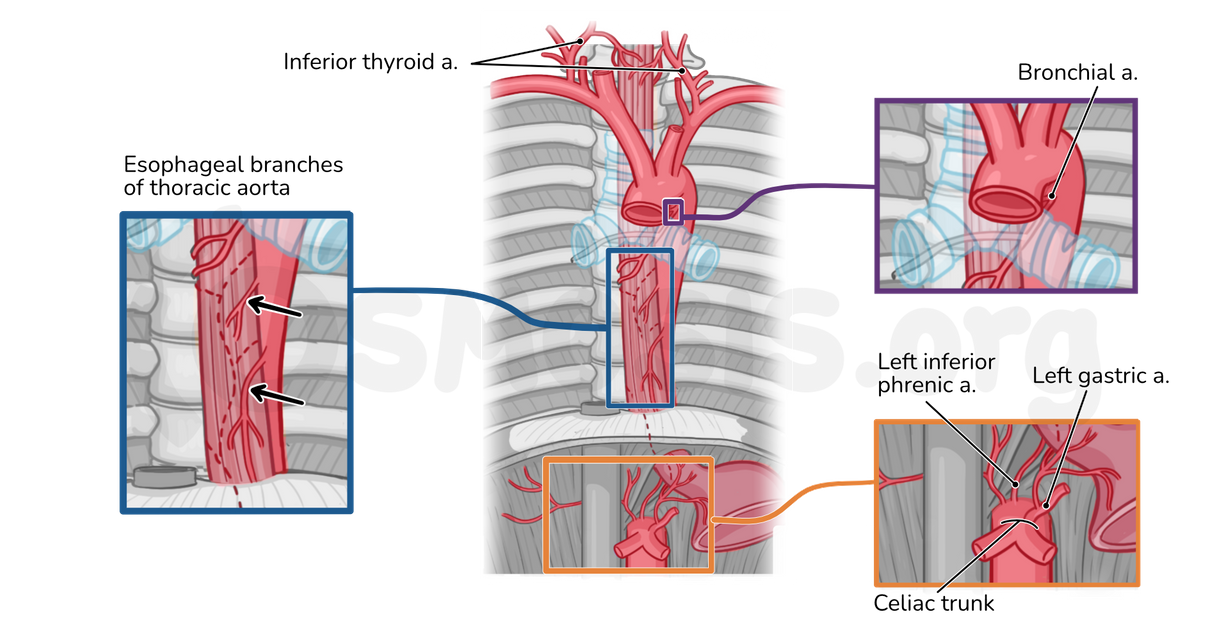 Figure 3: Arterial supply of the esophagus.

Figure 4: Venous drainage of the esophagus.

Figure 5: Lymphatic drainage of the esophagus.

Figure 6: Sympathetic and parasympathetic innervation of the esophagus. 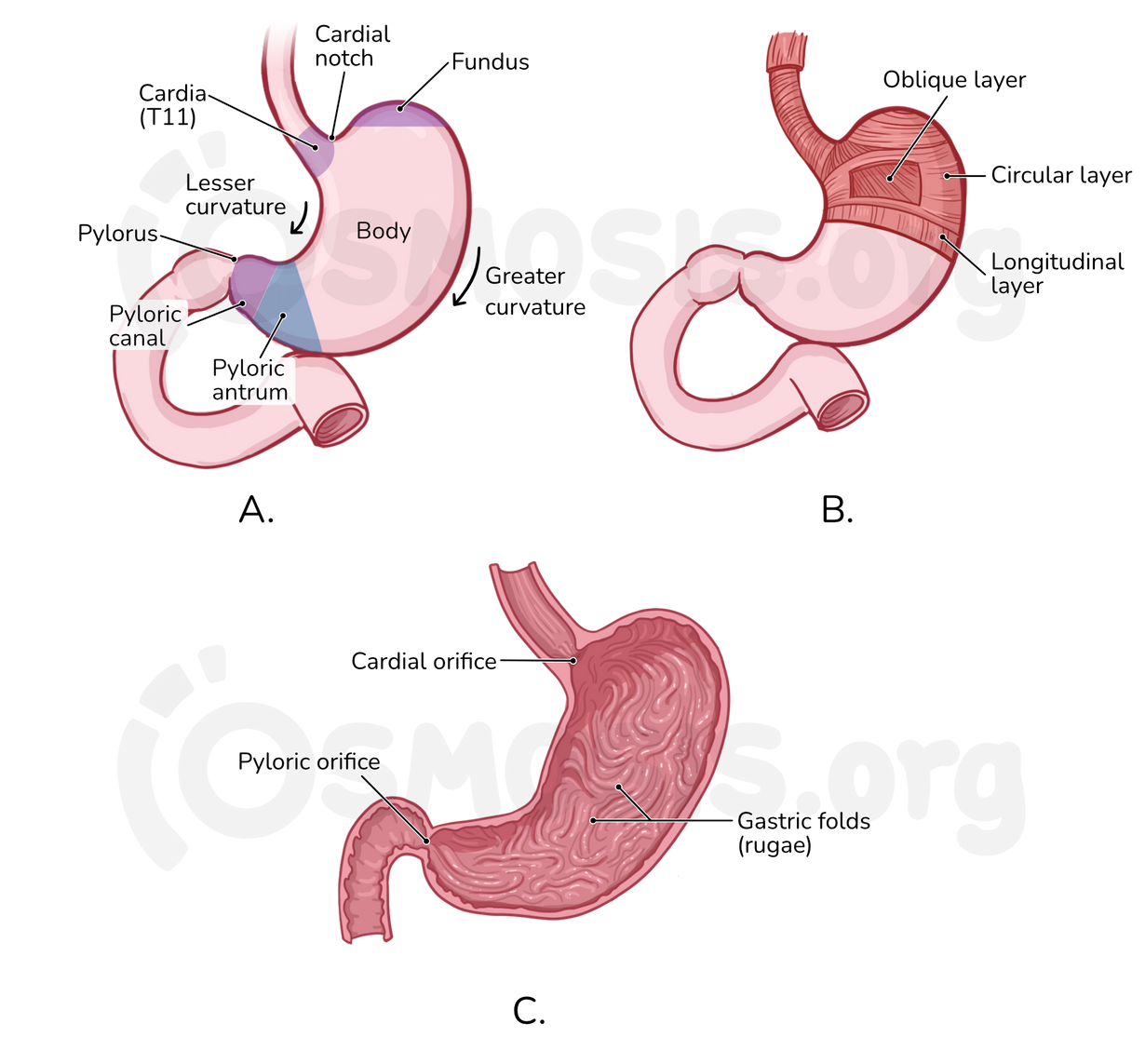 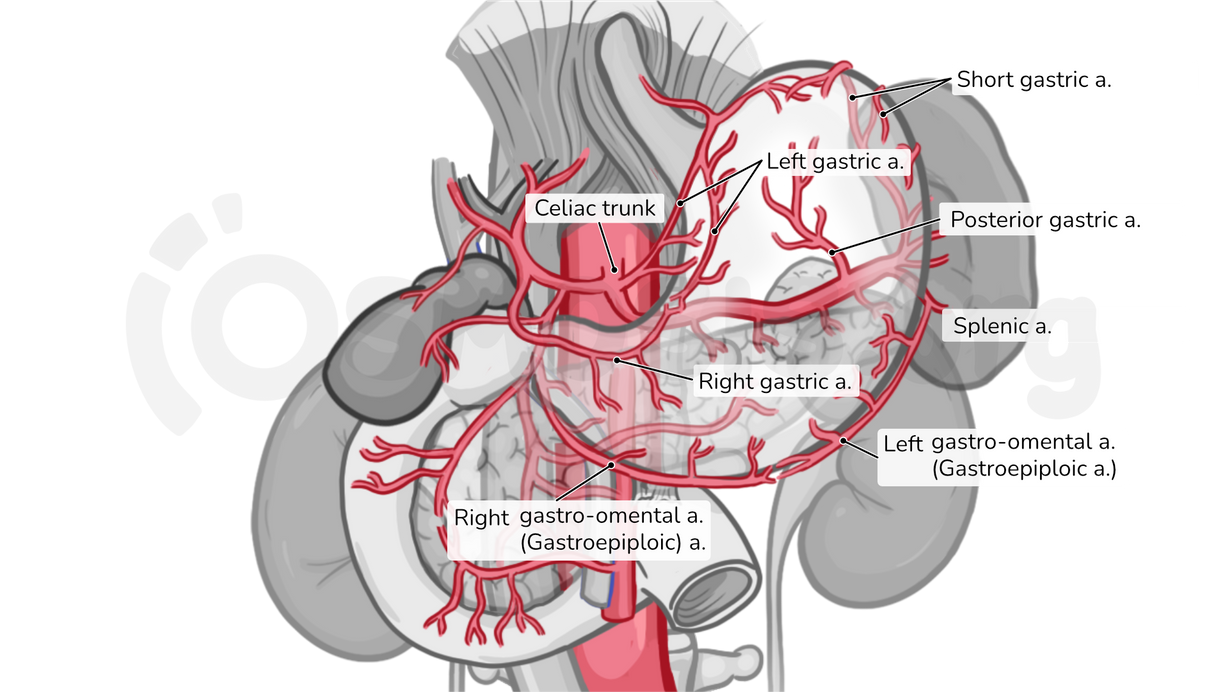 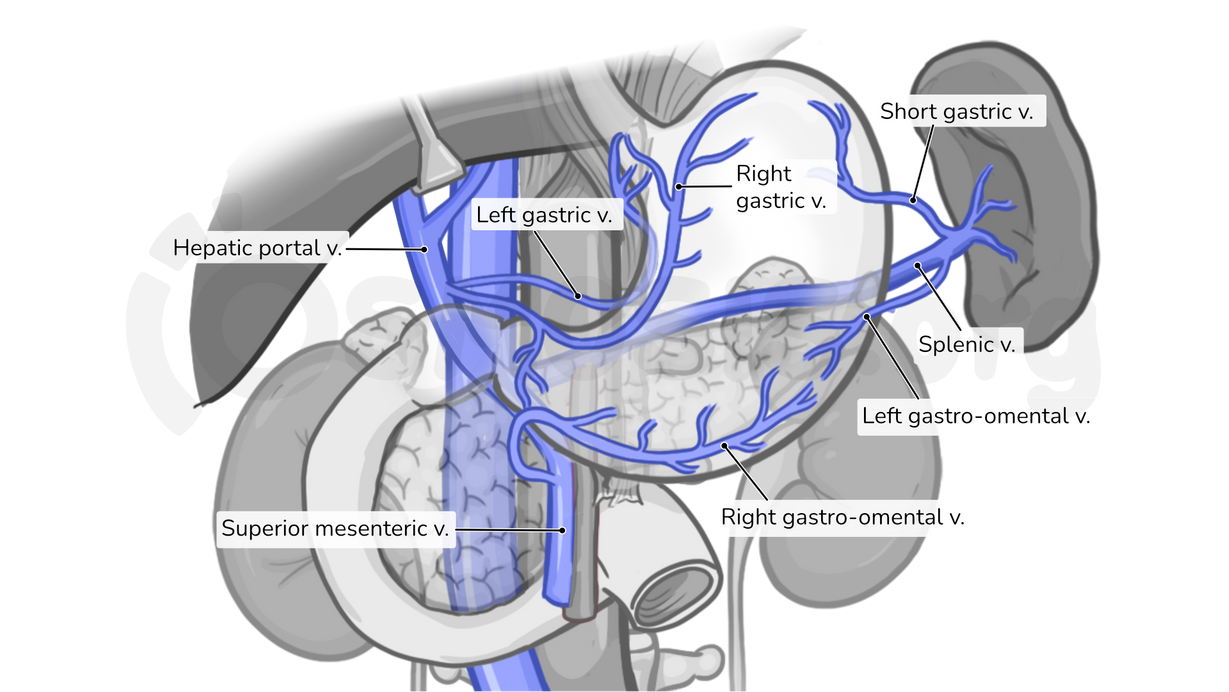 Figure 9: Venous drainage of the stomach. 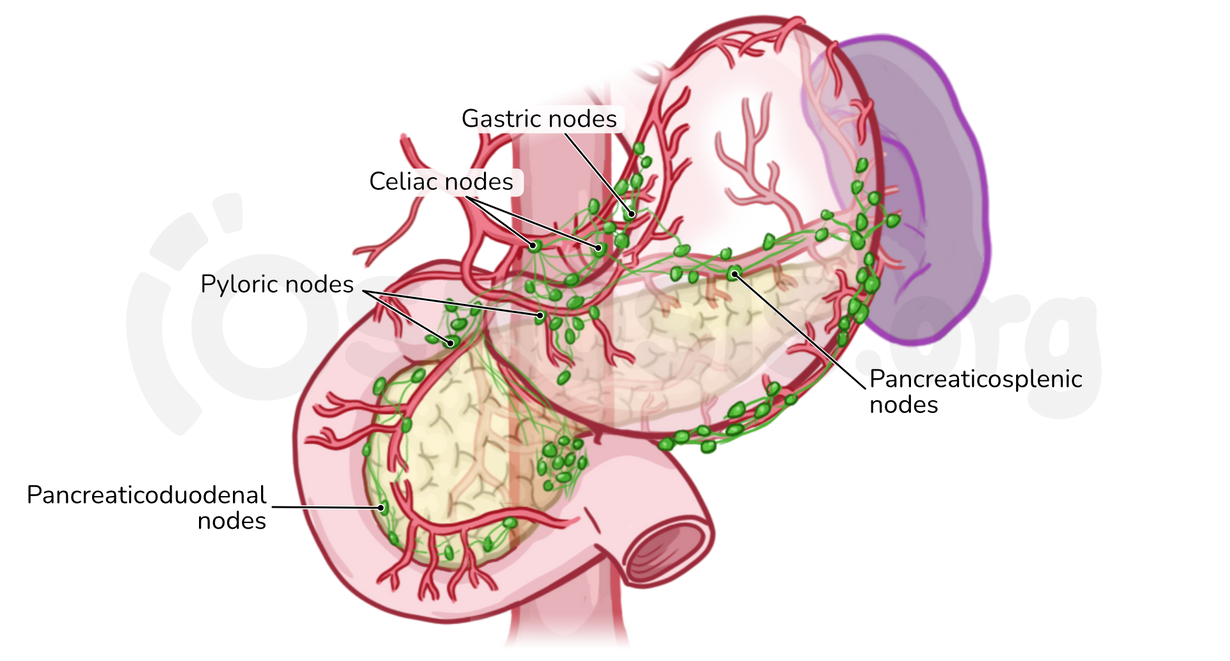 Figure 10: Lymphatic drainage of the stomach. 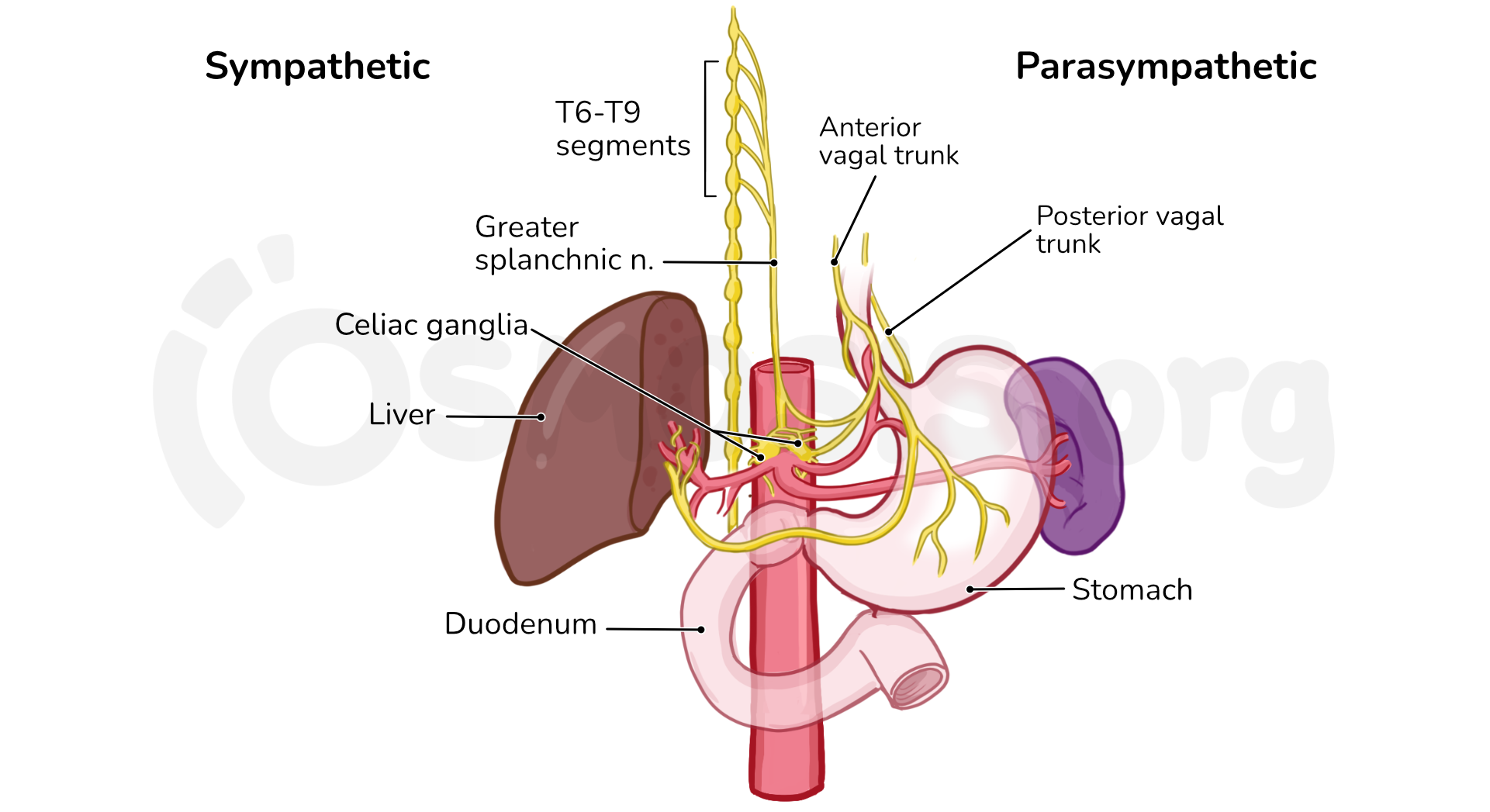 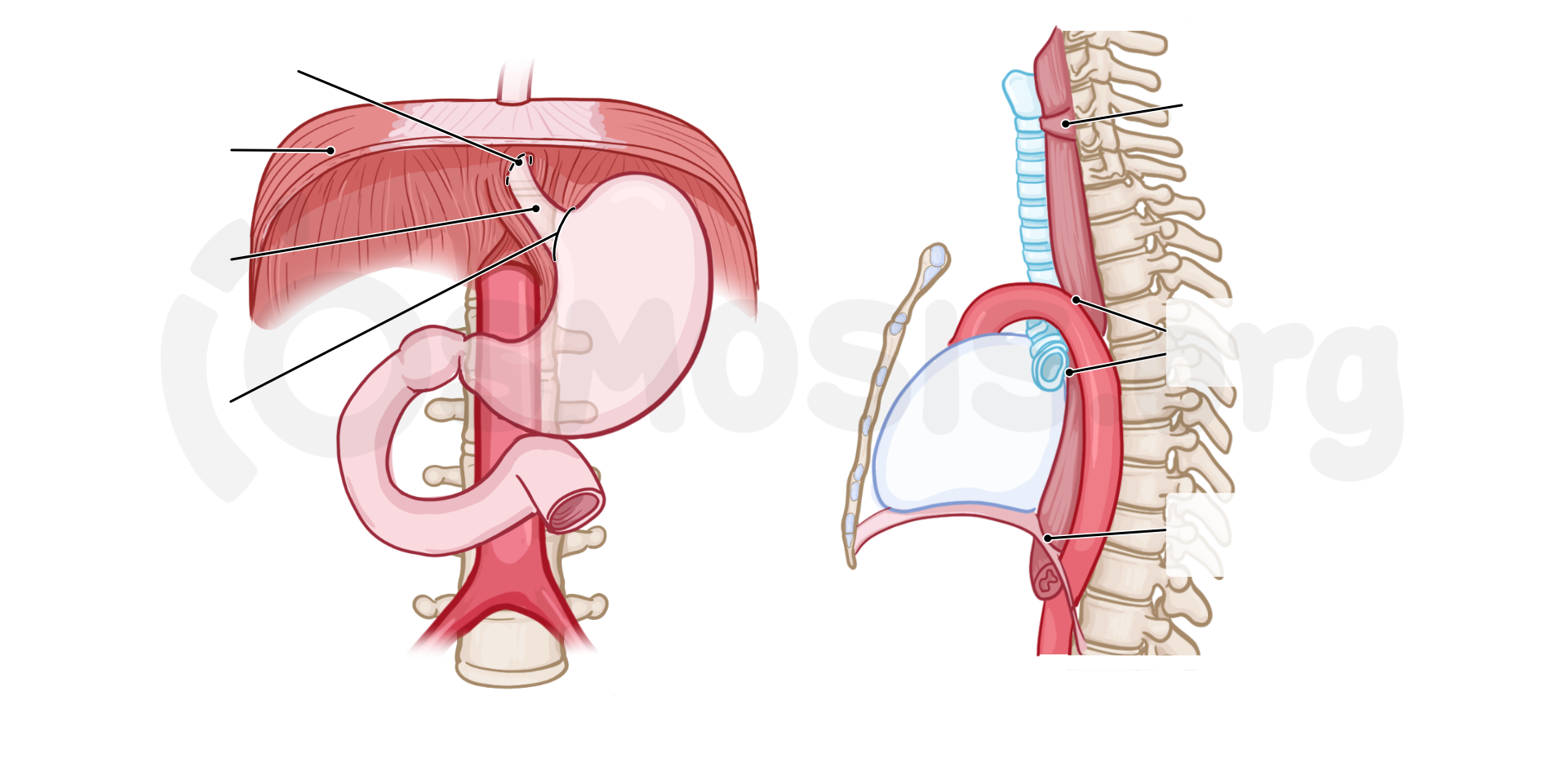 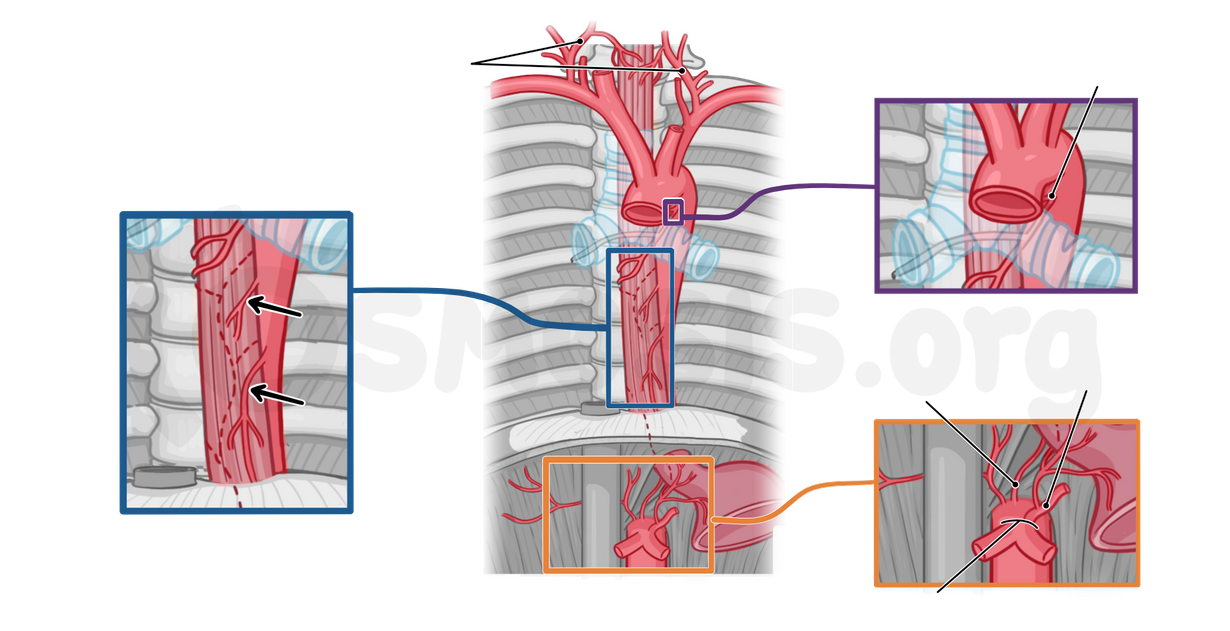 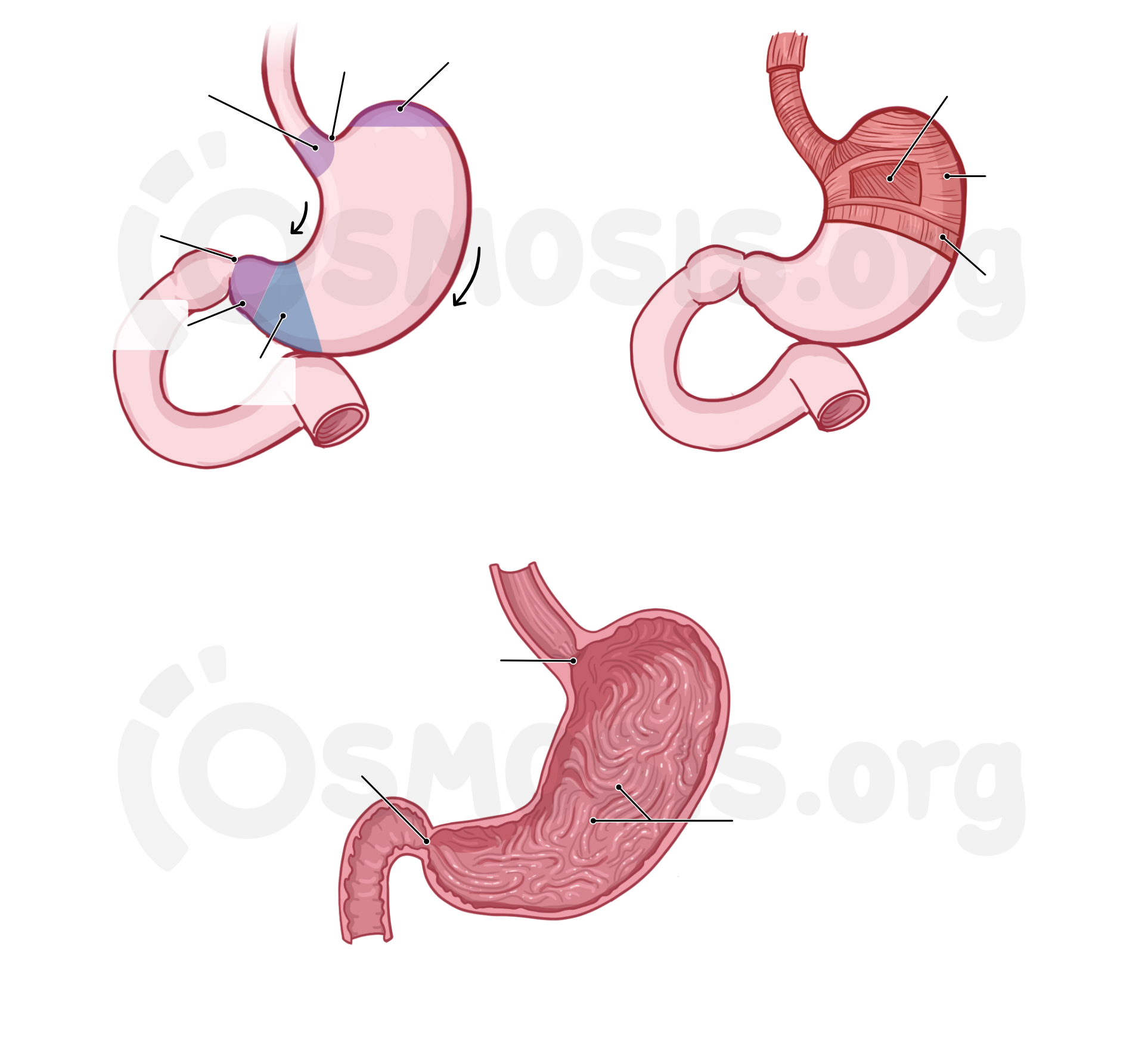 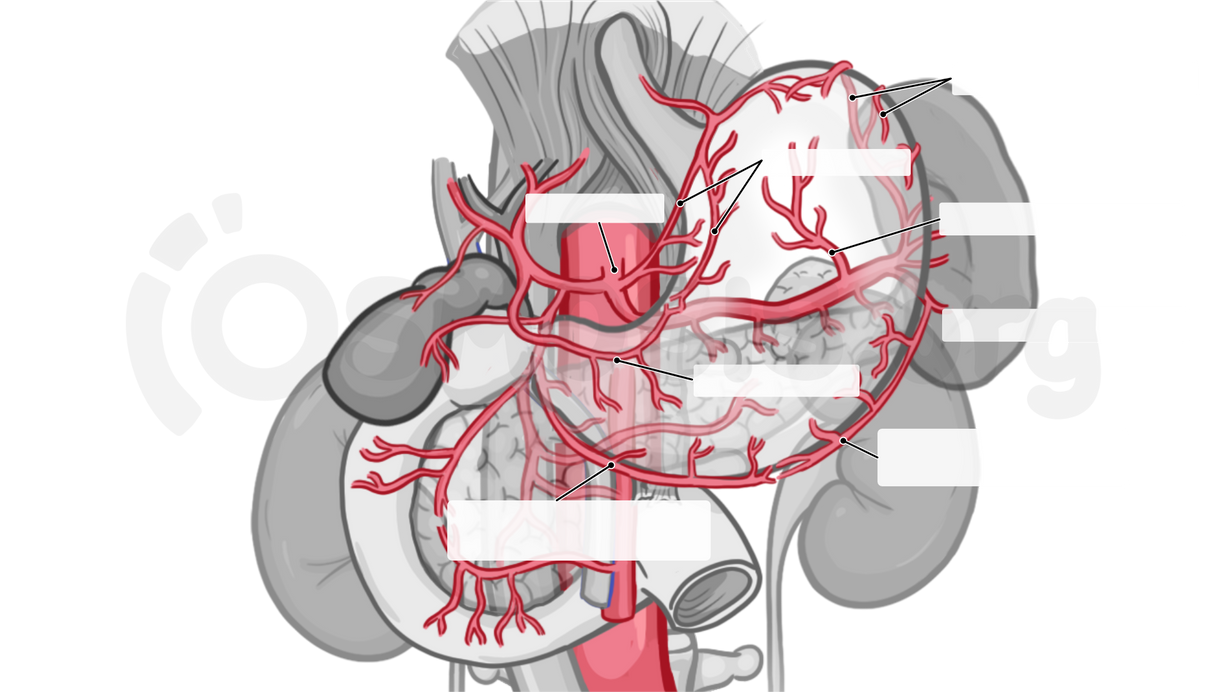 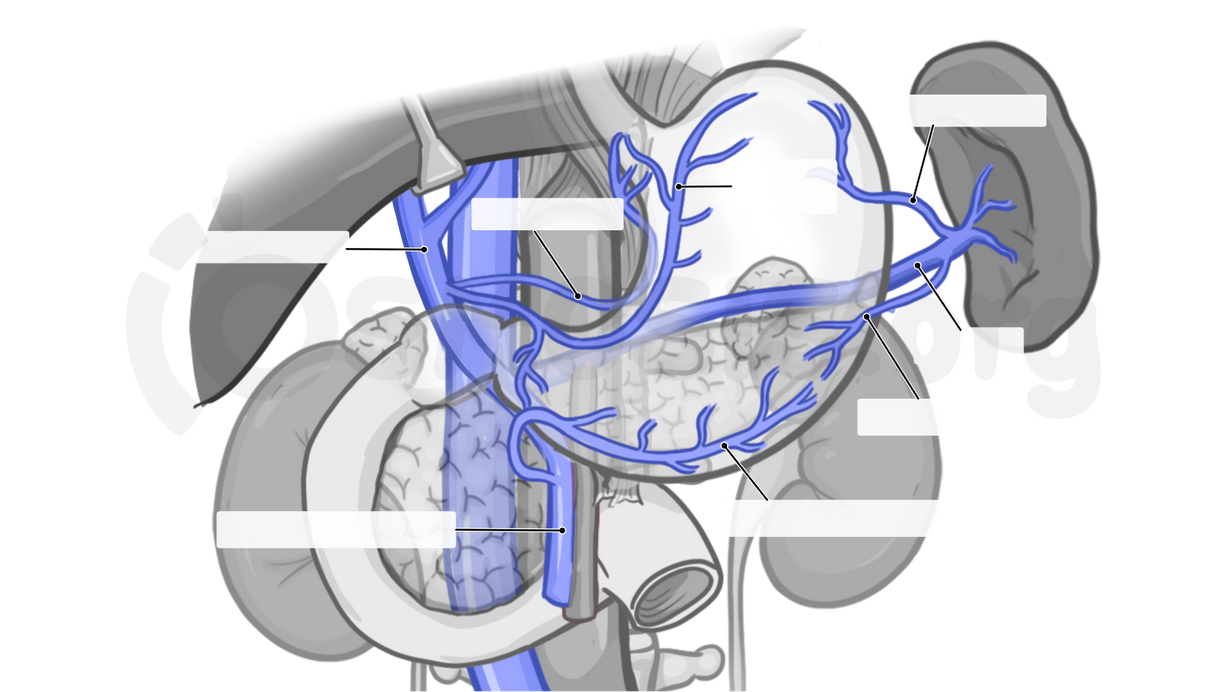 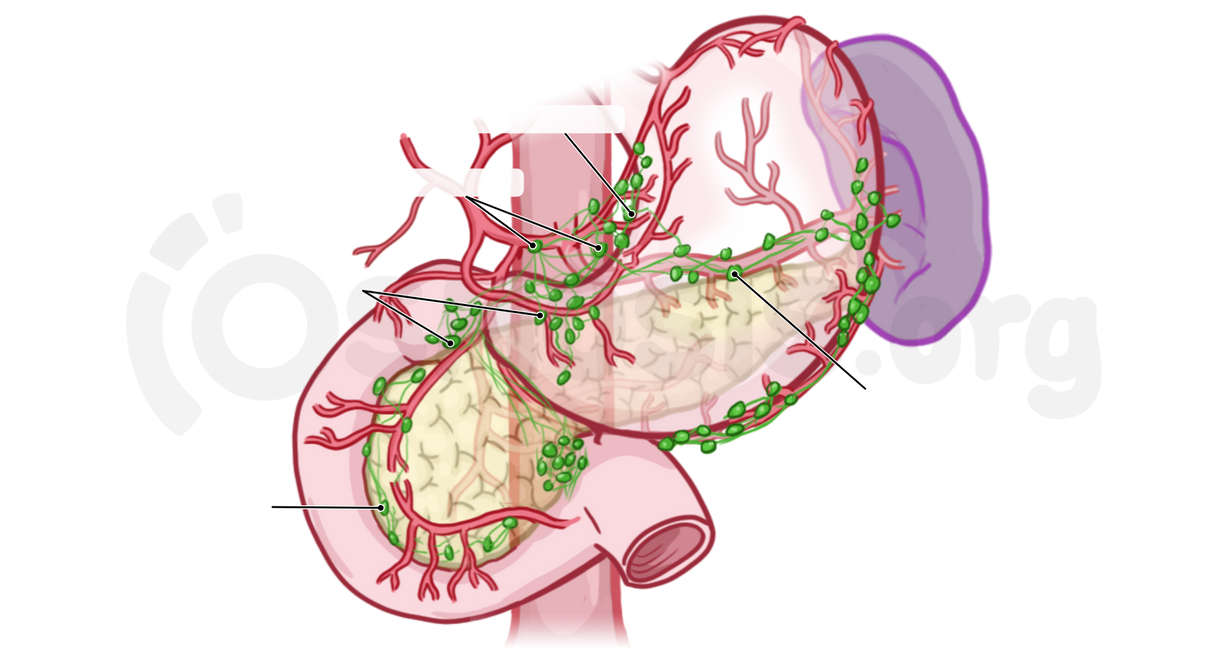 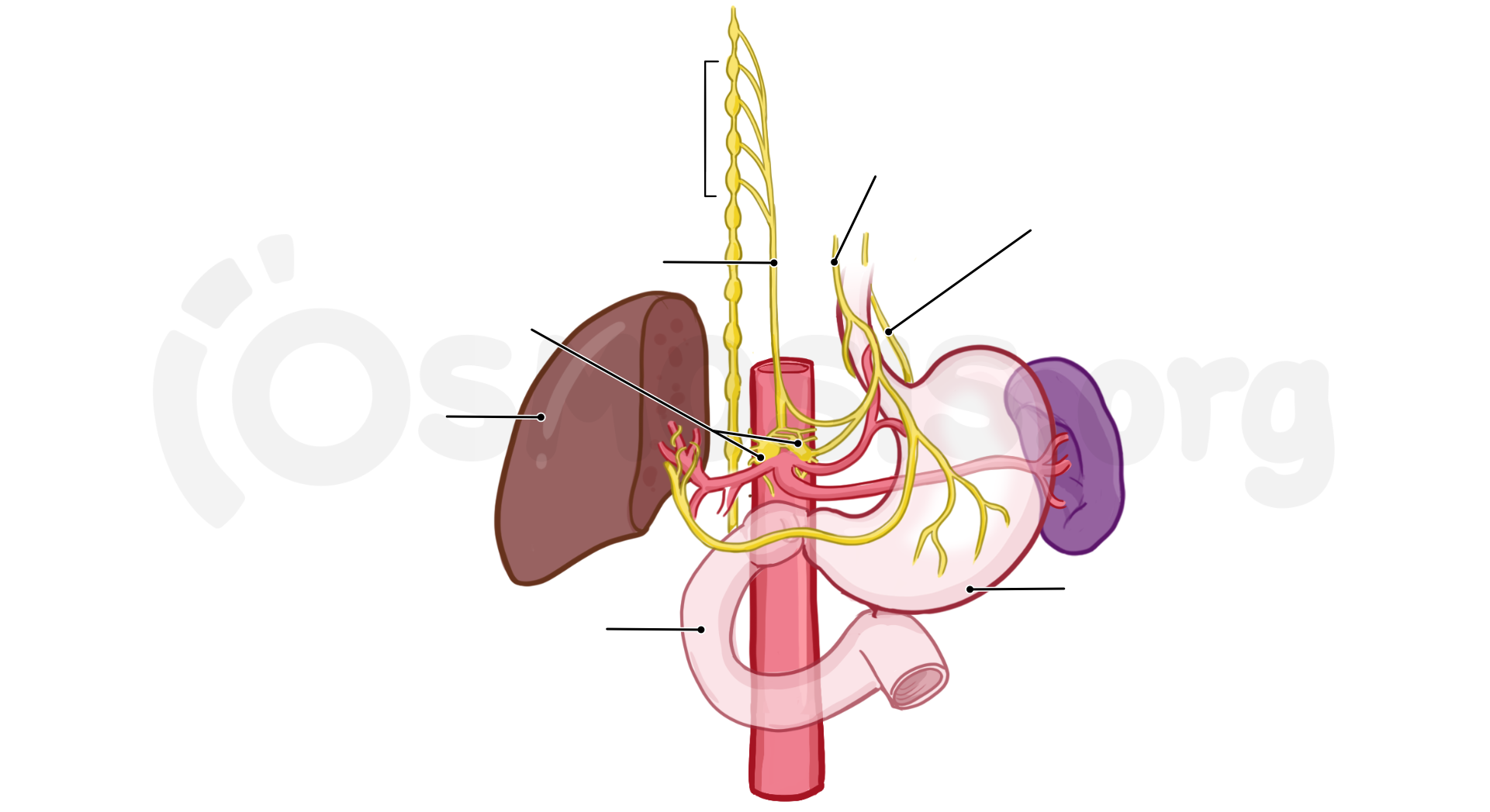 Osmosis knows that anatomy can be overwhelming, but hopefully this video on the esophagus and stomach can make it a bit easier, so let's begin “digesting” this content together! The esophagus and the stomach are part of the upper digestive tract and are involved in the first phases of digestion. We are going to use the pizza we ate for dinner last night as an example to help us explore the pathway of the esophagus and stomach.

Now, let’s start with the esophagus, which is a muscular tube that carries food from the pharynx to the stomach. We can think about the esophagus as a subway that our food travels in between these two structures. After the pizza we ate has been chewed and swallowed, the muscles of the esophagus help propel the bolus towards the stomach in a wave-like motion called peristalsis.

And as you’d expect, the middle third is a transitional segment that consists of a mix of both types of muscle. The esophagus follows the curve of the vertebral column as it descends through the neck and into the mediastinum.

It sits left of the midline at the level of the T11 vertebra and designates the esophagogastric junction, which is an important landmark where the mucosa abruptly changes from the stratified squamous epithelium of the esophagus to the simple columnar epithelium of the stomach.

The right border of the abdominal esophagus continues with the lesser curvature of the stomach, while its left border will eventually continue with the fundus of the stomach.

Now, to better visualize the esophagus and these constrictions, a barium swallow study can be performed which uses an x-ray imaging technique called fluoroscopy. The cervical constriction, also known as the upper esophageal sphincter, is located at the pharyngoesophageal junction and is caused by the cricopharyngeus muscle.

The thoracic or the broncho-aortic constriction can occur at two points where the esophagus is first crossed by the arch of the aorta, and then where it’s crossed by the left main bronchus.

Now let’s talk about blood supply! Proximally, the esophagus is supplied by branches of the inferior thyroid arteries. As we move distally, branches of the bronchial arteries and branches coming directly from the thoracic aorta supply the thoracic esophagus. The arterial supply of the abdominal esophagus is provided by the left gastric artery which is a branch of the celiac trunk, and the left inferior phrenic artery.

The venous drainage of the thoracic esophagus occurs via the inferior thyroid vein and tributaries of the azygos vein. The venous drainage of the abdominal esophagus has two routes: to the hepatic portal venous system through the left gastric vein, and into the systemic venous system through esophageal veins entering the azygos vein.

Its fibers synapse along the aorta - including at the celiac ganglia - before contributing to the esophageal plexus. Let’s take a quick break and try to identify the four anatomical areas of constrictions in the esophagus.

Now, let’s move on to the stomach, the next stop for our bite of pizza after its journey through the esophagus. The stomach acts as a reservoir for ingested food like our piece of pizza, and prepares it for digestion with the help of enzymes and gastric juice which gradually converts solid food into a semiliquid mixture called chyme - we can think about the stomach as our own endogenous food blender.

Now, the size, shape and position of the stomach can vary from person to person and may change even in the same person during movements such as respiration and body position. When lying supine, the stomach can occupy parts of the epigastric region, umbilical region, left hypochondriac region, and left lumbar region of the abdomen. On the other hand, when sitting upright, the stomach will move slightly inferior.

Now that we understand what the stomach does and its position within the body, let's dig into the external anatomical features of the stomach. The stomach has four parts: the cardia, the fundus, the body and the pyloric part, along with two curvatures: the lesser curvature and the greater curvature.

The cardia is the part surrounding the cardial orifice which is the superior opening of the stomach and where the esophagus connects to the stomach. The cardia is located at the level of the T11 vertebra.

In a supine position, the pyloric part is located at the level of the transpyloric plane, located at the L1 vertebra midway between the jugular notch superiorly and the pubic crest inferiorly, while in a standing position, its location varies from the L2 through L4 vertebra.

Let’s take another break and try to identify the parts of the stomach as well as the two curvatures.