A researcher is studying the autonomic pathways of the gastrointestinal system. Which of the following best characterizes parasympathetic innervation of the hindgut? 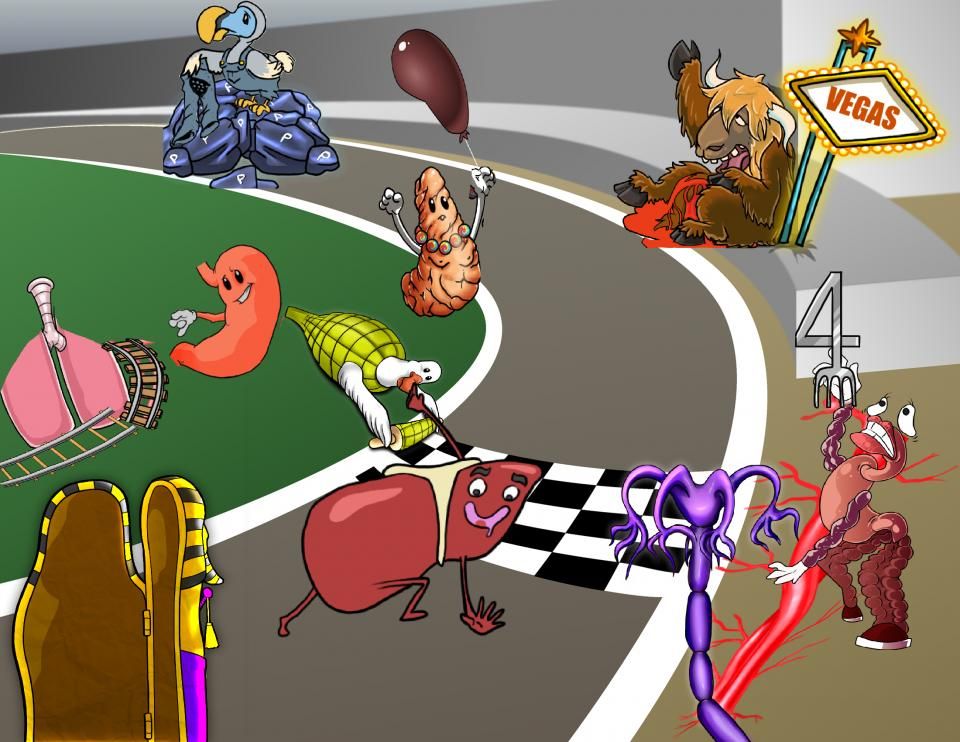 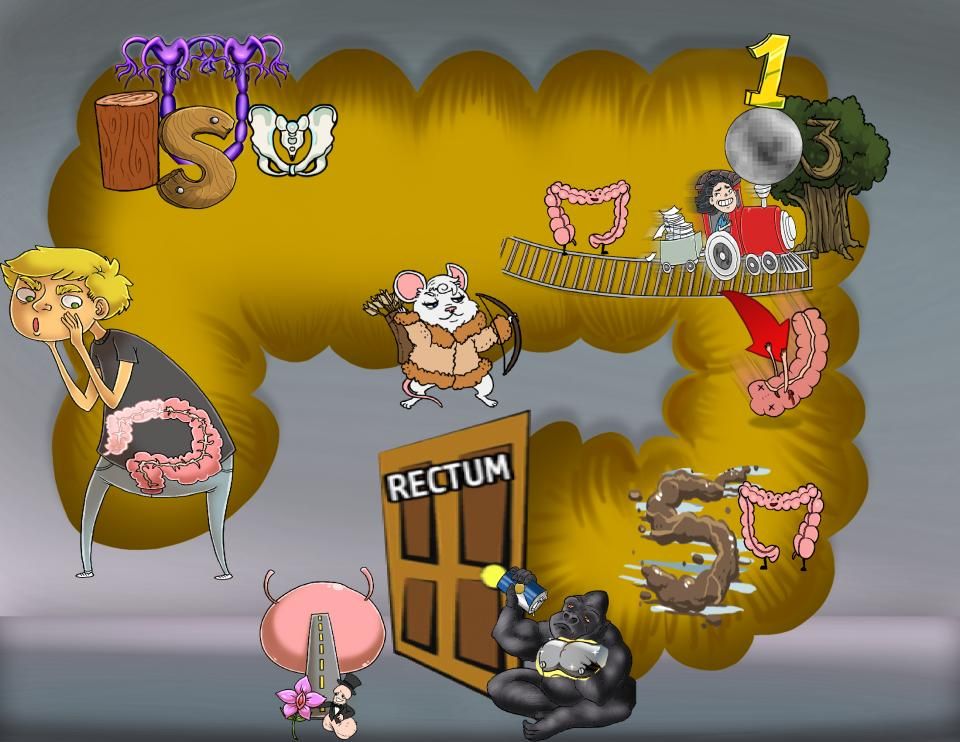 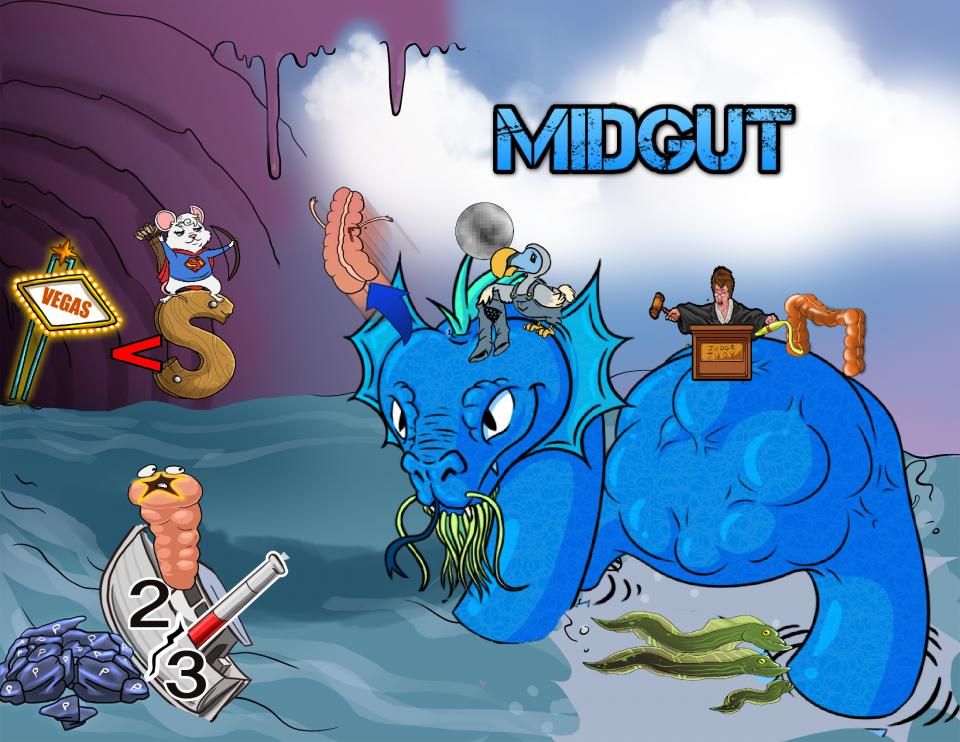 Most of our abdominal organs, also called abdominal viscera, are a part of the digestive system. These include the stomach, the small and large intestine, the liver, gallbladder and pancreas.

The abdomen is also home to other organs, like the spleen, kidneys, suprarenal glands, and the ureters, which play important roles in other systems.

All of these organs work involuntarily, so they’re innervated by the autonomic nervous system. And luckily so - can you imagine trying to voluntarily control digesting each vegetable in a salad?!

The sympathetic nervous system is our fight or flight response and increases heart rate and breathing rate, while slowing down digestion through reducing peristalsis and constricting blood vessels to the gut to reduce blood flow.

The parasympathetic nervous system is our rest and digest response and it slows down heart rate, and increases digestion by promoting peristalsis, gland secretion, and dilation of gut vessels for increased blood flow.

Alright, now, press pause, and see if you can tell whether the sympathetic or the parasympathetic nervous system promotes digestion!

Let’s take a deep dive by first looking at the sympathetic nervous system, which consists of the abdominopelvic splanchnic nerves, prevertebral ganglia, the abdominal aortic plexuses and their extensions, the periarterial plexuses.

Splanchnic nerves mean “nerves for the internal organs,” so they innervate the abdominal viscera. Abdominopelvic splanchnic nerves contain sympathetic fibers, which arise from cell bodies in the lateral horn of the gray matter of the spinal cord, from T5 to L2 or L3 spinal segments.

The fibers first pass through the anterior roots, the anterior rami, and the white rami communicantes of the thoracic and upper lumbar spinal nerves.

Sympathetic fibers pass through the paravertebral ganglia without synapsing, then they enter the different abdominopelvic splanchnic nerves, which carry these fibers to the prevertebral ganglia in the abdomen.

There are two major groups of abdominopelvic splanchnic nerves based on which part of the sympathetic trunk they arise from.

Let's first look at the sympathetic pathway for the lower thoracic splanchnic nerves, which enter the abdominal cavity by piercing through the crus of the diaphragm.

These nerves carry their preganglionic fibers to different ganglia located along the aortic plexuses, which are networks of nerve fibers overlying the abdominal aorta.

The greater splanchnic nerves, arising from T5 to T9, carry their fibers to the celiac ganglia which are located near the celiac arterial trunk.

After synapsing, the postganglionic fibres travel along periarterial plexuses to their target organs. Postganglionic fibres from the celiac ganglia travel along the plexus on the arterial branches from the celiac trunk, and they mainly provide sympathetic innervation to the foregut, meaning the stomach, and the proximal part of the duodenum. These fibres also innervate the liver, the gallbladder, pancreas, and spleen.

Now the postganglionic fibers from the superior mesenteric ganglion provide sympathetic innervation to the midgut; that is the part of the gut from the distal parts of the duodenum through the proximal two thirds of the transverse colon, including the small intestine.

The postganglionic fibers from the aortico-renal ganglion provide the sympathetic innervation to the kidneys and some preganglionic fibres travel through this ganglion to the adrenal medulla where they synapse directly with cells within it.

Preganglionic fibers of the lumbar splanchnic nerves synapse in the inferior mesenteric ganglion. Postganglionic fibers emerging from this ganglion provide sympathetic innervation to the hindgut which is the transverse colon, descending colon, sigmoid colon, and rectum.

Now, for a quick break. Can you remember where the greater splanchnic nerve synapses?

Alright, now let’s get into the “rest and digest” mood, and talk about the parasympathetic innervation of the abdominal viscera which comes from the anterior and posterior vagal trunks, and the pelvic splanchnic nerves.