Assessments
Anatomy of the anterior and medial thigh 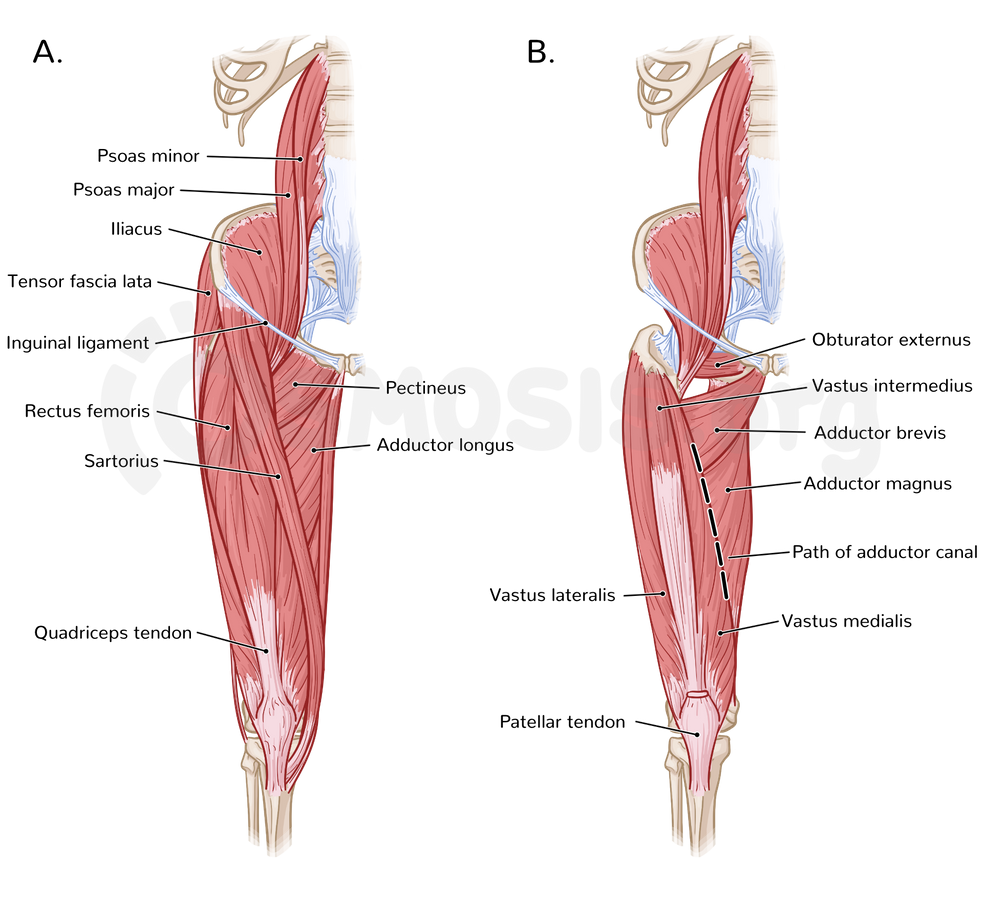 Figure 1: Anterior view of muscles of the anterior and medial thigh. A. Superficial muscles. B. Deep muscles. 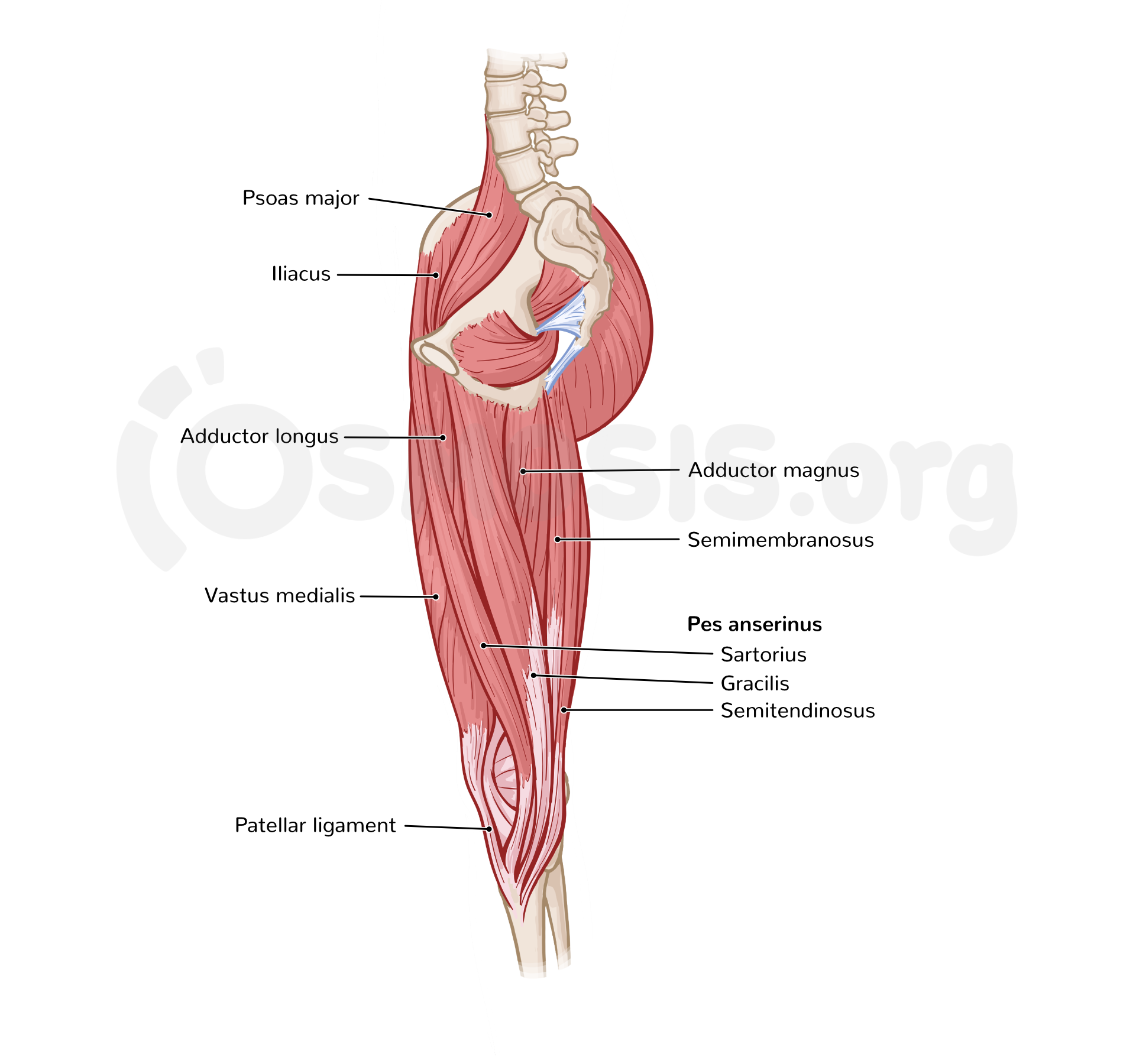 Figure 2: Medial view of muscles of the anterior and medial thigh. 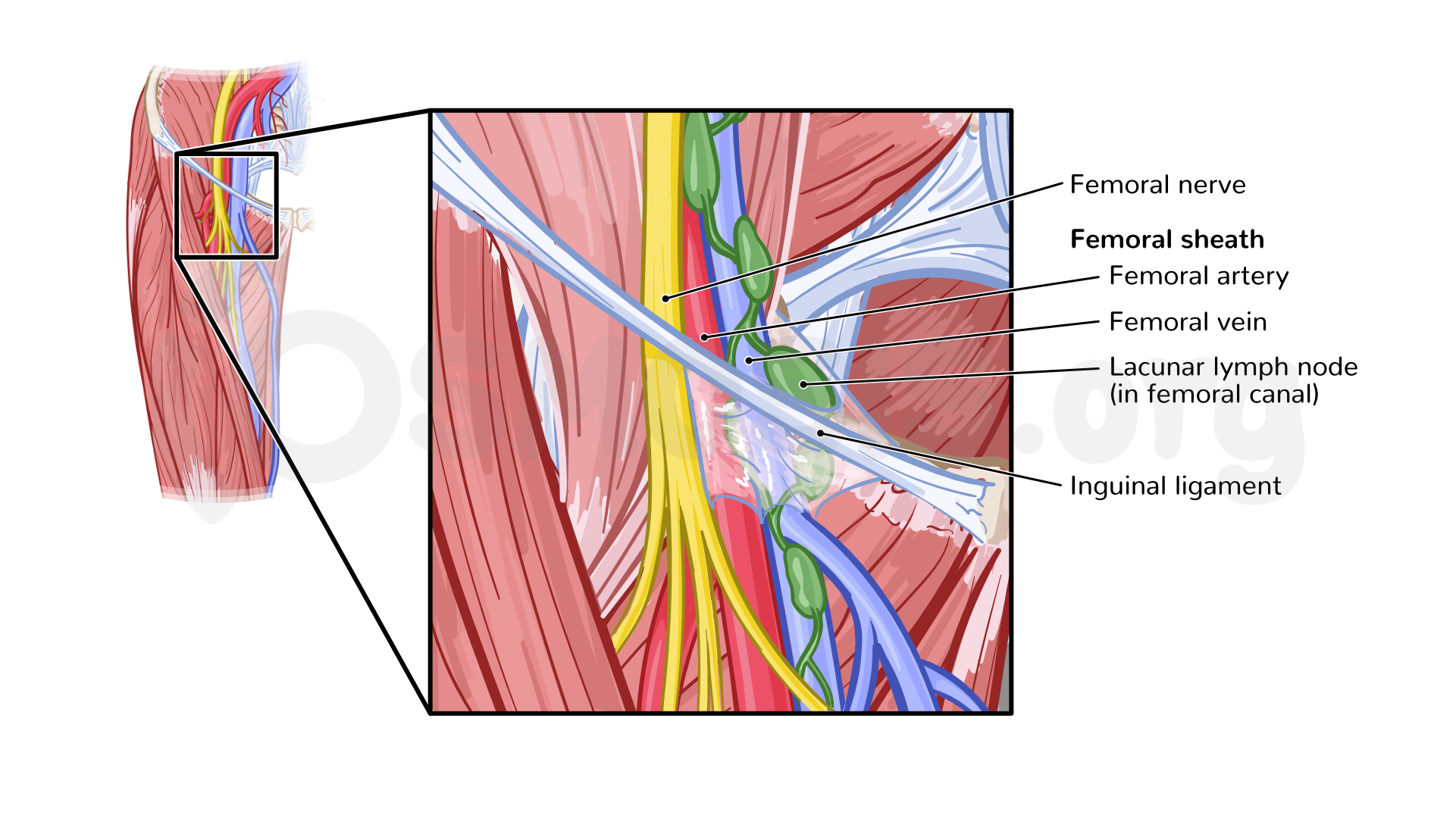 Figure 3: Contents of the femoral triangle. 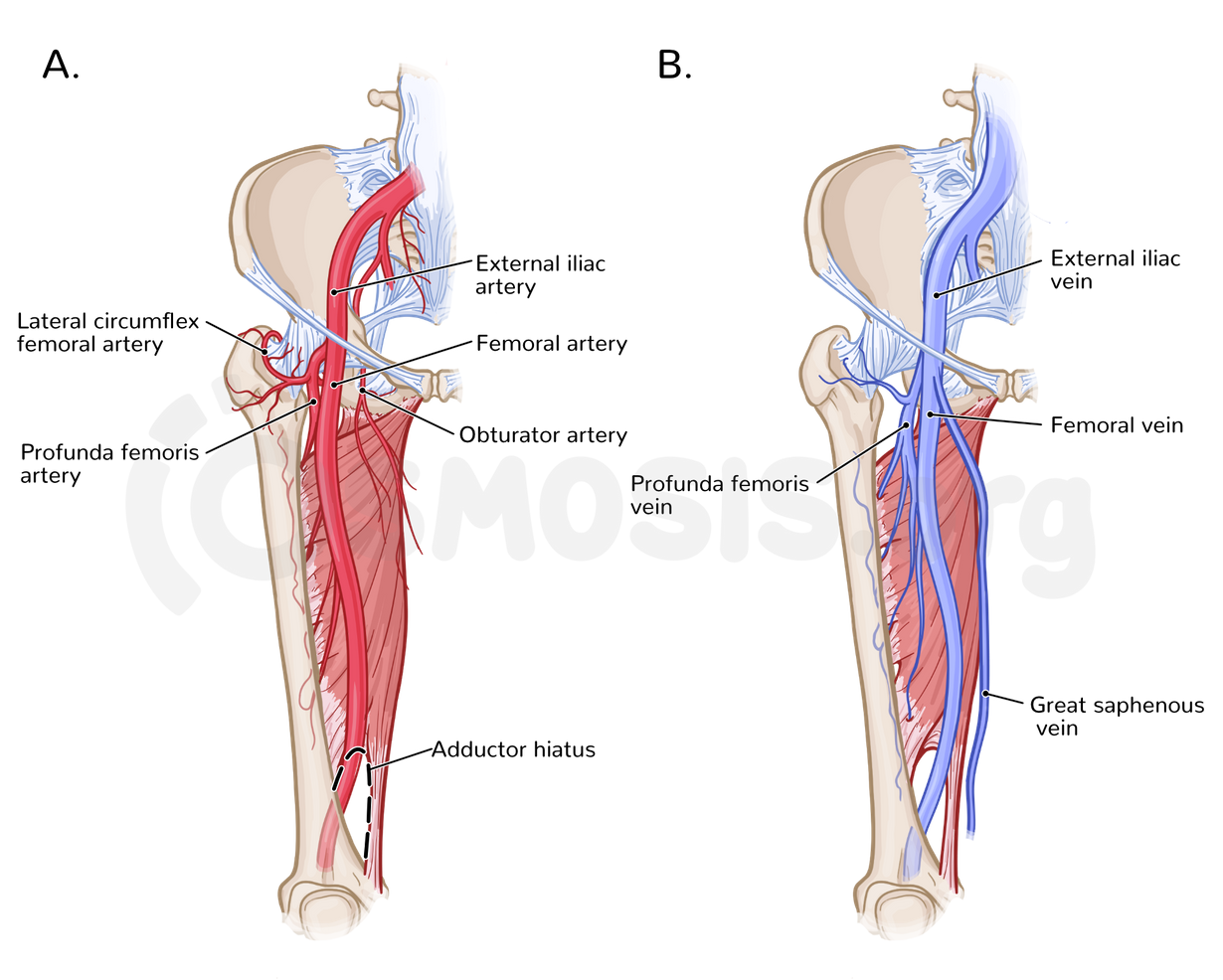 Figure 4: Vasculature of the anterior and medial thigh. A. Arteries and B. Veins. 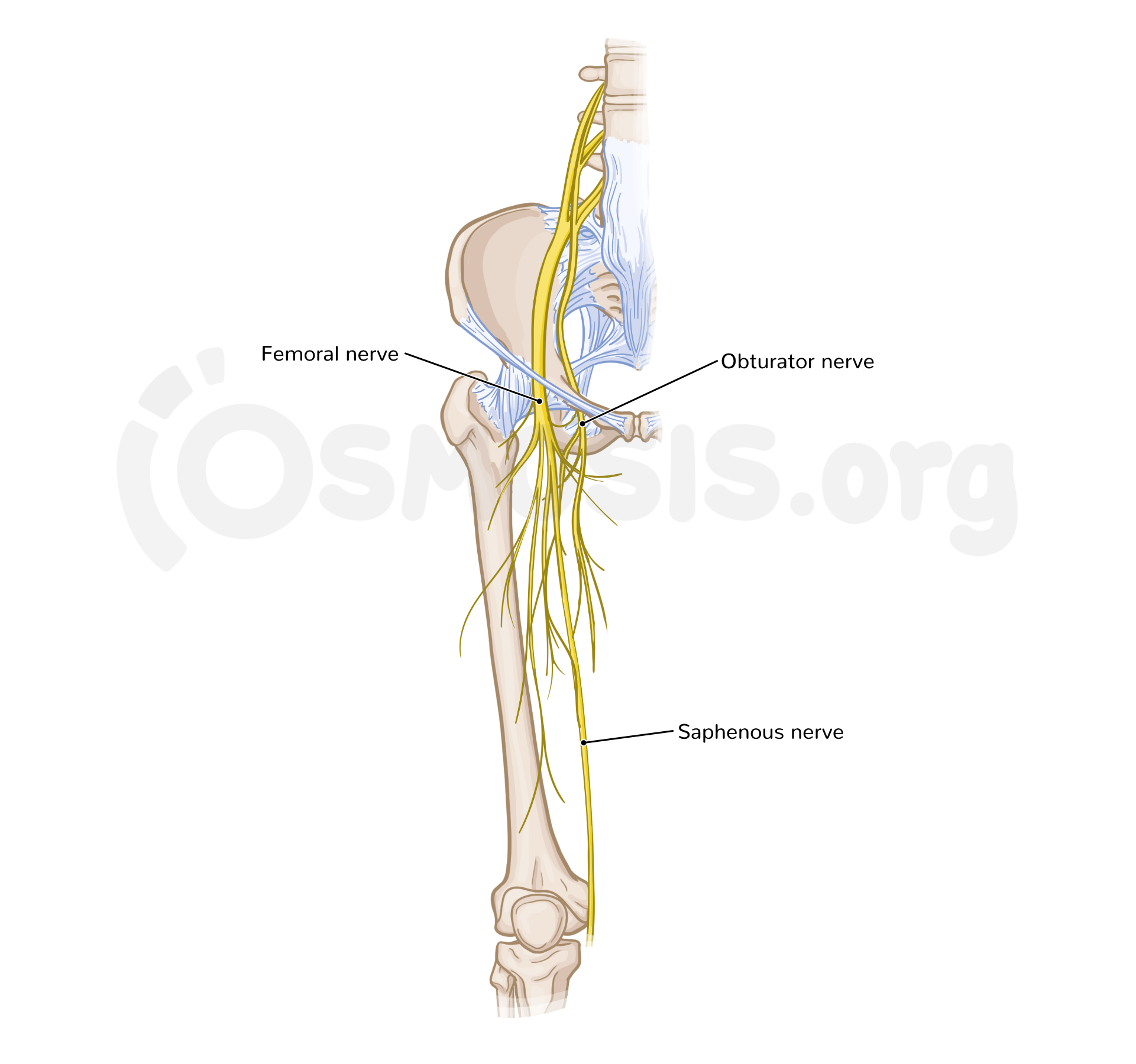 Figure 5: Nerves of the anterior and medial thigh. 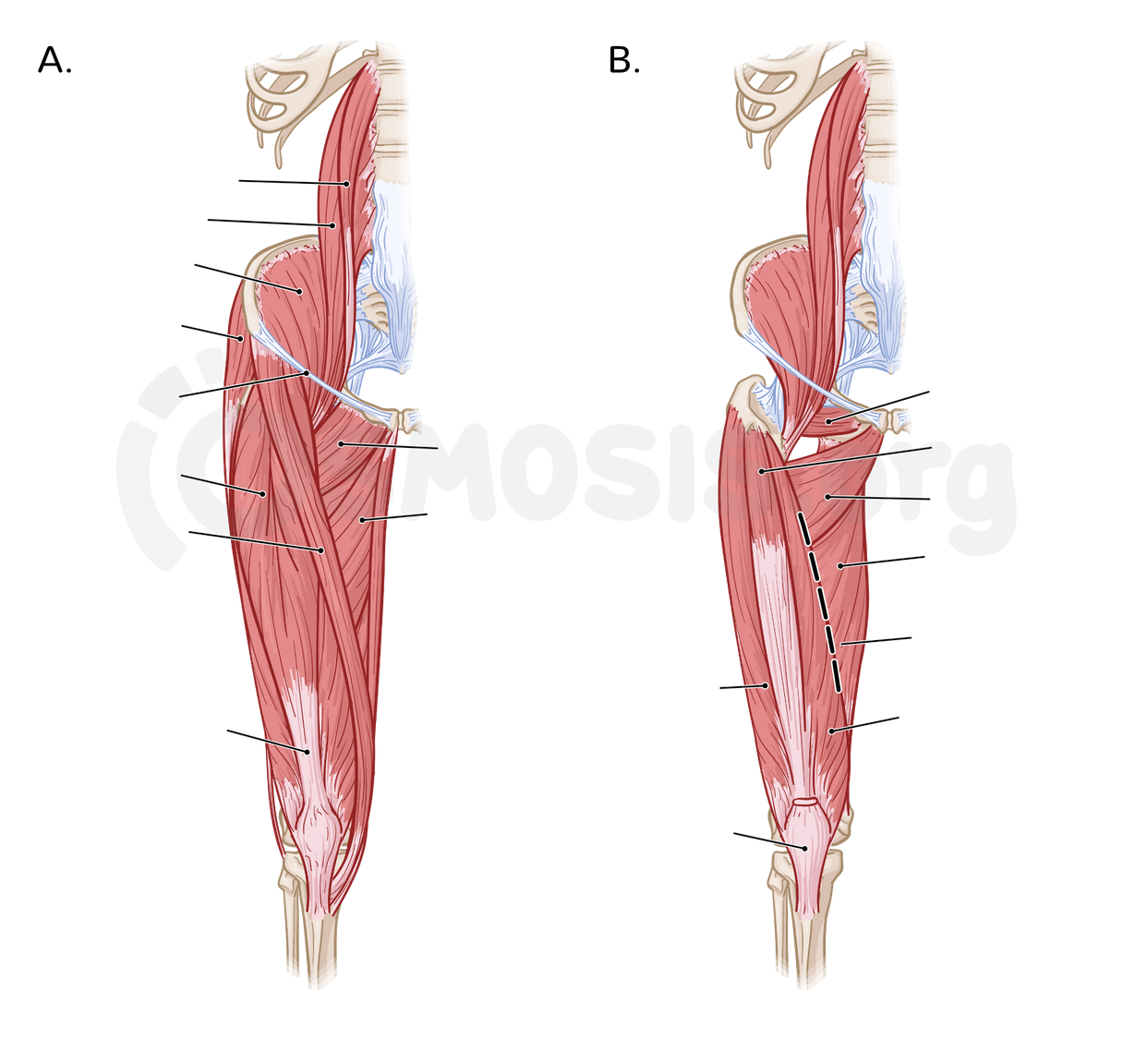 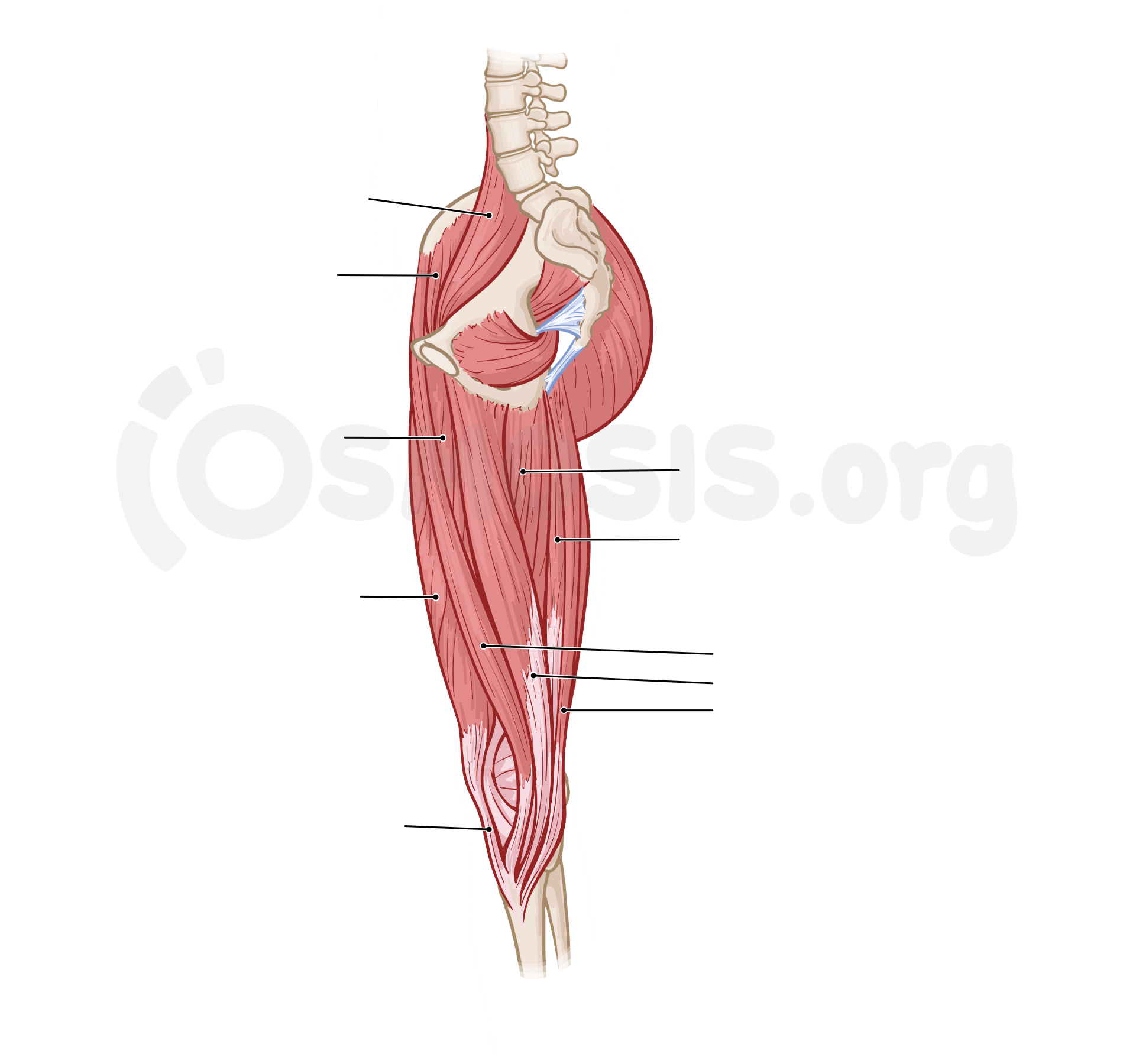 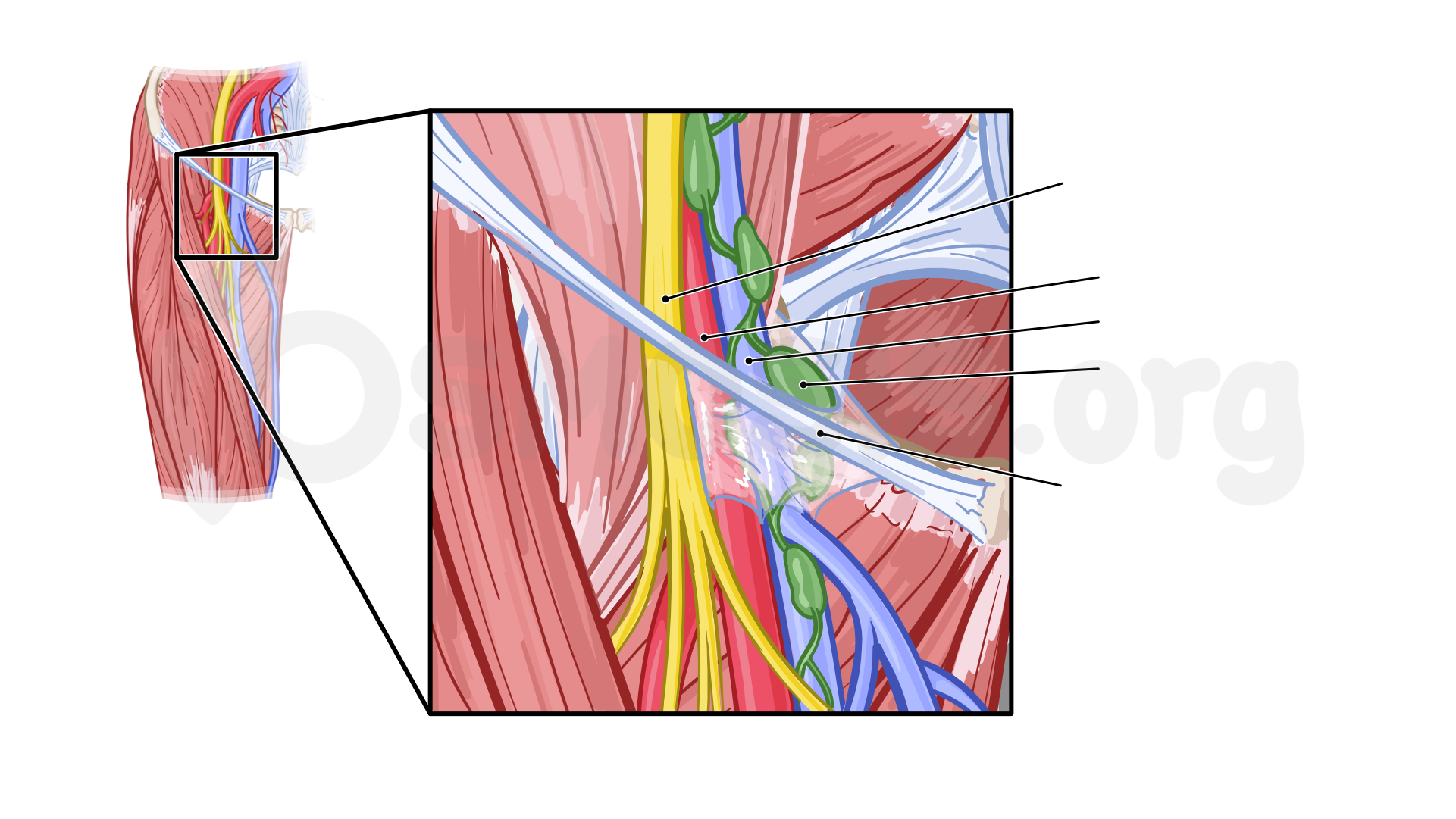 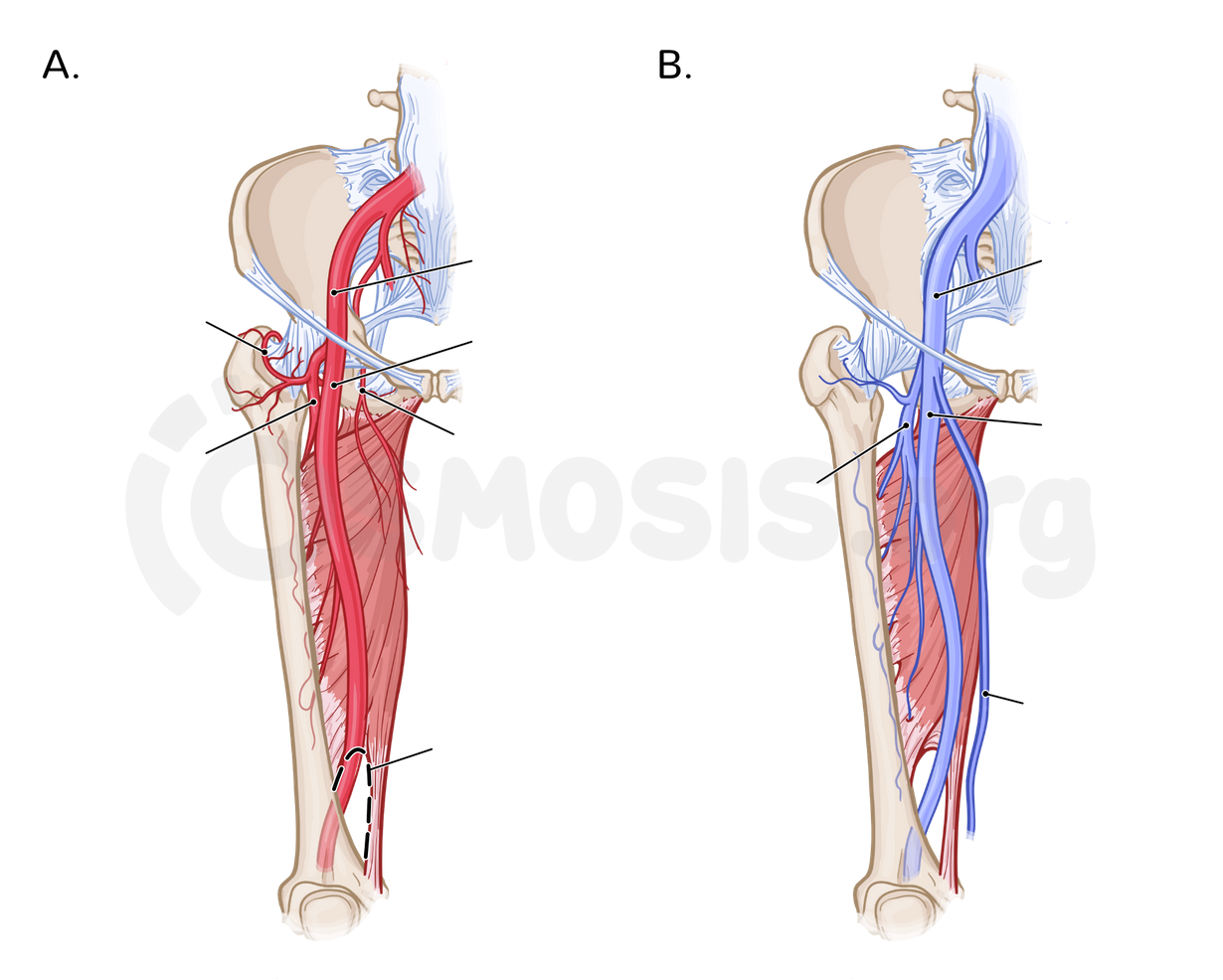 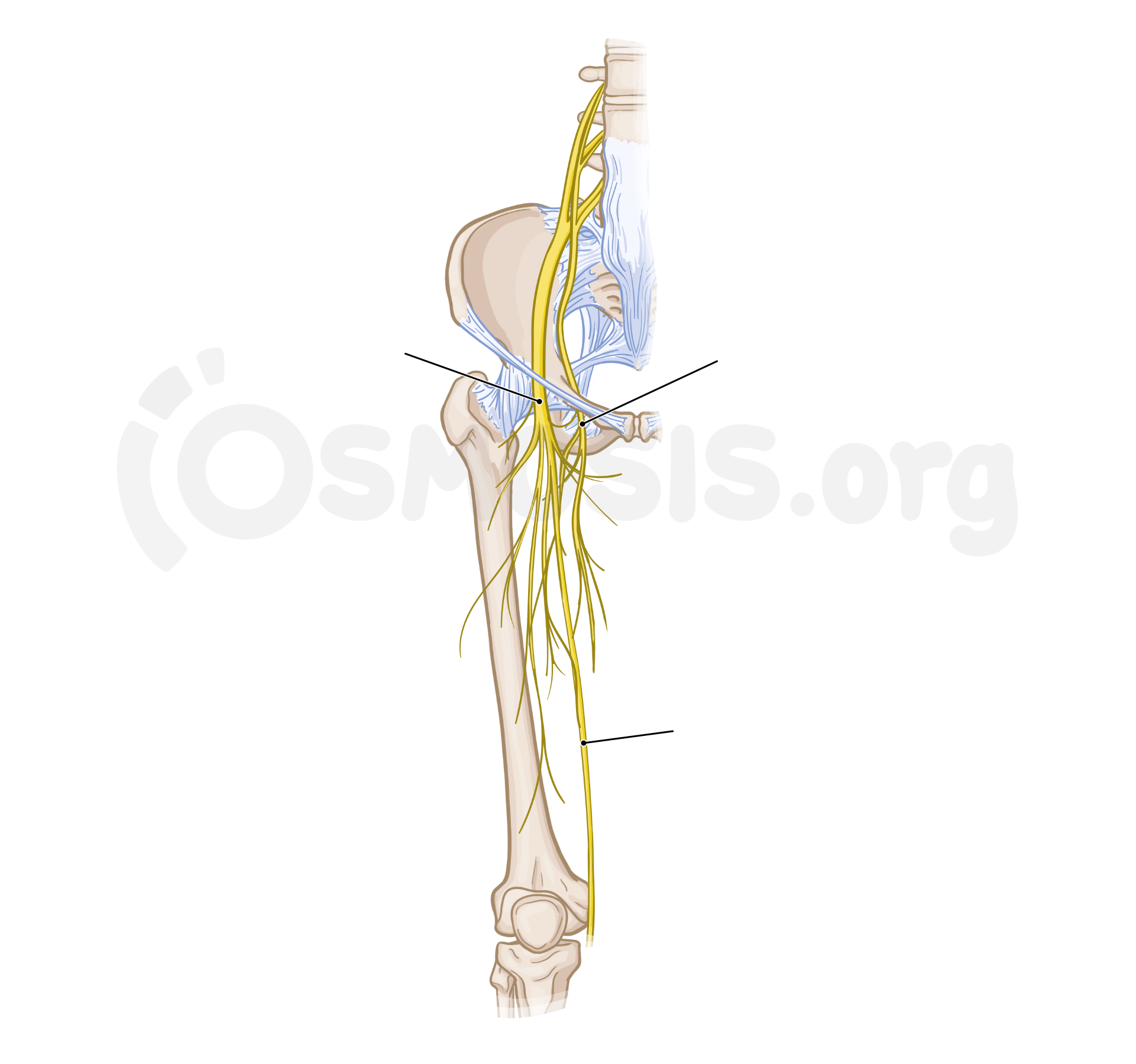 The obturator nerve is indicated in the image below. 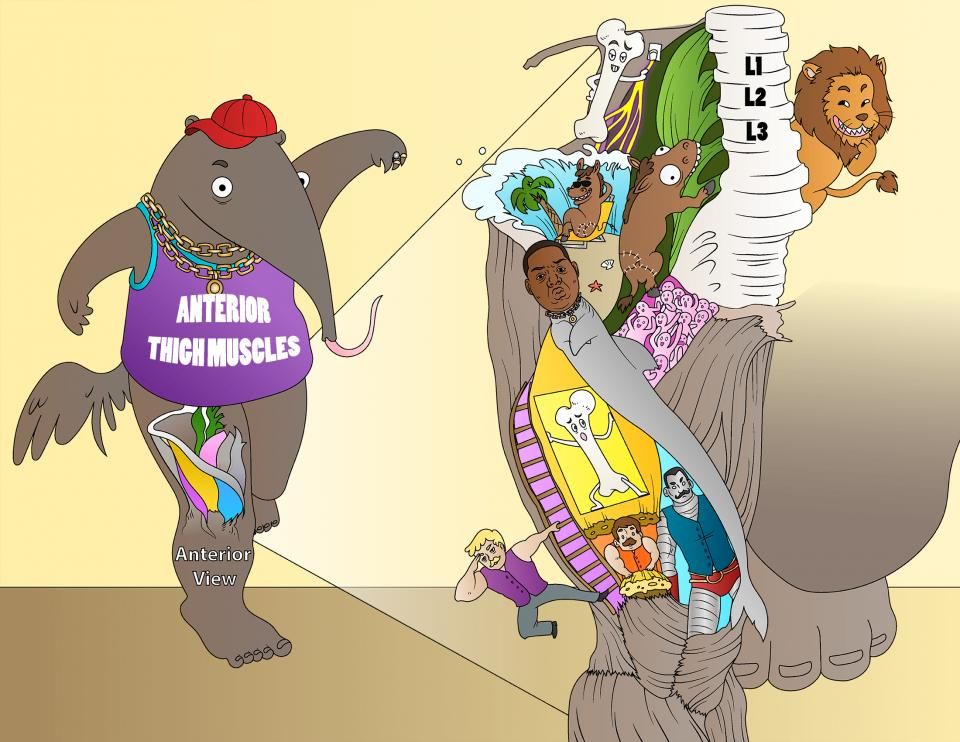 The thigh is the part of the lower limb located between the hip and the knee, and it can be divided into anterior, medial and posterior compartments that surround the femur. These compartments are formed by the intermuscular septa that originate on the inner surface of the fascia lata and attach to the linea aspera of the femur.

And, more importantly, each compartment contains its own muscles, as well as blood vessels and nerves. Each muscle in the three compartments has a proximal origin and distal insertion, a neurovascular supply, and a specific action on the joints of the lower limb.

The pectineus is an almost rectangular muscle located in the anterior part of the superomedial portion of the thigh, and it’s often composed of a superficial and deep layer. It originates on the superior ramus of the pubis and inserts on the pectineal line of the femur, just inferior to the lesser trochanter.

Now, this muscle has a lot of nerve, mainly because of its dual nerve supply. One supply is from the femoral nerve, and the second supply is from a branch of the obturator nerve. Finally, the pectineus has 3 main actions - it adducts, flexes, and medially rotates the thigh. This is one muscle, two nerves, and three actions!

Second, the iliopsoas is the most powerful of the hip flexors. It has most of its mass located in the posterior wall of the abdomen and greater pelvis. Actually, it consists of two parts. Its broad lateral part is called the iliacus muscle, which arises from the floor of the iliac fossa, ala of the sacrum, inner lip of the iliac crest, and anterior sacroiliac ligaments.

And its long medial part is called the psoas major. It originates from the sides of the T12 to L5 vertebrae and the discs between them, as well as the transverse processes of all lumbar vertebrae. Sometimes there’s another component, called the psoas minor which originates along the sides of T12 and L1 vertebrae and intervertebral discs, and attaches distally to the pectineal line and iliopectineal eminence.

Now, given the fact that the iliopsoas is the only muscle attached to the vertebral column, pelvis, and femur, it’s easy to understand why it is the chief flexor of the thigh at the hip joint and one of the flexors of the lumbar part of the vertebral column. The iliopsoas is also a postural muscle and stabilizer, and it’s active especially during standing when it helps maintain normal lumbar lordosis or curvature of the lumbar spine.

And third, the sartorius or the “tailor’s muscle,” - name given by the fact tailors would sit in a cross legged position while sewing which mimics the action of the muscle, it’s a long and ribbon-like muscle situated superficially in the anterior compartment, and within its own relatively well defined fascial sheath. It originates on the anterior superior iliac spine and the superior part of the notch underneath it.

From this point, it crosses the anterior thigh diagonally from lateral to medial, moving distally to the medial side of the knee, and it inserts on the superior part of the medial surface of the tibia. Regarding innervation, it has the same nerve supply as the iliacus, which is the femoral nerve.

Now, its attachments make the sartorius the longest muscle in the body and allow it to flex both the hip and the knee joints. It also weakly abducts the thigh and rotates it laterally. And when both sartorius muscles work together, they bring the lower limbs into the cross-legged sitting position.

Ok, now, when it comes to the extensors of the knee, we’re actually only talking about the quadriceps femoris muscle, which, in turn, has 4 components: the three vasti muscles - vastus lateralis, vastus intermedius, and vastus medialis, so named by their position around the femoral shaft, and the rectus femoris.

Together, the four components form the largest and one of the most powerful muscles of the body, which acts on both the hip and knee joints. Now let’s go through these one by one. The vastus lateralis is the largest of the four components. It lies on the lateral side of the thigh and originates on the greater trochanter and lateral lip of the linea aspera of the femur.

And finally, rectus femoris lies on top of vastus intermedius and it received its name because it runs straight down the thigh, rectus meaning straight in Latin. The muscle originates on the anterior inferior iliac spine and the ilium, just superior to the acetabulum.

This action is important when rising from sitting or squatting, during climbing and walking upstairs, and running and jumping. At the hip, it aids in hip flexion, through the action of rectus femoris as it is the only portion of the quadriceps that crosses the hip joint.

Additionally, the quadriceps is primarily responsible for absorbing the shock of heel strike, which is when the foot touches the ground heel-first during walking or running, and it functions as a hip fixator or stabilizer during bent-knee sports, such as skiing and tennis.

Now that was a muscle fatigue-inducing load of information! Let’s take a break and see if you can recall the origins and insertions of the anterior thigh muscles. Now let’s talk about the muscles of the medial compartment of the thigh, which form the adductor group. This group is made up of five muscles - adductor magnus, adductor brevis, adductor longus, gracilis, and obturator externus.

These function together to adduct the thigh, and stabilize the stance when standing on both feet or during side to side movement while standing. First, adductor magnus is the largest, most powerful, and most posterior muscle in the adductor group. It is a triangular muscle with the tip towards the pubic bone and a thick, medial base.

The base is divided into two parts. The superior segment is called the adductor part and it originates on the inferior rami of the pubis and ischium, and then it fans out widely for aponeurotic attachment to the gluteal tuberosity, entire length of linea aspera, and medial supracondylar line of the femur.

Second, adductor brevis, or the short adductor, lies underneath the pectineus and adductor longus, where it arises from the body and inferior ramus of the pubis. As it travels distally, the muscle widens to attach to the pectineal line and proximal part of the linea aspera. When the obturator nerve emerges from the obturator canal to innervate muscles in the medial compartment, it divides into an anterior and posterior division, with these two divisions passing anterior and posterior to the adductor brevis.

Third, adductor longus, or the long adductor, is a large, triangular muscle that arises from the body of the pubis, just inferior to the pubic crest, where the apex of the triangle is. It then moves on to attach to the middle third of the linea aspera of the femur - where the base of the triangle is.

In doing so, it covers the anterior aspects of the adductor brevis and the middle of the adductor magnus. It’s also supplied by the obturator nerve and branches of its anterior division, and its main action is to adduct the thigh.

Fourth, gracilis, meaning slender in Latin, is a long, strap-like muscle situated medially and superficially. Now, the muscle originates on the body and inferior ramus of the pubis but its insertion on the superior part of the medial surface on the tibia is a bit more complicated.

This is because gracilis joins the sartorius and semitendinosus, a muscle of the posterior compartment, to form a common tendinous insertion, called the pes anserinus or the goose’s foot because it resembles, you know, a goose’s foot.

Pes anserinus goes and inserts on the superior part of the medial surface of the tibia, and you can actually use the mnemonic Say Grace before Tea to remember the order of their insertion on the tibia: Sartorius is the most anterior of the muscles, followed by Gracilis, and then by the semiTendinosus, which is the most posterior muscle of the pes anserinus.

And finally, gracilis is supplied by the obturator nerve and acts to adduct, flex, and medially rotate the thigh as well as add stability to the medial aspect of the knee in extension. And fifth, the obturator externus is a flat, relatively small, fan-shaped muscle that is deeply placed in the superomedial part of the thigh.

Phew! That was a very longus section that could’ve been more brevis. Let’s relax for a bit and try and recall the origins and insertions of the medial thigh muscles. Now, before we move on to the other components, let’s talk a bit about the particularities of the anterior and medial compartments.

From lateral to medial, NAVEL stands for femoral Nerve and its terminal branches; femoral Artery and several of its branches; femoral Vein and its proximal tributaries; the Empty space where the femoral canal is; and the deep inguinal Lymph nodes and associated lymphatic vessels.

Another important element within the femoral triangle is the femoral sheath, which is a funnel-shaped fascial tube that houses the proximal parts of the femoral artery, vein, and deep inguinal lymph nodes. The tube is formed behind the inguinal ligament by a downward extension of the transversalis fascia anteriorly and iliopsoas fascia posteriorly.