Assessments
Anatomy of the coronary circulation

Anatomy of the Coronary Circulation 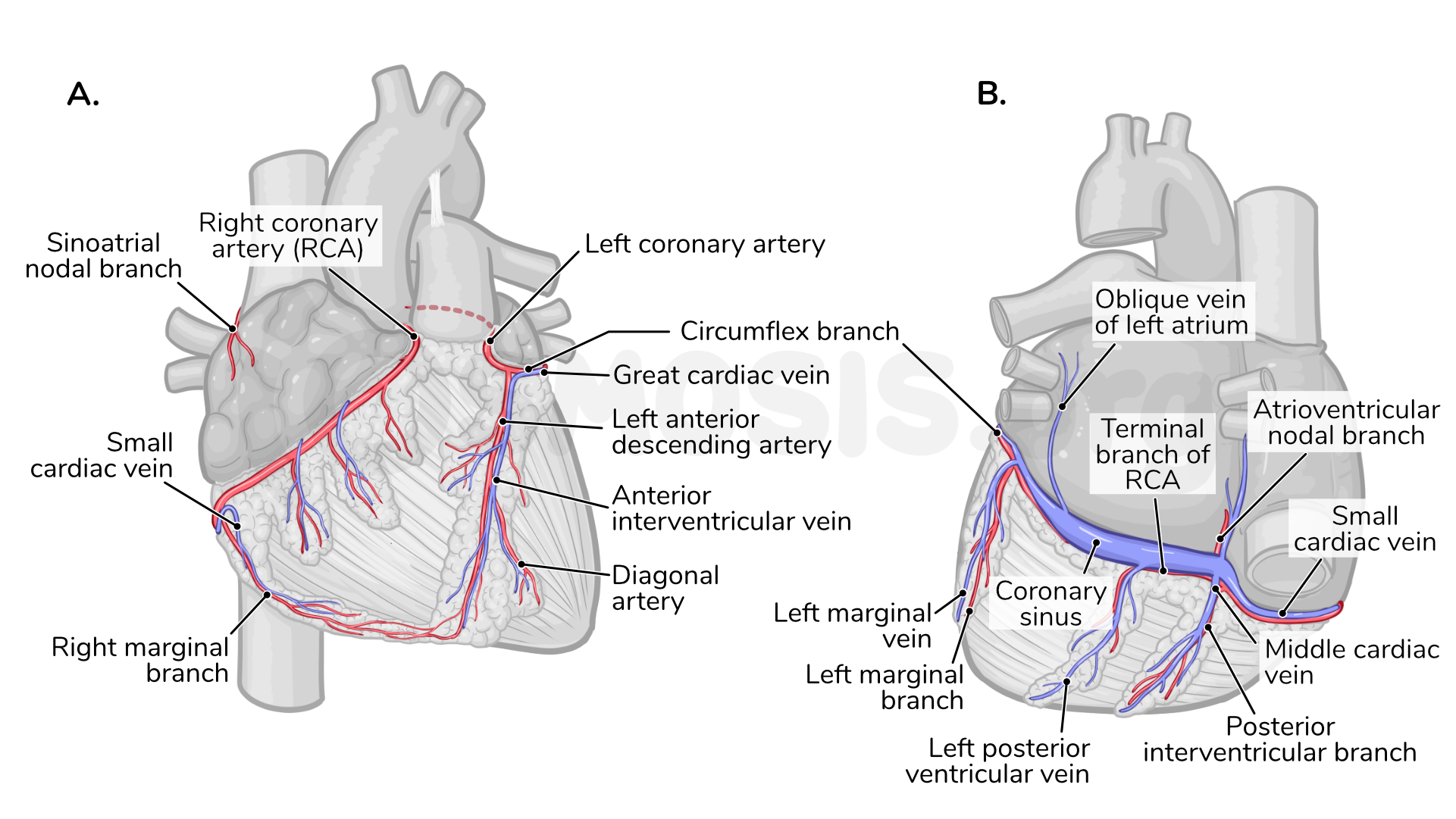 Figure 1. A Anterior and B posterior views of the coronary circulation. 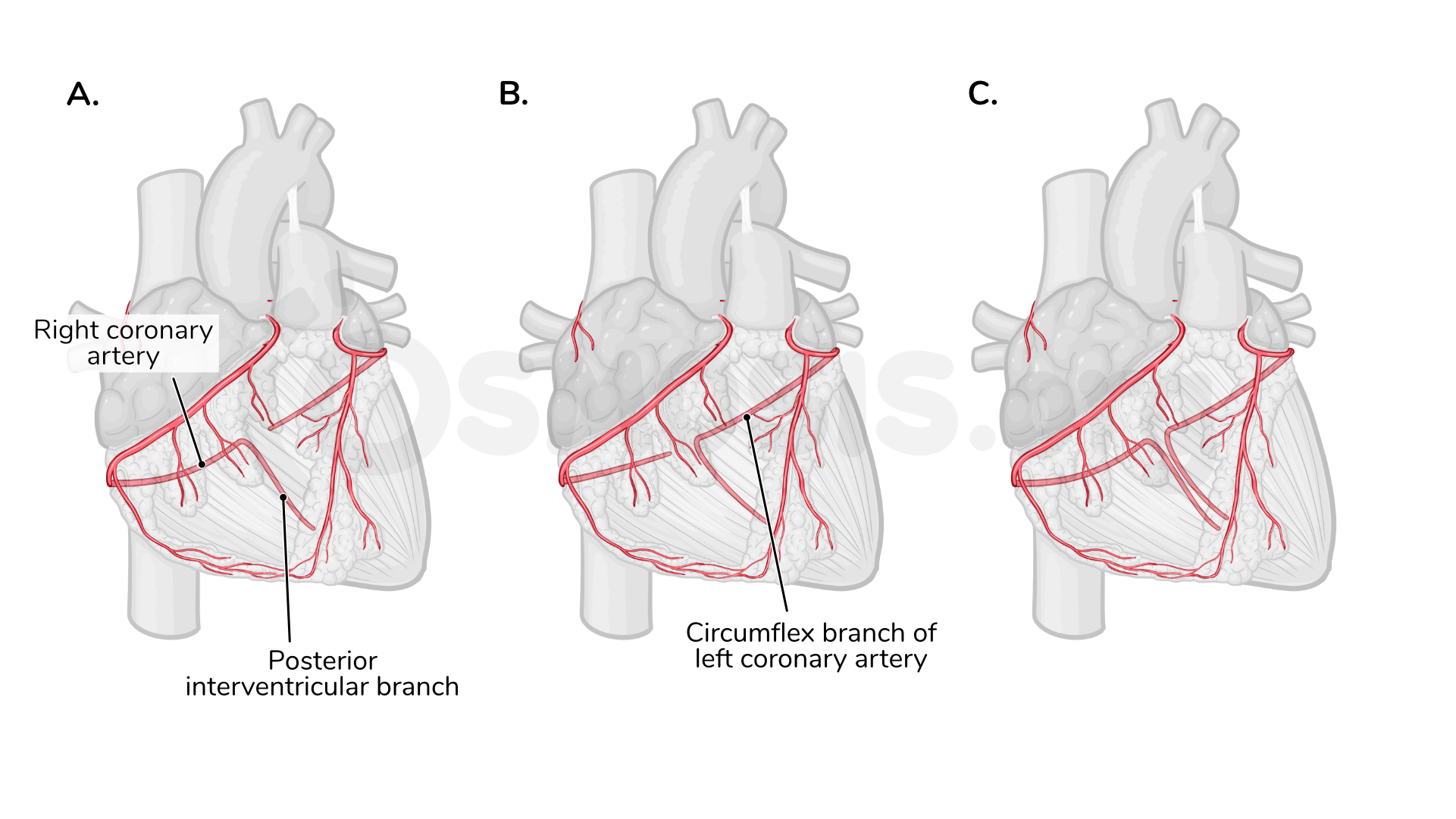 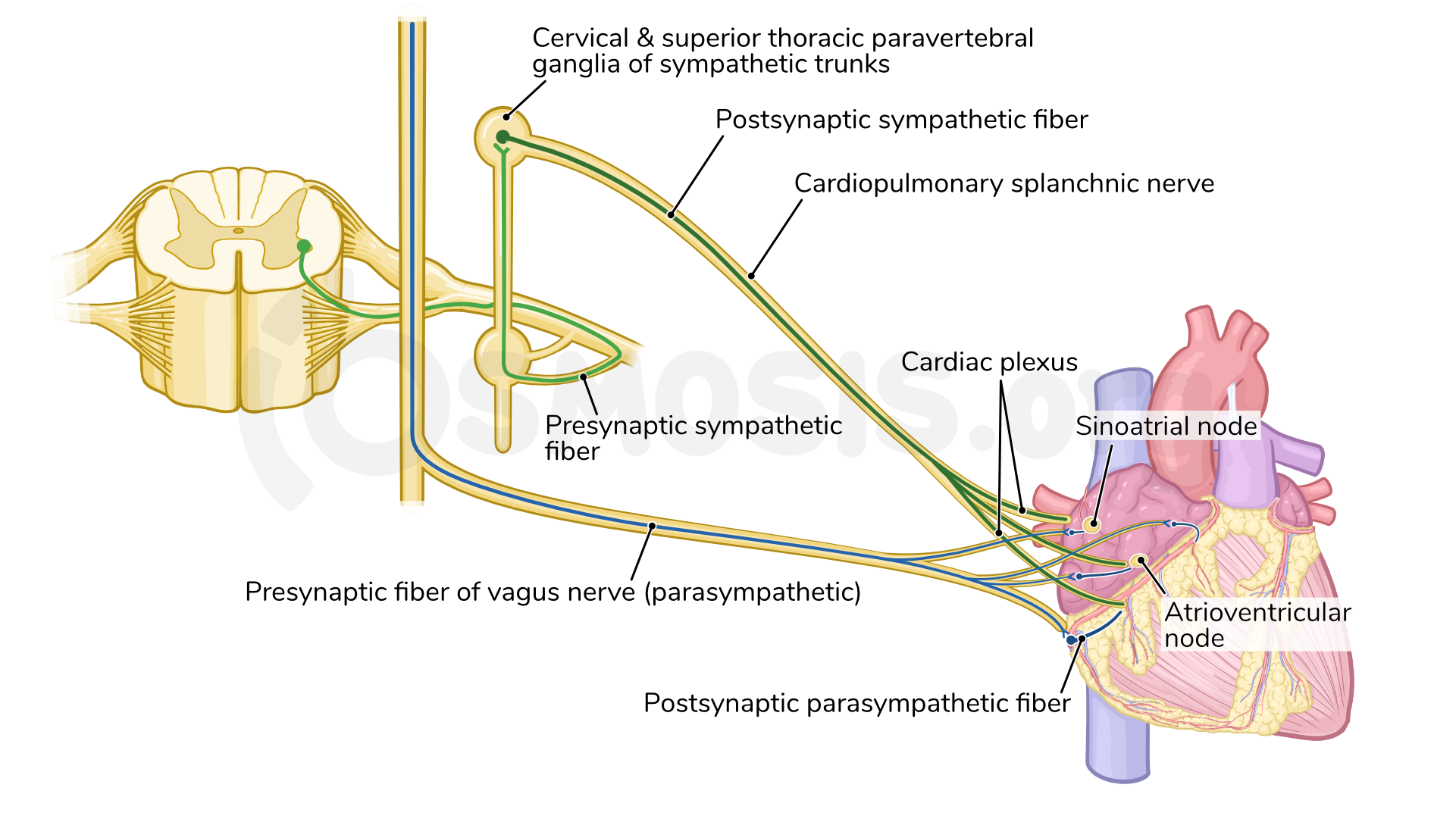 Figure 3. Diagrammatic view of the sympathetic and parasympathetic innervation of the heart. 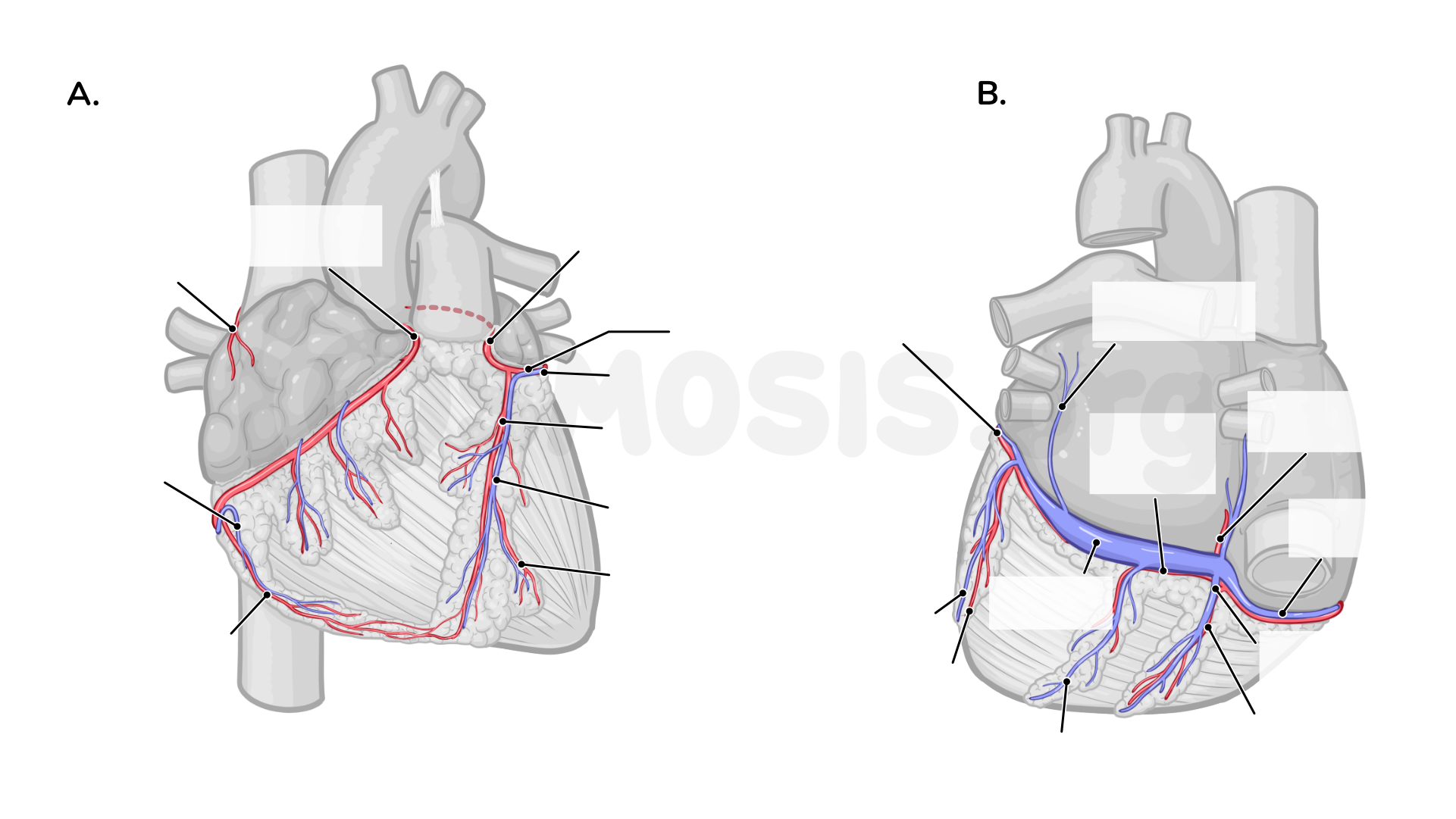 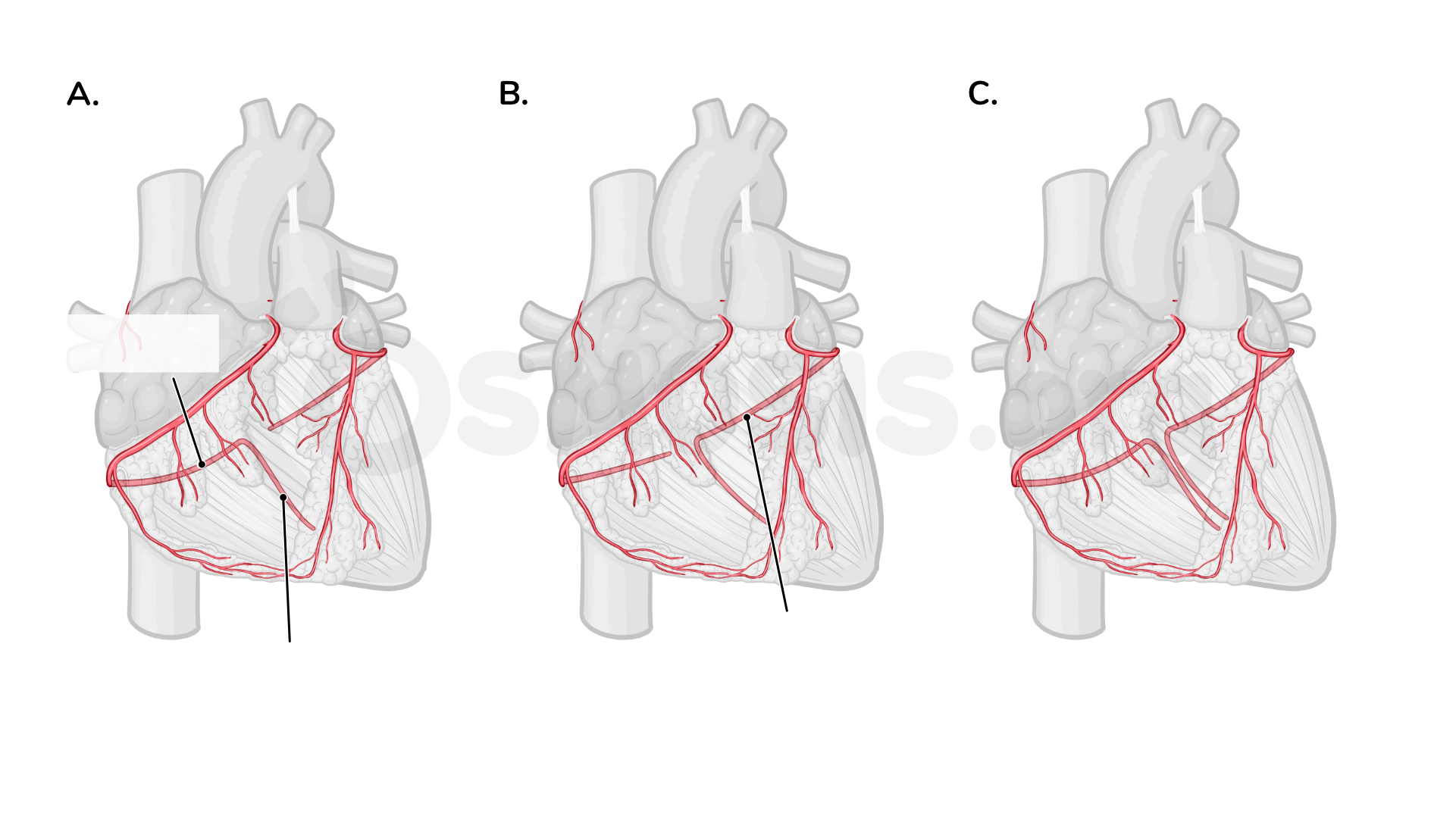 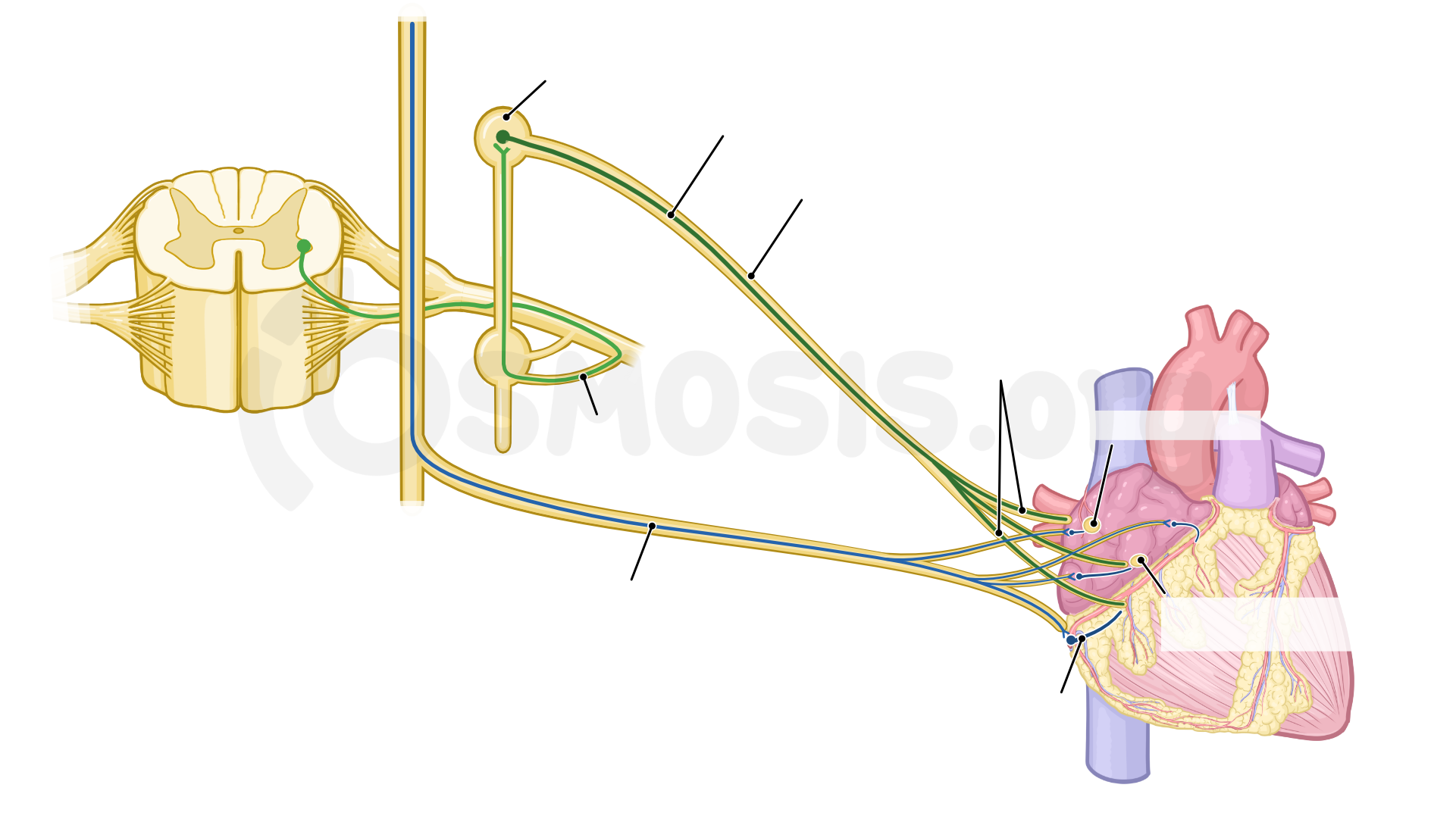 A 65-year-old man presents to the emergency department because of episodic, burning substernal chest pain. According to past medical records, the patient has a right-dominant circulation. A myocardial perfusion scan reveals inducible ischemia in the posteroinferior surface of the heart. This region of the heart is supplied by which of the following vessels?

Our hearts are responsible for sending blood throughout our body and bringing it back to our lungs in a constant exchange of oxygenated and deoxygenated blood.

Here at Osmosis, we also think your hearts are responsible for ‘starting with the heart’ and showing us love every time you watch one of our videos!

But remember, the heart itself also needs its own blood supply, called the coronary circulation, which it gets from the right and left coronary arteries.

The coronary arteries are embedded in fat, and course across the surface of the heart just deep to the epicardium.

Let’s begin with the right coronary artery or RCA, which has its origin in the right aortic sinus and passes to the right side of the pulmonary trunk.

Close to its origin, the RCA gives a sinoatrial nodal branch, which supplies the sinoatrial node. The RCA then descends in the coronary sulcus.

Along the way, it gives off the right marginal branch, which gets close to the apex, but doesn’t reach it and supplies the right border of the heart.

After giving this branch, the RCA turns to the left and continues its journey in the coronary sulcus posteriorly.

Here, the RCA gives yet another branch, the atrioventricular nodal branch, which supplies the AV node.

This branch supplies areas of both ventricles and sends perforating interventricular septal branches into the IV septum.

Finally, the terminal branch of the RCA continues for a short distance in the coronary sulcus.

The left coronary artery or LCA originates from the left aortic sinus and passes between the left auricle and the left side of the pulmonary trunk and gets in the coronary sulcus.

The anterior IV branch supplies parts of both ventricles and the anterior two thirds of the interventricular septum through septal branches.

In many people, this branch gives rise to the lateral branch or diagonal artery which descends to the anterior surface of the heart.

Now, the circumflex artery runs in the coronary sulcus around the left border of the heart towards the posterior surface of the heart.

On its way, it gives the left marginal branch which also has many tiny branches that supply the left ventricle.

Most commonly, the circumﬂex branch of the LCA terminates in the coronary sulcus on the posterior aspect of the heart prior to the crux of the heart.

The LCA typically supplies: the left atrium, most of the left ventricle, part of the right ventricle, the anterior two thirds of the IVS, including the AV bundle, through perforating IV septal branches and the sinu-atrial node in some people.

And the reason for all the “somes” and “usuallys” is because there is something called dominance of the coronary arterial system, which refers to whether the right or left coronary artery gives off the posterior interventricular branch.