Assessments
Anatomy of the cranial base 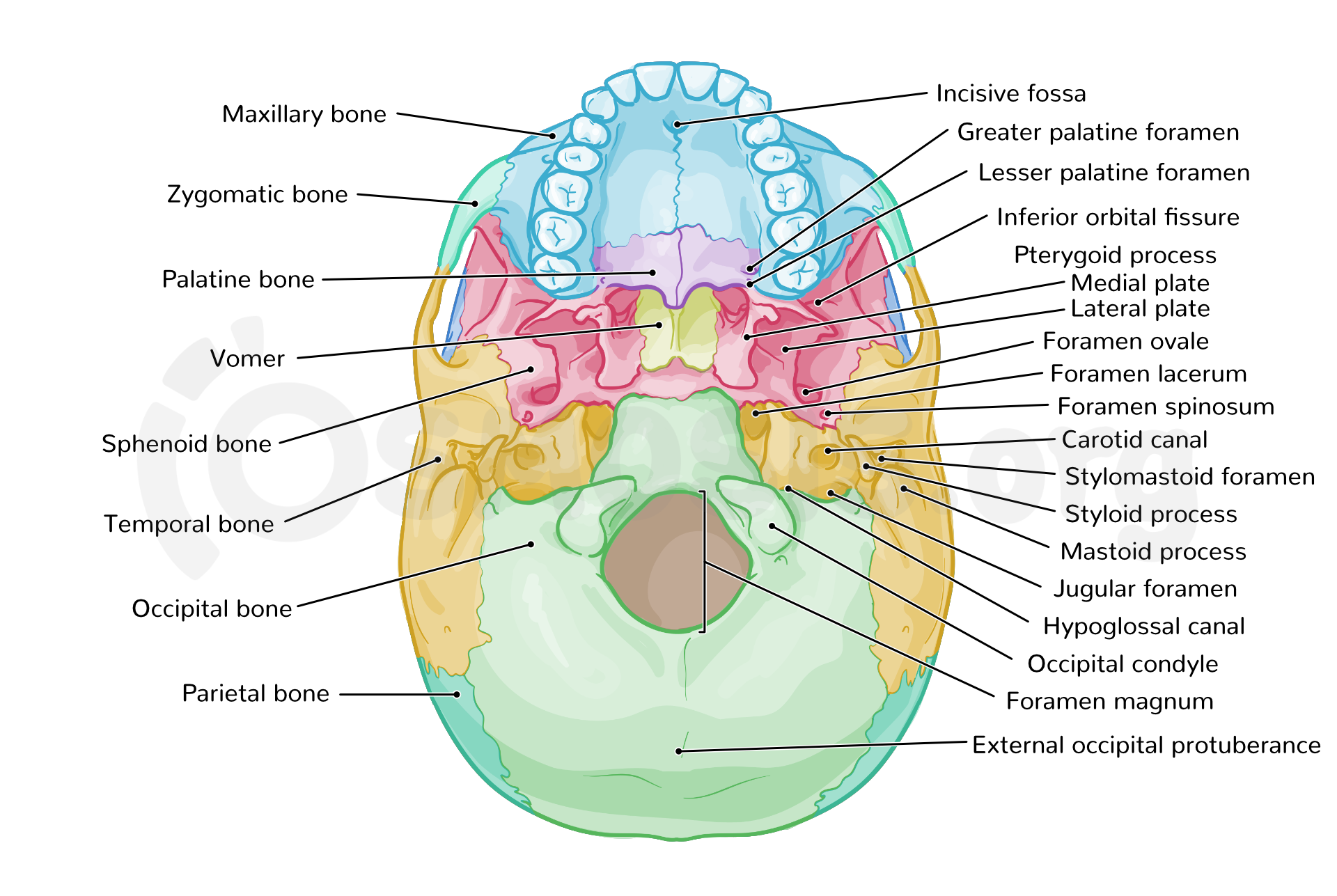 Figure 1: Anatomy of the cranial base, inferior view Figure 2: Anatomy of the hard palate and bony nasal septum, A. inferior view, and B. parasagittal view. 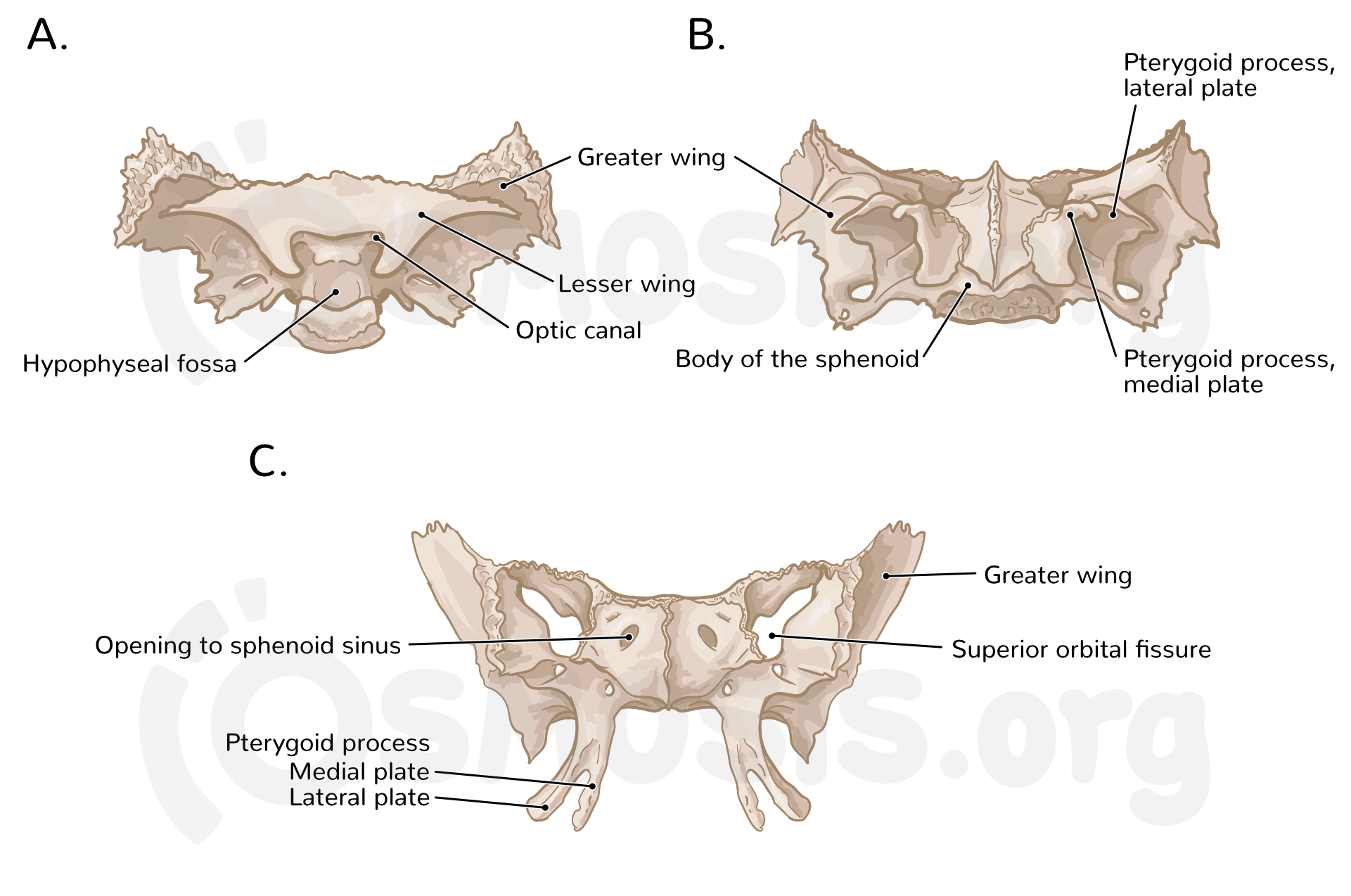 Figure 3: Anatomy of the sphenoid bone, A. superior, B. inferior, and C. anterior views. Figure 4: Interior of the cranial base, superior view 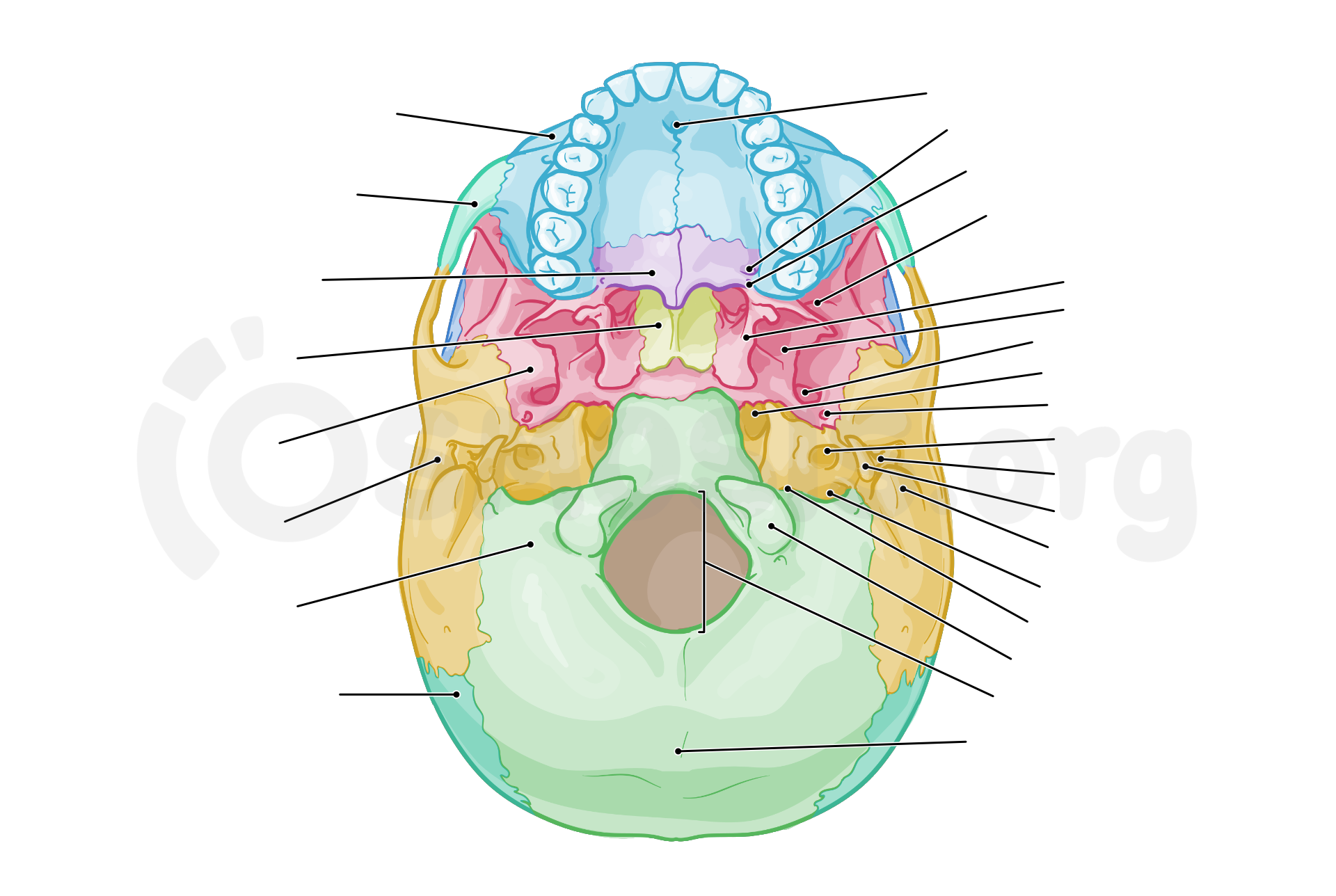 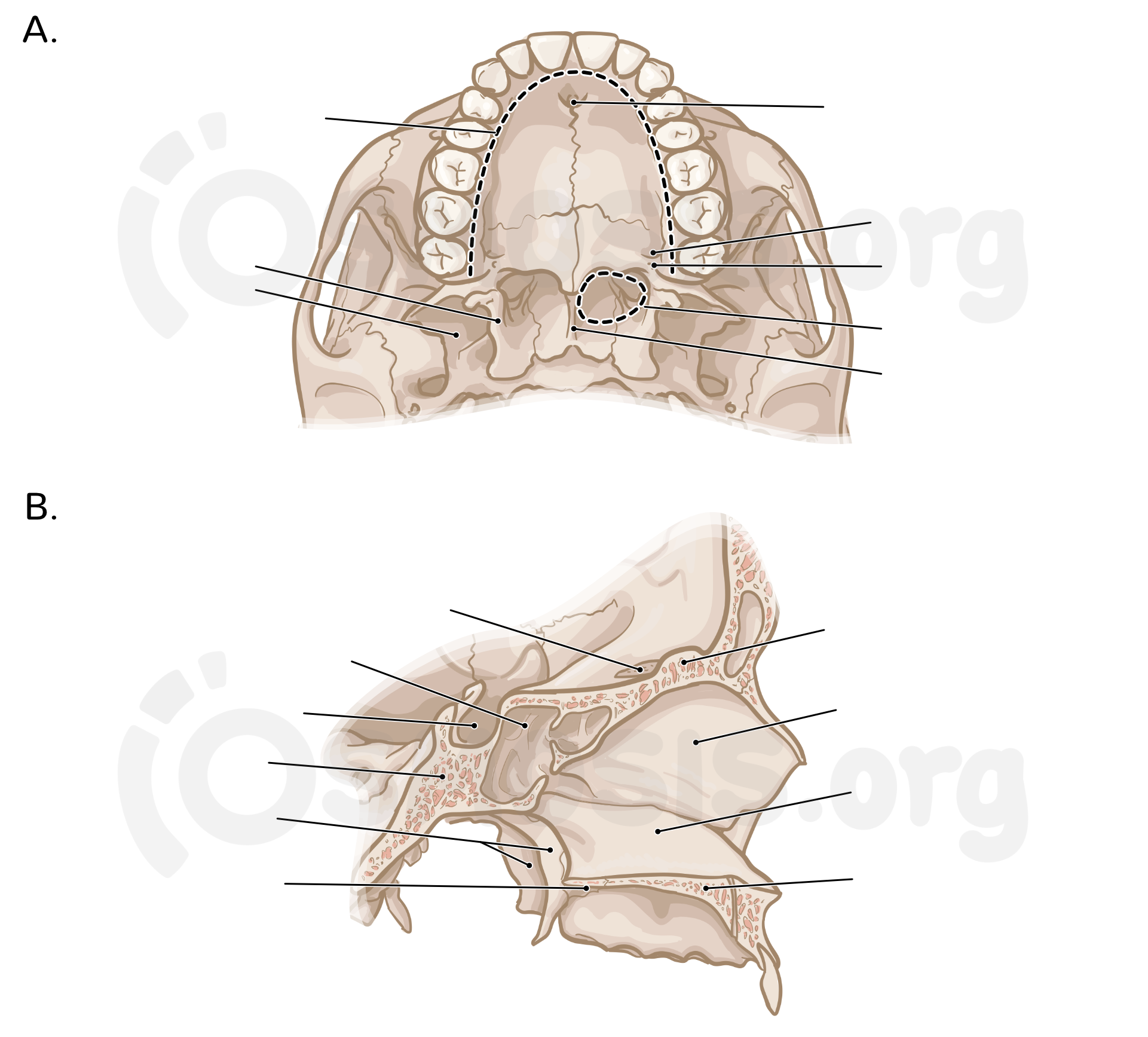 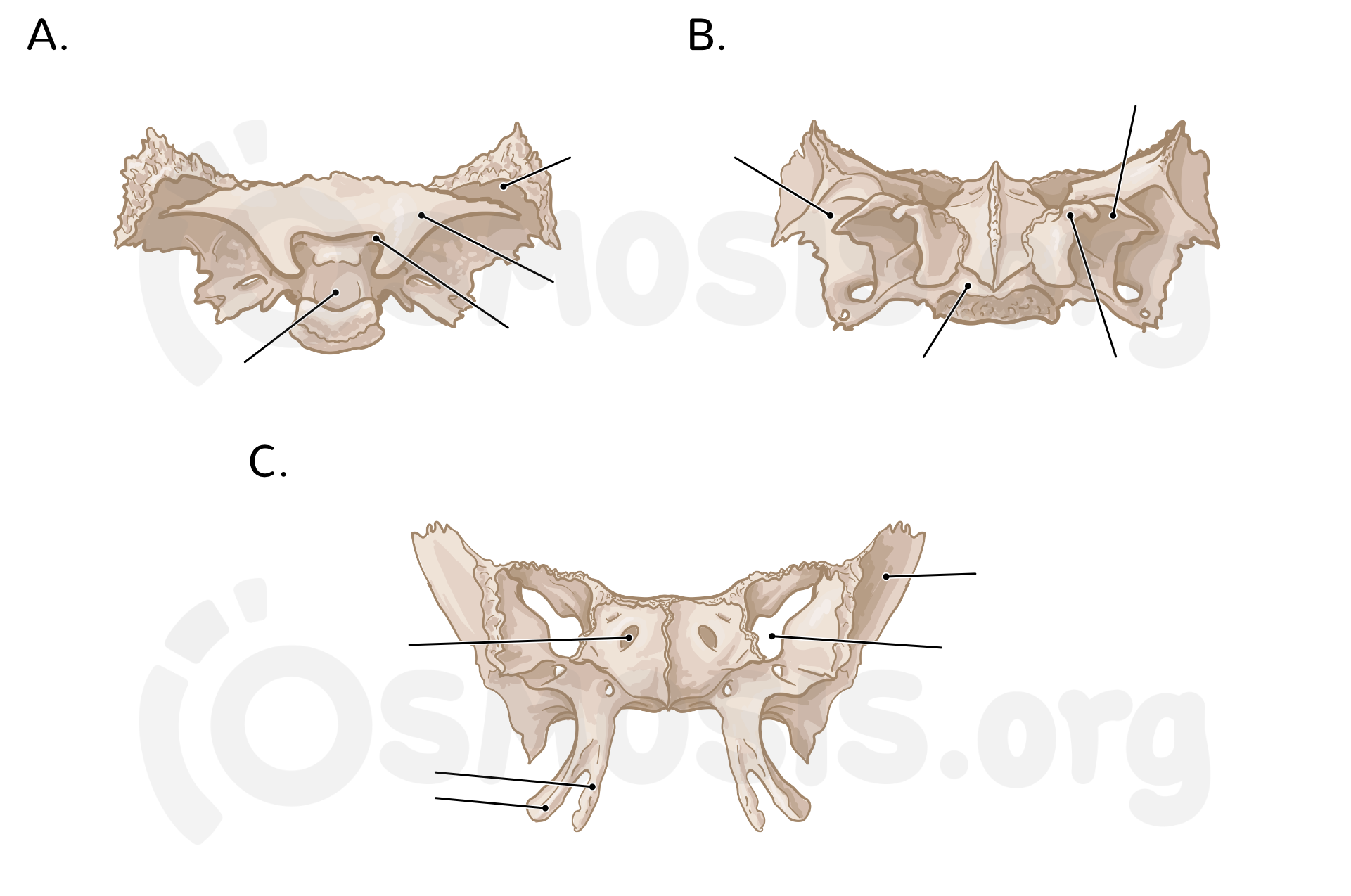 A 39-year-old man is involved in a motor vehicle collision. A CT scan of the head is performed and reveals the following:

The vessel that is most likely ruptured in this patient enters the skull via which of the following structures?

The cranial base is the most inferior part of the skull.

It consists of the floor of the cranial cavity plus the inferior aspect of the viscerocranium, minus the mandible.

Together with the cranial vault, which is the part of the skull that protects the brain, it contributes to the neurocranium.

Now, the cranial base is a highly irregular surface from both an external and internal view.

So let’s begin with the external surface of the cranial base, which is formed by the maxillary, palatine, vomer, sphenoid, and occipital bones, in the midline; and the zygomatic and temporal bones laterally.

In the most anterior part of the cranial base, there are the alveolar arch and the hard palate.

The hard palate makes up both the roof of the mouth and the floor of the nasal cavity, and it’s made up of the palatine processes of both maxil lary bones and the horizontal plates of both palatine bones behind them.

The maxillary teeth border the hard palate anteriorly and on both sides.

Right behind the incisor teeth there’s the incisive fossa, which has one or more incisive foramina, that allow the nasopalatine nerves and the terminal branches of the sphenopalatine arteries to pass through.

Now, superior to the posterior end of the hard palate are the posterior nasal apertures - or choanae - which are also bounded by the body of the sphenoid bones superiorly, the medial pterygoid plates laterally, and the vomer medially.

The choanae allow air to pass from the nasal cavities into the pharynx.

Speaking of which, the vomer is unpaired and located in the midline.

It's flat and thin, and forms the nasal septum together with the ethmoid bone, to which the vomer articulates superiorly.

Now let’s move on to the middle part of the cranial base.

In this part we can see right behind the hard palate: the vomer in the midline; and the sphenoid bone laterally.

The sphenoid bone is an unpaired bone that has three pairs of processes: the greater wings and the lesser wings which spread laterally and form the lateral aspect of the body, and a third pair of pterygoid processes which possess a medial and lateral plate, and extend inferiorly.

Now, behind the vomer and sphenoid bones are the occipital and temporal bones.

Laterally, there are the occipital condyles, which articulate with the first cervical vertebra - or atlas - through a mobile joint that allows us to move our head forward, backward, and laterally.

n regards to the temporal bone, within the petrous part,there’s the carotid canal, through which the internal carotid artery passes.

Behind the carotid canal, there’s the jugular foramen, formed by the petrous part of the temporal bone anteriorly, and the occipital bone posteriorly; it is famous for allowing the passage of the cranial nerves IX, X, and XI, and where the internal jugular vein emerges from the cranium as the continuation of the sigmoid sinus.

Lateral to the jugular foramen is the styloid process and the mastoid process.

Between the styloid and the mastoid processes, there’s the stylomastoid foramen through which the facial nerve and stylomastoid artery pass.