Assessments
Anatomy of the cranial meninges and dural venous sinuses

Anatomy of the cranial meninges and dural venous sinuses 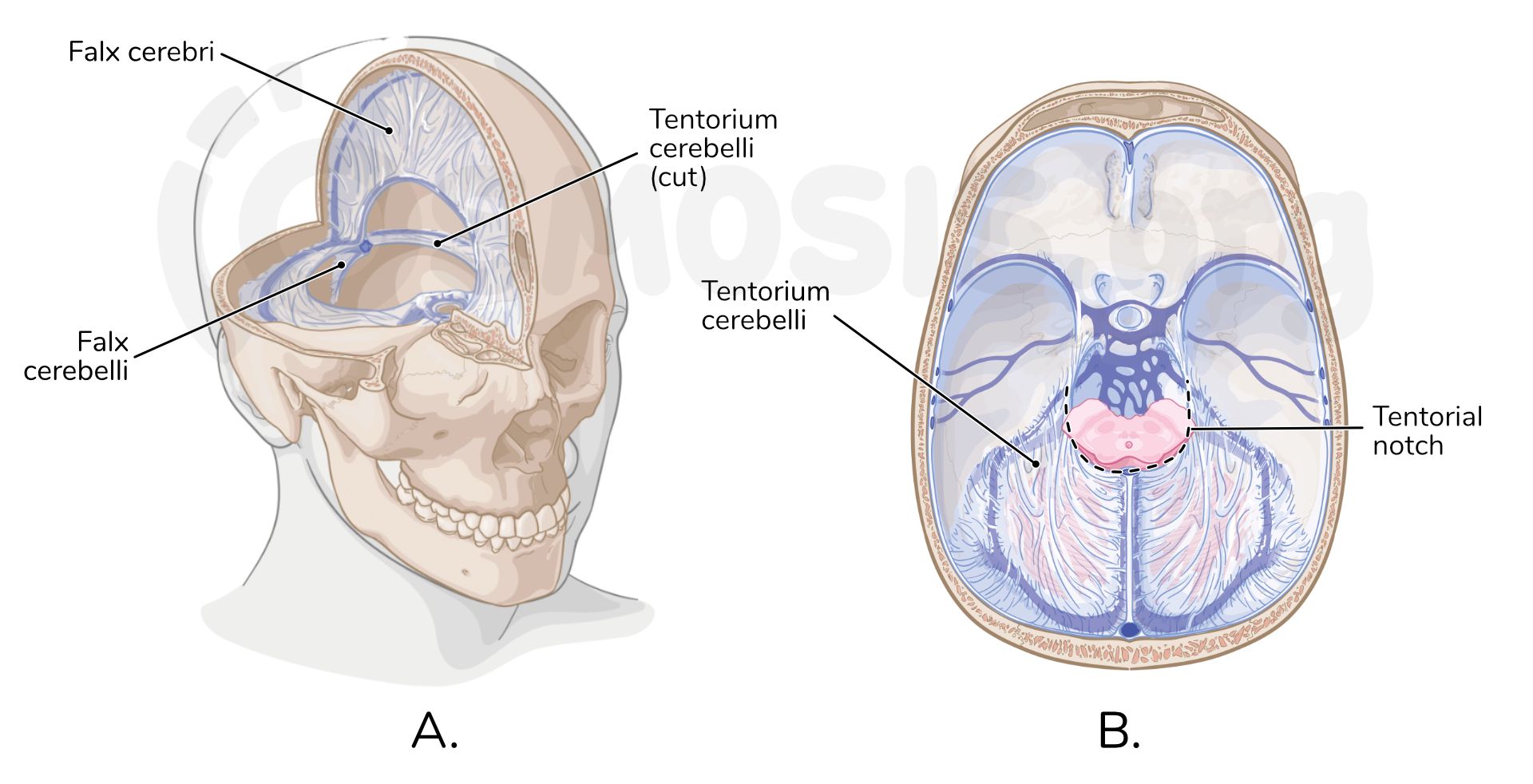 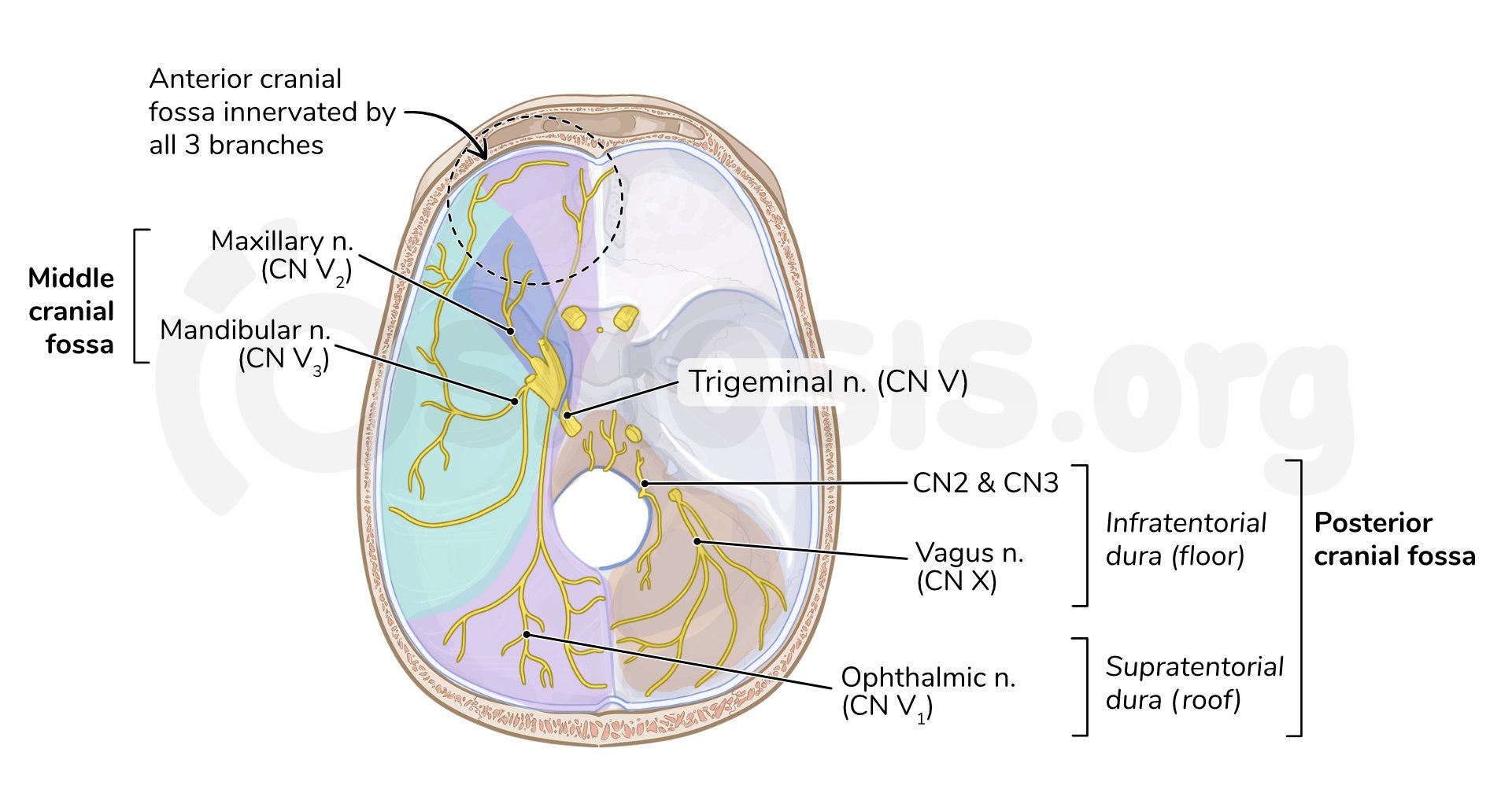 Figure 7: Innervation of the dura mater. 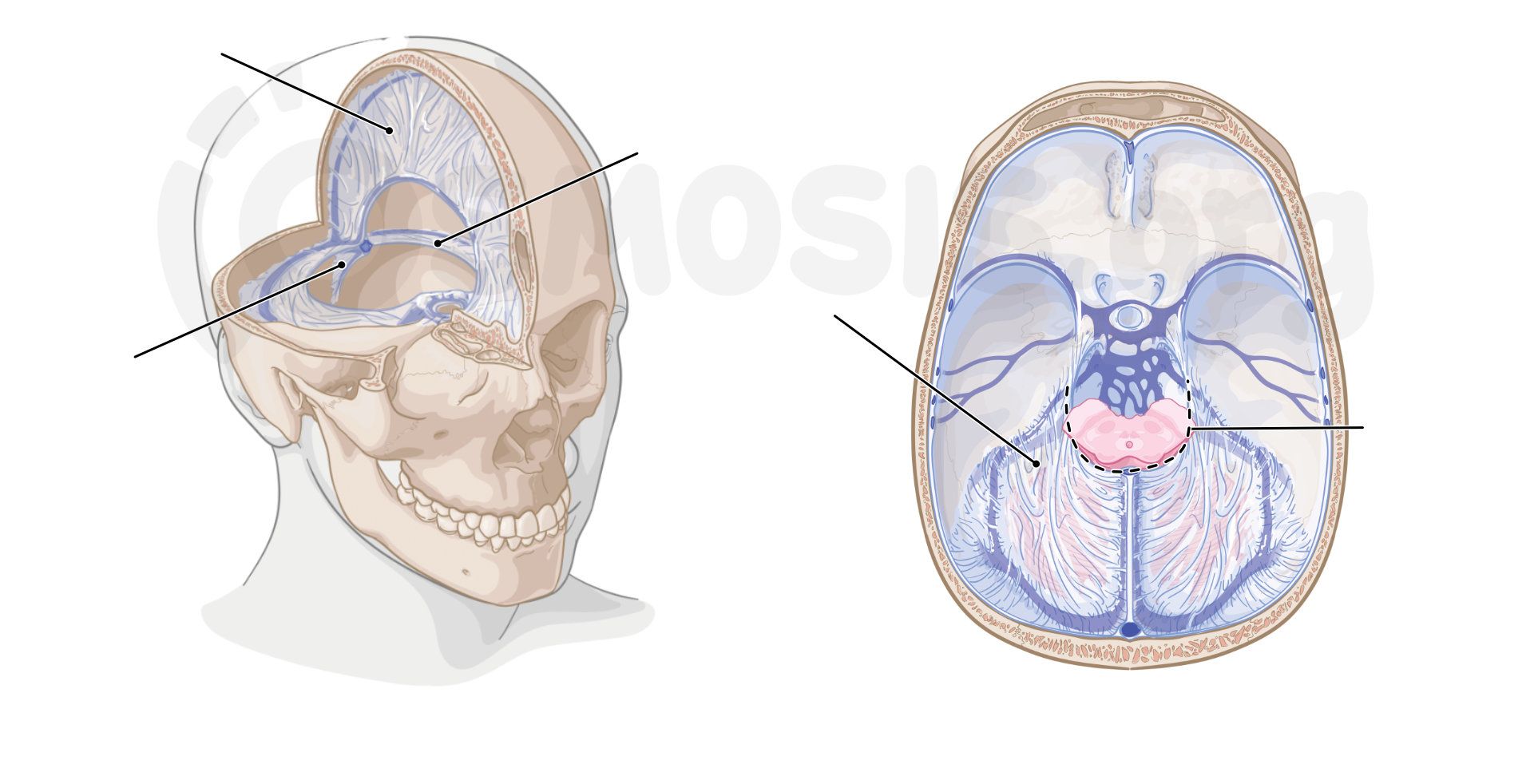 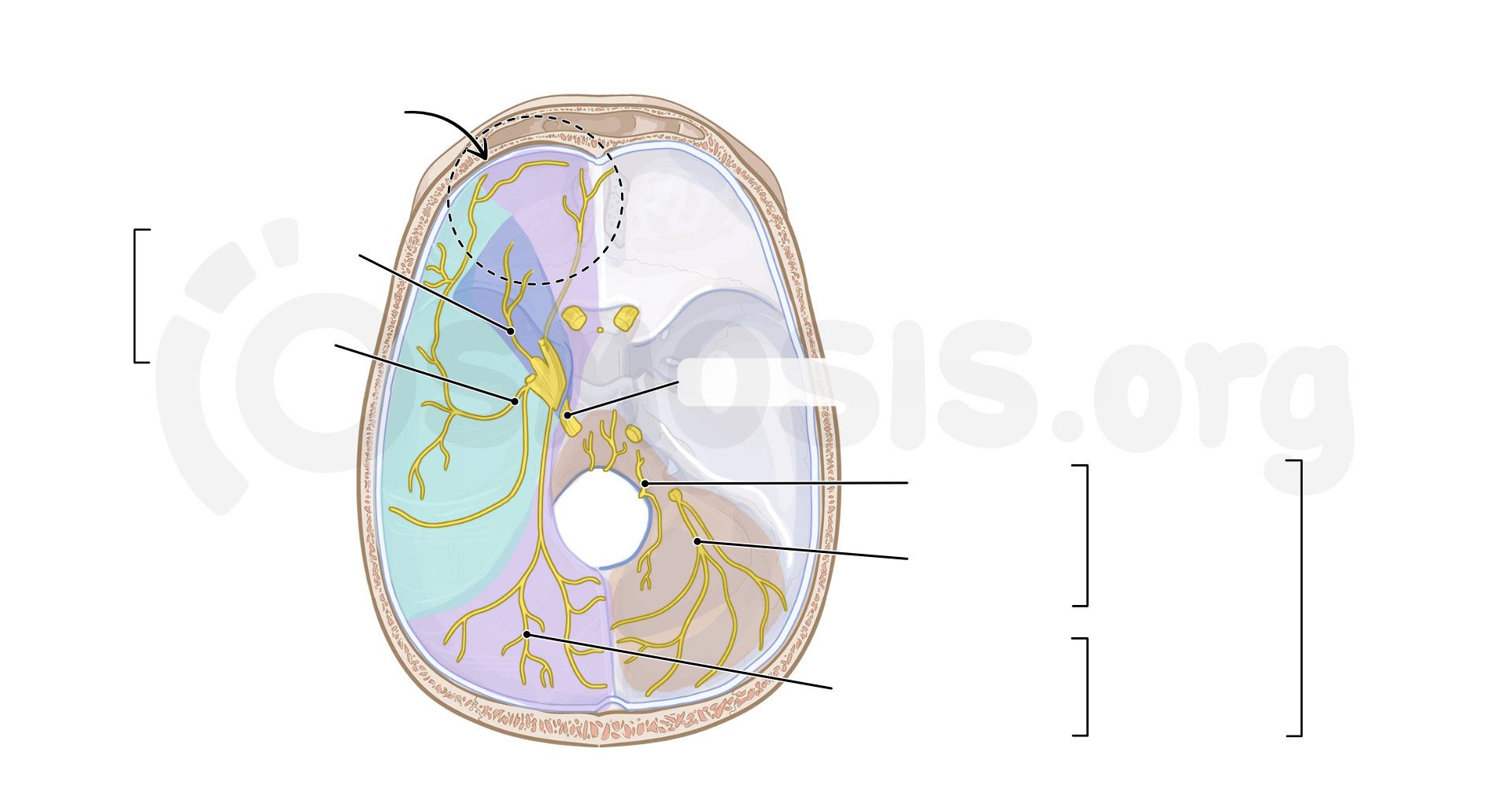 A 37-year-old man presents to the emergency department for evaluation of excruciating headaches. The headaches began three days ago and have progressively worsened. Temperature is 37.9°C (100.2°F), blood pressure is 152/90 mmHg, and pulse is 97/min. On physical examination, the headache is worsened with the Valsalva maneuver. No signs of trauma are present over the skull. CT imaging is obtained and reveals thrombosis within the portion of the superior sagittal sinus overlying the occipital lobe. The affected area of the dural venous system is primarily innervated by which of the following nerves?

Just think of this as the brain needing three layers of blankets when going to bed at night to make sure it is extra cozy and secure! These three layers, from superficial to deep, are the dura mater, arachnoid mater, and pia mater.

Deep to the arachnoid mater is the pia mater. The pia mater is a delicate vascular layer that is intimately adhered to the brain, covering the gyri and extending along the different sulci and fissures.

Okay, let's dive in and take a closer look at the dura mater, which is the thickest, outermost meningeal layer. The dura mater itself is further divided into two layers. The first, more superficial layer is called the endosteal layer, or periosteal layer of the dura mater. It is located on the interior surface of the skull bones and ends at the foramen magnum.

The endosteal layer does not continue with the dura mater of the spinal cord, but instead becomes continuous with the periosteum on the external aspect of the skull bones. Between the endosteal layer of the dura mater and the skull bones, there lies a potential space called the extradural, or epidural space, which is not a natural space, but may become a pathological space during bleeding.

The second, deeper layer of the dura mater is the inner meningeal layer, which is continuous with the dura mater of the spinal cord and ends at the level of the S2 vertebra. For the most part, these two dural layers are fused together and cannot be separated, but there are two main exceptions to this.

One, there are locations where spaces are created between the layers to house the dural venous sinuses. Secondly, the inner meningeal layer of the dura mater reflects away from the endosteal layer at certain regions to create dural infoldings, or reflections, which divide the cranial cavity into compartments.

It attaches anteriorly to the frontal crest of the frontal bone and the crista galli of the ethmoid bone. It contains the superior sagittal sinus in its fixed superior margin and attaches posteriorly to the internal occipital protuberance, where it also blends with the upper surface of the tentorium cerebelli.

Speaking of the tentorium cerebelli, this crescent shaped reflection is the second largest dural infolding, with a fixed margin posterolaterally and a free margin more anteriorly. The fixed margin is attached at three sites; bilaterally at the posterior clinoid processes, to the superior parts of the petrous portion of the temporal bone, and to the grooves of the transverse sinus on the inner surface of the occipital bone.

In contrast, the anterior part of the tentorium cerebelli is connected to the clinoid process of the sphenoid bone at its most rostral end. Otherwise, its margins are free, forming a U-shaped space.

Now, inferior to the tentorium cerebelli, we will find the falx cerebelli. This small dural infolding attaches to the internal occipital crest and contains the occipital sinus in its fixed posterior margin. It extends in the sagittal plane and partially separates the cerebellum into two cerebellar hemispheres.

Now, as we said before, the two layers of the dura mater, for the most part, are strictly fused together. However, there are areas between the endosteal and meningeal layers that form spaces to accommodate the dural venous sinuses.

Keep in mind that the confluence of sinuses is also the point where the straight and occipital sinuses merge with the superior sagittal sinus. It then deviates to one side, usually the right, to connect with the transverse sinus.

While doing so, these sinuses create impressions in the occipital and parietal bones. The transverse sinuses also receive blood from the superior petrosal sinuses. The two transverse sinuses eventually continue as the right and left sigmoid sinuses on each side.

The right and left sigmoid sinuses follow an S shaped course in the posterior cranial fossa. During their course, they turn anteriorly and continue inferiorly as the internal jugular veins, which travel through the jugular foramen.

Speaking of the occipital sinus, this sinus is located on the interior aspect of the occipital bone, along the caudal attached border of the falx cerebelli. It ends posterosuperiorly at the confluence of sinuses.