Assessments
Anatomy of the gastrointestinal organs of the pelvis and perineum

GI Organs of the Pelvis 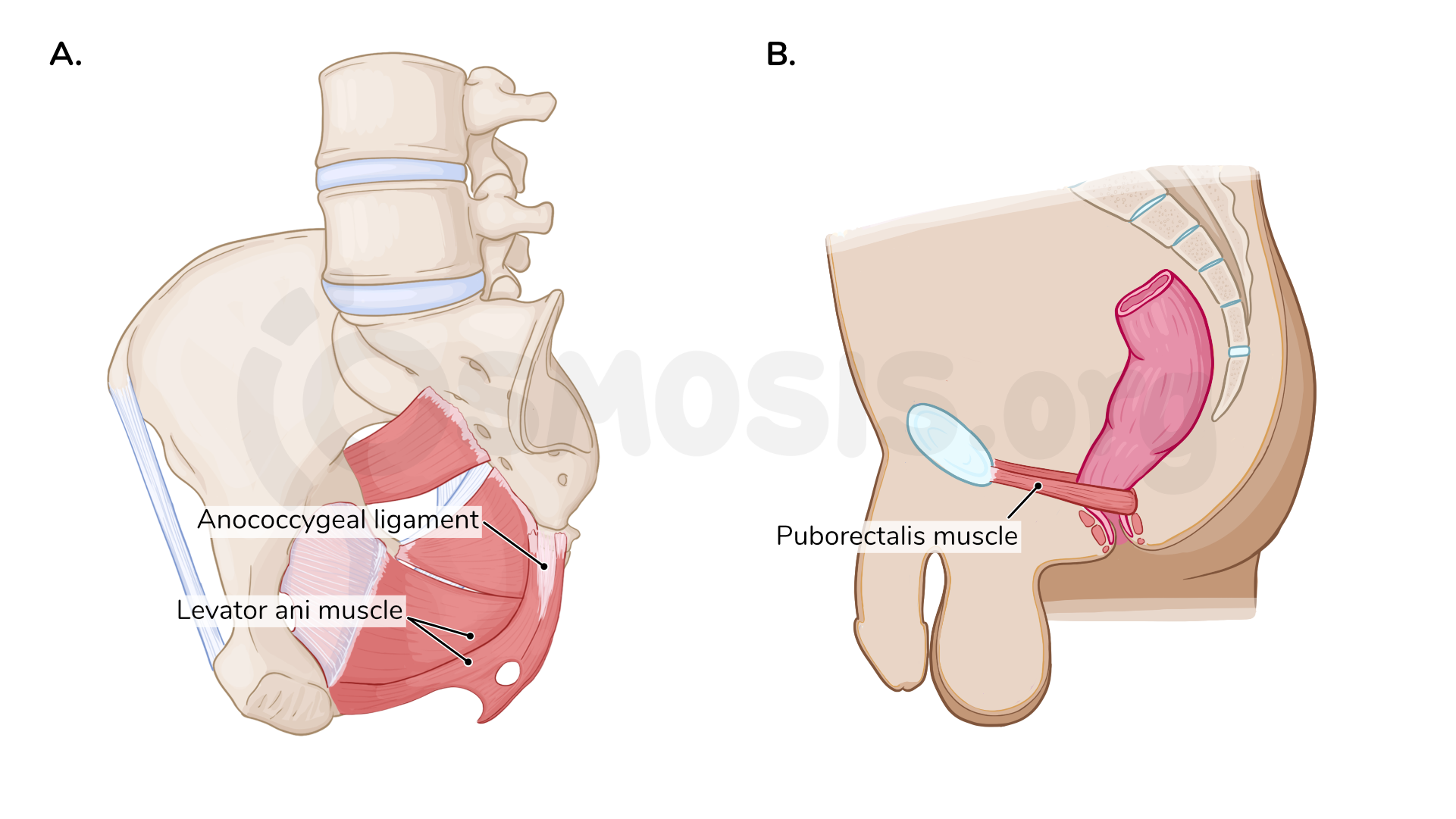 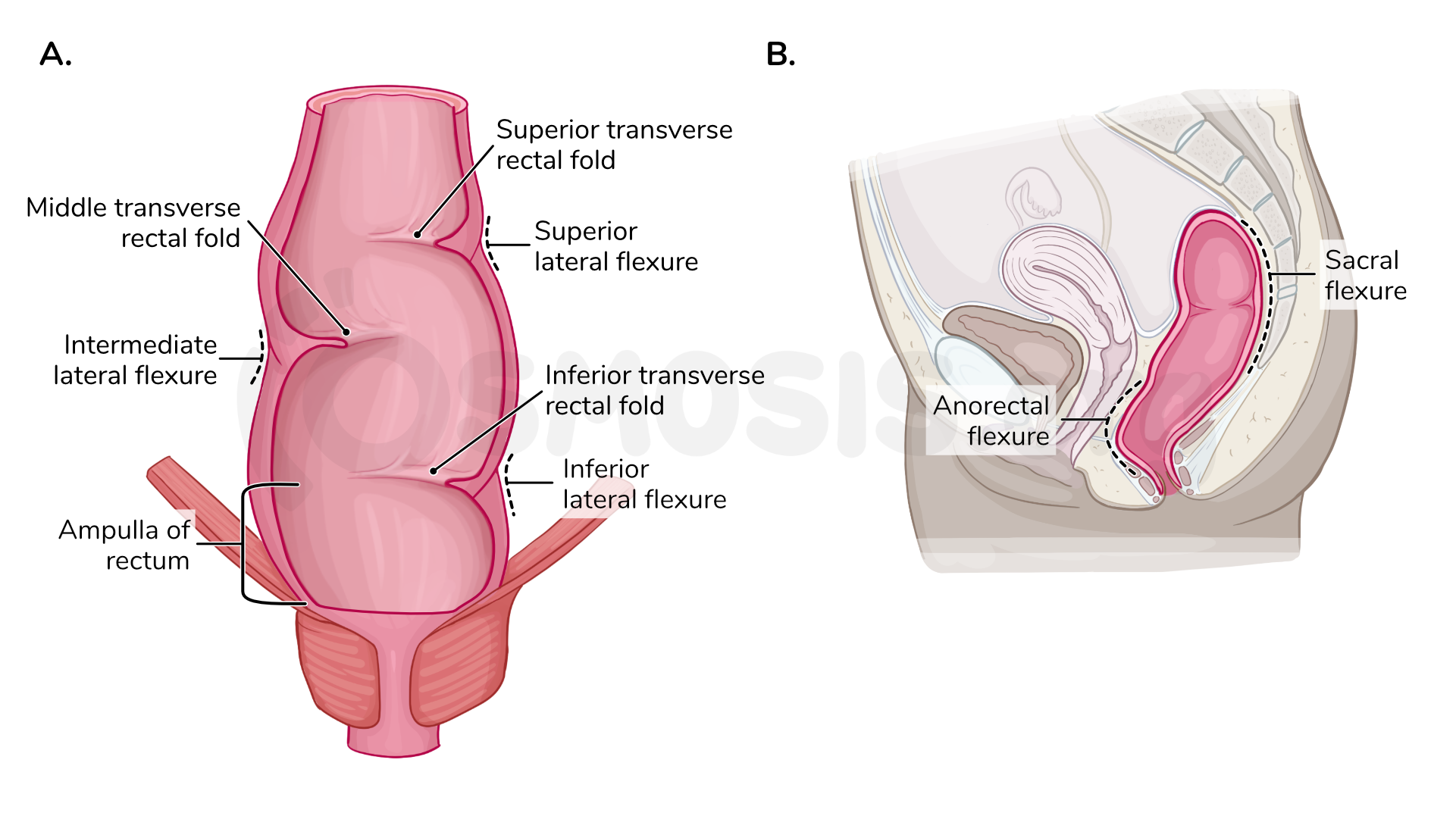 Figure 2. A Anterior view of the rectum in coronal section with the anterior wall removed. B Midsagittal section of a female pelvis. Figure 4. Anterior view of the rectum showing the A arterial supply and B venous drainage. 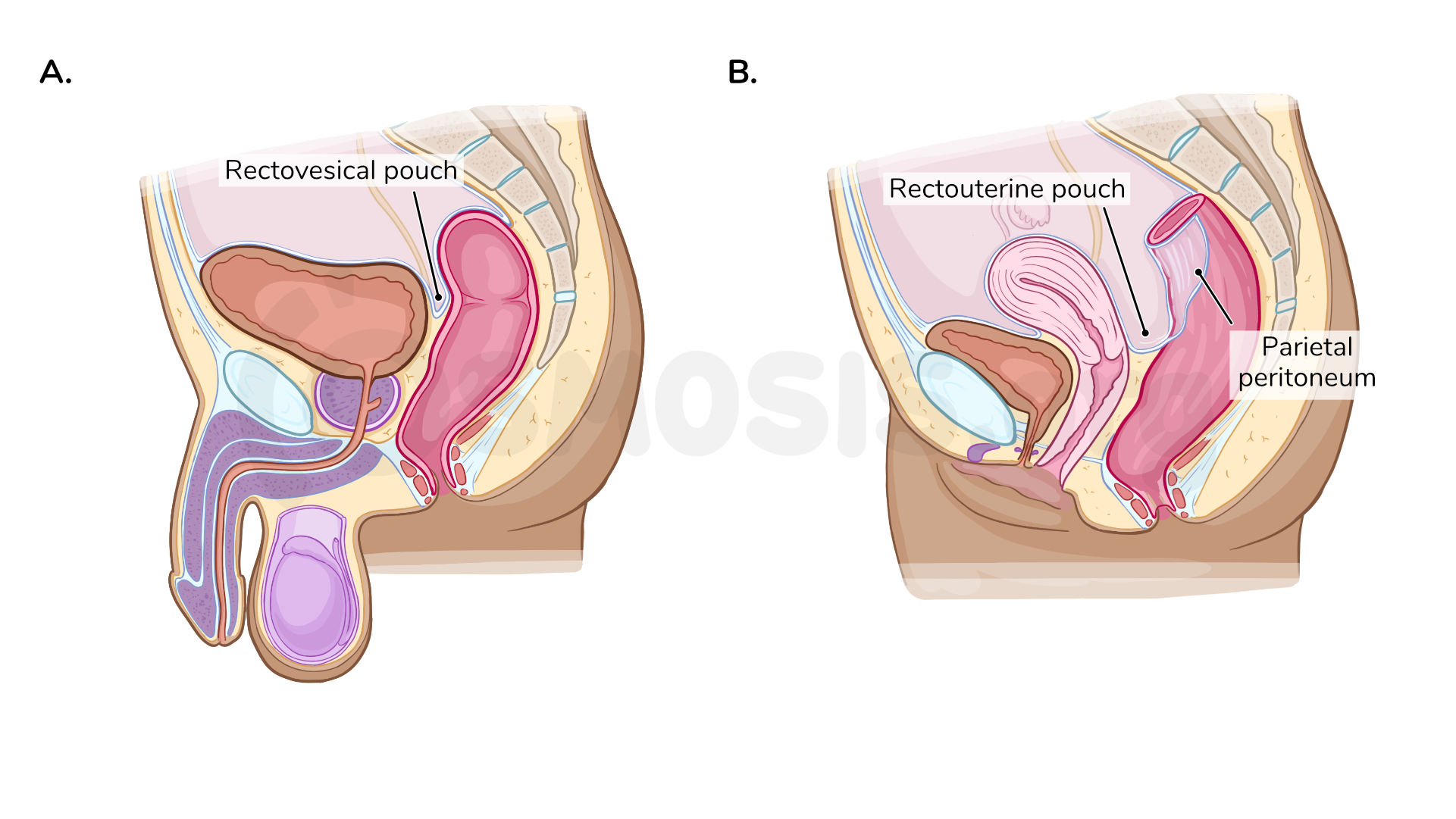 Figure 5. Midsagittal view of the A male and B female pelvis (with rectum intact). 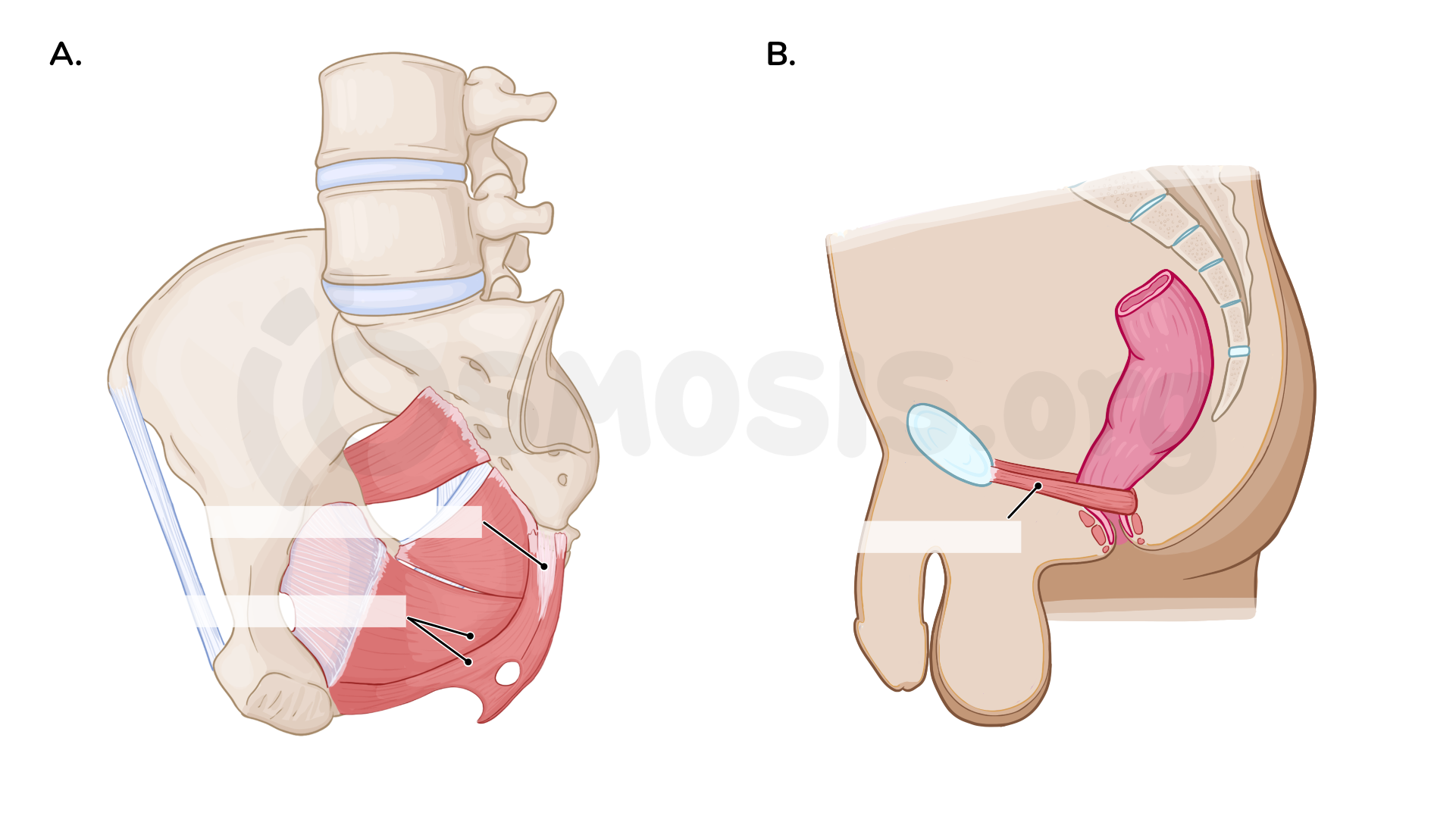 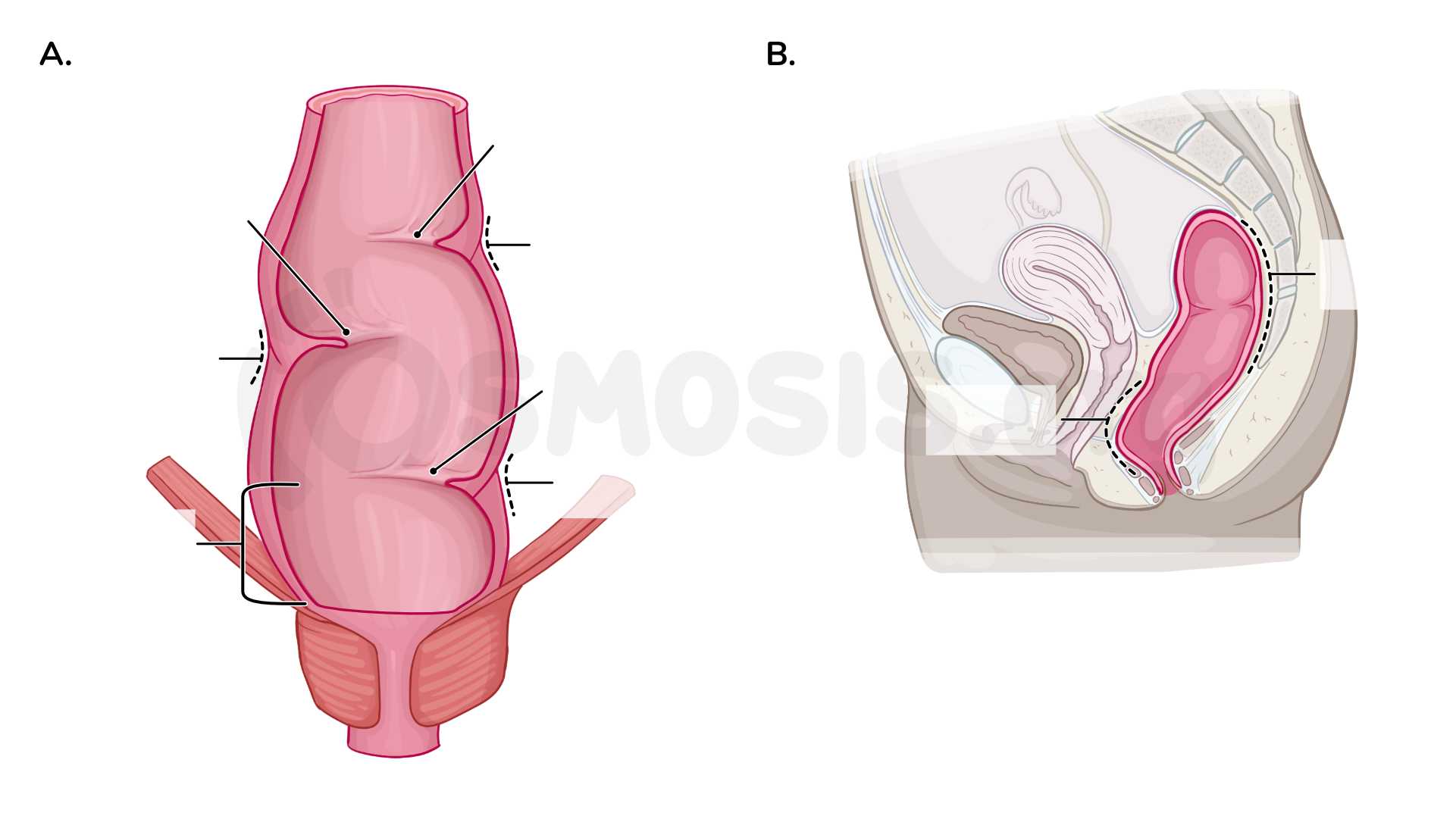 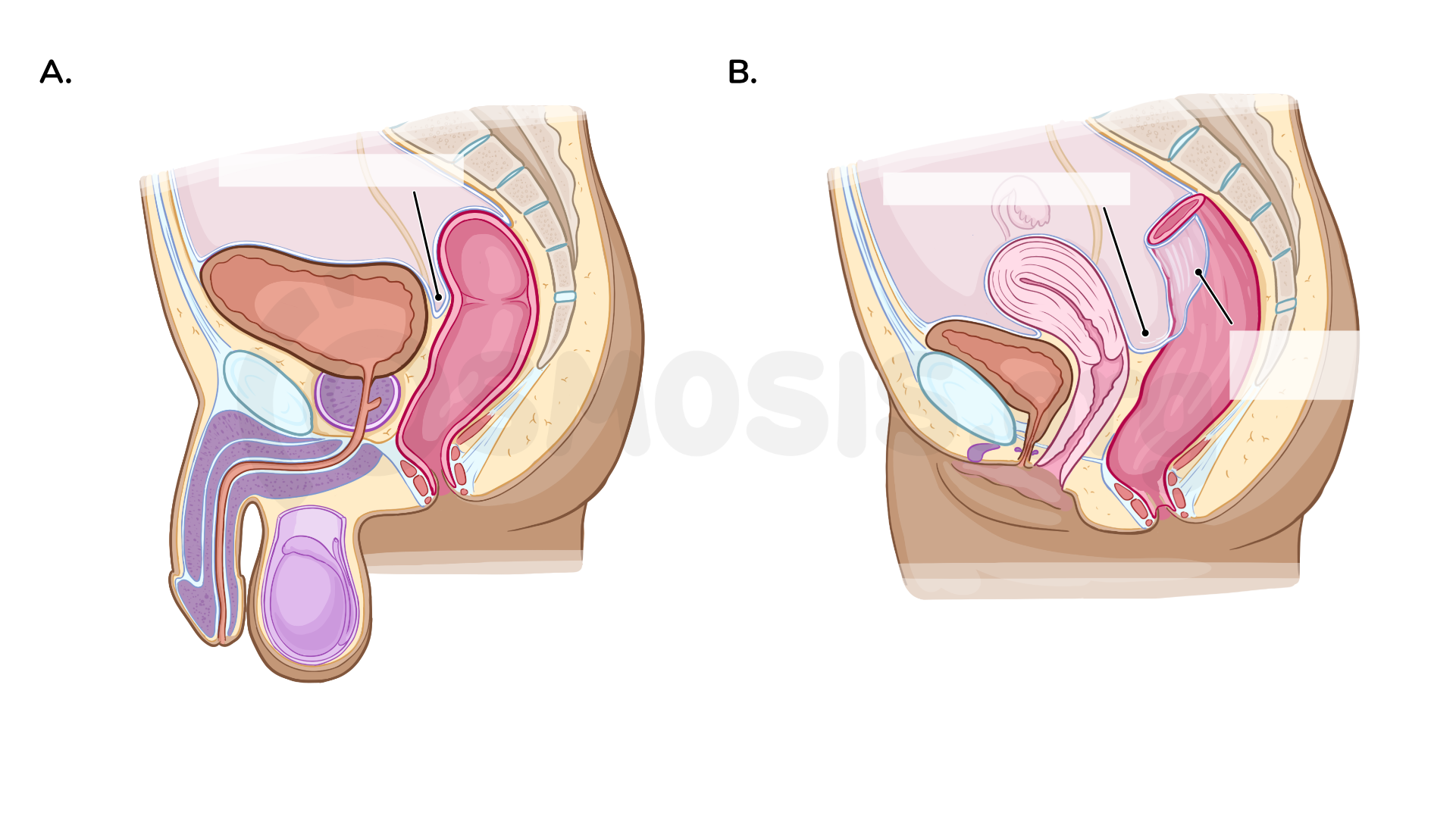 The rectum is the terminal chamber of the large intestine that temporarily stores feces before defecation. The rectum joins with the sigmoid colon at the level of S3, forming the rectosigmoid junction.

Let’s think of the pelvis like a bowl. The levator ani muscle acts as the bottom of the bowl to support the structures within the pelvis, especially the rectum.

The relations of the rectum to the surrounding structures differs between biologically male and biologically female individuals.

The rectum is a Latin word that means straight, but this is a bit misleading, because the human rectum actually has many flexures.

These flexures include the sacral, the anorectal, and the superior, inferior, and intermediate lateral flexures. The sacral flexure follows the curve of the sacrum and the coccyx, forming an anteroposterior curve with an anterior concavity.

Next is the anorectal flexure, which is a sharp postero-inferior angle at the anorectal junction. This flexure is maintained by a sling-like muscle, puborectalis, which is part of the levator ani muscle group.

The ampulla of the rectum expands to store feces before defecation, which also helps maintain fecal continence.

Okay, now let’s look at the relationship between the rectum and the peritoneum. To do that, let’s slice the rectum into thirds. In the upper third, the peritoneum covers the anterior and lateral surfaces of the rectum.

The lateral extension of the peritoneum forms a fossa on each side of the rectum, called the pararectal fossa, which allows the rectum to expand when it fills with feces.

Then, the peritoneum continues to cover only the anterior surface of the middle third of the rectum. From here, the course of the peritoneum is a bit different in males and females.

In males, the peritoneum reflects from the middle third of the rectum to the posterior surface of the bladder, forming the rectovesical pouch.

In females, the peritoneum reflects from the middle third of the rectum to the posterior surface of the vagina and the uterus, forming the rectouterine pouch. In both males and females, the lower third is without peritoneal cover and is considered subperitoneal.

Next are the left and right middle rectal arteries, which arise from the anterior division of the internal iliac arteries to supply the middle and lower parts of the rectum.

The middle rectal vein drains blood from the ampulla of the rectum into the internal iliac veins, which are part of the systemic venous system.

These three sets of rectal veins all anastomose together within the walls of the rectum and anus, forming a connection between the portal and systemic systems. This type of special connection is called a portosystemic anastomosis.

Finally, the motor innervation of the rectum is supplied by the sympathetic and parasympathetic divisions of the autonomic nervous system.

Let’s start with the sympathetic fibers, which arise from the lumbar spinal cord, and pass through the lumbar splanchnic nerves and the superior and inferior hypogastric plexuses to reach the rectum.

Next are the parasympathetic fibers, which arise from S2 - S4 levels of the spinal cord, and pass through the pelvic splanchnic nerves and the inferior hypogastric plexus to reach the rectum.

Finally, the rectum lies below the pelvic pain line, meaning that visceral afferent fibers from the rectum follow the parasympathetic fibers to the S2 - S4 sensory ganglia.