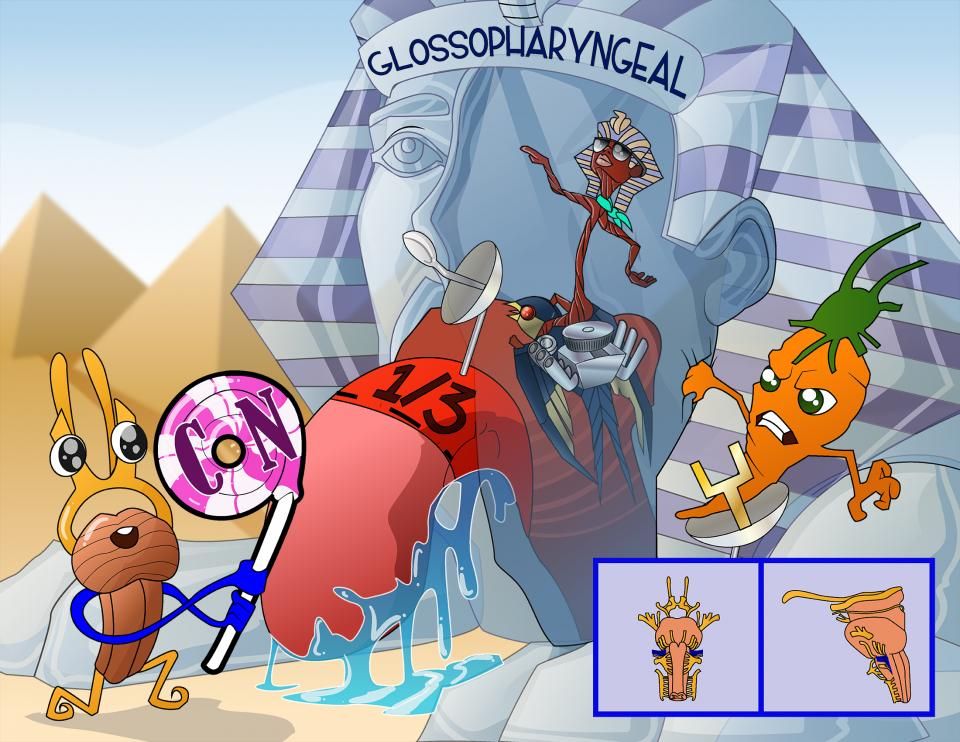 The glossopharyngeal nerve is the ninth cranial nerve and it has several roles. From helping us taste a freshly picked strawberry on the back of the tongue through its special sensory role, to keeping the carotid sinus in the loop about blood pressure variations through its visceral sensory component, as well as providing branchial motor innervation to a muscle in the pharynx and parasympathetic innervation to the parotid gland.

It may also receive somatic sensory information from a tiny part of skin on the external ear, but this isn’t important to remember. This nerve is working four - sometimes five - jobs, and doing them all really well!

Remember that the pharyngeal arches are 6 embryological structures, of which only 5 eventually develop into the muscles, arteries, bones and cartilage of the head and neck.

Now, the third pharyngeal arch is less complex than the first two arches and gives rise to only a few structures such as the common carotid artery, the proximal portion of the internal carotid artery, the lower body and the greater horn of the hyoid bone and the stylopharyngeus muscle.

All of these structures are innervated by the nerve of the third pharyngeal arch, which is the glossopharyngeal nerve.

So let’s take a closer look at the roles of this nerve. First up, there’s the special sensory component, that picks up taste information from the taste buds located in the posterior one-third of the tongue.

This pathway starts with special sensory fibers in the tongue, that travel via lingual branches of CN IX to the inferior glossopharyngeal, or petrosal, ganglion which contains the cell bodies of these first order neurons, in the jugular foramen.

Then, the fibers enter the cranial cavity and reach the brainstem at the level of the rostral medulla. From here, they travel in the solitary tract and synapse in the gustatory part of the nucleus of the solitary tract, on a second order neuron, to let us know that strawberry is, indeed, yummy!

Meanwhile, visceral and special sensory fibers typically travel to the inferior glossopharyngeal ganglion and synapse in the nucleus of the solitary tract.

Next, there’s the branchial motor component of the glossopharyngeal nerve, which innervates the stylopharyngeus muscle.

This is a muscle in the pharynx that elevates it during swallowing and speaking. The branchial motor pathway starts from the motor cortex and its axons travel to the nucleus ambiguus located in the medulla, containing cell bodies of the lower motor neurons.