Assessments
Anatomy of the larynx and trachea 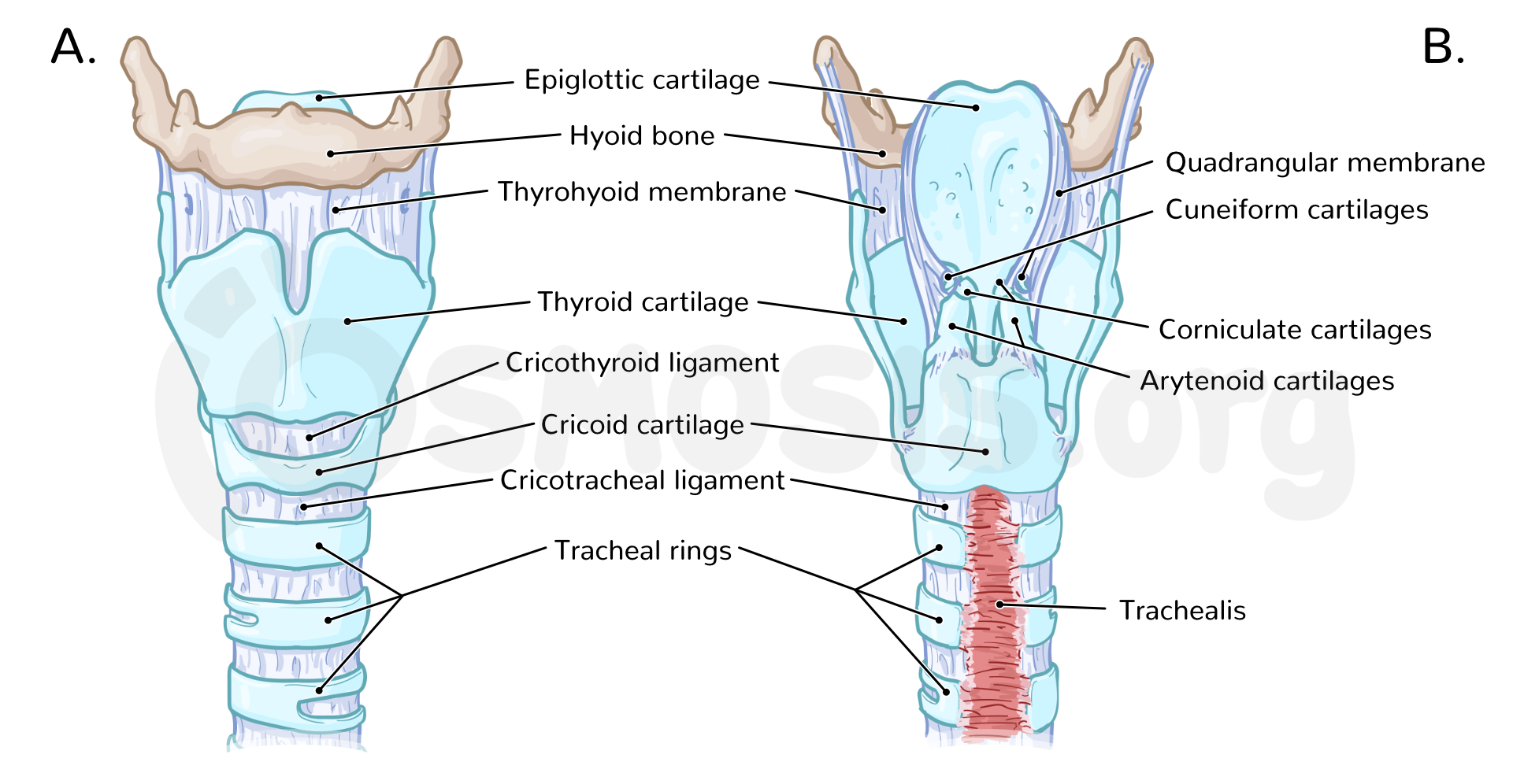 Figure 1: Cartilaginous skeleton of the Larynx and Trachea A. anterior view and B. posterior view.

Figure 2: Cartilaginous skeleton of the Larynx and Trachea A. lateral view and B. with hemisected thyroid cartilage. 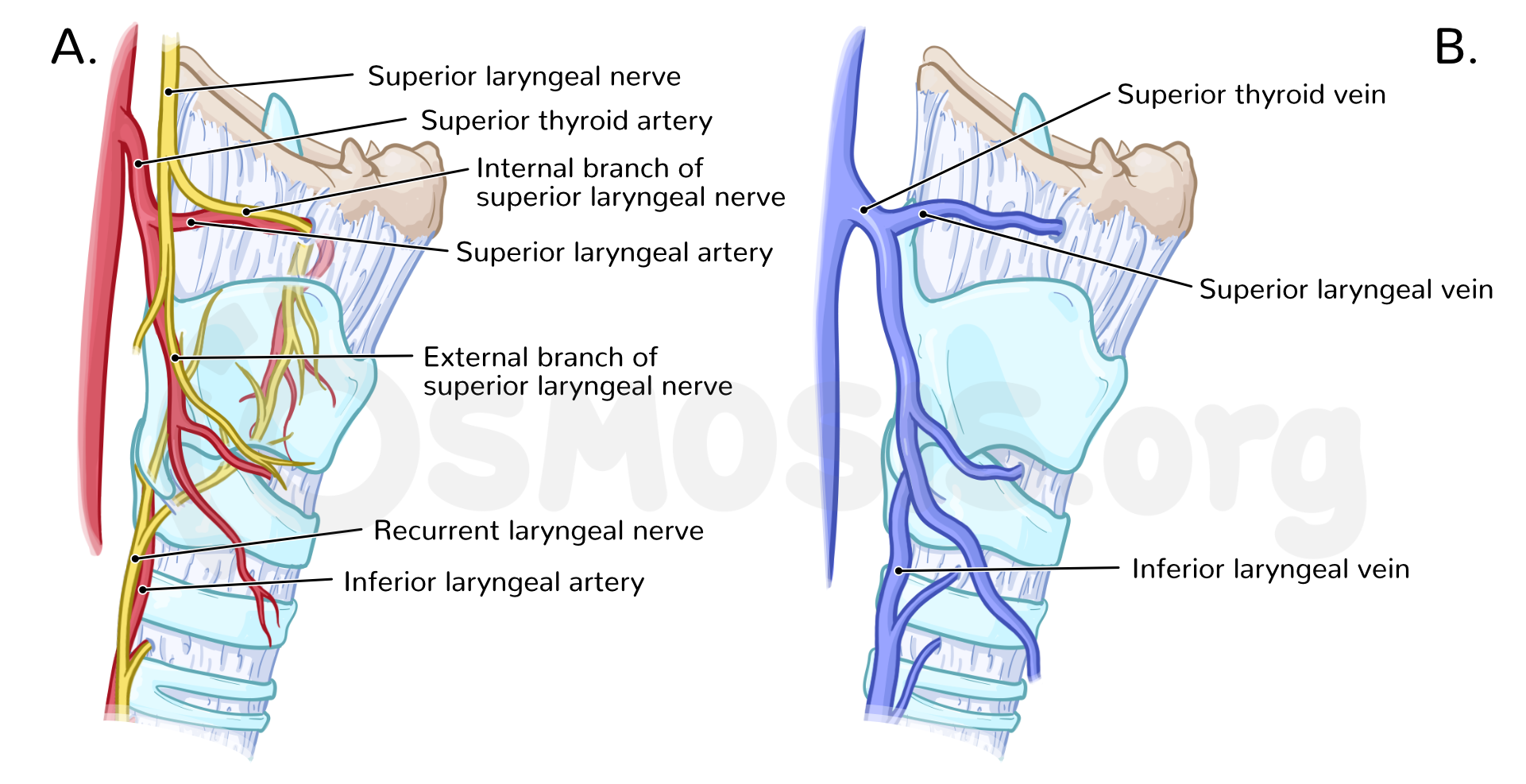 Figure 3: Neurovasculature of the Larynx and trachea A. Arteries and nerves and B. veins. 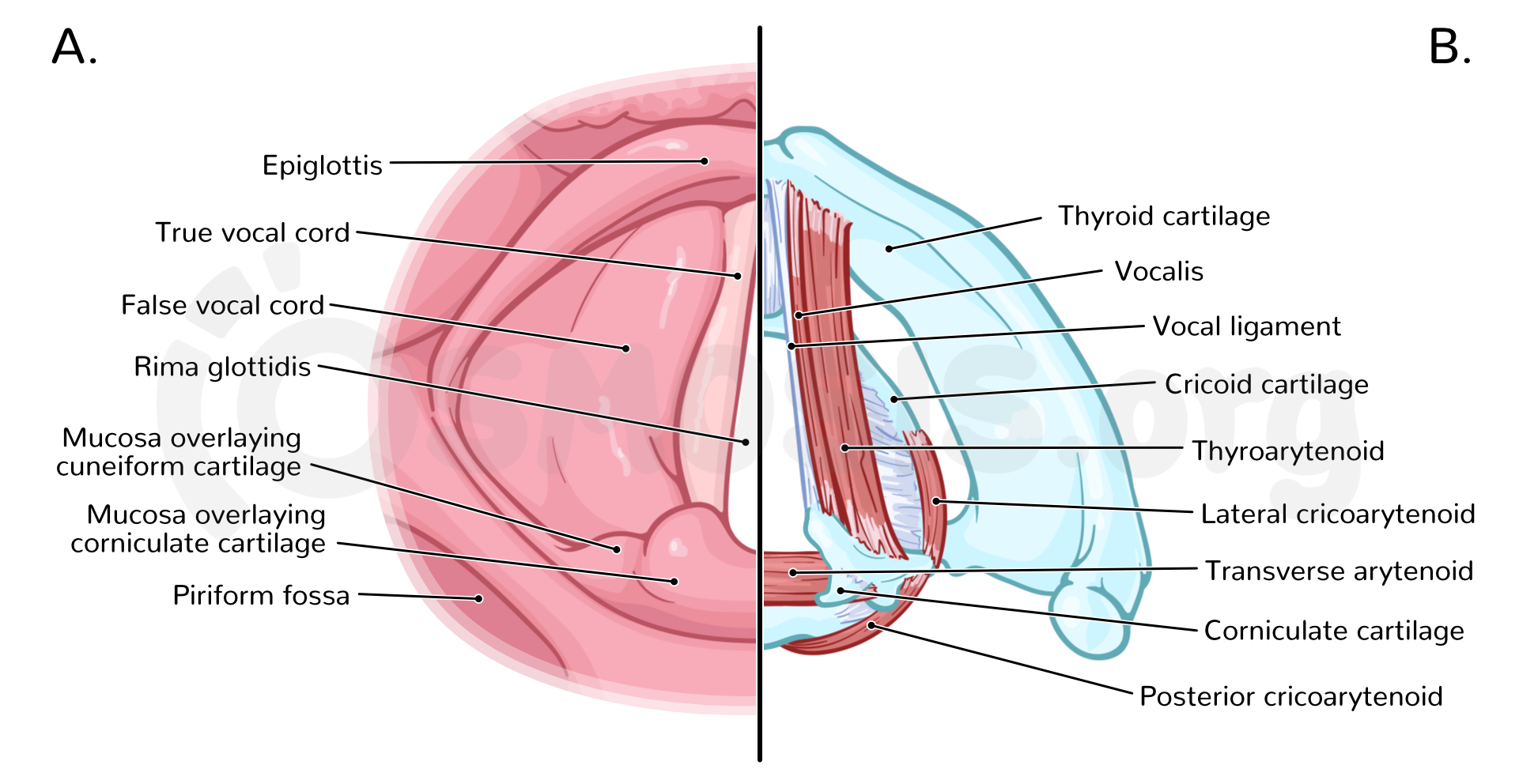 Figure 5: Anatomy of the vocal Ligaments, superior view A. superficial and B. deep. 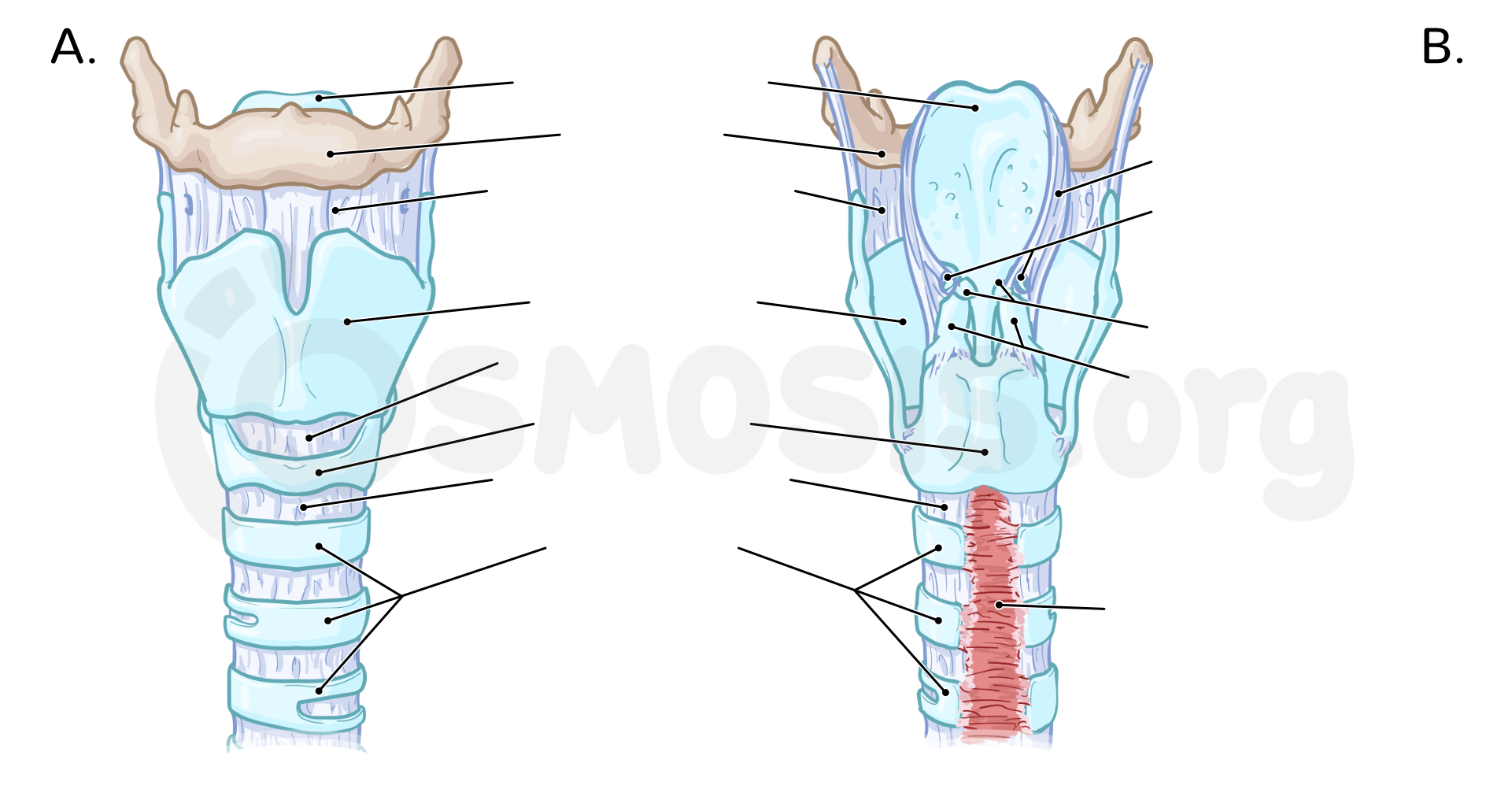 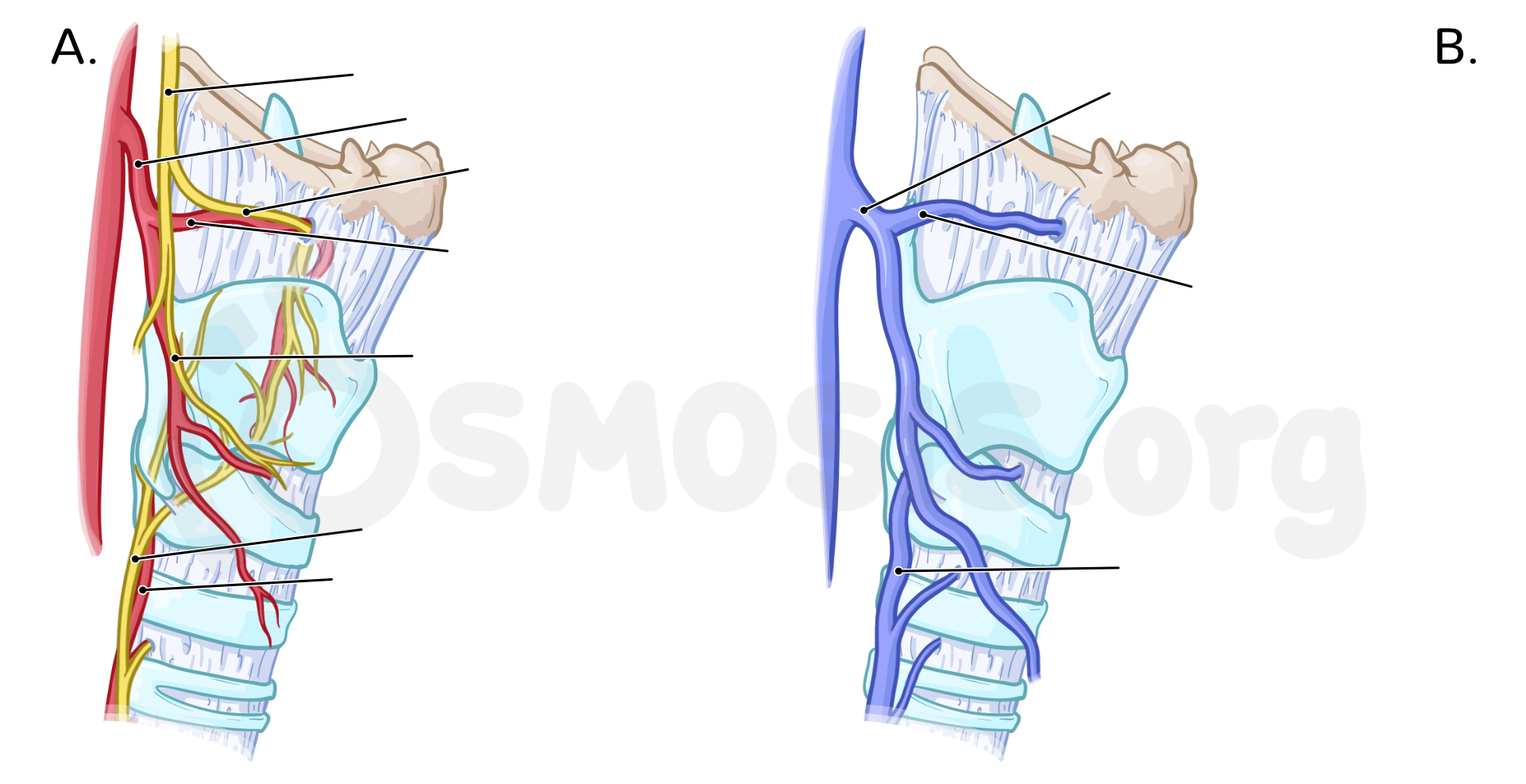 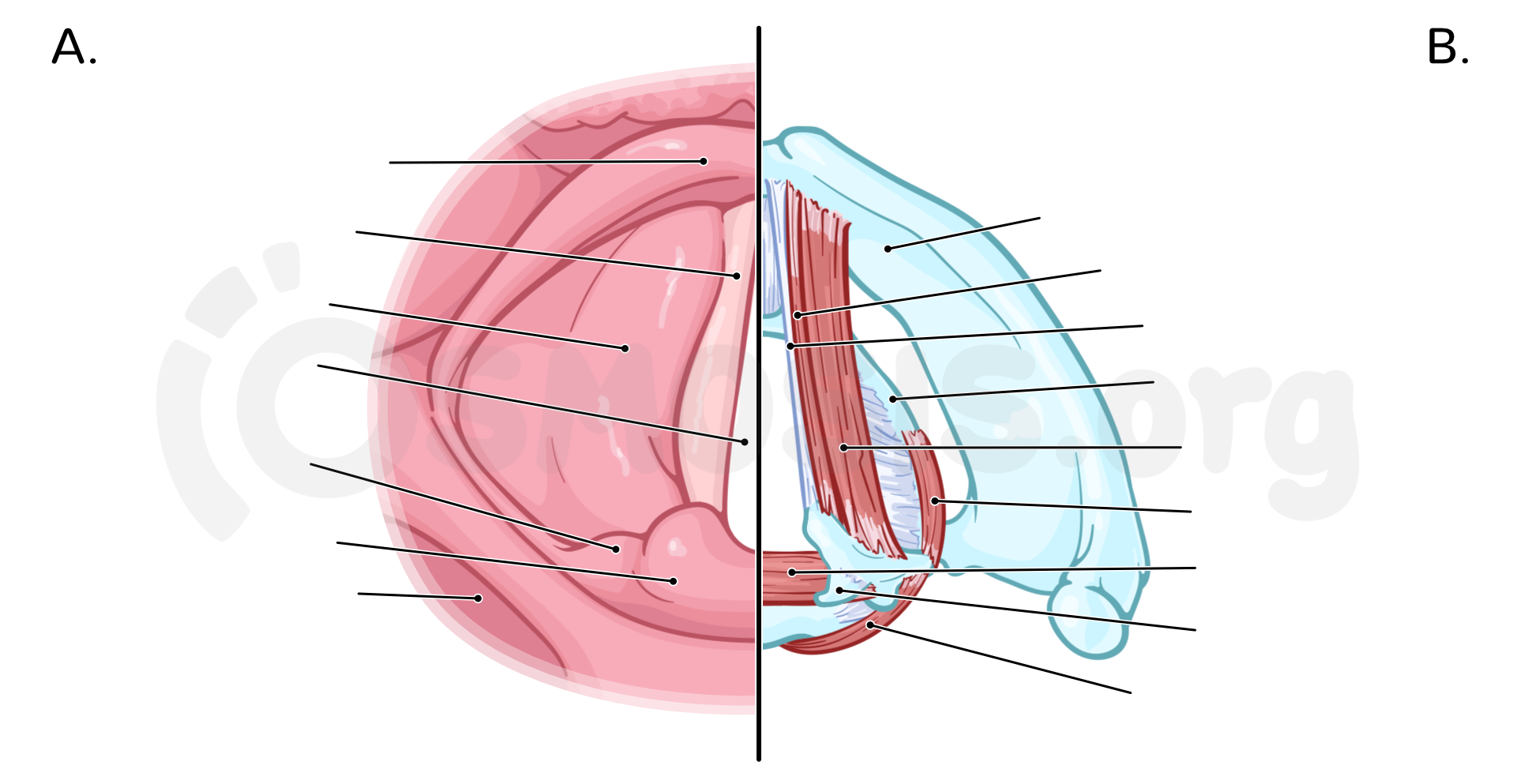 The vestibular fold is indicated in the image below.

Focusing on the respiratory layer of the cervical viscera, this contains the larynx and trachea that routes air to the lungs, and gives everyone their own unique voice and saying that just made me aware of my own voice on this video recording!

So, let’s start with the larynx which is responsible for voice production and maintaining a patent airway.

The larynx is located in the anterior neck at the level of the bodies of the C3 to C6 vertebrae and connects the inferior part of the pharynx with the trachea. It also contains the vocal cords, or vocal folds, so it’s responsible for voice production.

The thyroid cartilage is the largest cartilage and its superior border lies opposite the C4 vertebra.

It’s formed by two plate-like laminae which unite in the middle to form the laryngeal prominence also known as the Adam’s apple, which is well marked in males and less visible in females.

The inferior horns articulate with the lateral surfaces of the cricoid cartilage and form the cricothyroid joints which allow rotation and gliding of the thyroid cartilage resulting in changes in the length of the vocal folds.

The cricoid cartilage is shaped like a ring with a thin anterior band and a broad posterior band, and it’s the only complete ring of cartilage to encircle any part of the airway.

The cricoid cartilage is also a key landmark in the neck, because it’s situated at the level of the C6 vertebra.

This is where the carotid artery can be compressed against the C6 vertebra and also, where the larynx and trachea join, where the pharynx joins the esophagus, and the point where the recurrent laryngeal nerve enters the larynx.

The arytenoid cartilages are paired, pyramidal-shaped cartilages that articulate with the lateral parts of the superior border of the cricoid cartilage lamina.

Each arytenoid cartilage has an apex superiorly, where the corniculate cartilage can be found. Connecting the arytenoid and epiglottic cartilages there is a thin, submucosal sheet of connective tissue called the quadrangular membrane.

Posterior to the ary-epiglottic folds, there are small nodules that represent the corniculate and cuneiform cartilages.

The quadrangular membrane also has a free inferior margin that forms the vestibular ligament, which is covered by mucosa, forming the vestibular fold.

Now, back to the arytenoid cartilage, it’s apex attaches to this ary-epiglottic fold or mucosal covered ary-epiglottic ligament, which is the superior aspect of the quadrangular membrane.

The arytenoid cartilage also has a vocal process anteriorly that provides the posterior attachment for the vocal ligament, as well as a large muscular process that projects laterally from its base and acts as a lever to which the posterior and lateral cricoarytenoid muscles are attached.

Now, the elastic vocal ligaments form the submucosal skeleton of the vocal folds and extend from the junction of the laminae of the thyroid cartilage anteriorly to the vocal process of the arytenoid cartilage posteriorly.

The conus elasticus blends anteriorly with the median cricothyroid ligament, and along with the overlying mucosa it closes the tracheal inlet except for the central zone called the rima glottidis which is the opening between the vocal folds.

It consists of elastic cartilage and gives flexibility to the epiglottis, which is a heart-shaped cartilage covered with mucous membrane. It also functions as a valve, closing off the superior opening of the larynx during swallowing.

Time for a break! Can you identify the cartilages of the larynx?

Now, the vocal folds are the sharp folds of mucous membrane overlying and incorporating the thyro-arytenoid muscles and the vocal ligaments, which represent the medial free edge of the conus elasticus.

Each of the vocal folds also contains the vocalis muscle which are slender muscle slips medial to the thyro-arytenodid muscles, lateral to the vocal ligament and contain exceptionally fine fibers.

These folds produce audible vibrations when their free margins are closely opposed during phonation, and air pushed out of our lungs. When these folds are completely closed, this prevents entry of the air into the lungs.

So, during normal breathing the rima is narrow and wedge-shaped, but during forced respiration it’s wide and trapezoidal.

Also, during phonation, the rima is slit-like. The pitch of the voice is changed by variations in the tension and length of the vocal folds, in the width of the rima glottidis, and in the intensity of the expiratory effort.

This is the reason why the male voice typically becomes lower pitch after puberty, because the vocal folds increase in length.

Now, the vestibular folds extend between the thyroid and arytenoid cartilages, which mostly play a protective role, and don’t really participate in sound production so they are termed the false vocal cords.

They consist of two thick folds of mucous membrane enclosing the vestibular ligaments. Let’s take another break and see if you can identify the main structures in the laryngeal cavity.

On the other hand, the intrinsic muscles move different laryngeal components to alter the length and shape of the vocal folds and rima glottidis.