Assessments
Anatomy of the lungs and tracheobronchial tree

Anatomy of the Lungs & Tracheobronchial Tree 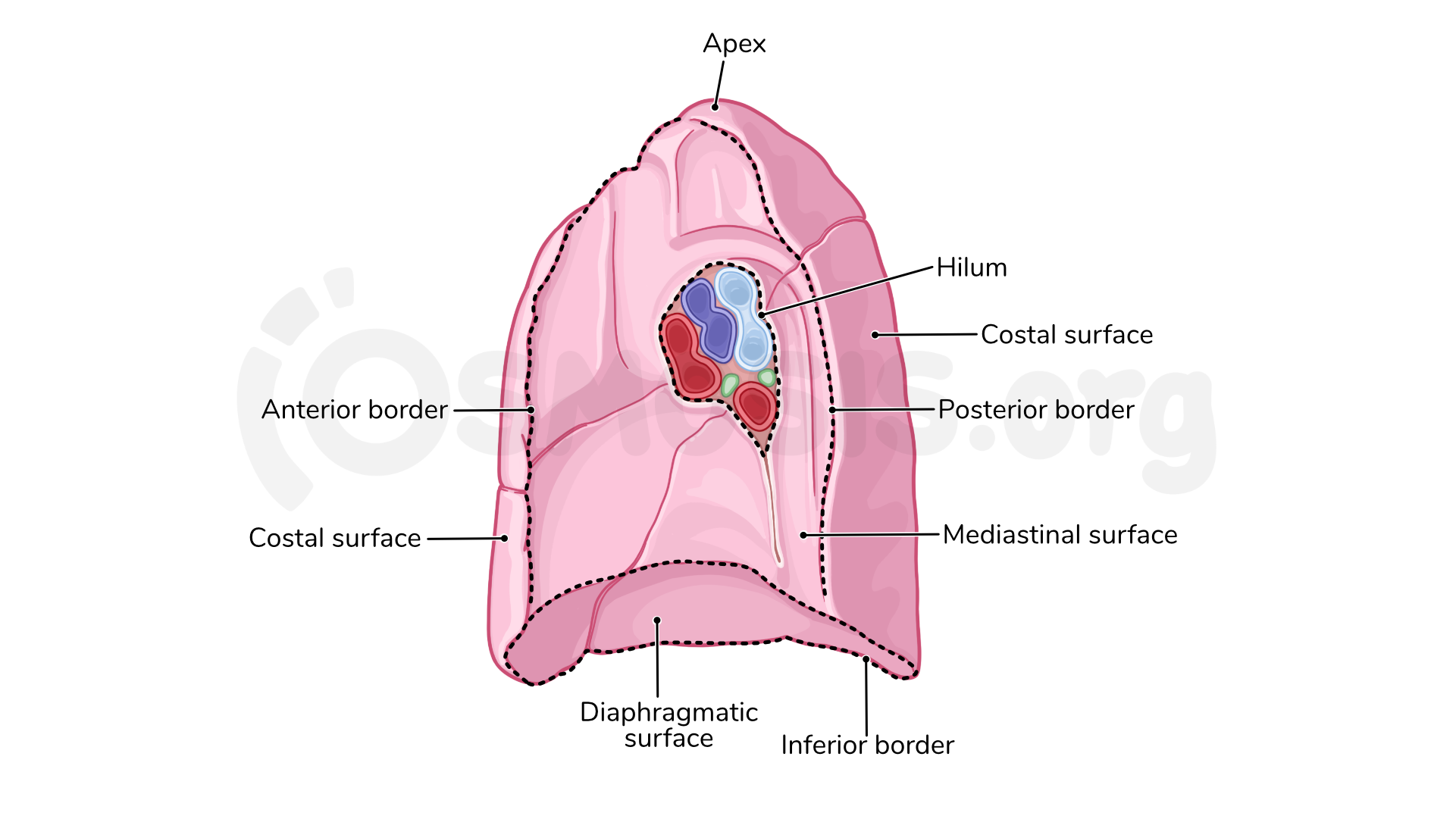 Figure 1. Mediastinal surface of the right lung showing the borders of the lung. 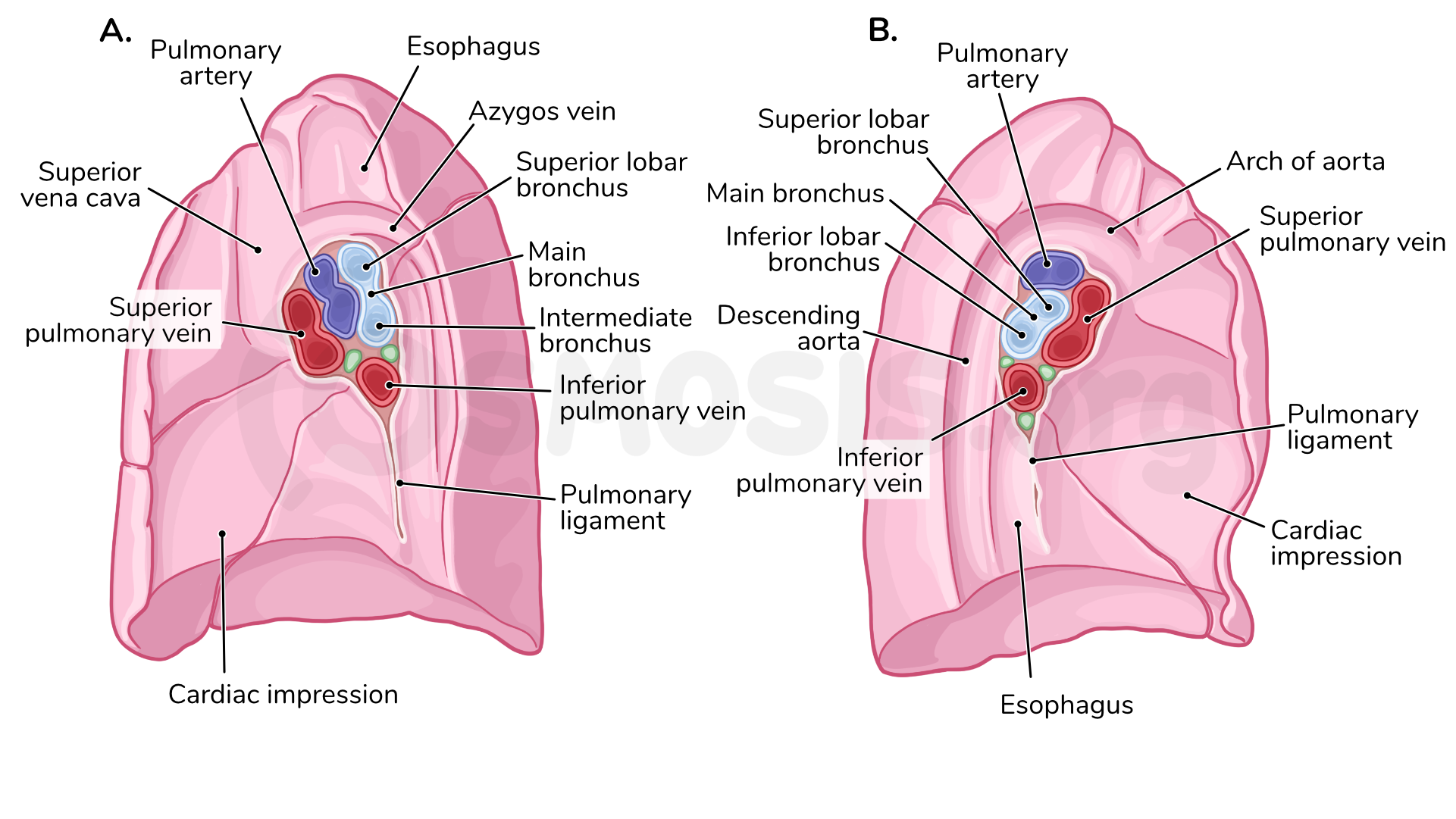 Figure 2. A right and B left lung showing impressions on the mediastinal surface. 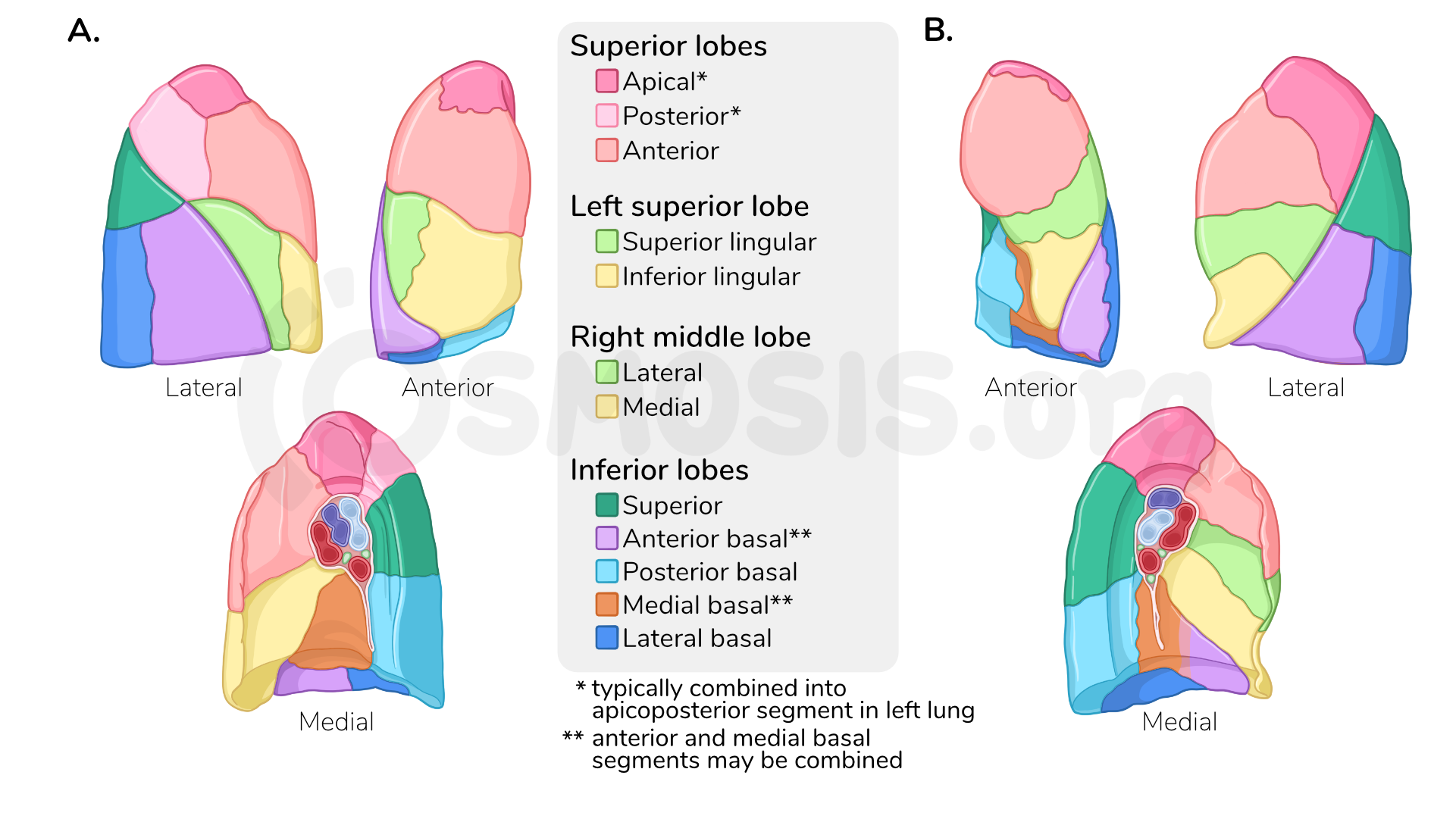 Figure 3. Bronchopulmonary segments of the A right and B left lung. 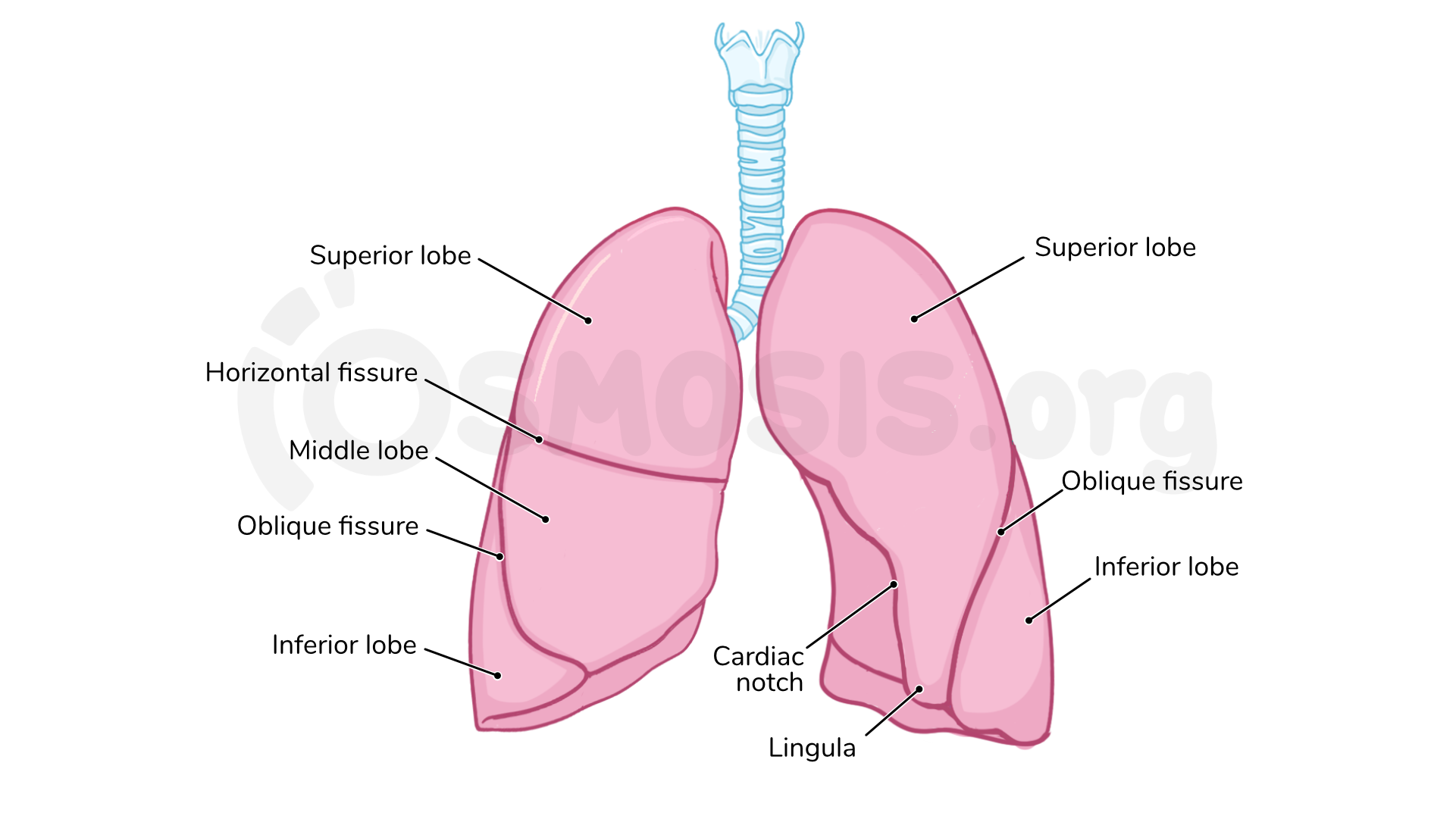 Figure 4. Anterior view of the lungs. Figure 5. A Anterior view of the tracheobronchial tree and B isolated terminal bronchiole. 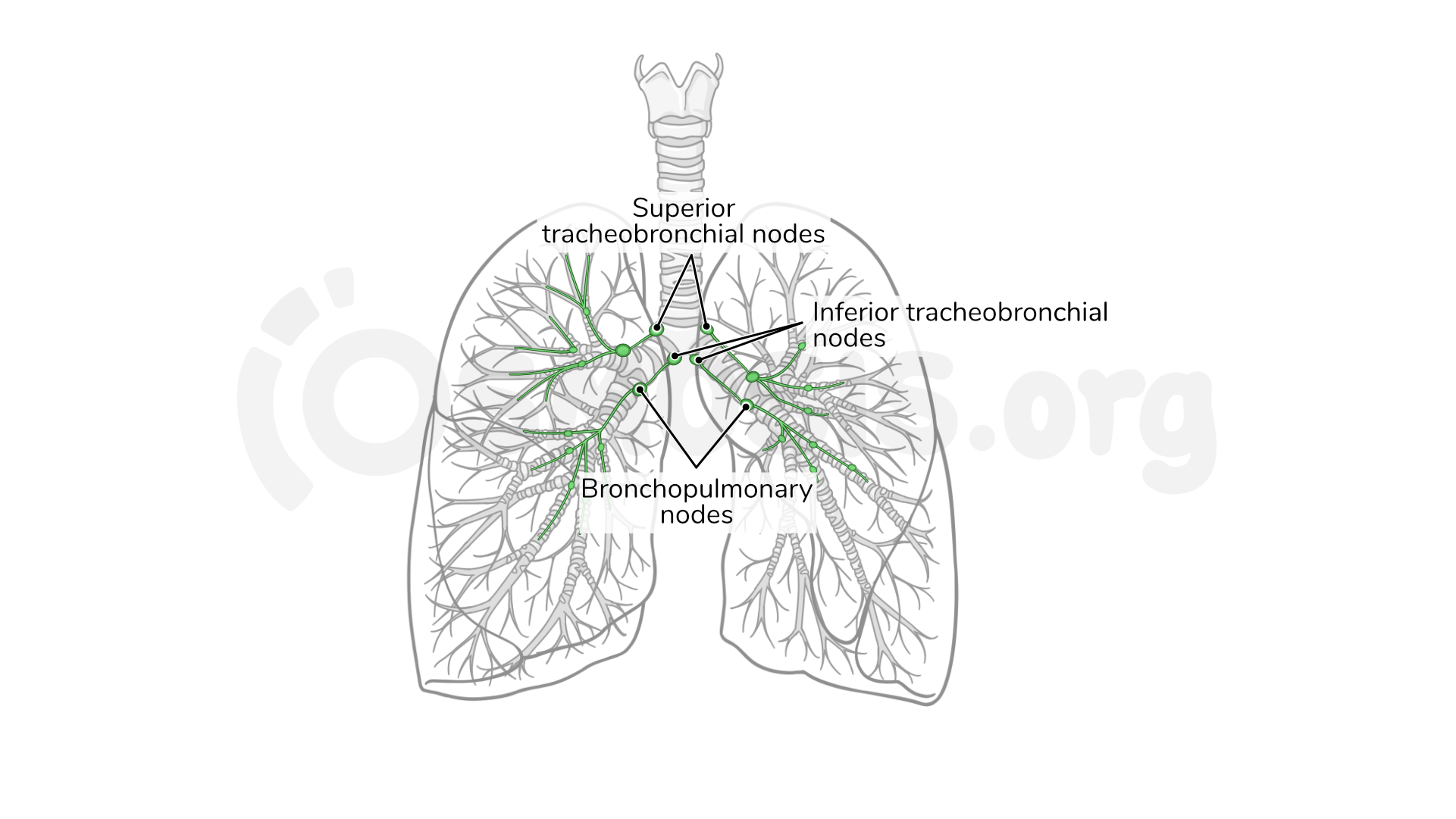 Figure 7. Anterior view of the lymphatic drainage of the lungs. 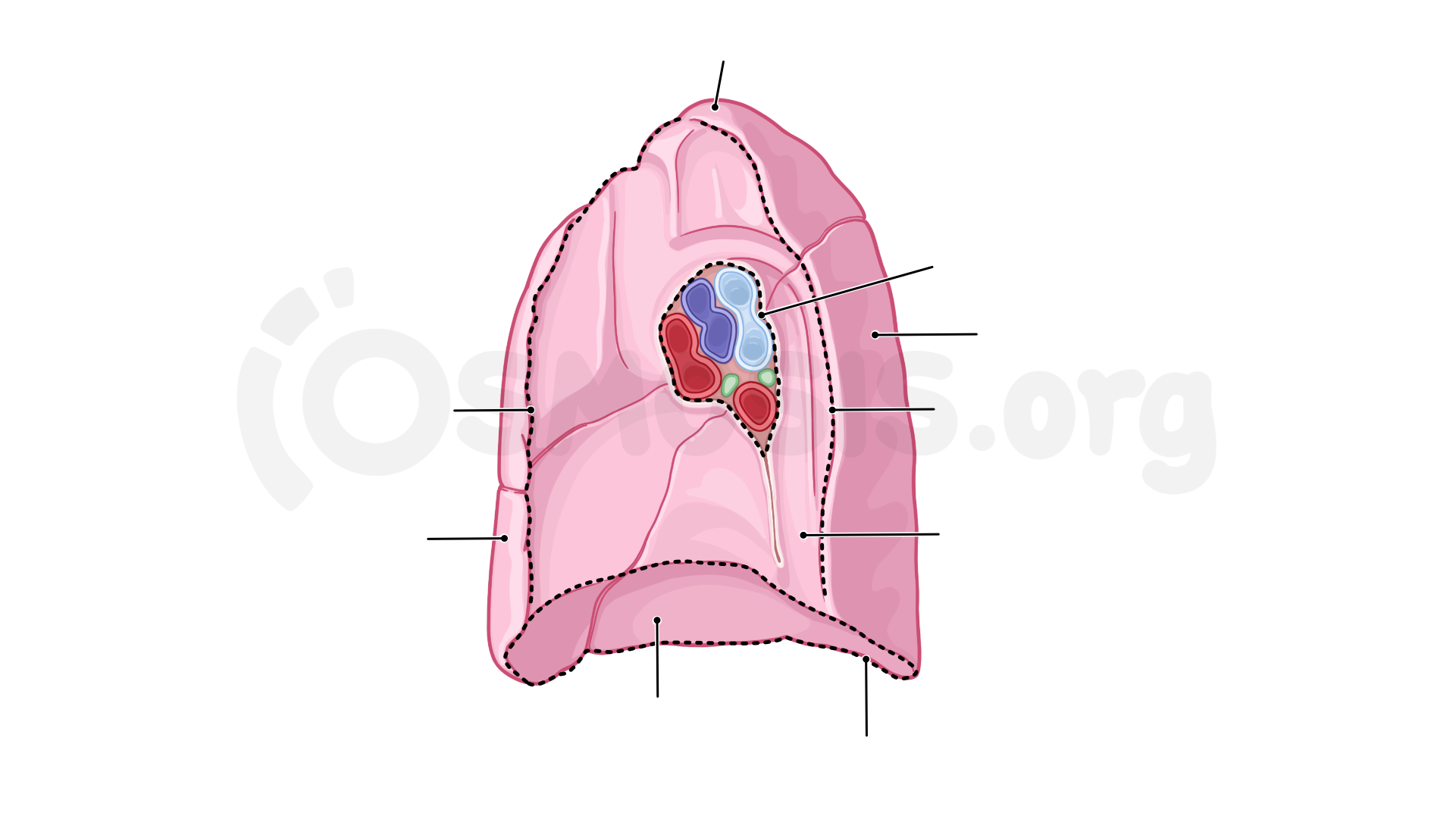 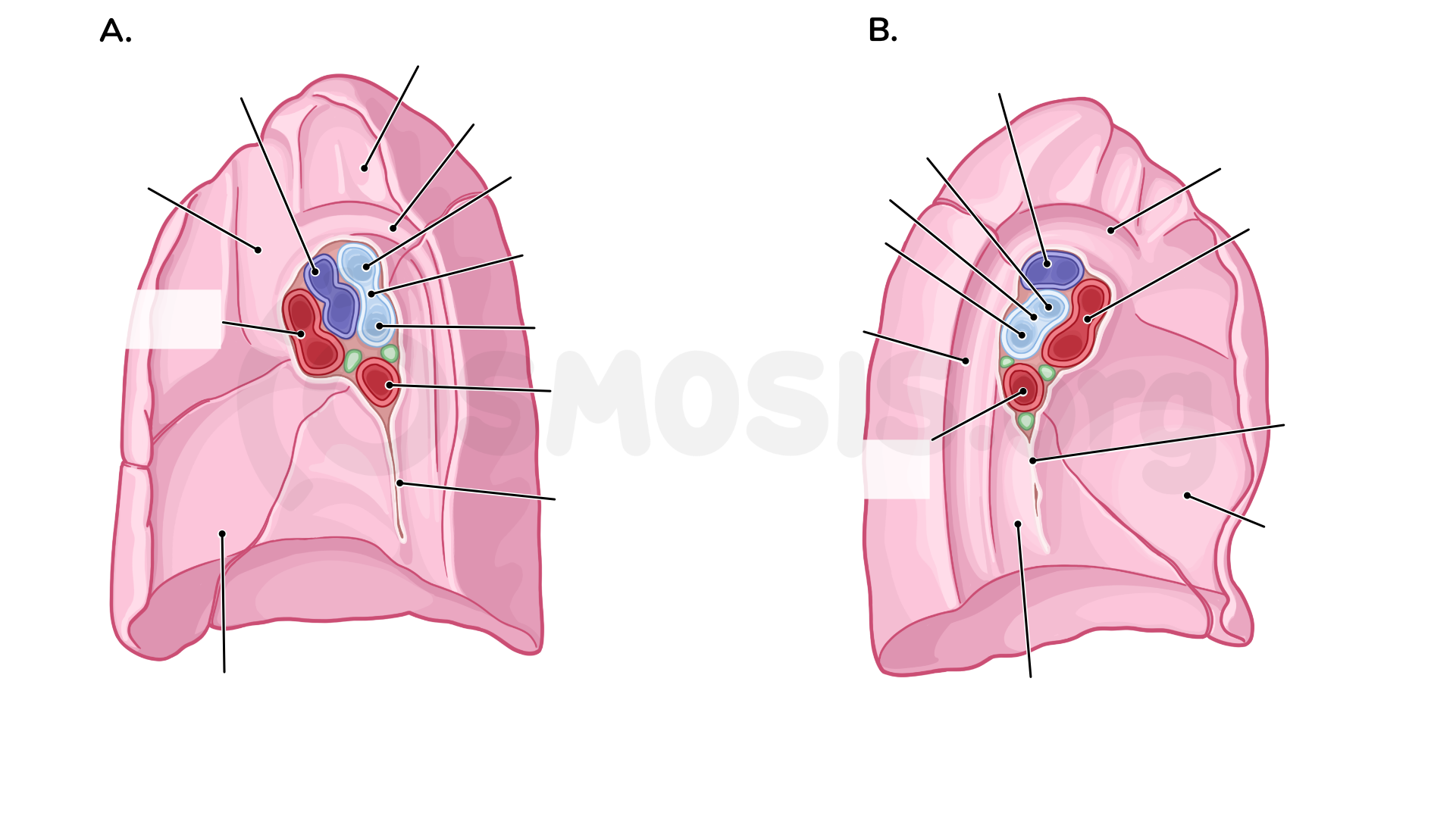 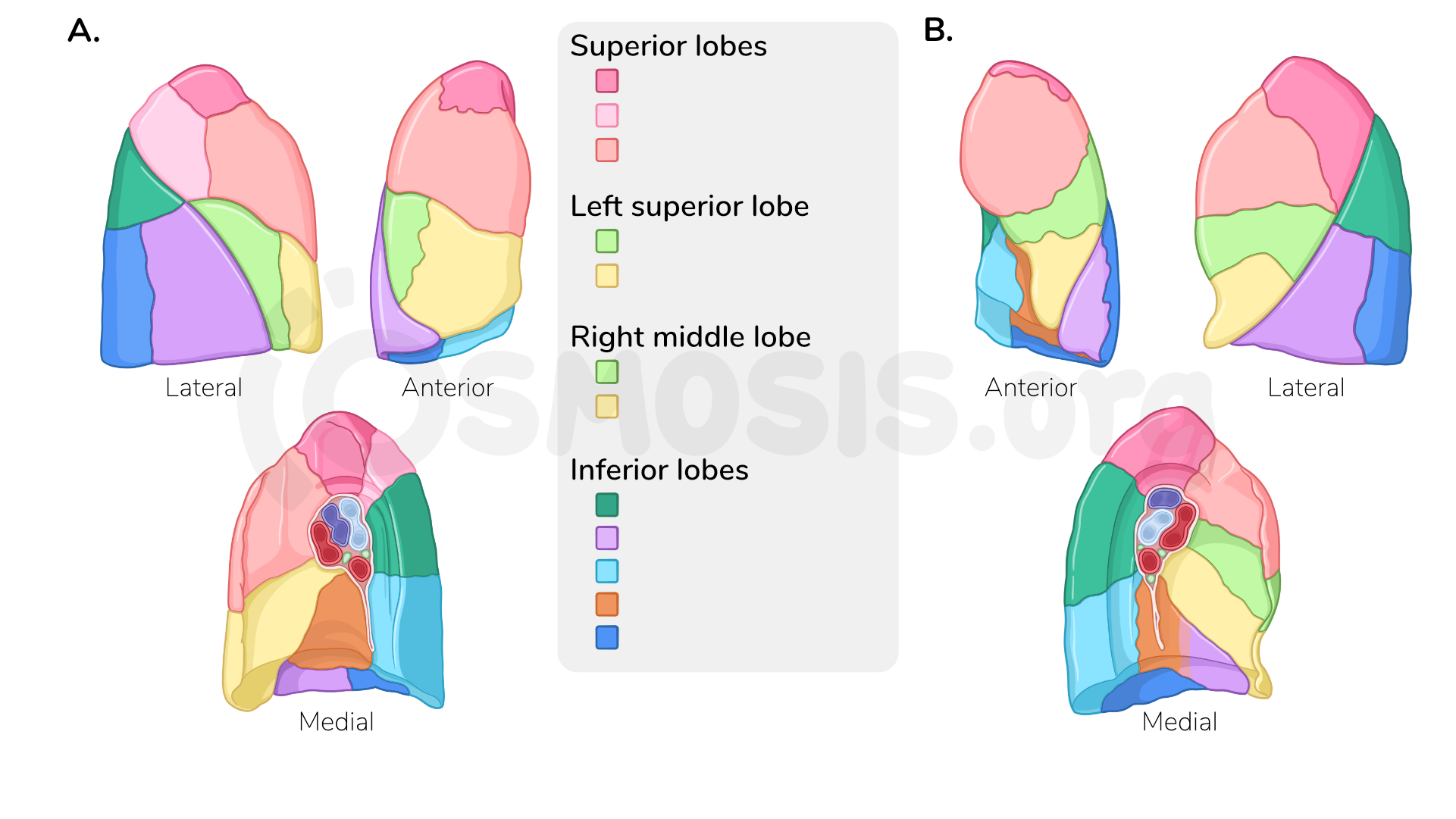 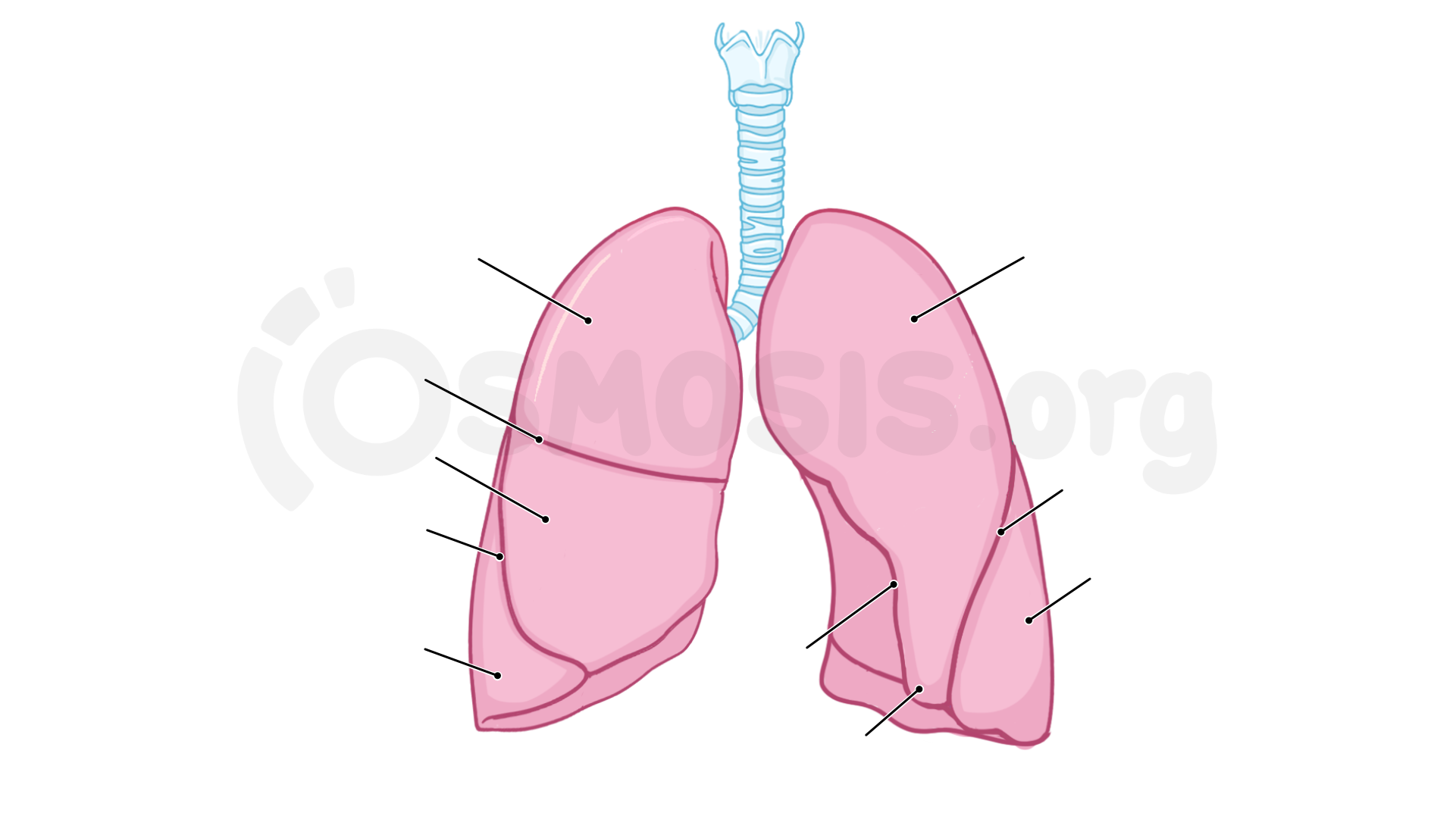 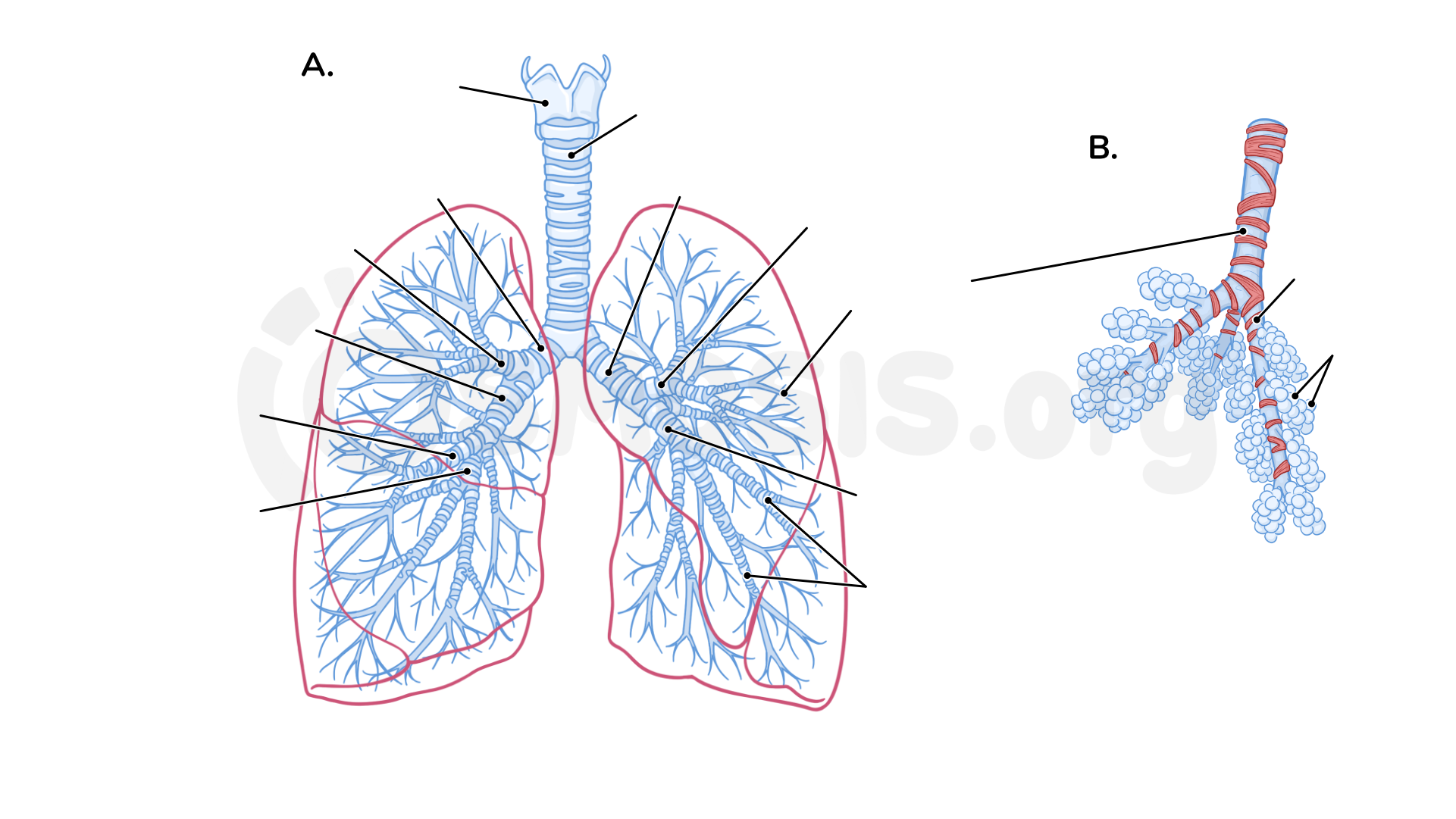 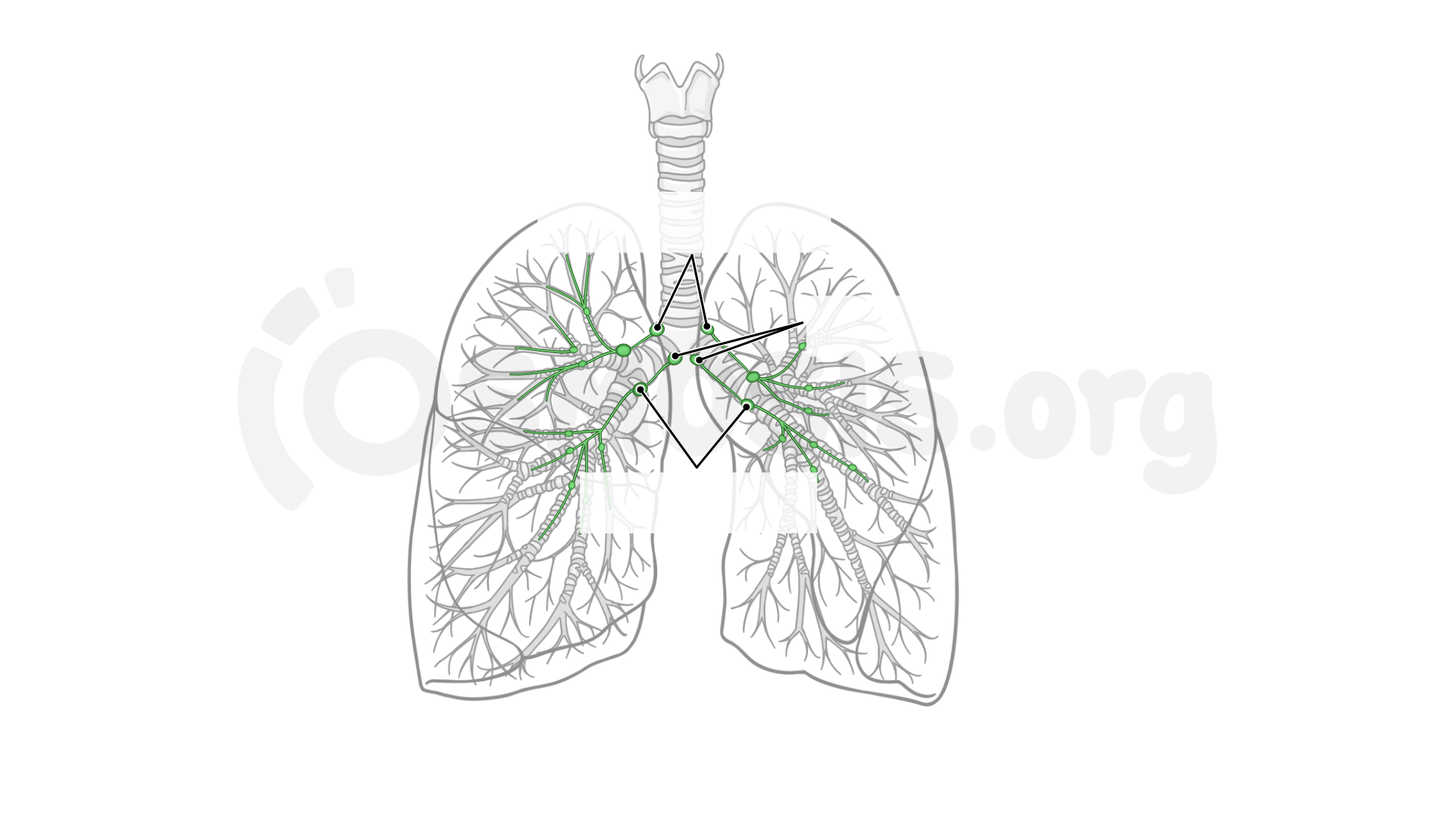 It’s also important to notice that the heart is turned and extends towards the left side of the thoracic cavity, imposing on the left lung markedly more than the right so the anatomy of the two lungs is not completely symmetrical.

Each lung is covered by a membrane called the pleura, which is subdivided into the visceral pleura that intimately adheres to the lung and the parietal pleura that lines the pulmonary cavity.

Between them, there’s the pleural cavity, which is normally filled with a thin film of fluid.

The root of the lungs is made of structures like the main bronchus arteries, and veins.

The lungs are light, soft and spongy, and each of them has an apex a base, 3 surfaces: costal, mediastinal and diaphragmatic, and 3 borders: anterior, inferior and posterior.

The apex is the blunt superior end of the lung above the level of the first rib into the root of the neck, while the base is the concave inferior surface of the lung that rests on the diaphragm.

Now for the specifics.

The right lung is larger and heavier than the left, but it’s shorter and wider, because the right dome of the diaphragm is higher and the heart and pericardium are more to the left.

The right lung is divided into three lobes, superior, middle and inferior, by the horizontal fissure and the oblique fissure, which can be seen on all the surfaces of the lung.

On the other hand, the left lung has a single left oblique fissure, which can also be seen on all surfaces and divides the left lung into two lobes: superior and inferior.

Also on the left lung, there’s a deep cardiac notch on the anterior border, caused by the deviation of the heart towards the left.

This leaves an impression on the antero-inferior aspect of the superior lobe and also shapes a tongue-like process called the lingula.

The lingula extends below the cardiac notch and goes in and out of the costomediastinal recess during breathing.

Next, there are the lung surfaces.

The costal surface of both lungs is large, smooth and convex and related to the costal pleura, which separates it from the ribs, costal cartilages and the intercostal muscles.

The concavity is deeper in the right lung because the right dome is higher due to the liver sitting below.

Finally, the mediastinal surface of the lung is concave because it’s related to the middle mediastinum, which contains the pericardium and heart.

This surface includes the hilum which receives the root of the lung.

On an embalmed cadaver, several impressions can be seen on the mediastinal surface of the lung.

On the right lung, there’s a groove for the esophagus and arch of the azygos vein as it arches superior to the lung hilum to drain into the superior vena cava which may also cause a groove in the right lung.

The left lung will also have a continuous groove for the arch of the aorta, as well as the descending aorta and a smaller area for the esophagus.

And just a few words on borders. The anterior border is where the costal and mediastinal surfaces meet anteriorly.

On the right lung, it’s almost straight, while on the left lung it’s deviated by the cardiac notch.

The inferior border is thin and sharp and bounds the diaphragmatic surface of the lung and separates it from the costal and mediastinal surfaces.

It also projects into the costodiaphragmatic recess of the pleura.

The posterior border is where the costal and mediastinal surfaces meet posteriorly, and it’s broad and rounded, and lies at the side of the thoracic region of the vertebral column.

The lungs are attached to the mediastinum by the roots of the lungs, made up by the bronchi and associated bronchial vessels, the pulmonary arteries, the superior and inferior pulmonary veins, as well as the pulmonary plexuses of nerves and lymphatic vessels.

On a section of the right and left lung root, we can identify the position of the main bronchus, and the pulmonary artery and vein in relationship to one another.

But keep in mind there may be slight variations from person to person. First, the main bronchus is typically against the posterior middle boundary in both lung roots.

On anatomical dissection, the bronchus is easiest to identify due to its firm cartilaginous structure when feeling it.

Second, the pulmonary artery is the superior most structure on both the left and right roots.

However, on the right side, you may see the first two branches of the pulmonary artery.

These roots enter and exit the lungs through a doorway that is called the hilum of the lung, similar to how the roots of a plant enter into the ground.

Medial to the hilum, towards the central mediastinum, the lung root is enclosed within the area of continuity between the parietal and visceral layers of the pleura.

Inferior to the root of the lung, this continuity between parietal and visceral pleura forms the pulmonary ligament, which extends between the lung and mediastinum, directly anterior to the esophagus..

The pulmonary ligament consists of a double layer of pleura separated by a small amount of connective tissue. To visualize this, think of wearing a large lab coat.

Your forearm represents the root of the lung, and the sleeve is the pleura, which if it is too large will droop down in a double layer.

Now, let’s play a game and see if you can tell which lung is which based on their external appearance!

Alright, now let's look at the tracheobronchial tree which starts with the trachea, right below the larynx.

Below the larynx, the walls of the trachea are surrounded by C-shaped rings of hyaline cartilage.

The trachea bifurcates into two main bronchi or primary bronchi at the level of the transverse thoracic plane or sternal angle.

They pass inferolaterally to enter the lungs at each hilum.

The right main bronchus is wider, shorter and has a more vertical trajectory than the left one and passes directly into the right hilum.

The left main bronchus passes inferolaterally, inferior to the aortic arch and anterior to the esophagus and thoracic aorta to reach the left hilum.

Now, within each lung, the main bronchi divide to form the branches of the bronchial tree, all of which actually belong to the root of the lung.

The portion of the right main bronchus that continues inferiorly and gives rise to the middle and lower lobar bronchi is often referred to as the intermediate bronchus.

These bronchopulmonary segments are functionally distinct segments which is important for surgeons who operate on the lungs.

Finally, both of the lung’s lower lobes have a superior segment, along with an anterior, posterior, medial and lateral basal segment, where in the left lung the anterior and medial segments may be combined.

Beyond the tertiary segmental bronchi, the tracheobronchial tree branches 20 to 25 more times, resulting in about 20 to 25 generations of branching conducting bronchioles.

Each terminal bronchiole gives rise to several generations of respiratory bronchioles, which have scattered alveoli, or thin-walled outpouchings, extending from their lumens.