Assessments
Anatomy of the nose and paranasal sinuses 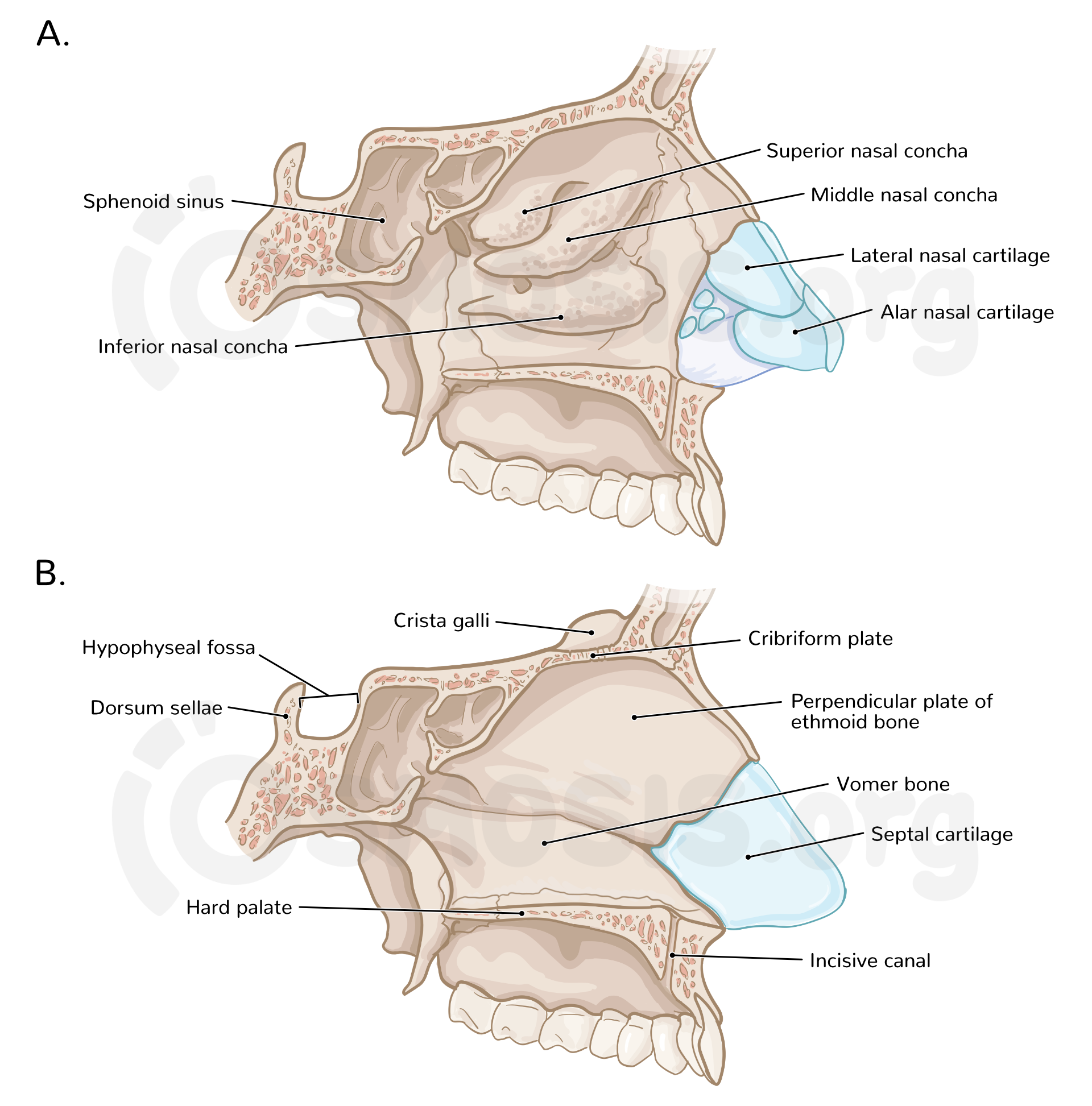 Figure 1: Bony structure of the nose, parasagittal view A. lateral wall and B. septum. 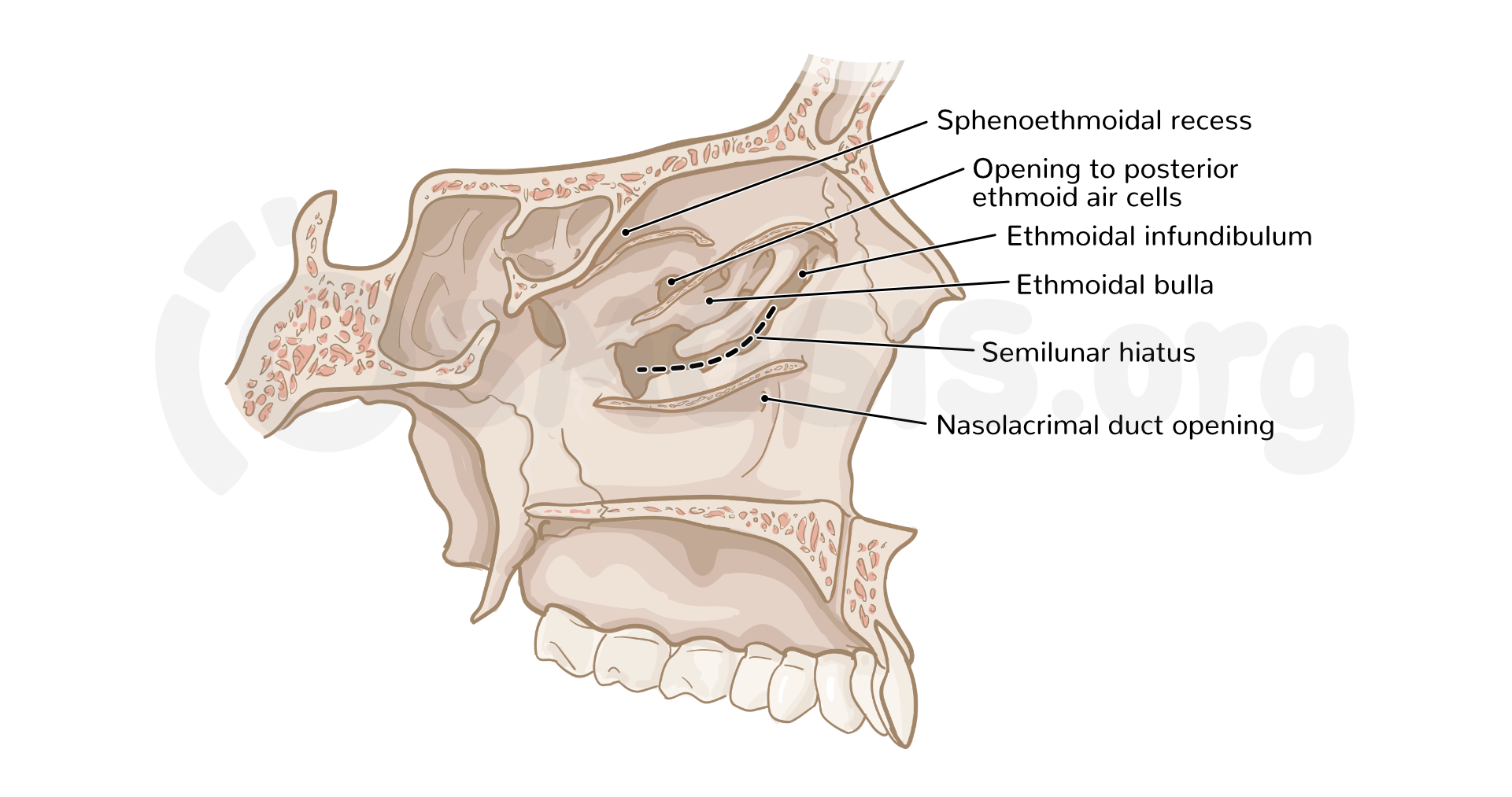 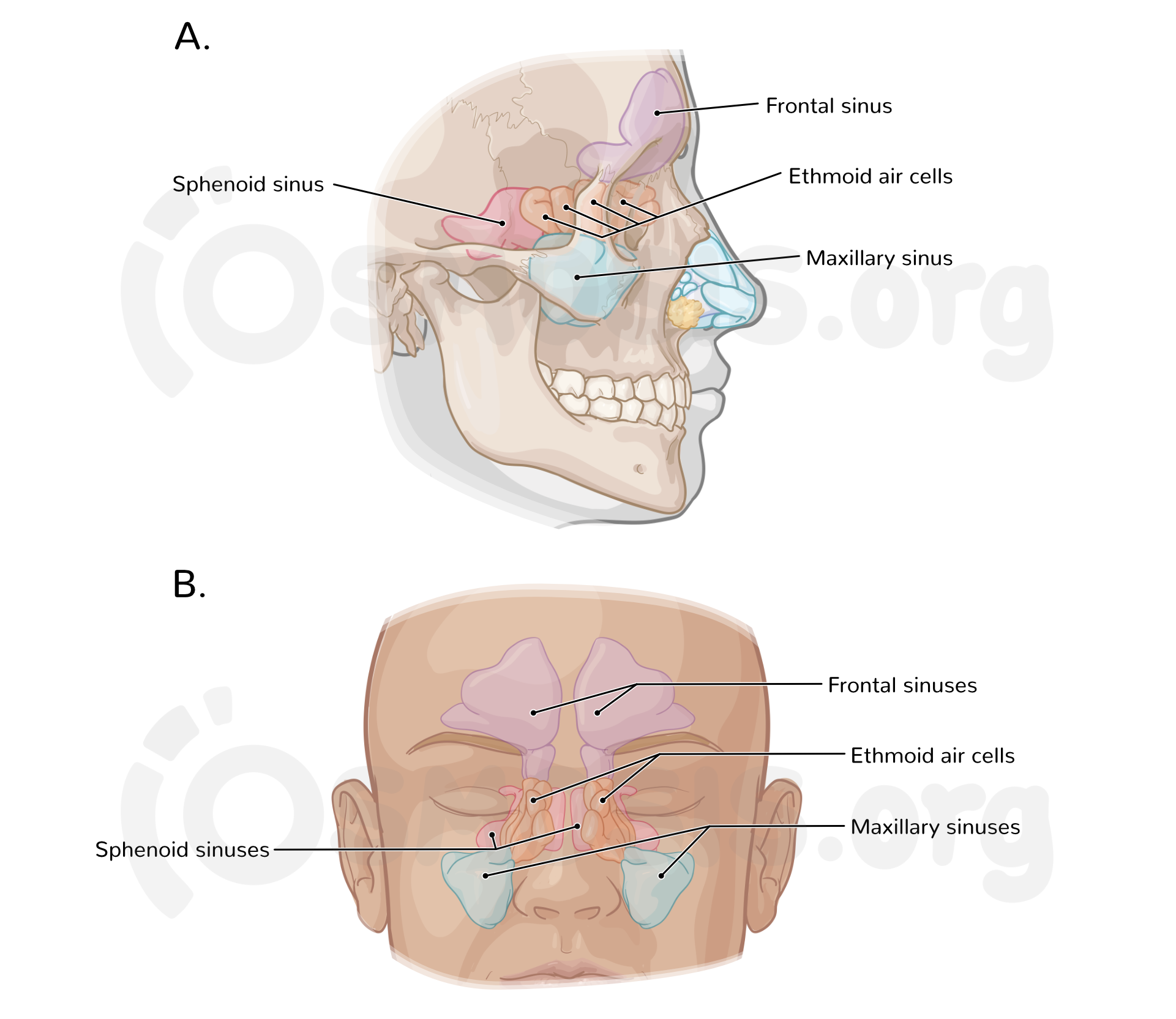 Figure 4: Anatomy of the paranasal sinuses, A. Anterior view and B. Lateral view. Figure 5: Arteries of the nasal cavity A. Lateral wall and B. Medial wall. 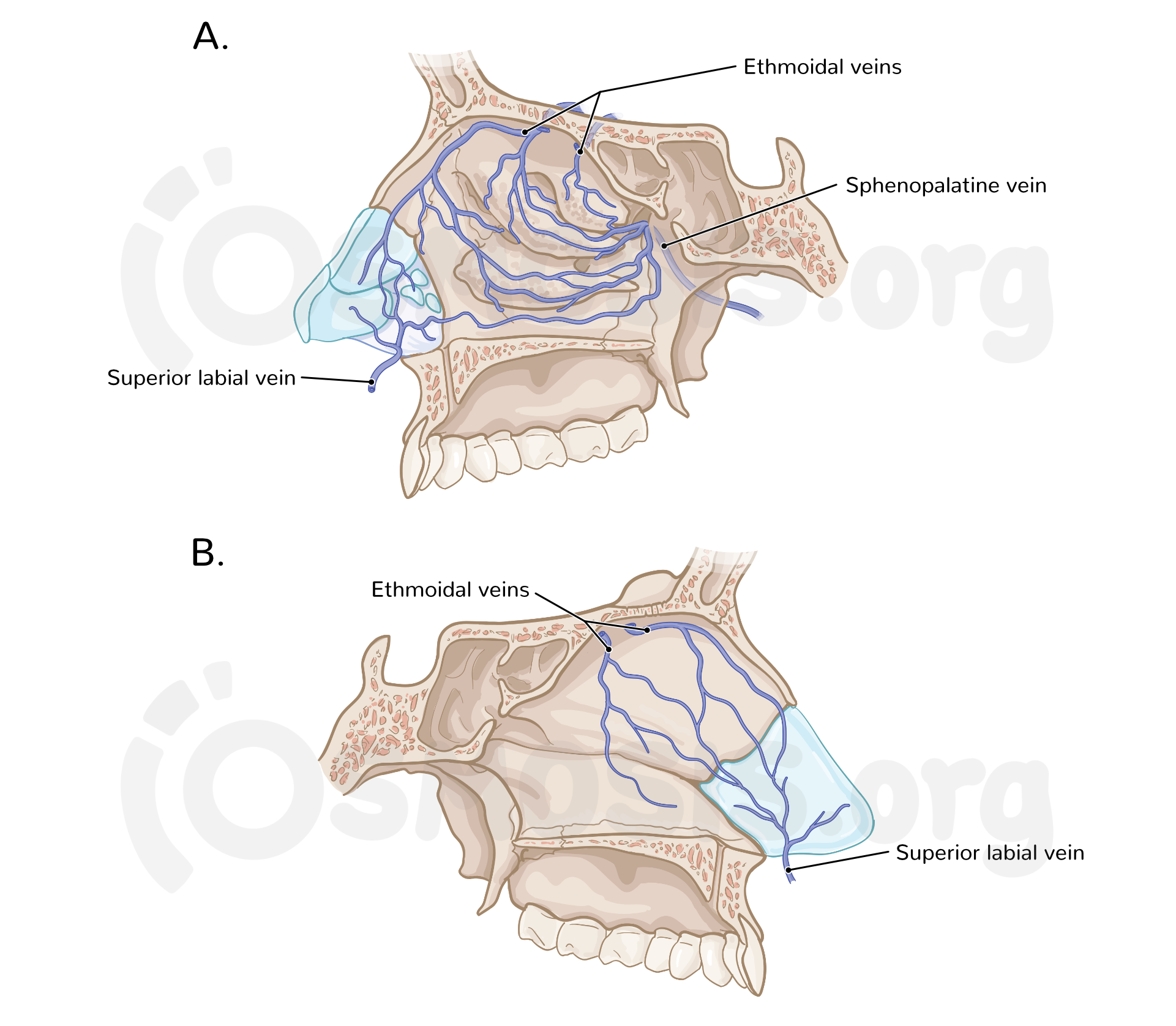 Figure 6: Veins of the nasal cavity A. Lateral wall and B. Medial wall. 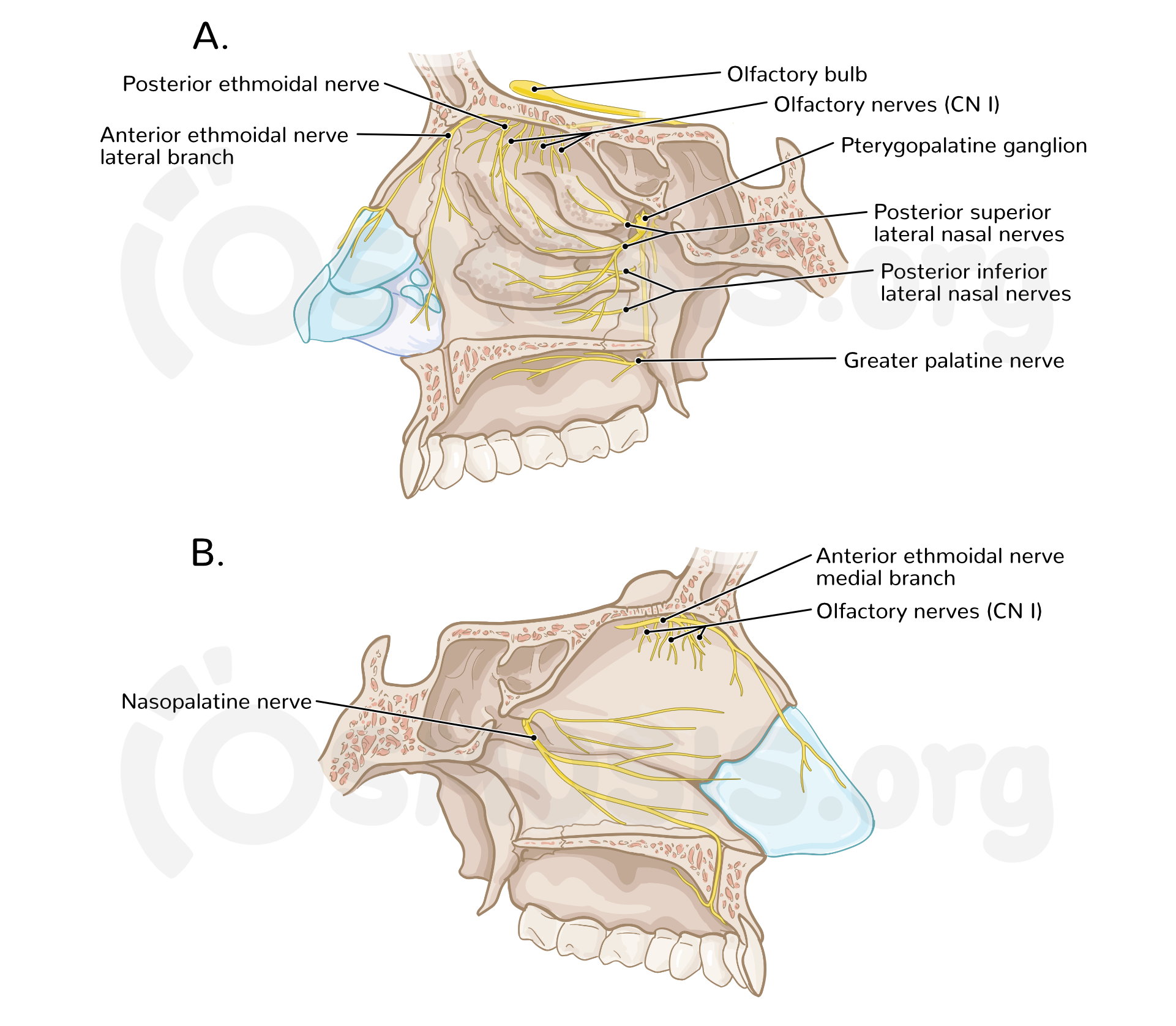 Figure 7: Innervation of the nasal cavity A. Lateral wall and B. Medial wall. 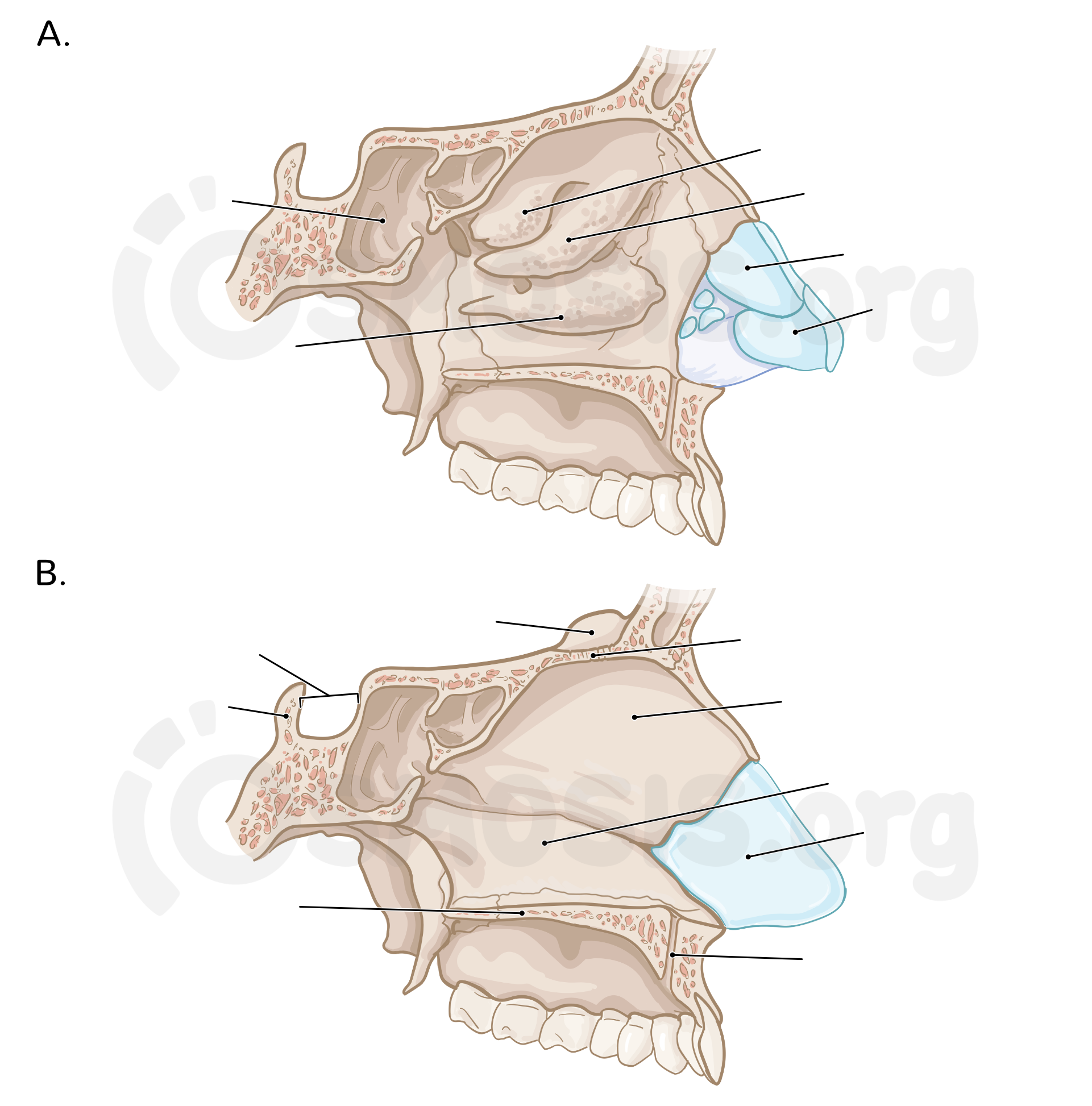 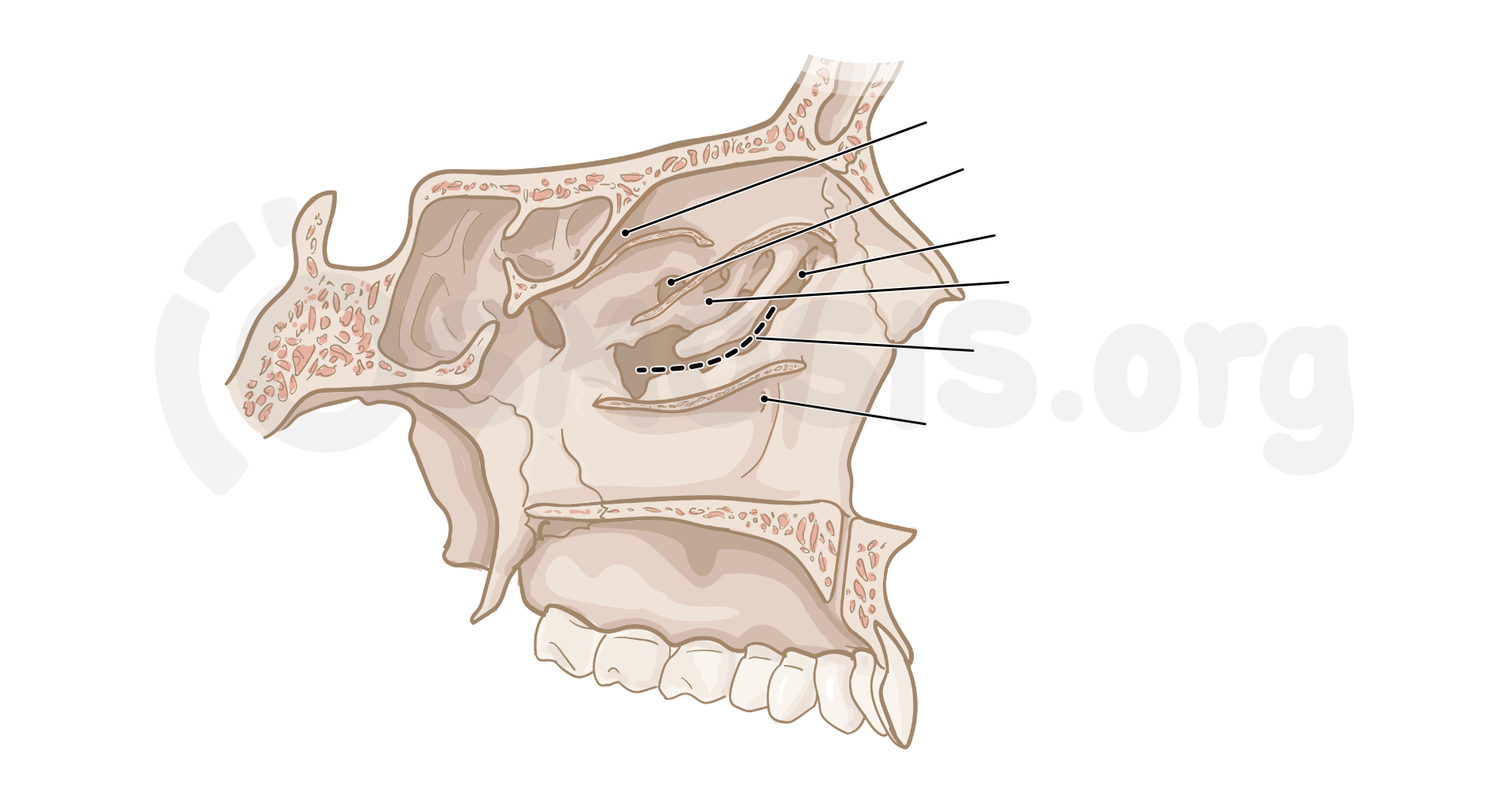 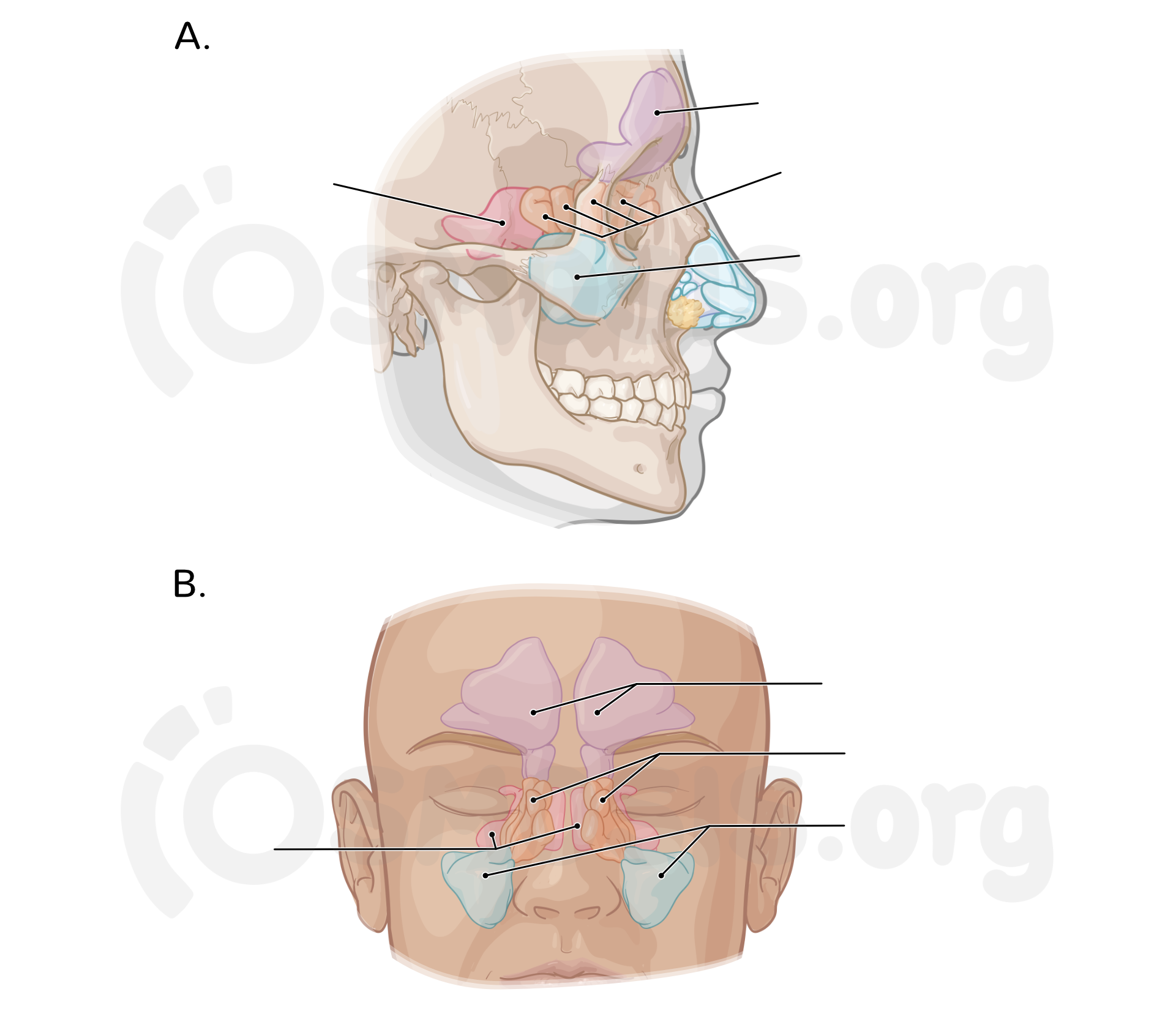 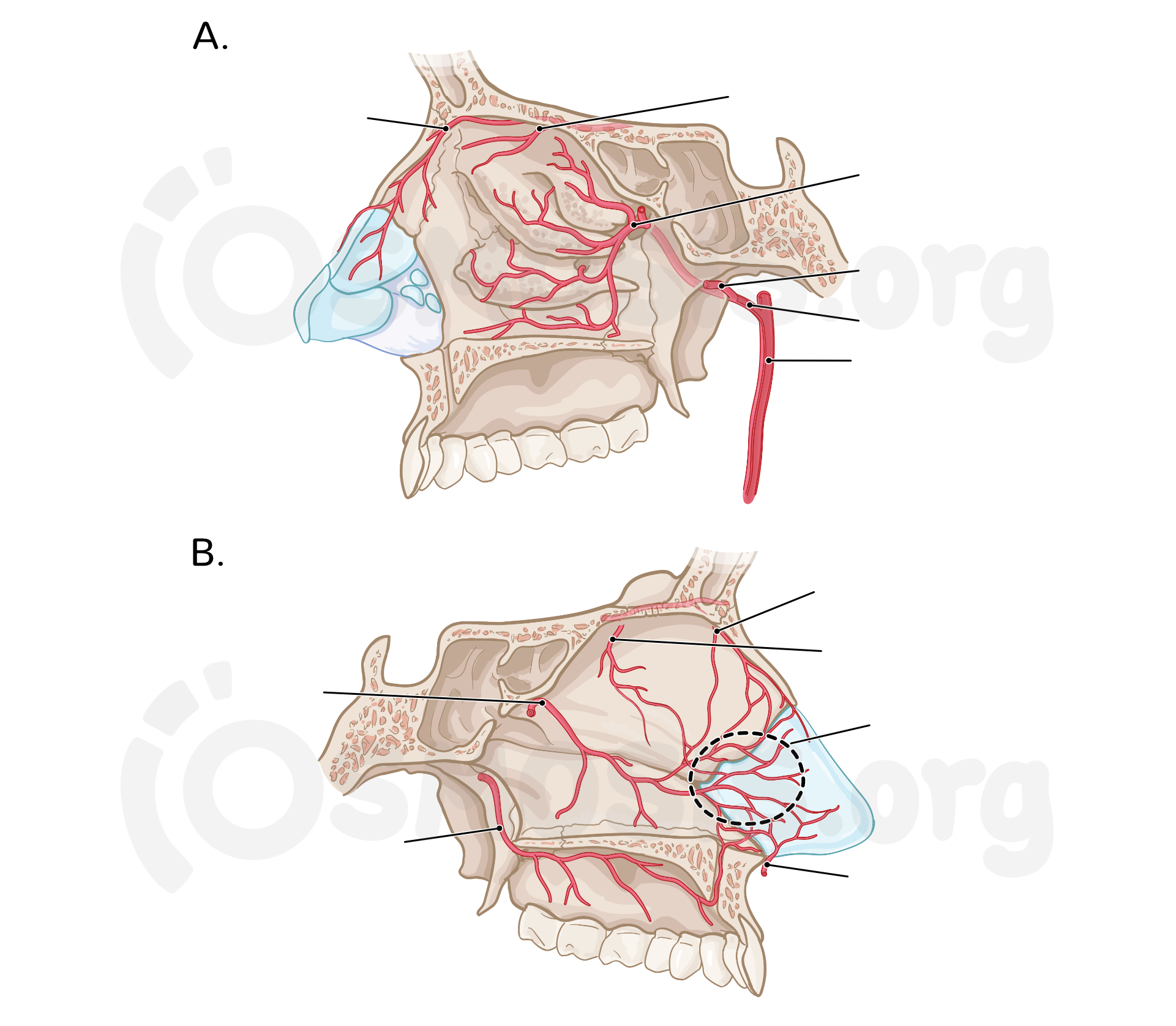 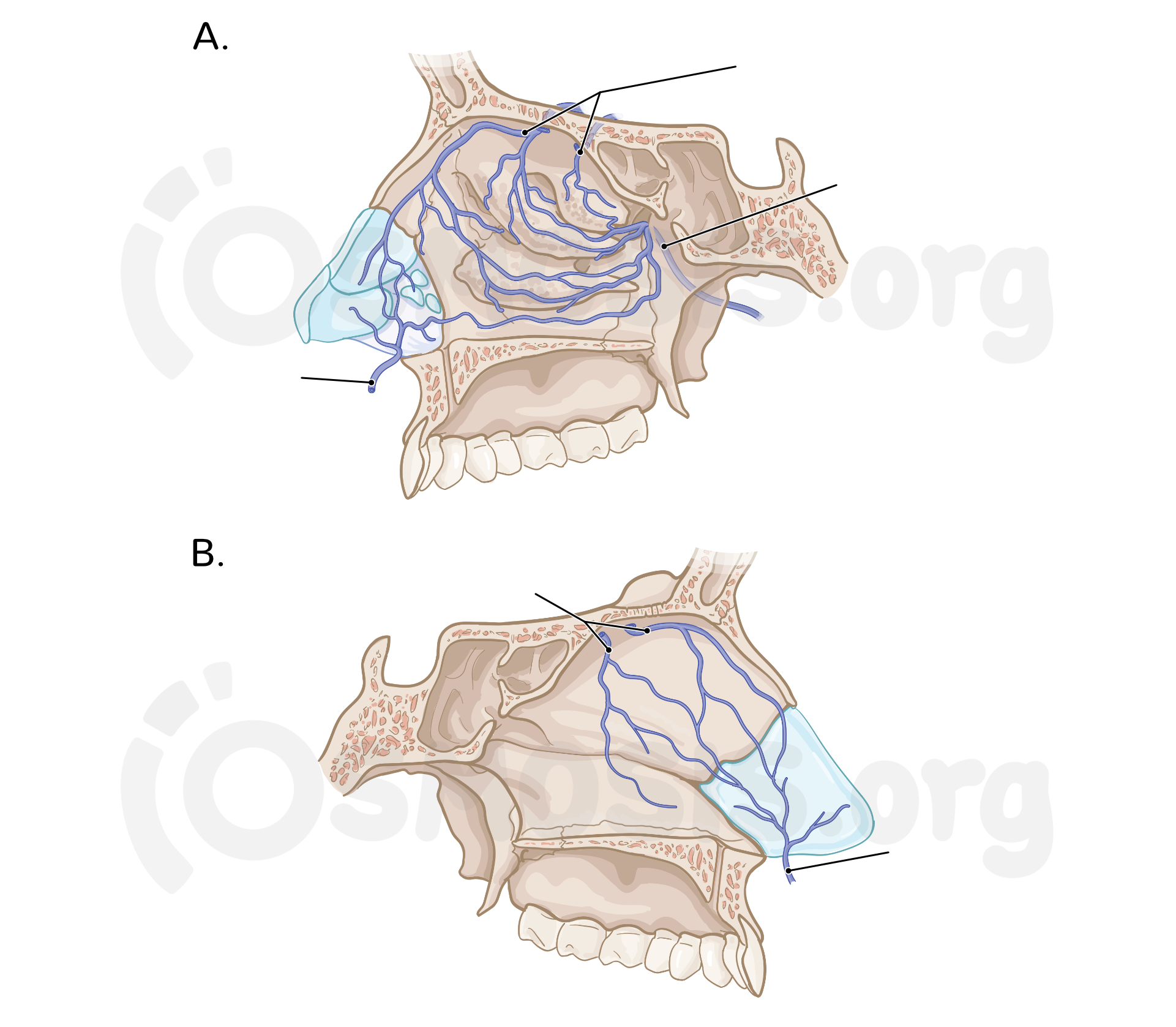 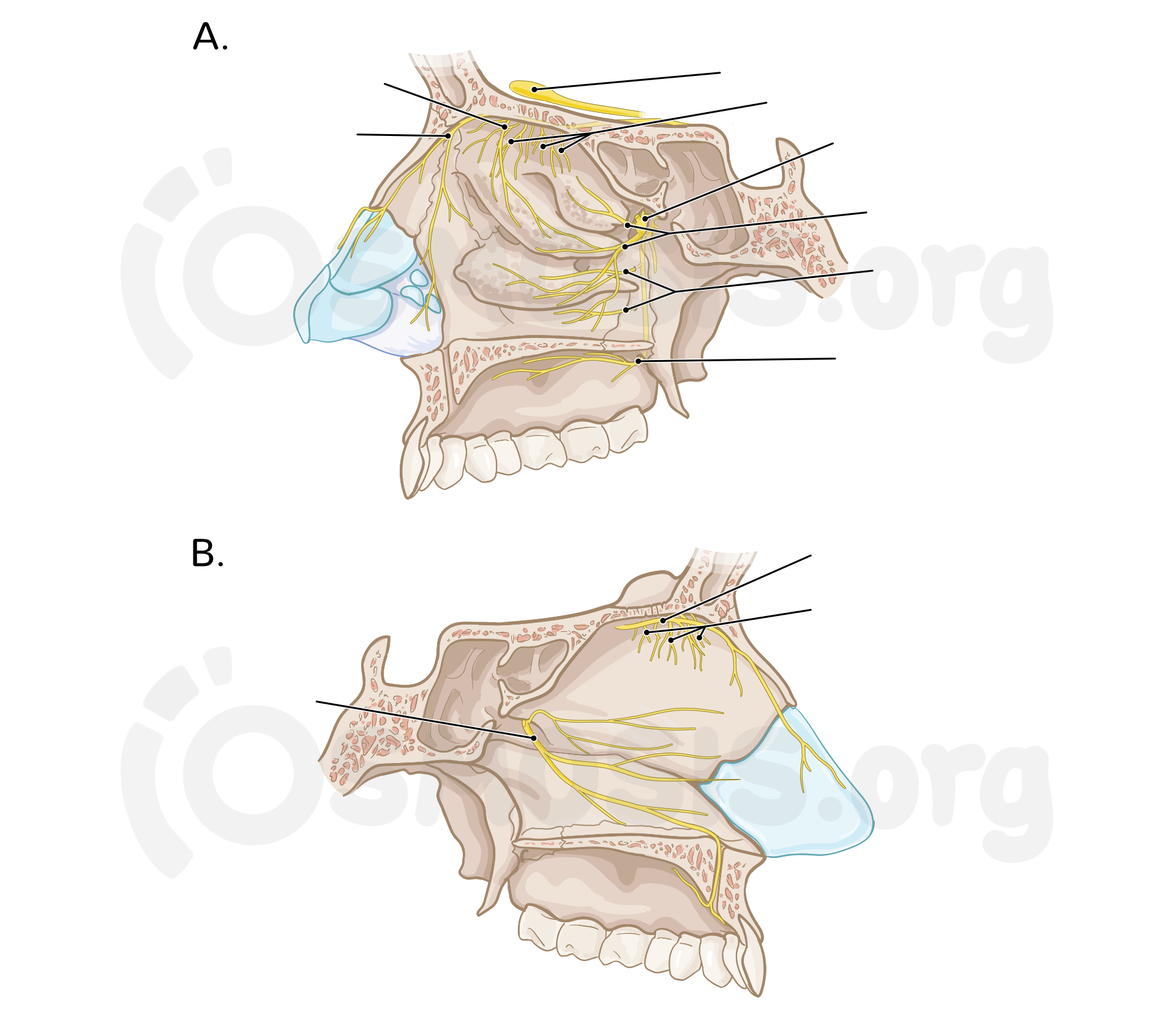 The nasopalatine (CN V2) nerve is indicated in the image below.

We use our sense of smell for many things, like smelling cookies baking in the oven, but we also use it to help us taste, like when we take a big bite of those cookies!

Our sense of smell is thanks to our nose, but actually our nose does much more than just smell. It also provides a passage for air to reach the lungs, and also helps warm and filter that air before it gets down there. Now, let’s see what the nose knows!

Now, the external nose is the part that we see protruding from the midline of our face. Generally speaking, the nose has a pyramidal-shaped structure with two openings called the nares or nostrils. These openings are surrounded laterally by the alae - meaning wings - of the nose, and separated from one another medially by the nasal septum.

Inside the nostrils is the nasal vestibule, which is lined by skin and small hairs that help filter dust particles from the air that passes through. The dorsum of the nose begins at the root, located between the eyebrows, and slopes downwards to the apex, which is the tip of the nose.

The bony skeleton gives a base to the nose and includes the nasal part of the frontal bone - located at the root of the external nose - two paired nasal bones, the frontal processes of the maxillary bones, and in the midline, there is a superior and posteroinferior bony part of the nasal septum.

Let’s take a peek inside the nose now! As we enter the nasal cavity, we first pass through the nares into the nasal vestibule, which is lined by skin. Moving deeper, past the vestibule, the nasal cavity is no longer lined with skin, but with nasal mucosa.

The inferior two thirds of the nasal mucosa is known as the respiratory area, which is lined with respiratory epithelium and is responsible for warming the air we breath and trapping particles.

The superior third of the nasal mucosa is known as the olfactory area, which is lined with olfactory epithelium and contains the olfactory receptors responsible for the sense of smell.

Now, the nasal cavities are similar to duplex houses! They are connected in the middle, mirror one another, and have a roof, a floor, and a medial and lateral wall.

Okay then, let’s raise the roof! The roof of the nose is quite narrow, and is formed by parts of the ethmoid, frontal, and nasal bones. The major portion of the roof is formed by the cribriform plate of the ethmoid bone, which is a flat horizontal bony plate with small perforations for the fibers of the olfactory nerve to pass through.

The sloping region, anterior to the cribriform plate, is formed by the frontal and nasal bones, and a portion of the septal and alar cartilages. Posterior to the cribriform plate, the roof of the nasal cavities is a bit more irregular, and is formed by parts of the sphenoid bone, a portion of the vomer bone, and the sphenoidal process of the palatine bone.

On the other hand, the lateral wall is quite irregular, and consists of six bones. The ethmoid bone forms the majority of the upper part of the lateral wall. Below it, are the bones that make up most of the flat surface of the lateral wall, from anterior to posterior these are: the frontal process of the maxilla, the lacrimal bone, the inferior concha, the perpendicular plate of the palatine bone, and the medial pterygoid plate of the sphenoid bone.

The main features that extend from the lateral wall are three bony structures known as the nasal conchae, which create a greater surface area to warm the air. The superior and middle nasal conchae are extensions of the ethmoid bone, while the inferior conchae are individual bones.

These conchae divide each nasal cavity into four lateral air passages: the spheno-ethmoidal recess, located above and posterior to the superior conchae; and the superior, middle and inferior meatus, located below their respective conchae. These four lateral passages open medially into a fifth air passage called the common nasal meatus.

All right, we’re a little nosy and wanna know how much you can remember, so here’s a little test. Feel free to pause the video and label the missing parts of the lateral and medial wall from A to F.

Awesome! Now, before we discuss the sinuses that surround the nose, let’s take a look at where they drain in the nose by slicing through the three conchae! Within the spheno-ethmoidal recess a small opening is located, and this is where the sphenoidal sinus drains. In the superior meatus, the openings of the posterior ethmoidal air cells, or ethmoid sinus, can be found.

Finally, within the inferior meatus is the opening of the nasolacrimal duct that drains the lacrimal fluid or tears from the lacrimal sac, which is why your nose runs when you cry!

Now that we know where they drain in the nasal cavity, let’s explore these sinuses, also known as the paranasal sinuses. The paranasal sinuses are lined with respiratory mucosa and are named after the bones they are located in, which are the frontal, maxillary, ethmoid, and sphenoid. There are two triangular-shaped frontal sinuses, which are located posterior to the root of the nose.

The ethmoid sinuses, sometimes referred to as ethmoidal air cells, are smaller and are further divided into anterior, middle, and posterior ethmoidal sinuses. All of them are carved inside the ethmoidal labyrinth, between the nasal cavities and the orbit.

Lastly, the two sphenoidal sinuses are located inside the body of the sphenoid. The shape of these sinuses is quite variable, but you can think of them like two cubes separated by a septum.

Test time! Let’s see if you can identify the paranasal sinuses labeled from A to D here.

All righty! Now, let’s move onto the vasculature of the nose. The medial and lateral walls of the nasal cavity are supplied by five arteries, which are all branches from the internal and external carotid arteries.

Now, we are going to explore the arterial supply of the nasal cavity like an open book, since a few arteries supply both walls. These are the sphenopalatine artery and the anterior and posterior ethmoidal arteries.