Anatomy of the Oral Cavity 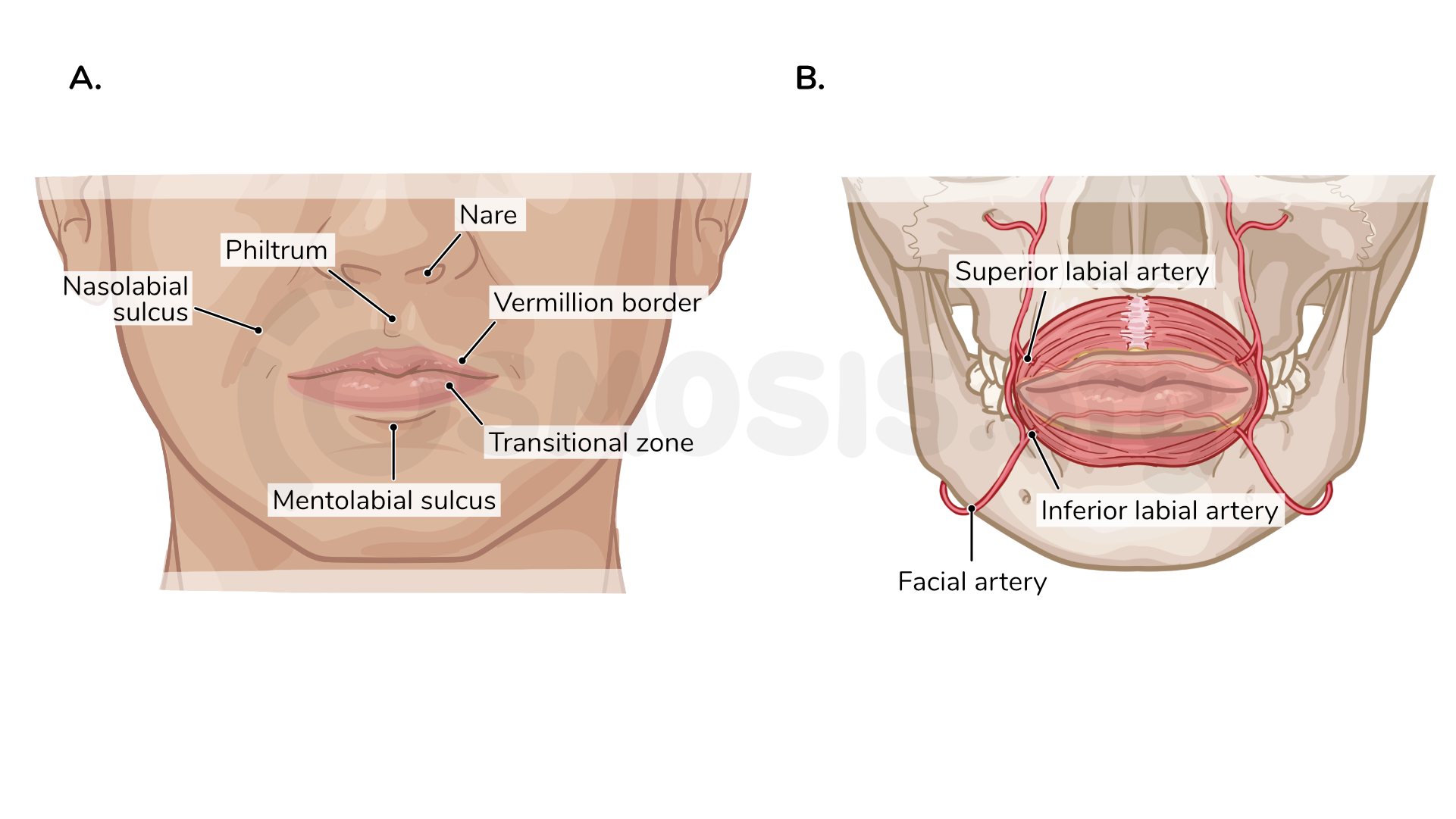 Figure 1. Anterior view of the A external mouth and lips and B arterial supply to the lips. 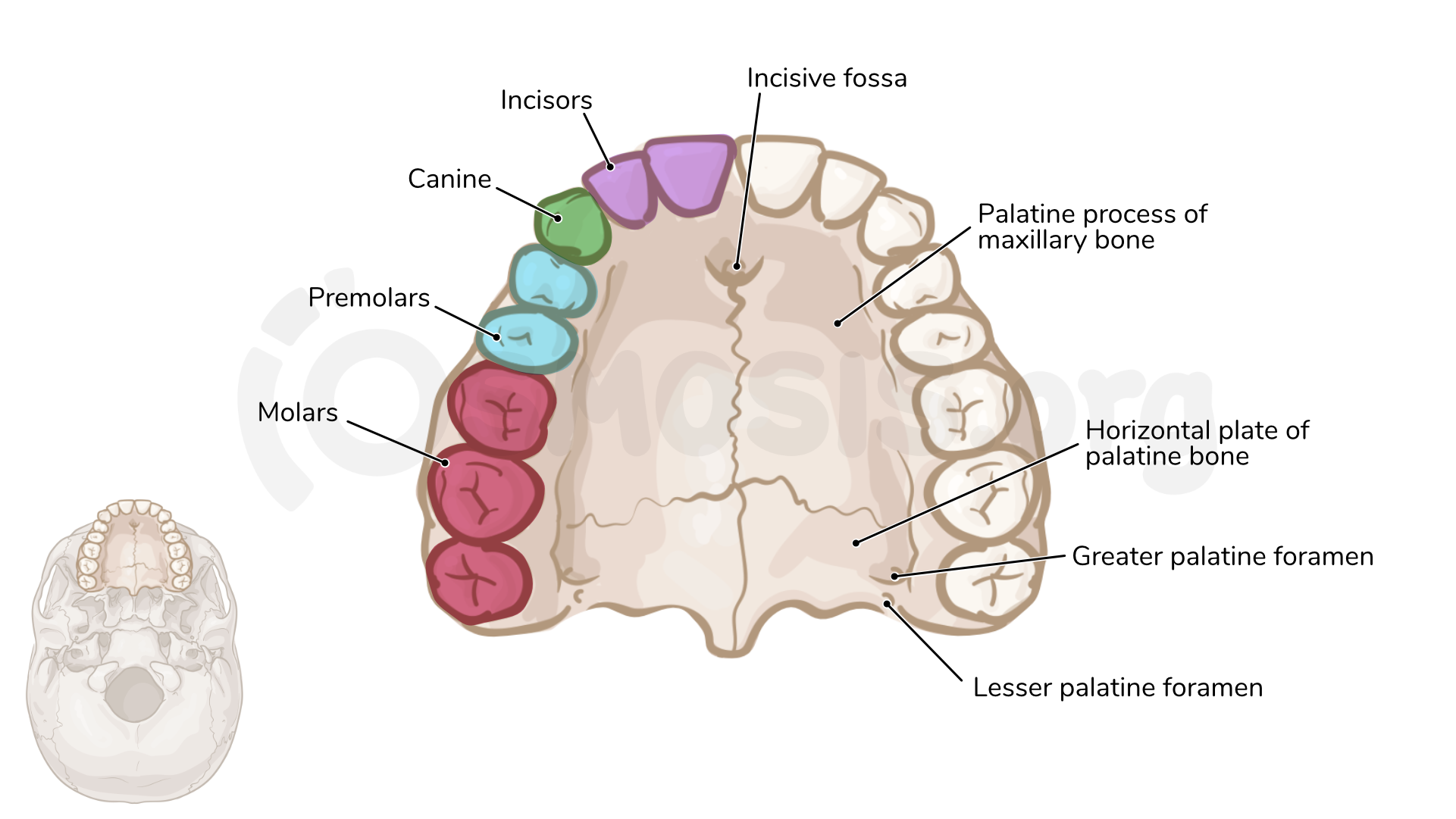 Figure 2. Inferior view of the maxilla. 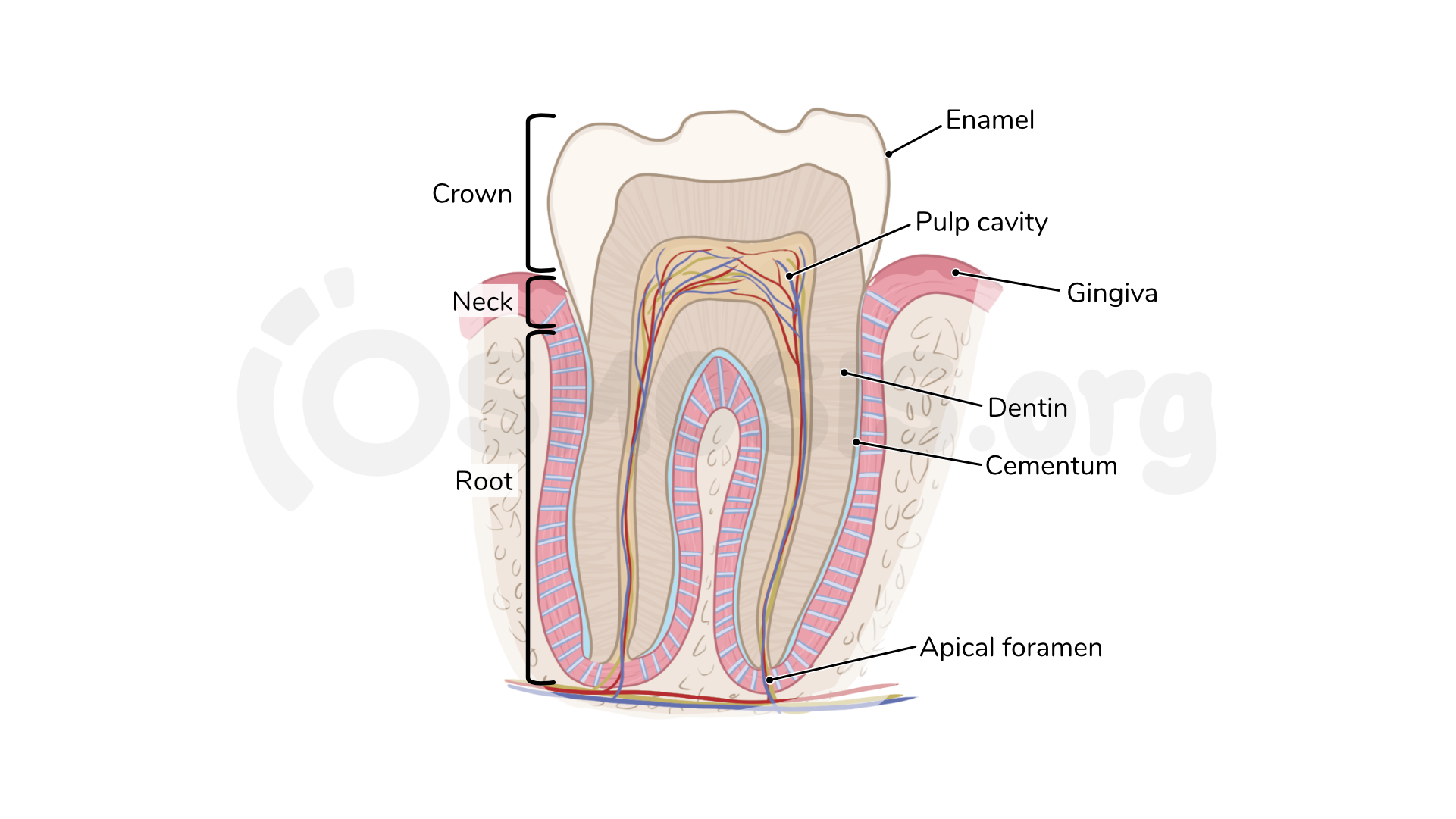 Figure 3. Cross section of a tooth. Figure 4. Lateral cross-section showing the A innervation of the lips B and teeth and gingiva. 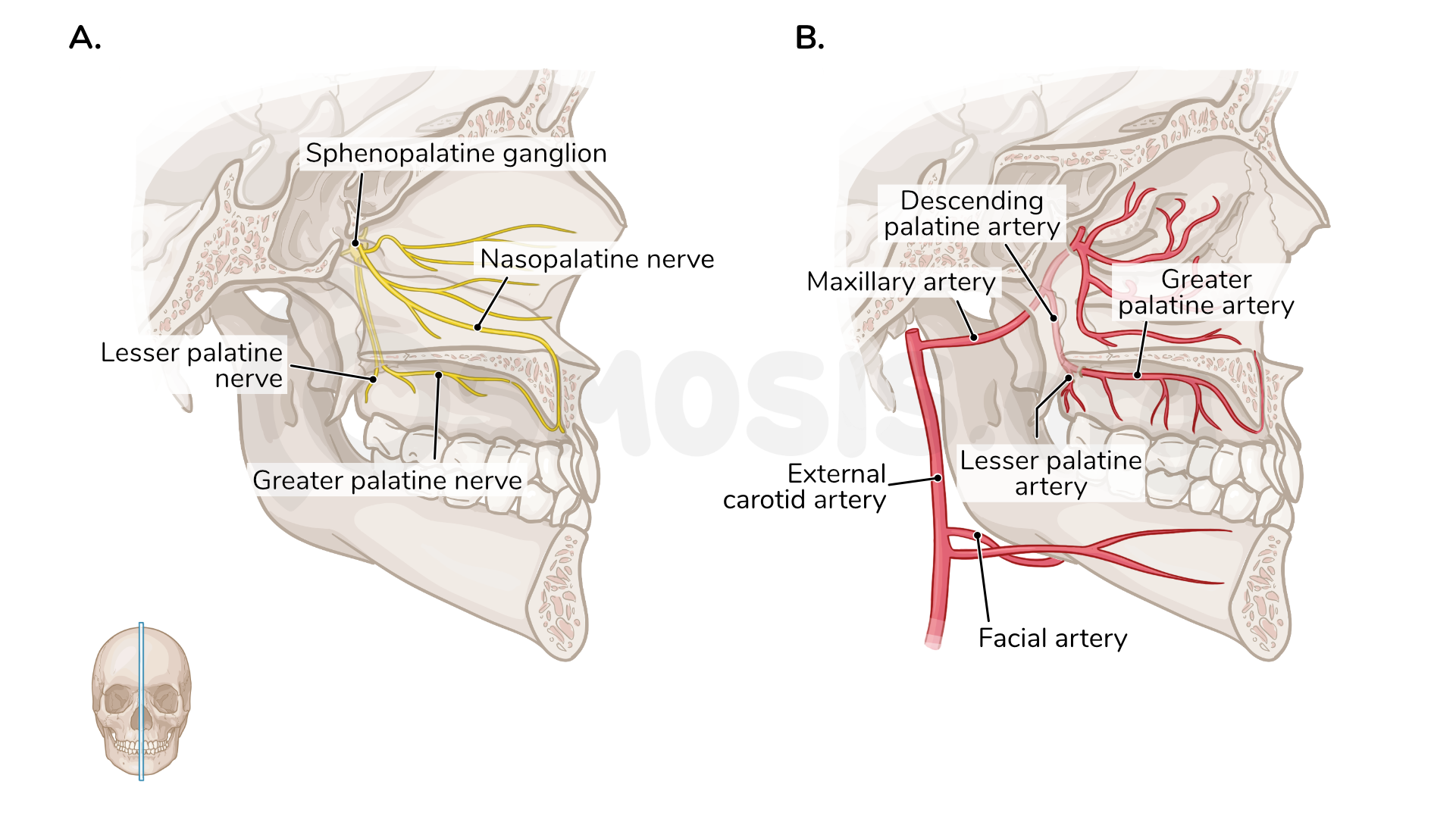 Figure 5. A Innervation of the palatal gingiva and palate. B Arterial supply of the palate. 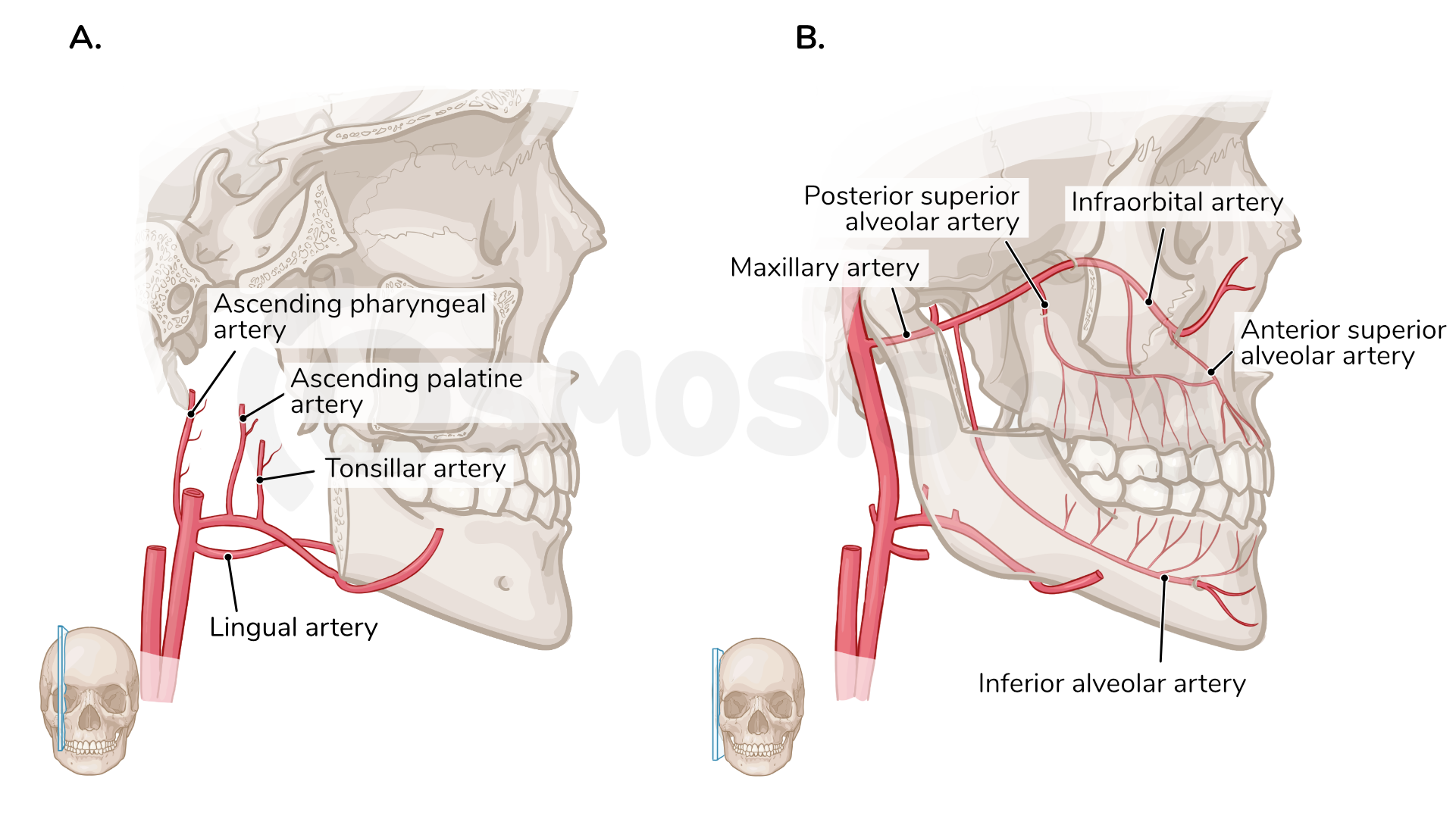 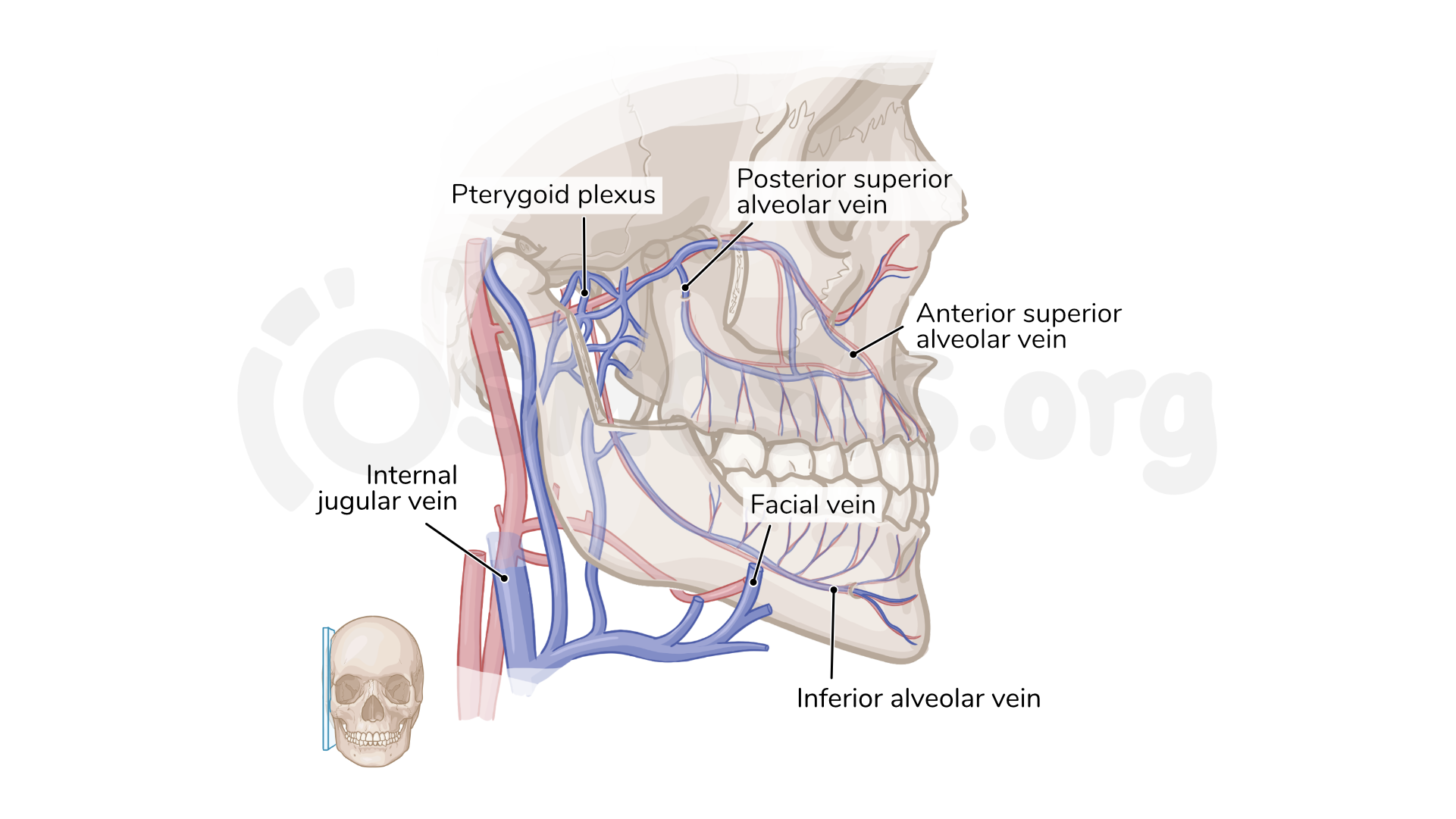 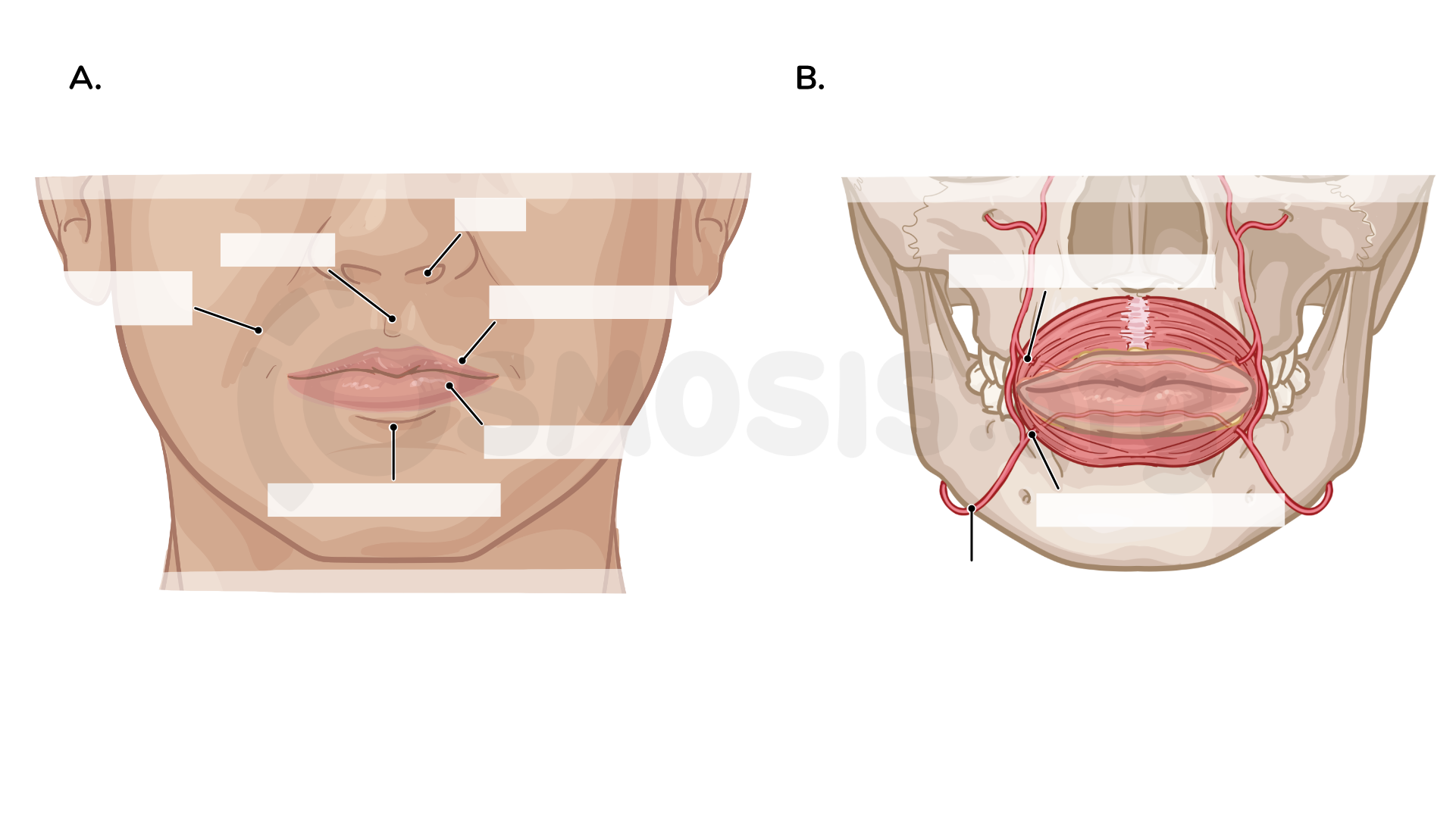 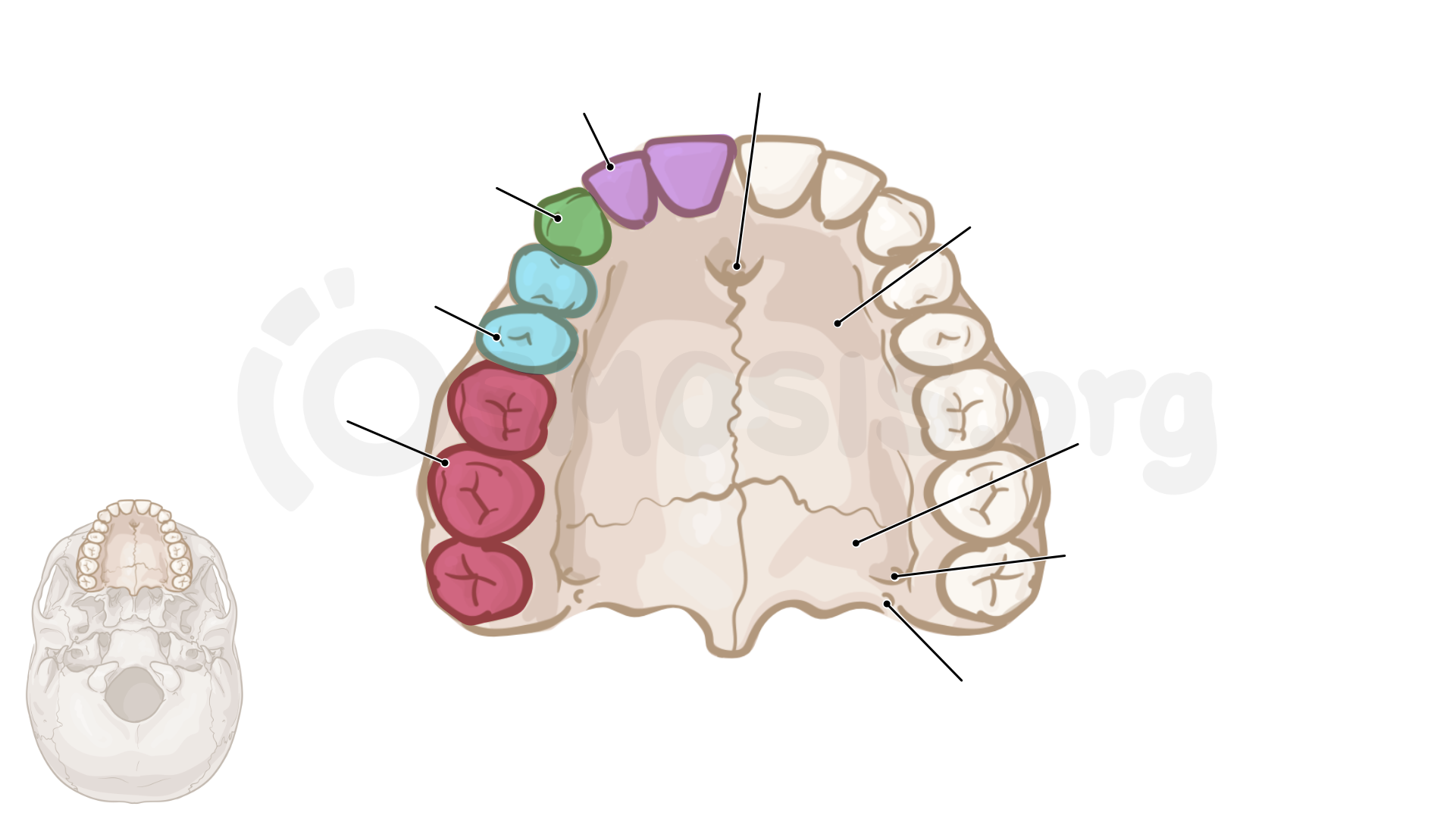 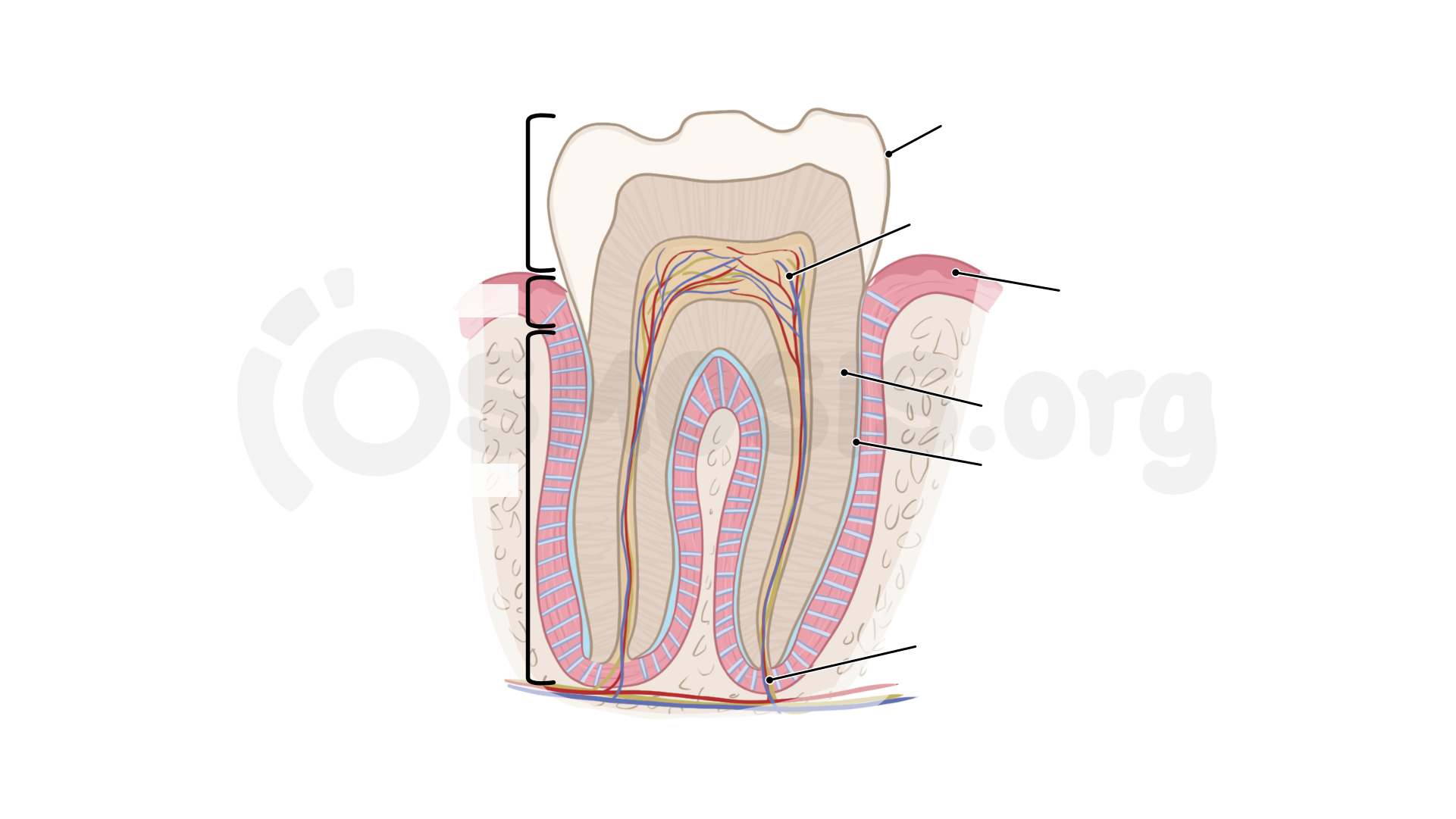 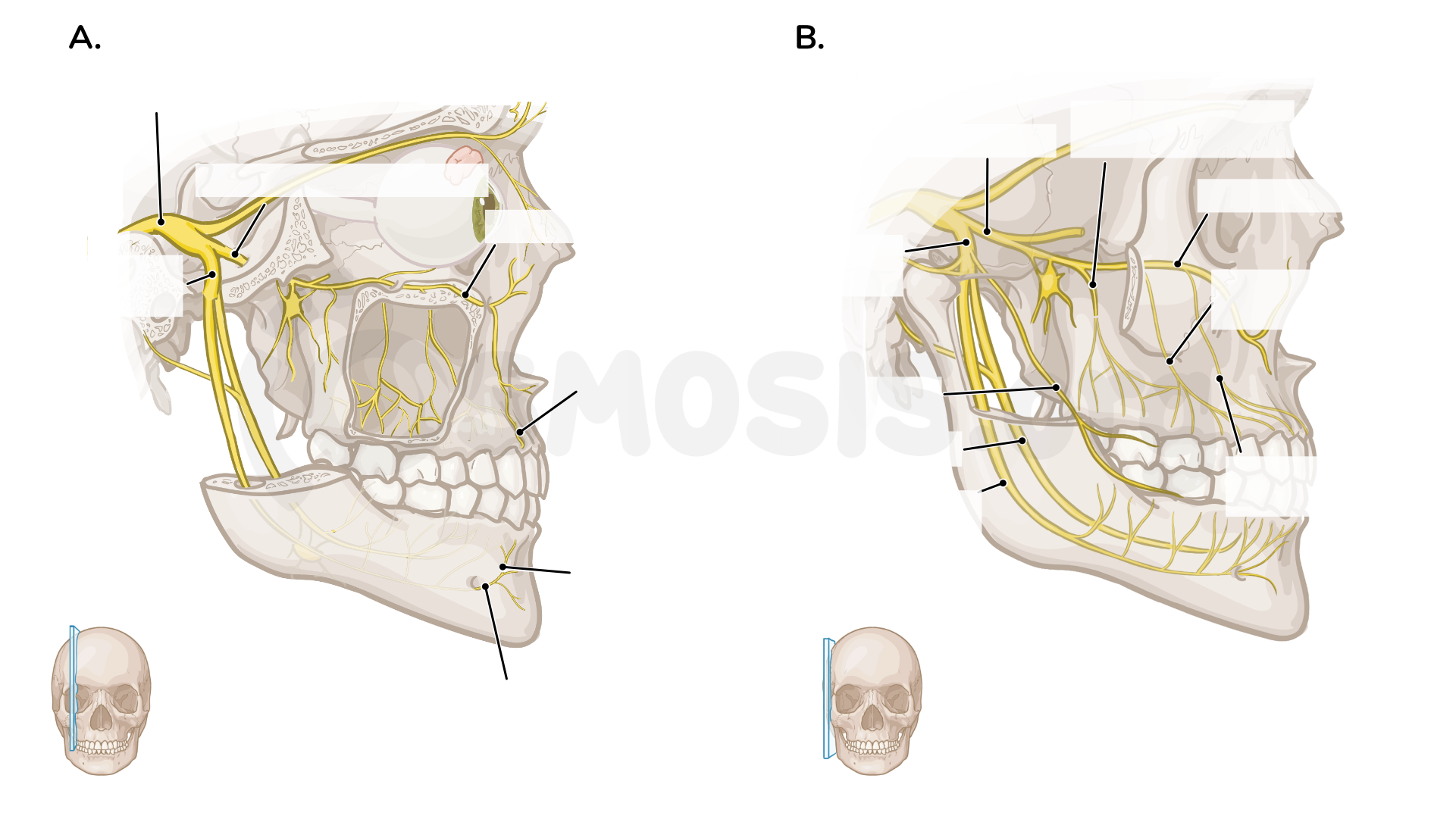 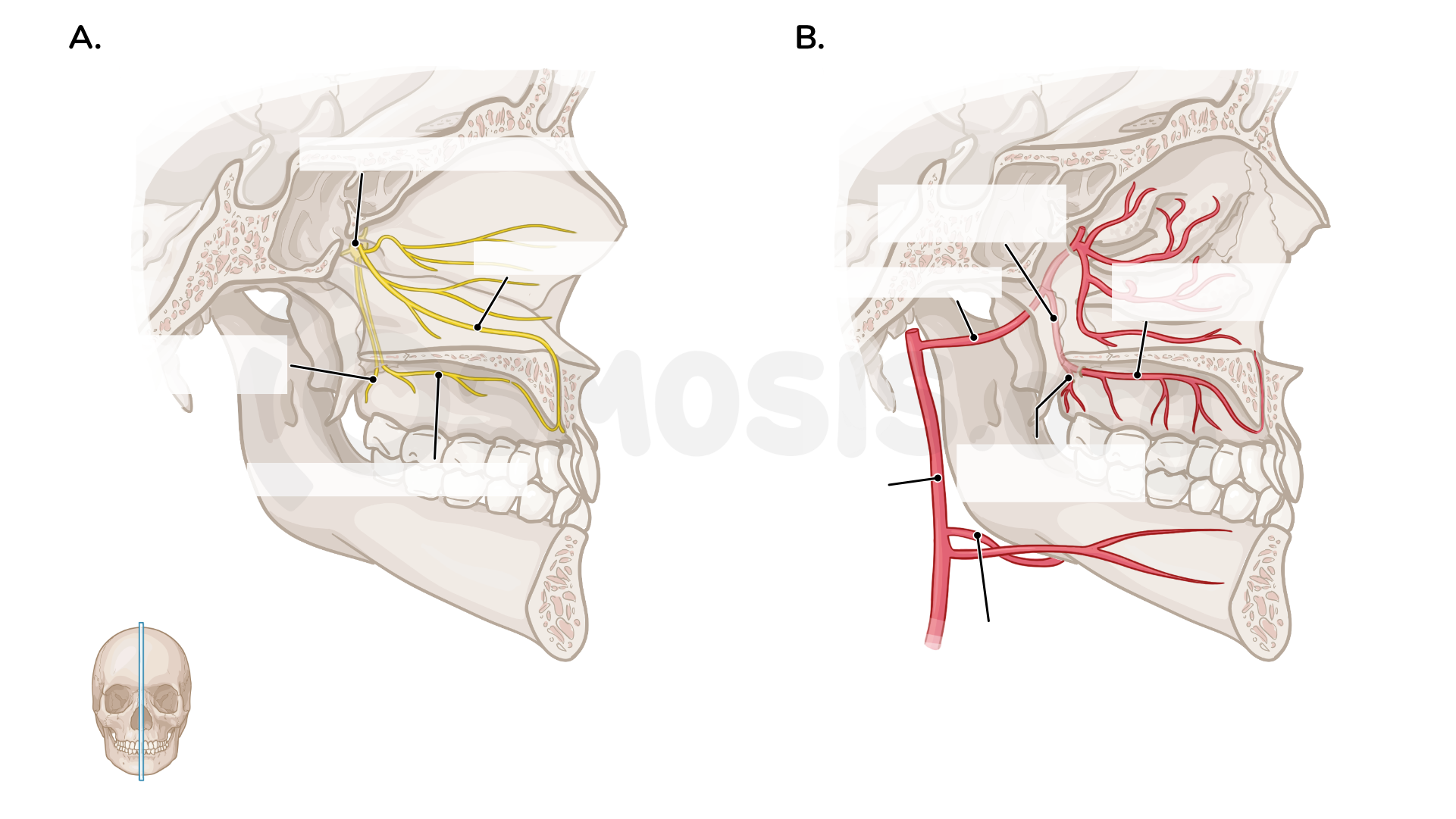 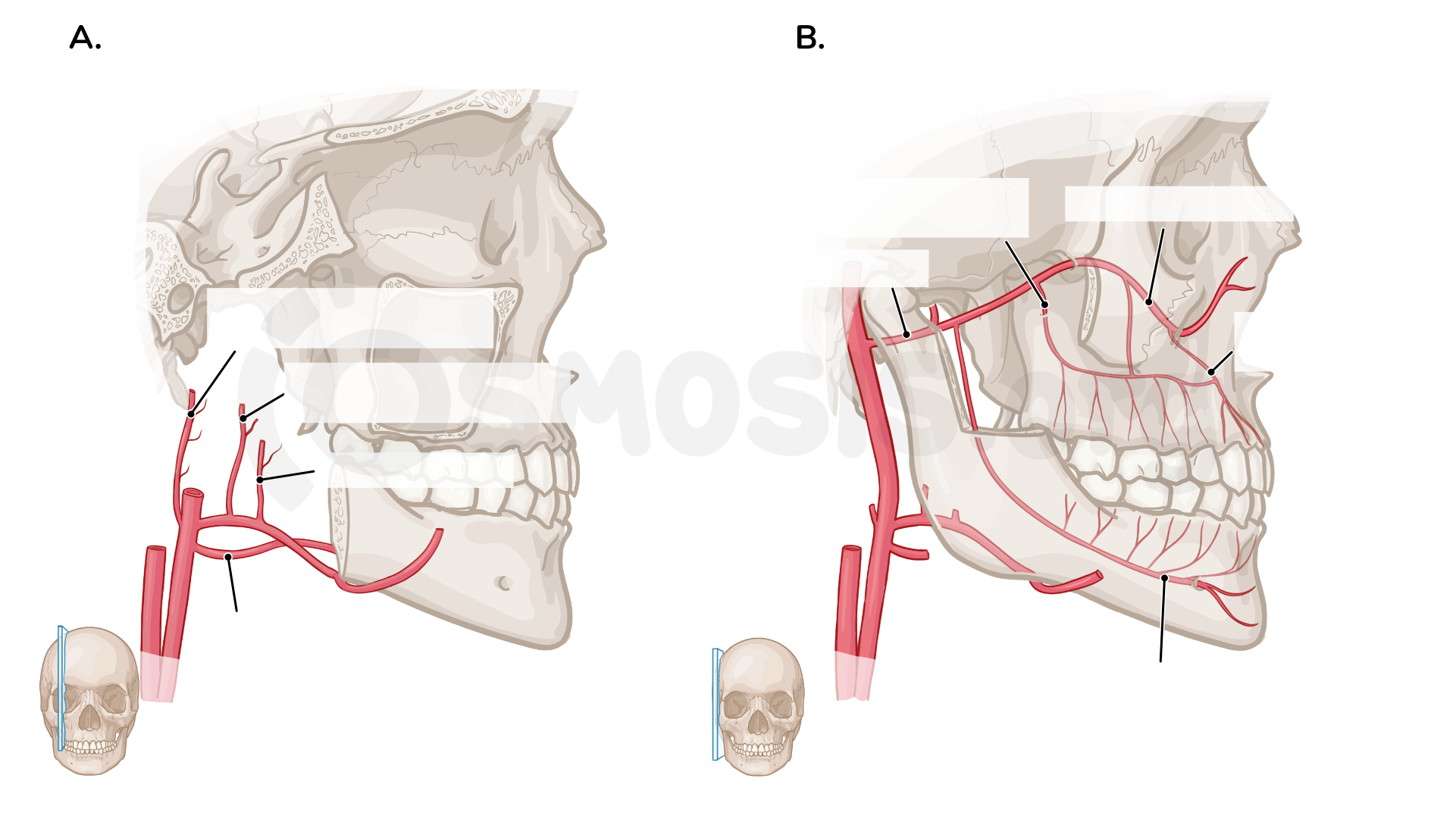 When you’re eating a slice of pizza, the first place food enters is the oral cavity and it is actually where digestion starts. Here, we get to taste the pizza and form a bolus of food to swallow for further digestion in the gut. Many structures work together to chew and swallow like the lips, teeth, and palate, so let’s explore them!

Now let’s get back to that slice of pizza. To eat it, first you open your mouth, and the opening through which the food enters is called the oral fissure.

Once the pizza’s inside the oral cavity, you use the lips, which act like valves, to keep the oral fissure closed and the food inside while you’re chewing. The lips, and the muscles within it, also help us exhale through the mouth, whistle, speak, or kiss.

Now, the lips extend from the nasolabial sulci and the nares to the mentolabial sulcus, which is just inferior to the lips, but not all of its surface looks the same.

The most remarkable feature is the part we’re actually used to calling “lips”: a thin, hairless, reddish skin, called the transitional zone, because it represents the transition between the skin of the face and the inner labial mucosa.

The vermillion border is the outer edge of our lips that marks the limit between the skin of the face and the transitional zone.

Finally, in the upper lip, is the philtrum which is a groove superior to the lips that extends from the midline of the vermilion border to the nasal septum.

Now, the lips get their blood supply mainly from branches of the external carotid arteries. Specifically, the facial artery gives the superior and inferior labial arteries which anastomose with one another in the midline.

Next up, are the gingivae, or gums, which are continuous with the inner side of the lips. They’re made up of connective tissue covered by mucosa, and they cover part of the teeth and the alveolar processes of the maxillary and mandibular bones.

Alright now, back to that slice of pizza. Once it is inside the mouth, the next step is to take a bite and start chewing. This is where the teeth come into play.

Now, besides cutting and chewing food, teeth are also important during speech, since there’s certain letters or phonetic sounds that are pronounced by pressing the tongue against the teeth, like the “T” sound for example.

Now, we don’t have only one set of teeth for all our life, we actually have two of them. The first set of 20 teeth we grow during the first years of childhood are called the primary, or deciduous teeth, since they eventually fall out. And the second set of 32 teeth we have as adults, are the secondary, or permanent teeth.

So, all these teeth help us turn that delicious pizza into a bolus of food. But not all of our teeth have the same features and functions.

On each side of an adult’s set of teeth there are: two incisor teeth, right next to the midline, which you would use to cut the pizza; one canine, used to tear the food; and two premolars and three molars, that you’d use to grind the food as you chew.

Each of these teeth is made of three parts: the crown, the root, and the neck. The crown is the part we see when people smile, the root is nailed within the tooth socket of the alveolar processes, and the neck is a small part between the crown and the root, covered with gingivae.

Now, the teeth are actually living tissue, so they need to be nourished and innervated just like any other anatomical structure.

So, inside each tooth, there is a pulp cavity, which houses the blood vessels and nerves, as well as connective tissue between them to fill the cavity.

At the tip of the root, there’s an opening, through which the vessels and nerves enter or exit the pulp cavity, called the apical foramen.

Cementum also works as the surface of articulation of the teeth with the tooth sockets, which are the individual cavities found in the alveolar processes of the maxilla and mandible.

Since they’re basically bony structures, the tooth sockets are covered with periosteum. Now, between the periosteum of the tooth socket and the cement of each tooth, there’s a tissue called the periodontium, or periodontal membrane, made mainly of collagen fibers.

The periodontium works like a ligament between the articular surfaces and makes this a very particular type of joint, unique in the human body, called a dento-alveolar syndesmosis, or gomphosis, where “gomphos-” means peg, referring to the way teeth are fastened into the tooth sockets.

Okay, now, both the teeth and gingiva get their arterial blood supply through branches of the maxillary arteries. The lower teeth and the corresponding gingiva facing the lips, called buccal gingiva, are supplied by inferior alveolar artery branches, directly from the maxillary artery.

The upper teeth and their corresponding buccal gingiva are supplied by the posterior and anterior superior alveolar arteries. The posterior branch arises directly from the maxillary artery and supplies the molar and premolar teeth.

The anterior branch originates from the infraorbital artery branch of the maxillary artery, and supplies the canine and incisor teeth.

They follow the same paths as the arteries but drain into the pterygoid plexus of veins, ultimately draining into the internal jugular vein. Some veins from the lower teeth may also drain into the facial vein.

Finally, lymph from the teeth and gingiva drain into the submandibular, submental, and deep cervical lymph nodes.

The palatal gingiva is innervated by another two branches of the maxillary nerve: the greater palatine and the nasopalatine nerves.

Now, the lower teeth and gingiva are innervated by branches of the mandibular nerve or Cranial Nerve V3. In the infratemporal fossa, this nerve branches into the inferior alveolar nerve, which innervates the lower teeth.

Alright now, before we move on, let’s take a quick pause to see if you can label the types of teeth labeled A, B, C and D, and their different parts from 1 to 3 in the following images.

Great! Now let’s switch gears and look at the palate, which makes up both the roof of the mouth and the floor of the nasal cavity.

It’s made up of the hard and the soft palate, both lined with oral mucosa on their inferior surface. This mucosa is tightly packed with palatine glands, which secrete mucus.

The fauces are bounded by the soft palate superiorly, the tongue inferiorly, the palatoglossal arches anteriorly and the palatopharyngeal arches posteriorly.