Anatomy of the pelvic girdle 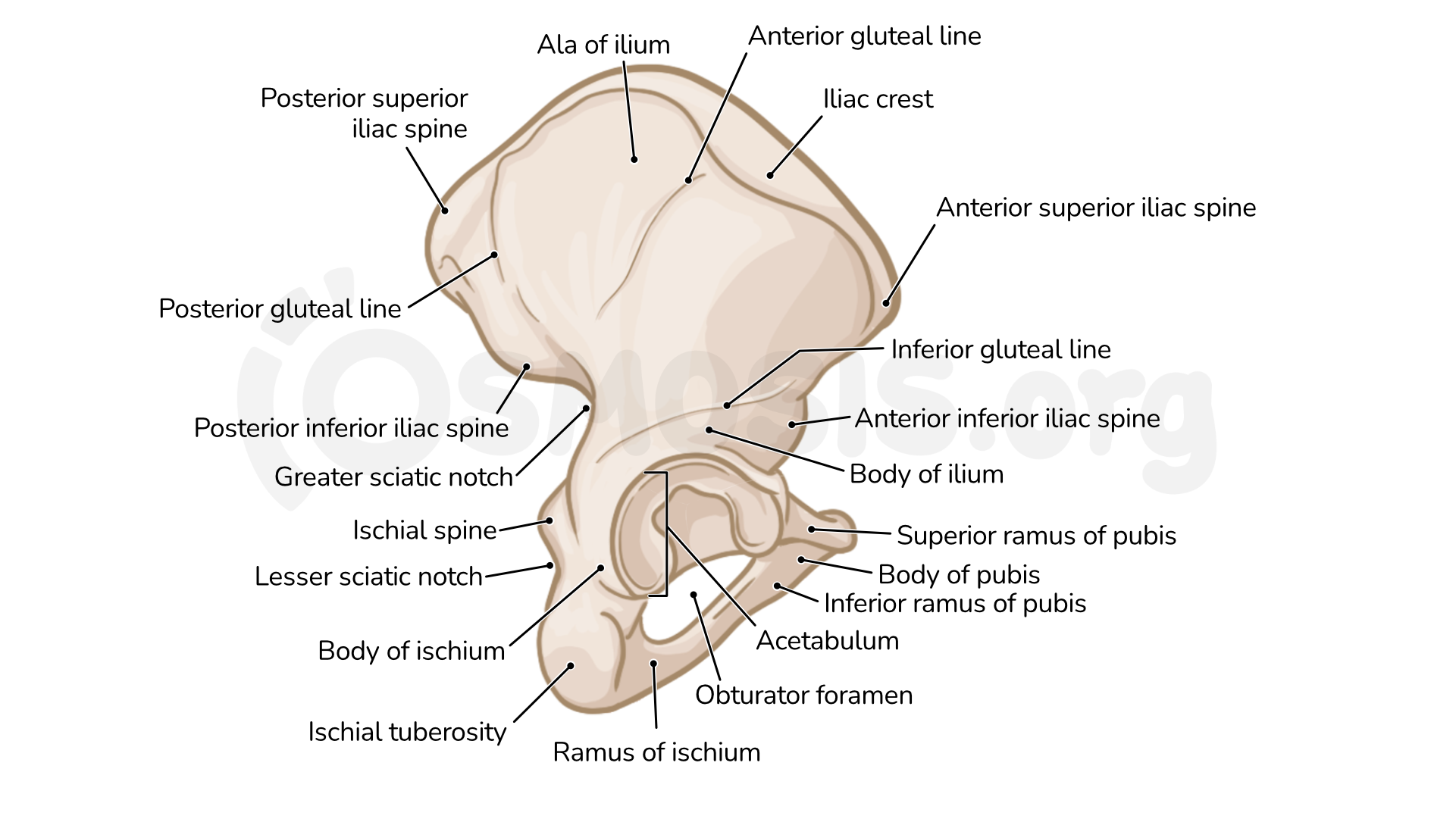 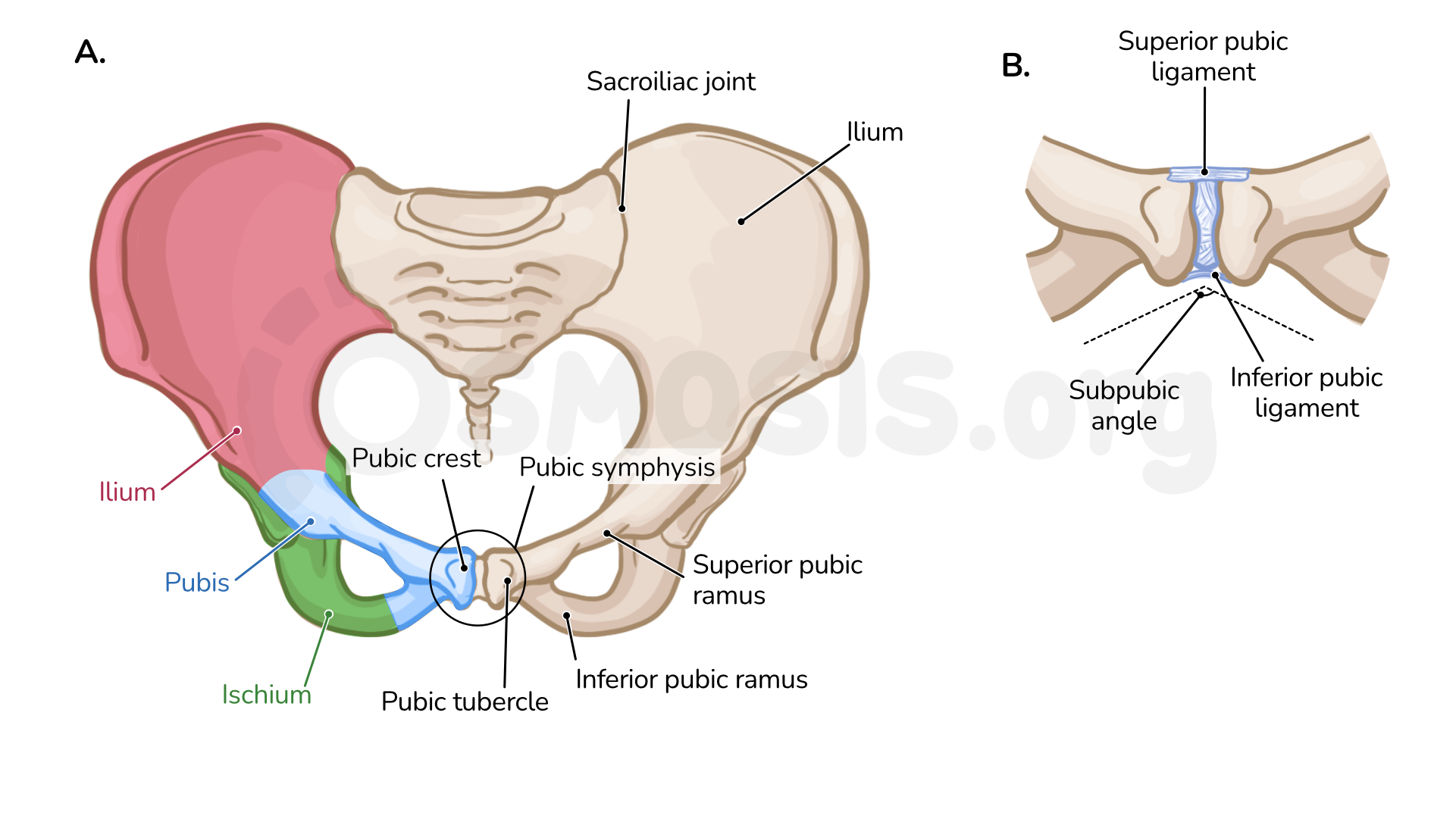 Figure 2. A. Anterior view of the pelvic girdle and B. the pubic symphysis. 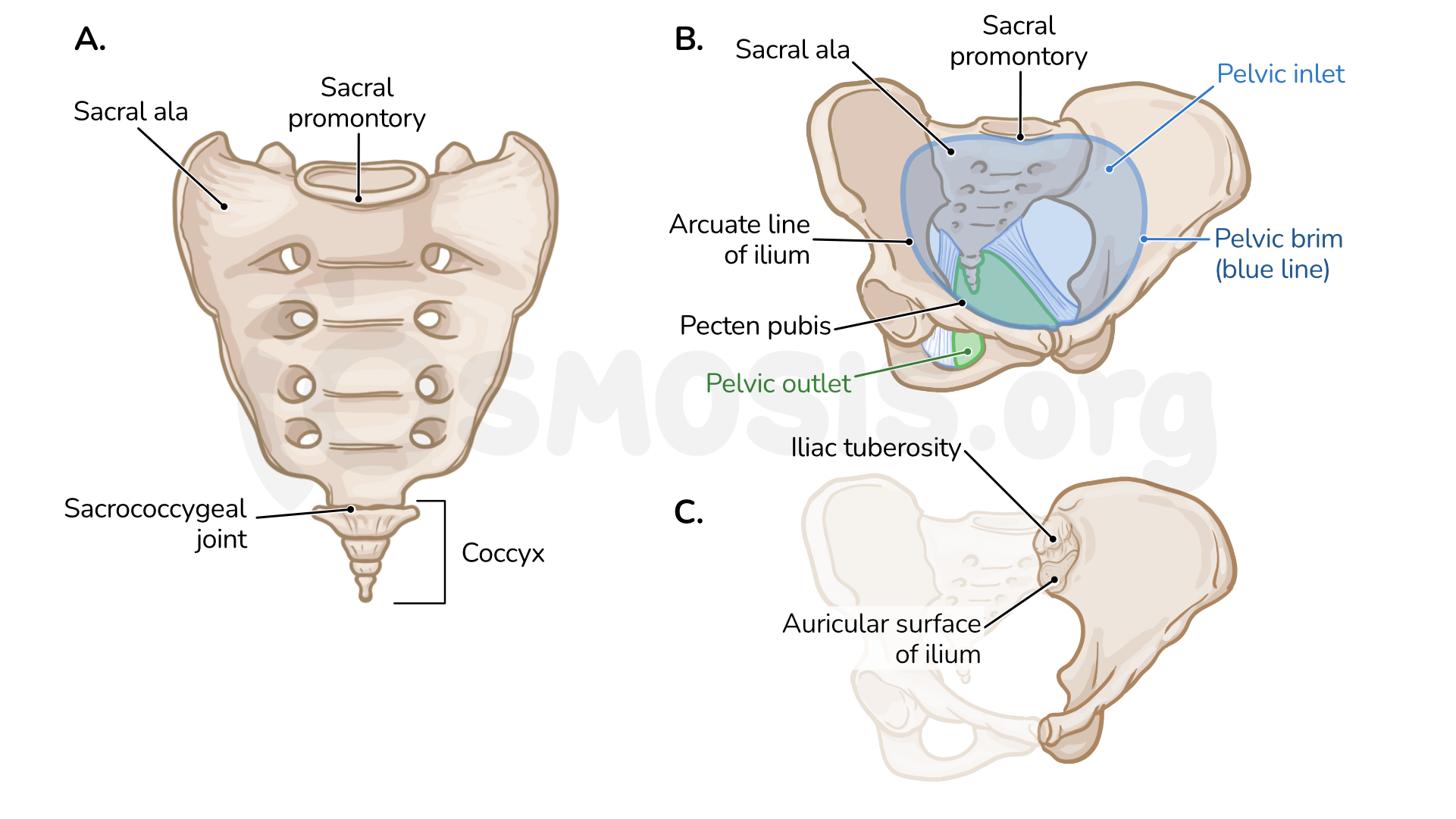 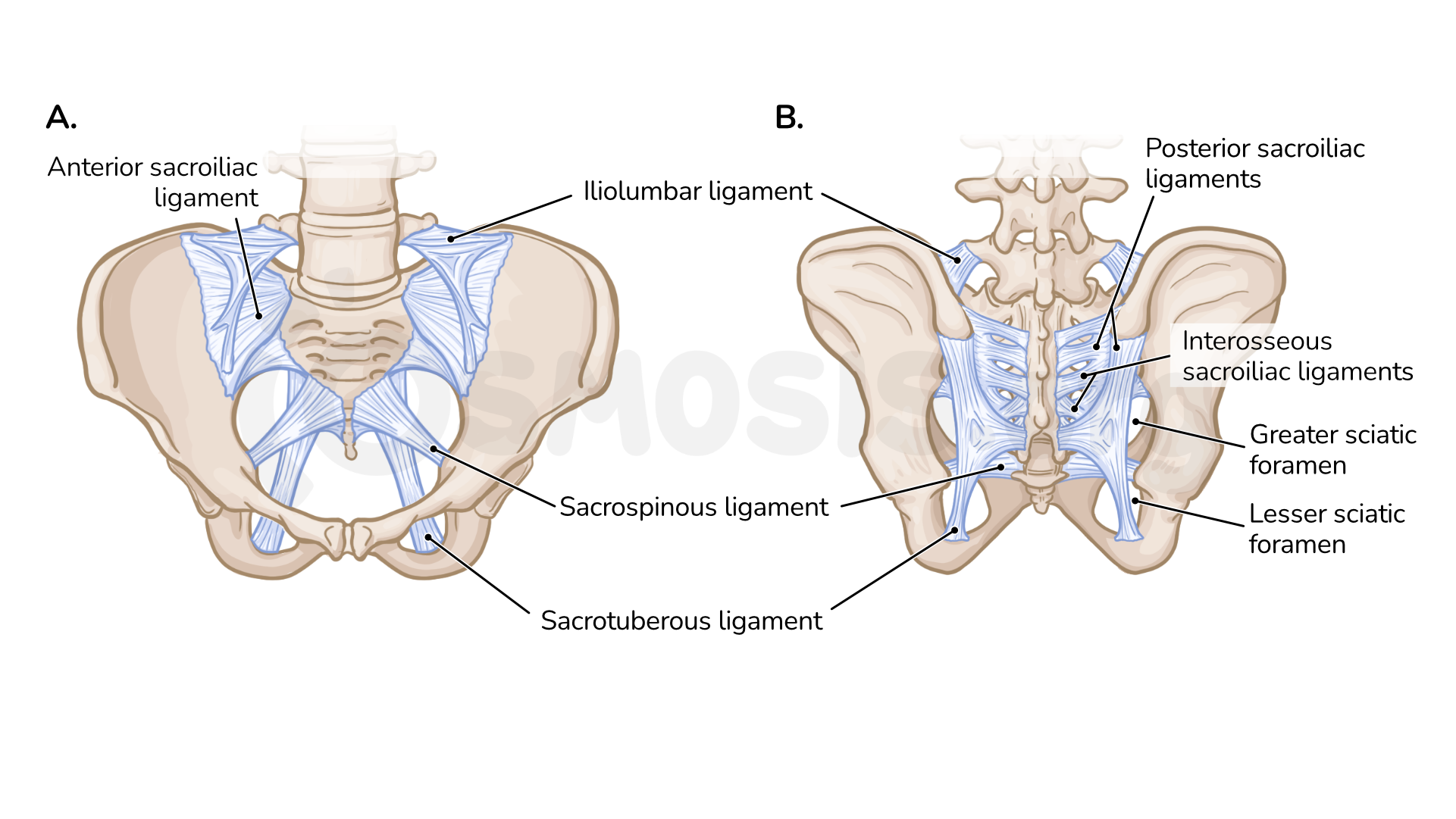 Figure 4. A. Anterior and B. posterior view of the ligaments of the pelvic girdle. 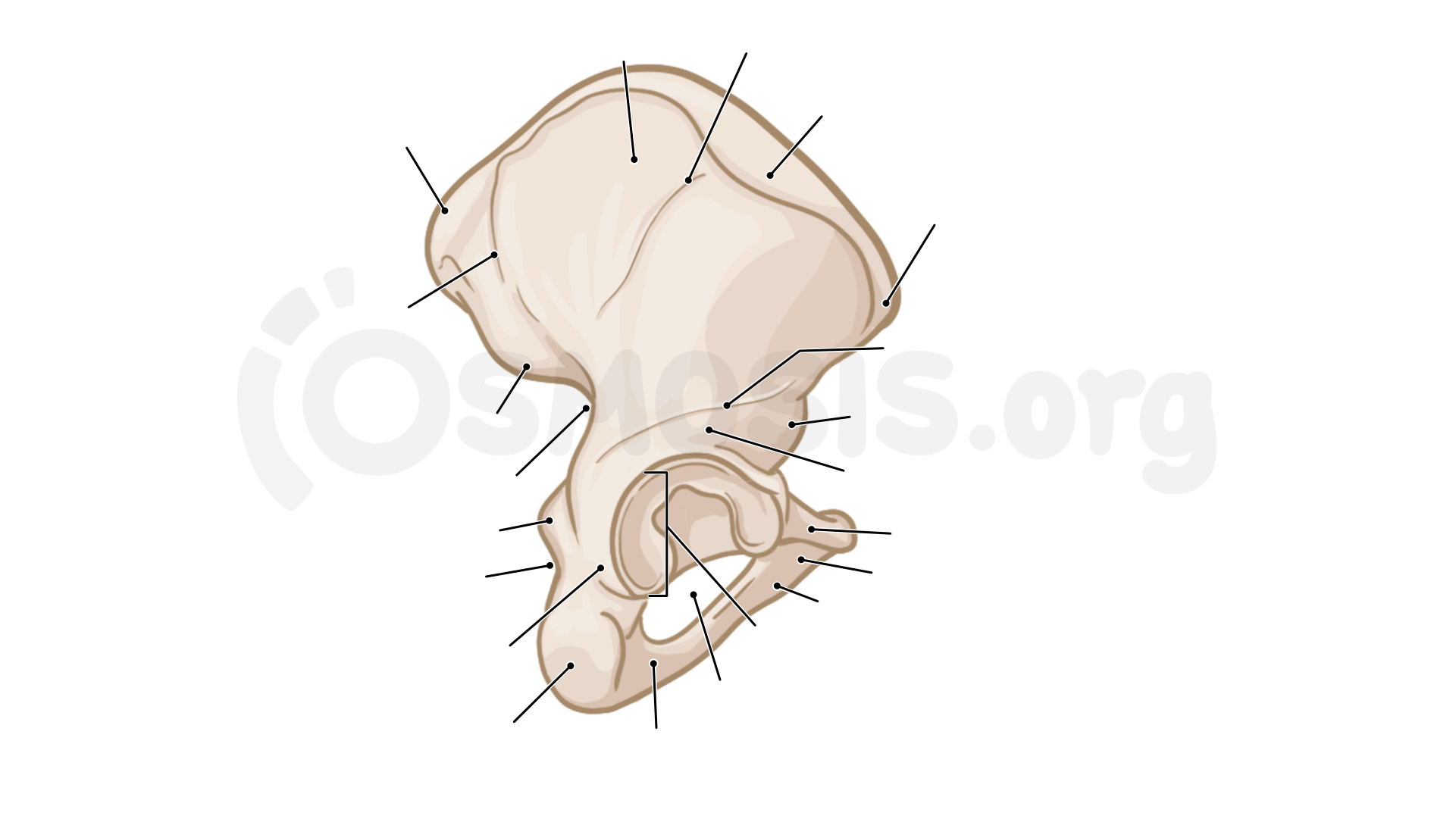 The pelvic girdle or the bony pelvis is a bony ring, formed by the left and right hip bones and the sacrum, and it surrounds the pelvic cavity, and connects the vertebral column to the lower limbs.

The main functions of the pelvic girdle are to transfer the weight of the upper body to the lower limbs when sitting or standing, and provide attachment points for muscles that help with locomotion and posture.

It also provides support and protection for the abdominopelvic structures. So let’s start with the hip bones.

The right and left hip bones are irregular shaped bones located at the sides of the pelvic cavity, which bound and form the lateral walls of the pelvis.

Each one of these hip bones develop from the fusion of three bones, the ilium, ischium, and pubis. Now, let’s start with the upper part of the hip bone, the ilium. You can think of the ilium as a fan.

Now, there are 4 bumps coming off the ilium called spines. Let’s talk about them!

If we look anteriorly to the ilium, we can see two of the spines. One of them is superior and the other one is inferior. The naming is easy because it follows the rule of (Anterior or Posterior) + (Superior or Inferior).

Now, looking at the ilium from a posterior view, we can see the remaining two spines, one superior and again, one inferior. If we follow the rule just mentioned, we can name them easily.

The main function of the spines is to provide attachment points for various muscles. For example, the longest muscle in the body is called the sartorius, and it attaches to the anterior superior iliac spine.

Right and left auricular surfaces of both ilia articulate with the sacrum, forming two sacroiliac joints.

Above the auricular surface, there’s an even rougher bit of bone called the iliac tuberosity, which has synovial and syndesmotic articulation with the reciprocal surface of the sacrum.

These muscles originate from lines on the gluteal surface of the ilium called posterior, anterior, and inferior gluteal lines.

Finally, the posterior gluteal line forms part of the origin of the gluteus maximus, which is the largest of the gluteal muscles.

Moving on to the next part of the hip bone, the ischium. The ischium has two main parts, a body and a ramus.

The body is the superior expanded part of the ischium that connects to the ilium superiorly and to the pubis anteriorly, and helps to form the acetabulum.

The ramus is the lower, narrow part of the ischium that connects anteriorly to the lower part of the pubis, and helps form part of the obturator foramen.

On the infero-posterior part of the ischium, there’s a large, roughened area called the ischial tuberosity which supports our weight while sitting, and where the inferior gemellus muscle and the hamstrings attach.

At the junction of the body and ramus there’s a pointed projection called the ischial spine where the sacrospinous ligament and superior gemellus muscle originate.

Alright, now let’s move on to the third and final part of the hip bone, the pubis. The pubis has three parts: a body, superior ramus, and inferior ramus.

The inferior pubic ramus connects to the inferior ramus of the ischium, forming the ischiopubic ramus. The angle at which both of these converge is called the pubic arch.

Next is the pubic crest, which is a thickening on the anterior part of the pubis where the abdominal muscles attach.

It has a swelling on its lateral side called the pubic tubercle, which is the distal attachment point of the inguinal ligament.

The pectineal line or pecten pubis is an oblique ridge located on the lateral part of the superior pubic ramus, and it’s where the pectineus muscle originates from.

Anteriorly, the bodies of the right and left pubic bones are joined together in the median plane through a fibrocartilage called the inter-pubic disc. This connection forms a joint called the pubic symphysis.

When the bodies of the two pubic bones meet, they form an angle inferiorly called the sub pubic angle.

The pubic symphysis is important in stabilizing the pelvic girdle and transferring weight from the upper body to the lower body, and it undergoes important changes during childbirth, to allow the fetus to pass through the birth canal.

Now, looking at the hip bone from a lateral view, we can see a deep, cup-shaped fossa called the acetabulum. This fossa is formed by the body of the ilium, the body of the ischium, and the superior ramus of the pubis.

The head of the femur fits into this fossa, forming the hip joint. And right below the acetabulum, there’s the obturator foramen.

The small part of the obturator foramen that is not covered by the membrane is called the obturator canal, through which the obturator nerve and obturator blood vessels pass to supply structures in the medial compartment of the thigh.

Now let’s take a quick break! Pause the video and see if you can recall some of the most important features of the ilium, ischium and pubis!

Alright, now let’s switch gears and talk about the sacrum.

The sacrum is a wedge-shaped bone composed of five fused sacral vertebrae. The sacrum forms the posterosuperior wall of the pelvic cavity, and it has a superior base and an inferior apex.