Assessments
Anatomy of the temporomandibular joint and muscles of mastication 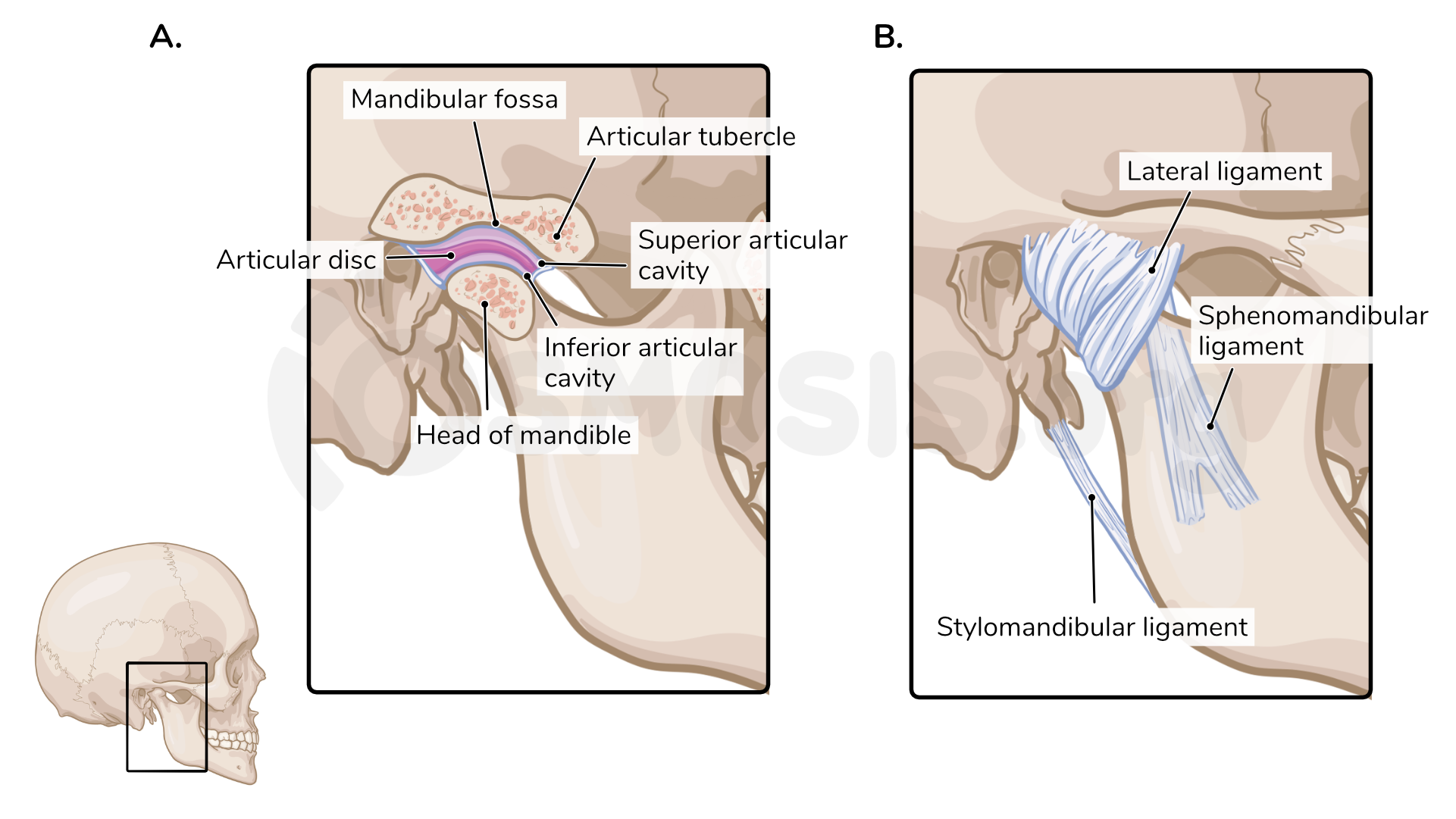 Figure 1. A Lateral view of temporomandibular joint and B ligaments. 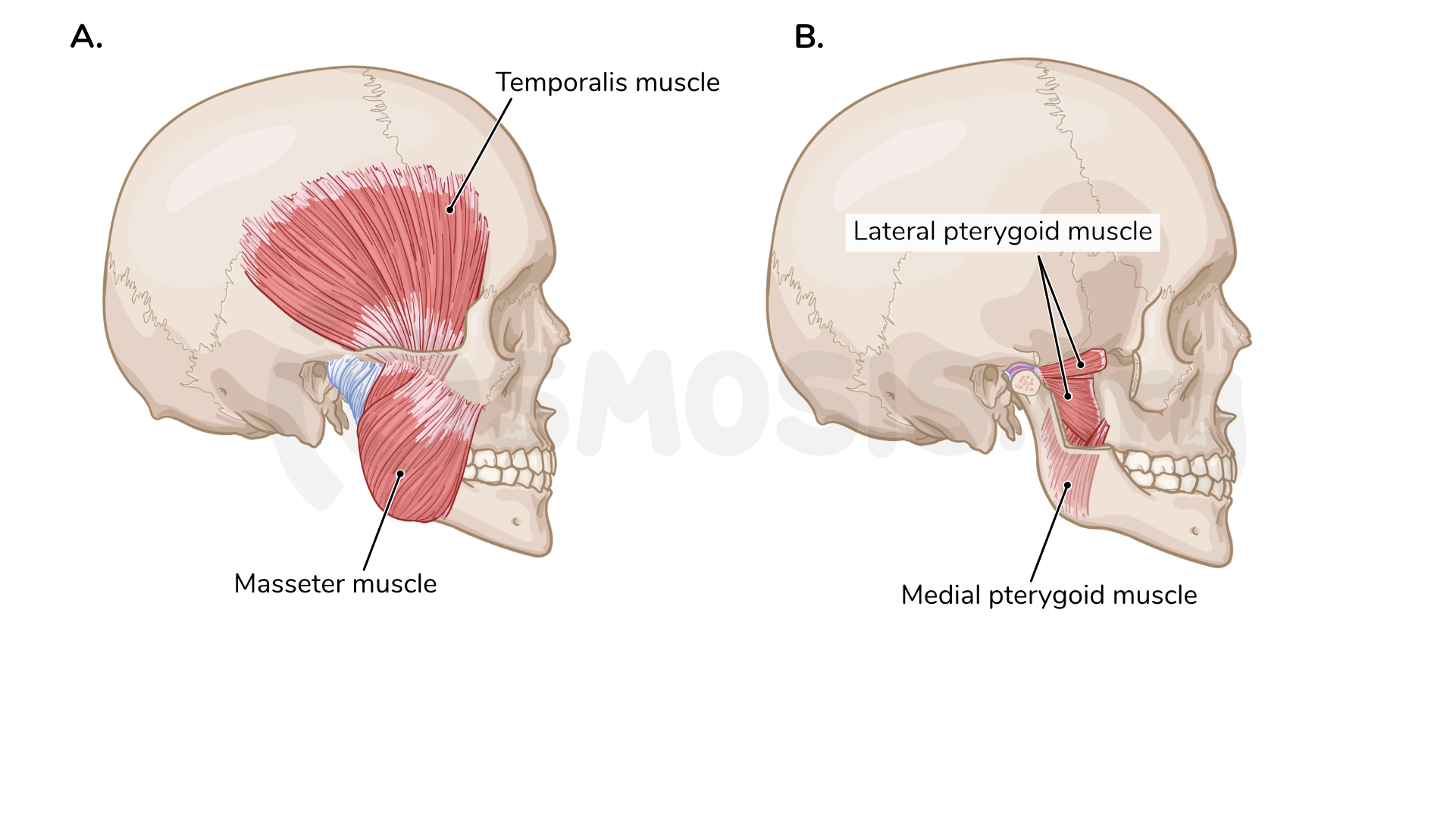 Figure 2. Lateral view of A superficial and B deep muscles of mastication. 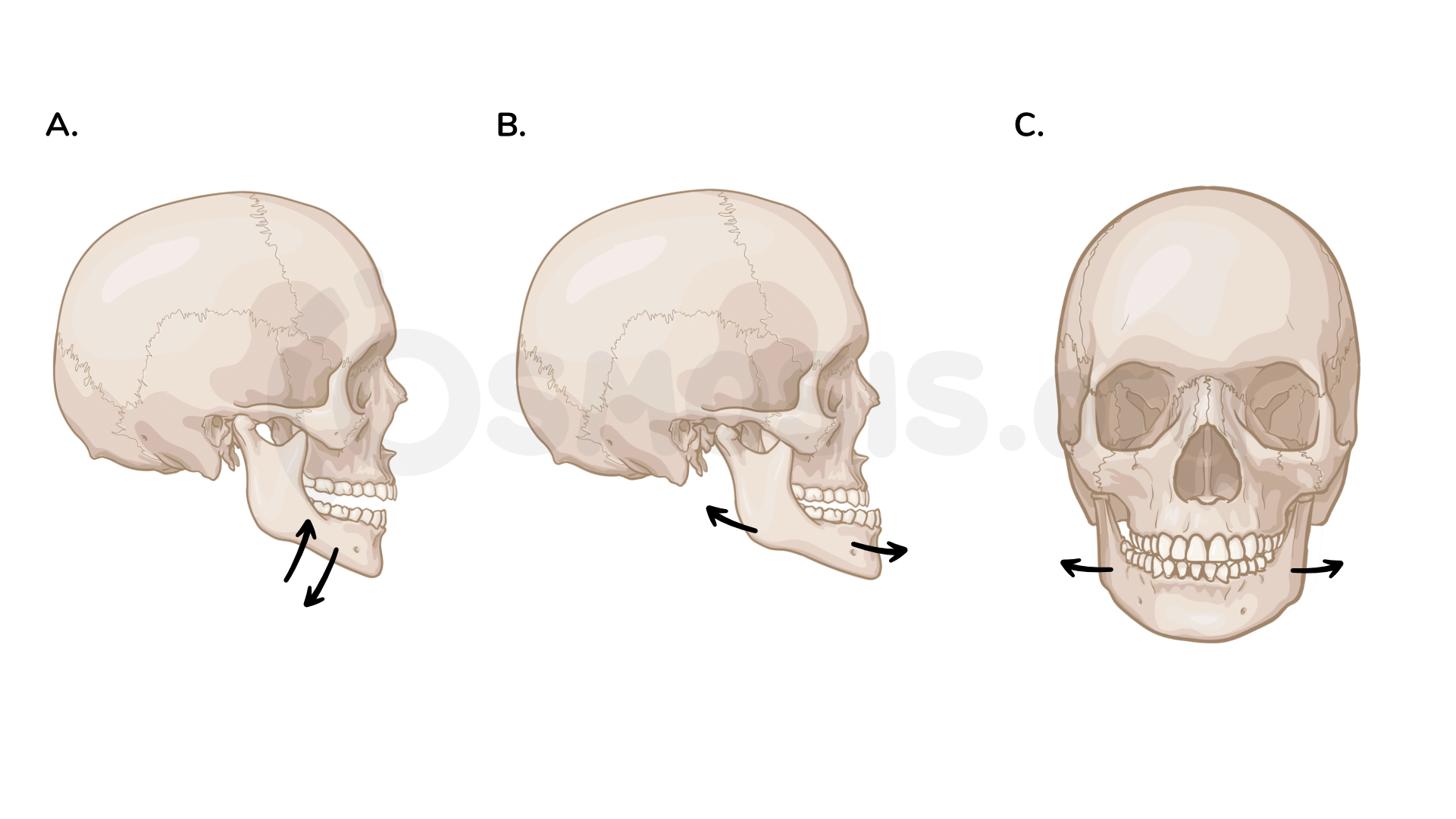 Figure 3. A Hinge movements, B gliding movements, and C lateral movements of the jaw. 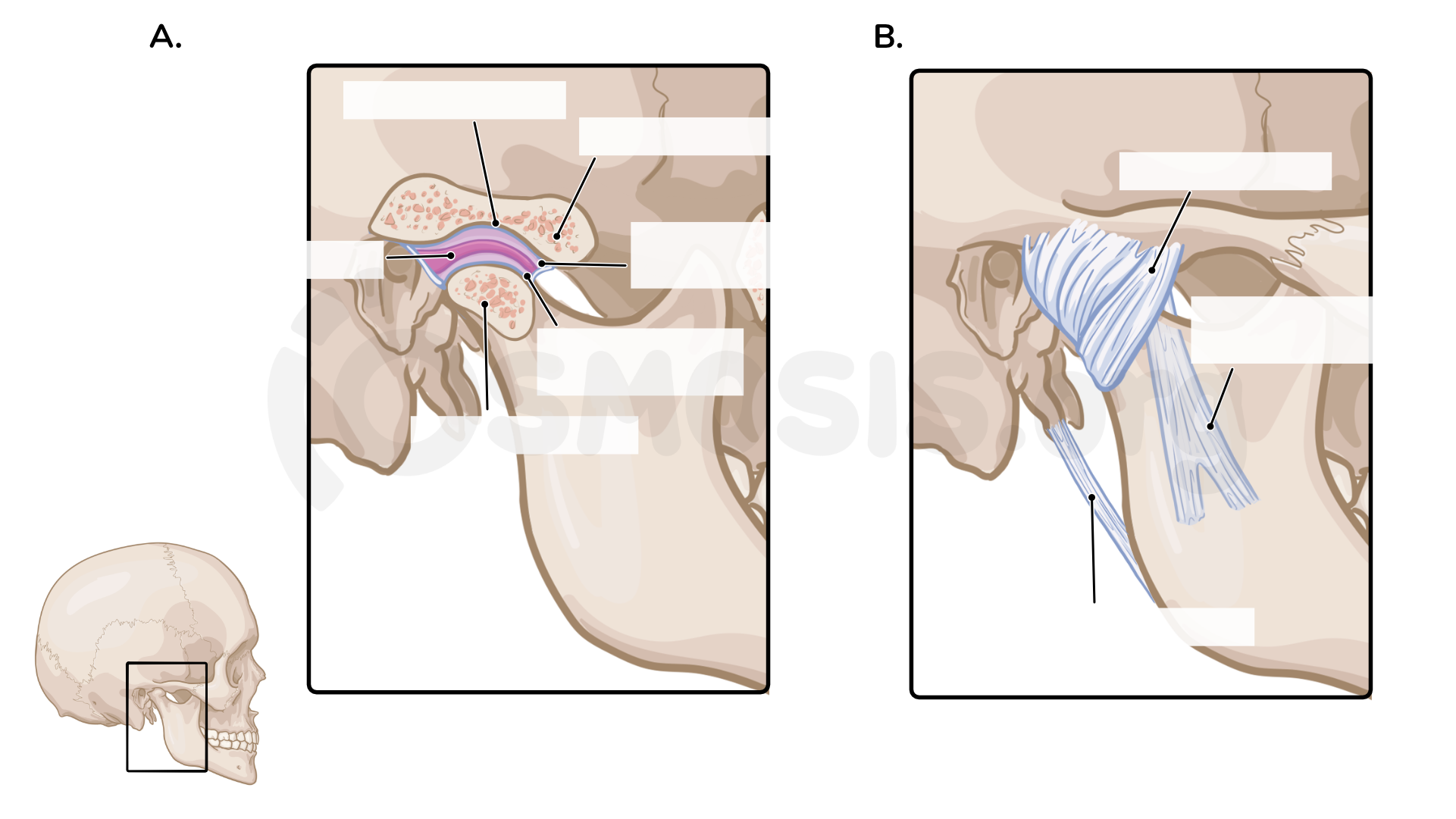 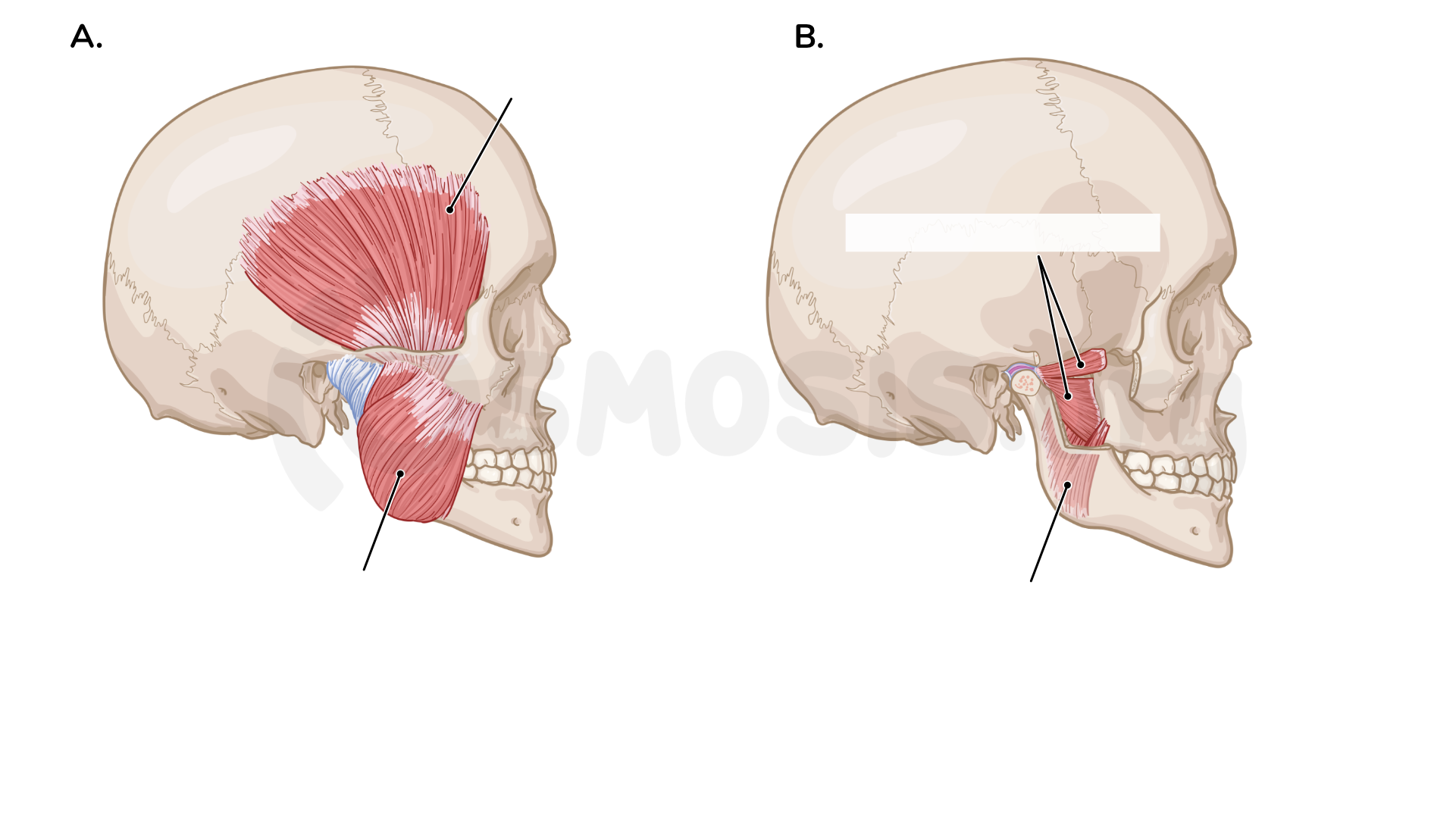 A 17-year-old patient comes to the emergency department with severe jaw pain after a hard tackle during a football game. Their jaw is locked in an open position, and they are unable to close it. Excessive contraction of what muscle of mastication is most directly responsible for the position of this patient’s jaw? Anatomy of the temporomandibular joint and muscles of mastication

Getting into medical school must have been a jaw-dropping moment, but have you ever wondered how it is that your jaw didn’t fall off? You can thank the temporomandibular joint for that!

Now, the temporomandibular joint is a modified synovial hinge joint. So first, just like a hinge joint, it allows for flexion and extension, which translate to elevation…….and depression of the jaw, respectively. Additionally, the TMJ also allows for gliding and rotation.

Unlike your average hinge joint, the articular surfaces don’t make direct contact here. They are separated by an articular disc, which is attached to the inner surface of the joint's fibrous capsule.

With all of these movements at the temporomandibular joint, there needs to be strong surrounding support so it doesn’t become dislocated.

This is where ligaments come in handy. The temporomandibular joint is enveloped by the joint capsule and strengthened by one intrinsic and two extrinsic ligaments.

The intrinsic ligament, called the lateral ligament, is a thickening of the joint capsule and extends from the articular tubercle to the neck of the mandible.

The sphenomandibular ligament extends from the spine of the sphenoid bone to the lingula of the mandible. It supports the joint and serves as a prop during hinge movements.

The stylomandibular ligament extends from the styloid process of the temporal bone to the angle of the mandible. It strengthens the joint, but not as much as other ligaments.

Now, the joint can’t move on its own - it needs muscles, specifically the muscles of mastication, which are all innervated by branches of the mandibular division of the trigeminal nerve, also known as the mandibular nerve.

It is innervated by deep temporal nerves. The temporalis elevates the mandible and its posterior fibers, which are more horizontal, retrude the mandible.

The next muscle is called the masseter, and it’s a strong muscle that originates on the zygomatic arch and the maxillary process of the zygomatic bone.

It inserts on the angle and the lateral surface of the ramus of the mandible. The masseter mainly elevates the mandible, but superficial fibers contribute to protrusion and it’s innervated by the masseteric nerve.

The third muscle of mastication, called the medial pterygoid muscle, is made of two heads: the deep head and the superficial head.

The deep head originates from the medial surface of the lateral pterygoid plate and the pyramidal process of the palatine bone.

The superficial head originates from the tuberosity of the maxilla. Both heads insert on the medial surface of the ramus and angle of the mandible.

The medial pterygoid muscle is innervated by the medial pterygoid nerve. Bilaterally, it acts very similarly to masseter, producing elevation and protrusion of the mandible. When alternate unilateral contraction occurs it also produces small side-to-side grinding movements of the jaw.