Urinary Organs of the Pelvis Figure 1. Blood supply and innervation of the urinary organs. Anterior views of a A. biologically male and B. biologically female pelvis. Figure 2.  Blood supply and lymphatic drainage of the bladder and pelvic ureters. Anterolateral view of a A. biologically male and B. biologically female pelvis. Figure 3. Urinary organs and peritoneal reflections in the pelvis. Sagittal view of the A. biologically male and B. biologically female pelvis. 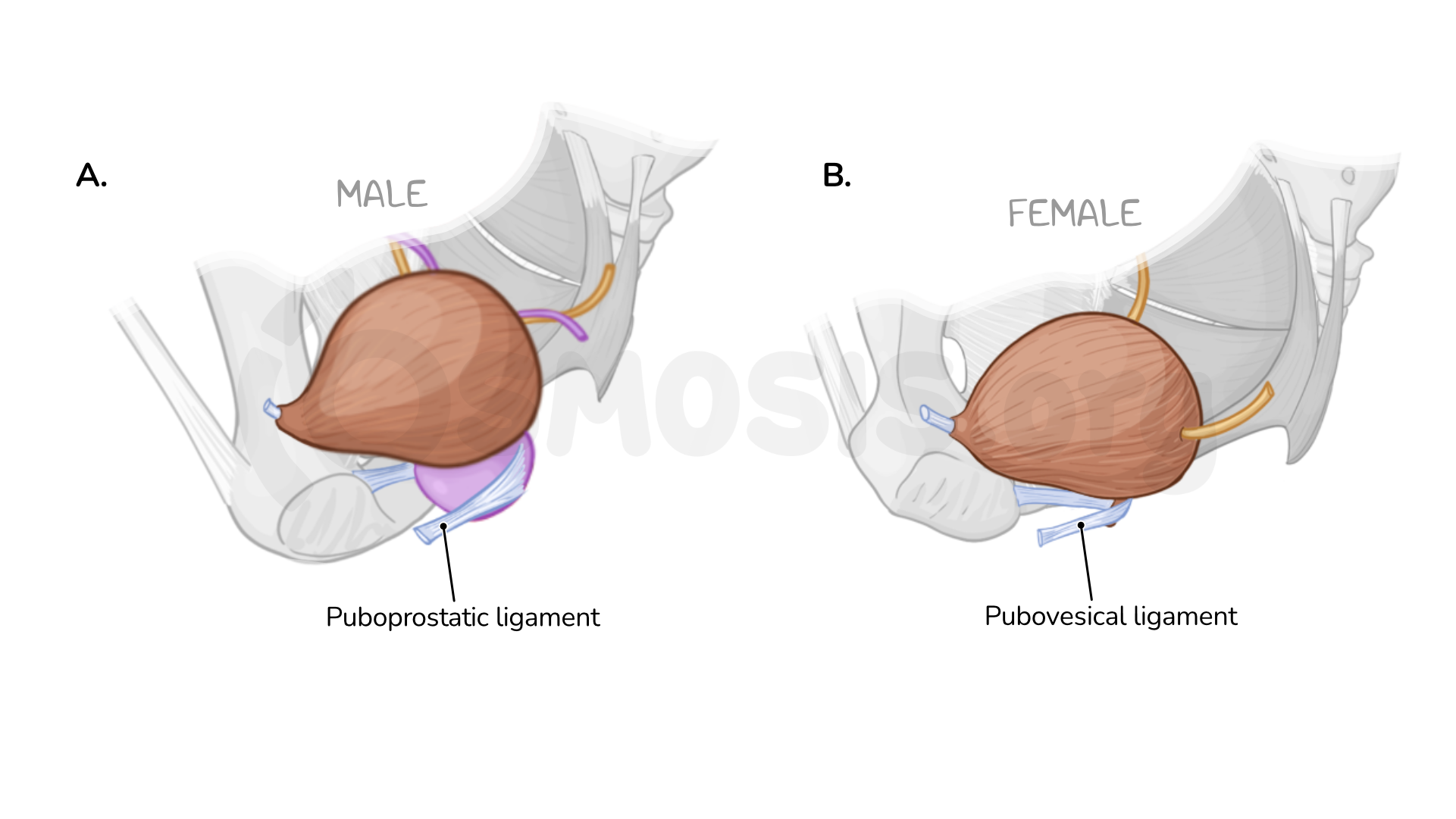 Figure 5.  Anterior view of coronal section of the bladder and urethra in A. biological males (and close-up of the prostatic urethra) and B. biological females. 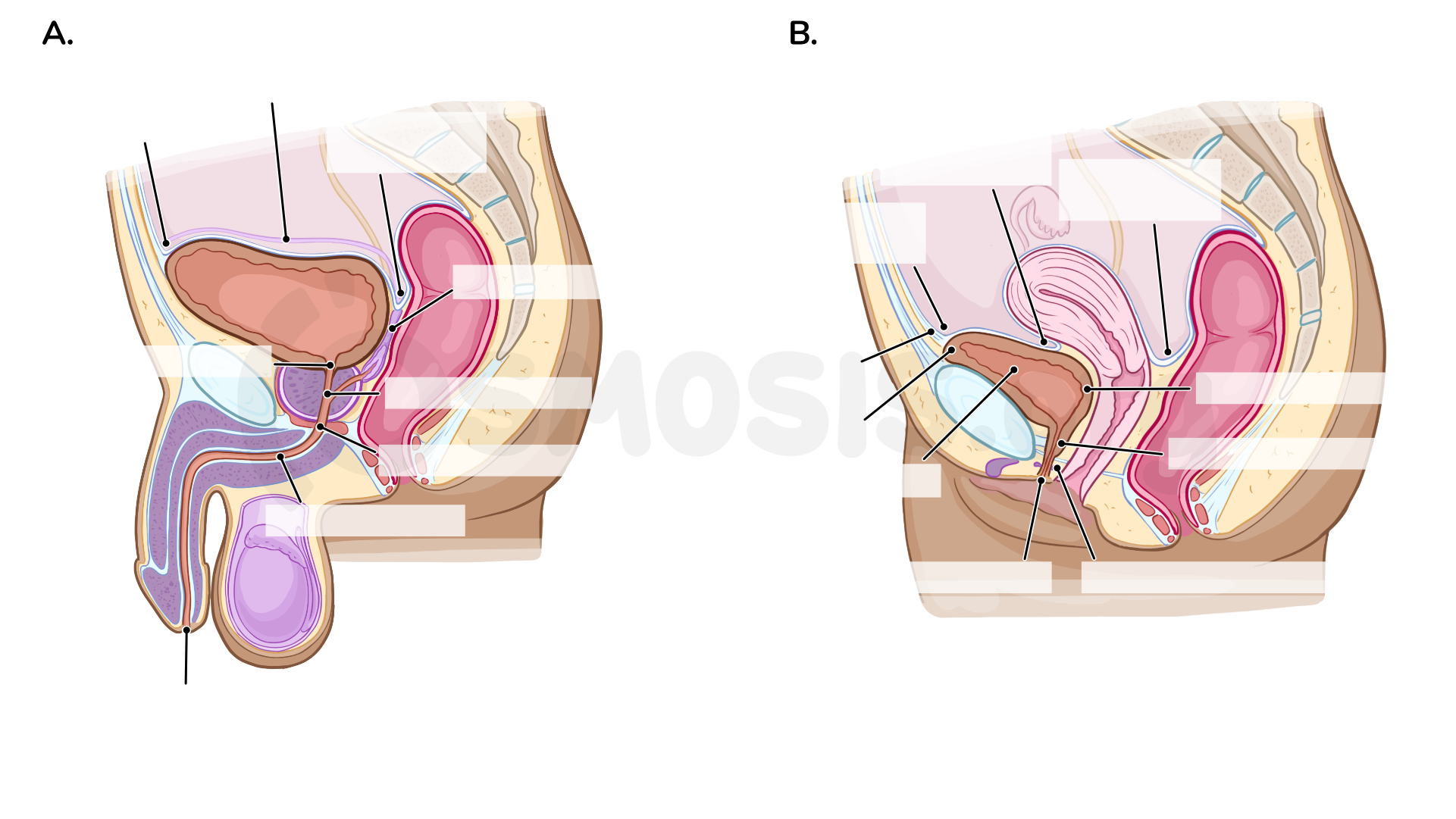 Urine good hands here at Osmosis, because we care about each other and our learners! Bad puns aside, urine is an important way for us to eliminate waste and it takes quite the journey from the kidneys to the outside world! Let’s look at the path of urine after it leaves the kidneys, and the structures it passes through along its journey.

After exiting the kidney, urine travels through 3 main structures before leaving the body; the ureters, the urinary bladder and the urethra.

Let’s start with the ureters, which are paired muscular tubes sitting retroperitoneally that transport urine from the kidneys to the urinary bladder. The ureters are roughly 30 centimeters long, and have two parts; an upper abdominal part and a lower pelvic part.

The abdominal part starts at the kidneys, and descends in the abdomen posterior to the peritoneum to reach the pelvic brim. Here, the ureters cross near the bifurcation of the common iliac arteries - where the external and internal iliac arteries begin - and are now referred to as the pelvic ureters.

As the bladder fills with urine, the internal pressure increases, which compresses the part of the ureter that’s embedded in the bladder wall. Also, during micturition, which is a fancy way to say “when peeing”, the bladder wall contracts, closing off the lumens of the ureters where they enter the bladder in a sphincter like fashion, clamping them shut to also prevent reflux of urine into the ureters.

Okay, now the arterial blood supply of the ureters is segmental, meaning that each segment receives blood from different arteries. Within the pelvis, the pelvic ureters are supplied by branches from the internal iliac artery such as the superior vesical artery, while the terminal parts of the ureters are supplied by the inferior vesical arteries in males and the vaginal and uterine arteries in females.

Venous blood from the ureters is drained by veins that follow the arteries, and lymphatic vessels carry the lymph to the common iliac and internal iliac lymph nodes.

Finally, the ureters are innervated by nearby autonomic nerve plexuses, including the renal, aortic, and the superior and inferior hypogastric plexuses. The ureters lie above the pelvic pain line, meaning that afferent pain fibers travel with sympathetic nerves to the T10 to L2 spinal segments.

In males, the bladder is anterior to the rectum and superior to the prostate, and in females, its posterior surface rests on the anterior vaginal wall. In adults, an empty bladder lies in the lesser pelvis, posterior and slightly superior to the pubic bones. Now, as the bladder fills with urine, it extends superiorly and ascends into the greater pelvis. In some individuals, a full bladder may even reach the level of the umbilicus.

Before we learn more about the bladder, let’s first look at some of the surrounding structures and how the parietal peritoneum creates folds around the bladder. If you recall, the abdominal cavity is lined by parietal peritoneum, which extends inferiorly into the pelvis and reflects over some pelvic viscera, such as the urinary bladder. These reflections form peritoneal folds that vary between males and females.

Then, the peritoneum continues over the superior surface of the bladder, and extends laterally to cover the lateral walls of the pelvic cavity. This creates a space on each side of the bladder, called the paravesical fossa. To remember this, “para-” means beside and “vesical” means bladder, so these fossae are beside the bladder!

The peritoneum continues posteriorly to cover the posterior wall of the urinary bladder. Here, the peritoneum crosses the distal parts of the ureters and the ductus deferens on each side, creating paired peritoneal folds called the ureteric folds.

This pouch extends laterally and posteriorly, forming a fossa on each side of the rectum, called the pararectal fossa. Finally, the peritoneum ascends to cover the anterior surface of the rectum, before engulfing the sigmoid colon

All right, now in females, the peritoneum travels in a similar fashion as it does in males, with the main differences coming near the posterior surface of the urinary bladder as the bladder sits anterior to the uterus.

Okay, now let’s take a deep breath and have a quick quiz! Can you name these structures?

All right, now an empty bladder has an apex, body, fundus, and neck, as well as four surfaces; superior, posterior, and two inferolateral surfaces.

The apex of the urinary bladder points anteriorly towards the pubic symphysis, and it’s connected to the umbilicus by a ligament called the median umbilical ligament. The fundus, on the other hand, lies opposite to the apex, and forms the convex posterior surface of the bladder.

Next is the body, which lies between the apex and the fundus and makes up most of the urinary bladder. Finally, the fundus and the two inferolateral surfaces meet below to form the neck of the bladder, which continues inferiorly with the urethra.

Now, the bladder lies mostly free within the lesser pelvis, except for its neck, which is fixed by ligaments. These ligaments are the lateral ligaments of the bladder, the puboprostatic ligament in males, and the pubovesical ligament in females.

Now, let’s look inside the urinary bladder, which has irregular folds of mucous membrane called rugae. These rugae are best seen when the bladder is empty, because as the bladder fills, they begin to stretch and fade away.

Inside, the posterior wall of the urinary bladder has a smooth triangular area that doesn’t contain rugae -even if the bladder is empty- called the trigone of the urinary bladder. The base of this triangle is formed by an imaginary line that connects the openings of the ureters, called the ureteric orifices. The apex of the trigone points downwards, and is formed by the internal urethral orifice.

The venous blood of the bladder drains into a network of veins called the vesical venous plexus. In males, this plexus connects with the prostatic venous plexus, and these two plexuses surround the fundus of the bladder, the prostate, the seminal glands, the ductus deferens, and the lower part of the ureters.