A 20-year-old woman comes to the office because she has not had her first menstrual period. Physical examination shows normal breast development, but minimal axillary and pubic hair. Pelvic examination shows that the vagina ends in a blind pouch, and masses are palpable in the inguinal region. Which of the following karyotype findings is most likely? 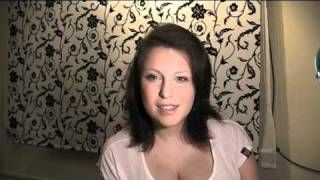 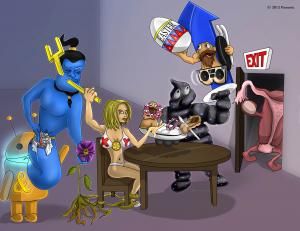 Androgen insensitivity syndrome is a genetic disorder, in which a person with an XY genotype - genetically a male – is “insensitive” or doesn’t respond to androgens, which are male sex hormones.

During the 7th or 8th week, the fetal gonads develop either into testes or ovaries.

In males, a gene on the Y chromosome, called the sex-determining region Y gene, or SRY gene for short, helps the fetal gonads turn into the testes.

By the end of week 8, the testes start producing androgens, the main one being testosterone.

A small fraction of testosterone, gets converted by the enzyme 5α- reductase into its more potent form, called dihydrotestosterone, which is mostly responsible for development of male external genitalia.

Now, once dihydrotestosterone reaches the undifferentiated external genital structures, it makes the genital tubercle elongate into the phallus that eventually becomes part of the penis.

Only the tips of these folds remain unfused to form the external urethral opening at the distal part of the penis.

The labioscrotal swellings also grow toward each other fuse medially to form the scrotum, which is the sac skin that contain the testes.

Internally, the urogenital sinus is connected to a set of ducts, called Wolffian and Mullerian ducts.

Testosterone also causes the Wolffian ducts to differentiate into the epididymis, vas deferens, and seminal vesicles.

At the same time, the testes also produce a hormone called anti-Müllerian hormone which prevents the Müllerian ducts from developing into the female reproductive tract and instead makes them degenerate.

In females, there’s no Y chromosome so the SRY gene is absent.

As a result, ovaries develop from the internal gonads, and androgen levels remain relatively low, so the genital tubercle remains small, forming the clitoris and the urethral folds and labioscrotal swellings remain unfused or separate, forming inner and outer skin folds that surround the opening of the vagina and are called labia minora and labia majora.

Without the testes, anti- Müllerian hormone is also absent, so Müllerian ducts develop into the fallopian tubes, uterus, and upper part of the vagina.

In androgen insensitivity syndrome, XY-individuals have testes that produce androgens, but these hormones can’t exert their action, because there’s a defect in the androgen receptor on various target tissues like the external genitalia, genital ducts, and the testes itself.

Androgen insensitivity can be complete, partial, or mild, depending on how well the androgen receptor is able to bind androgens.

In complete androgen insensitivity, the receptor is totally nonfunctional, so the cells don’t respond to androgens at all. As a result, the testes tries to respond by increasing androgen synthesis.

Without the effects of androgens, the testes sometimes don’t descend into the scrotum and instead remain in the abdomen or pelvis, which is called cryptorchidism.