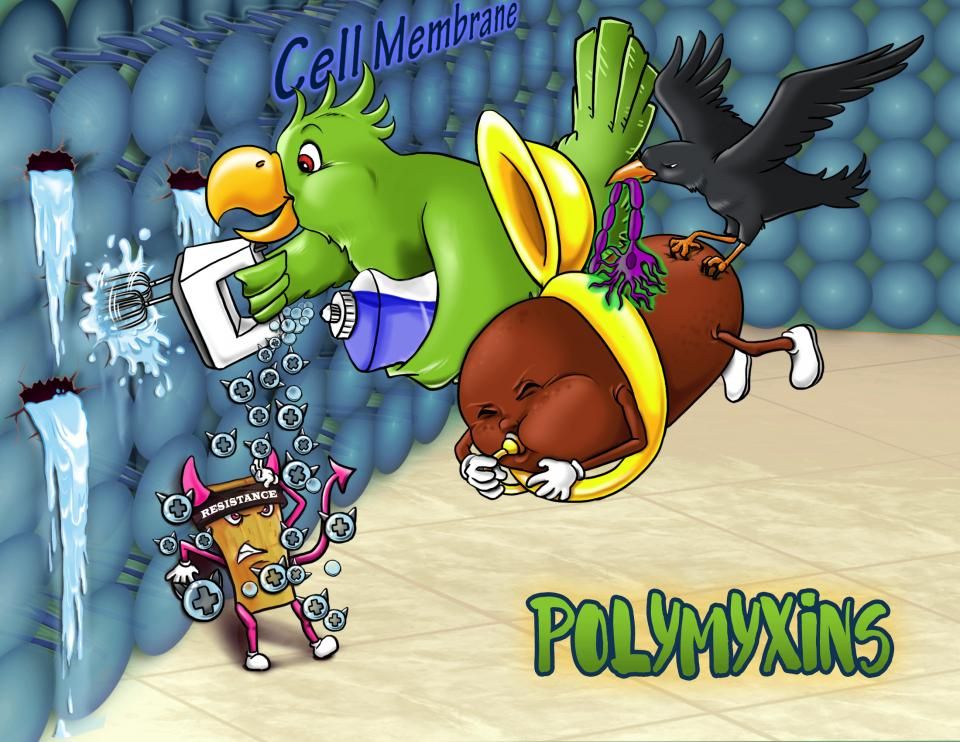 Polymyxins are an older class of antibiotics, which are nowadays used as a last resort to treat bacterial infections when other antibiotics are either contraindicated or ineffective.

There are two approved medications in this class: polymyxin B and polymyxin E, also known as colistin. Both are available for intramuscular and intravenous use.

Additionally, polymyxin B can be given intrathecally, as an ophthalmic formulation, as well as by inhalation.

Once administered, polymyxins work by binding to the bacterial membrane and disrupting it, which ultimately leads to bacterial cell death.

Now, polymyxins can cause serious side effects like neurotoxicity and nephrotoxicity. In fact, that’s a boxed warning for polymyxin B!

On the other hand, nephrotoxicity may present with a low urine output, albuminuria, cellular casts in the urine, and azotemia.

Finally, specific side effects associated with intravenous administration of polymyxins include fever, rash, and itching; while side effects of intrathecal polymyxin B use include headaches and neck stiffness.

Regarding contraindications, polymyxins should not be used during pregnancy and breastfeeding, as their safety hasn't been established.

These medications should be used cautiously in elderly clients, as well as in those with neuromuscular disease like myasthenia gravis, and in clients with renal disease.

Finally, polymyxins should not be combined with other neurotoxic or nephrotoxic medications, such as aminoglycosides. And again, that’s a boxed warning for polymyxin B!

Also, polymyxins shouldn't be used with general anesthetics and neuromuscular blocking agents, such as succinylcholine, rocuronium, vecuronium, and atracurium, as they can increase the risk of respiratory paralysis.

Now, when a client is diagnosed with hospital-acquired pneumonia and is prescribed polymyxin B, first, perform a baseline assessment including weight, vital signs, SpO2, respiratory status, as well as their fluid intake and output.