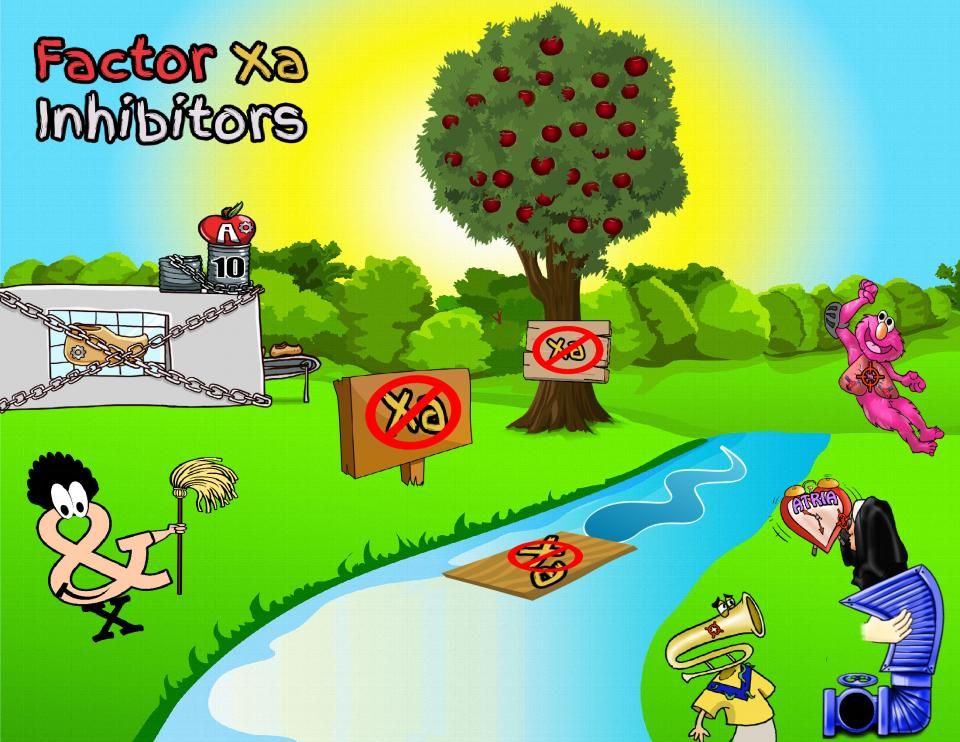 Anticoagulant medications help to prevent thrombi, or blood clots from forming. These medications work by interfering with the normal function of proteins called clotting factors in a chemical process called the coagulation cascade, or secondary hemostasis where hemo refers to blood, and stasis means to halt or stop. While the most common anticoagulants like warfarin and heparin act on multiple coagulation factors, in this video we’re gonna focus on anticoagulants that work on a single coagulation factor; either thrombin or activated factor X.

Now, the most common point of clot regulation is when a coagulation factor called thrombin is produced. Thrombin, or activated factor II, is a very important clotting factor, because it has multiple pro-coagulative functions. Think of thrombin as the accelerator on a car--the pedal that takes secondary hemostasis from 20 miles per hour to 100 miles per hour! First, thrombin binds to receptors on platelets causing them to get activated. Activated platelets change their shape to form tentacle-like arms that allow them to stick to other platelets. Second, thrombin activates two cofactors; factor V used in the common pathway, and factor VIII used in the intrinsic pathway. Third, thrombin proteolytically cleaves fibrinogen or factor I, into fibrin or factor Ia which binds with other fibrin proteins to form a fibrin mesh. And finally, thrombin proteolytically cleaves stabilizing factor or factor XIII into factor XIIIa. Factor XIIIa combines with a calcium ion cofactor to form cross links between the fibrin chains, further reinforcing the fibrin mesh.

Now, let's discuss each class of medications in more detail starting with the direct thrombin inhibitors like bivalirudin, lepirudin, and argatroban, which are given intravenously, desirudin, which is given subcutaneously, and dabigatran, which is given peroral. This class of medications was initially isolated from the saliva of leeches due to its anticoagulant effect. Although they are not as frequently used as heparin, they can be a 2nd line medication in people with a history of deep vein thrombosis to prevent pulmonary embolism, or atrial fibrillation to prevent strokes. Direct thrombin inhibitors are especially useful when heparin causes an adverse reaction called HIT, or heparin induced thrombocytopenia. HIT occurs when some people produce antibodies, which bind to heparin bound to a protein on the surface of platelets called platelet factor 4. The complex antibody-heparin-platelet factor 4 leads to platelet activation and aggregation, hence thrombosis. There is also destruction of platelets by cells of the spleen called macrophages, resulting in a low platelet count. These medications are also used in combination with antiplatelet agents like aspirin and clopidogrel to prevent clot formation in patients undergoing coronary artery surgery.