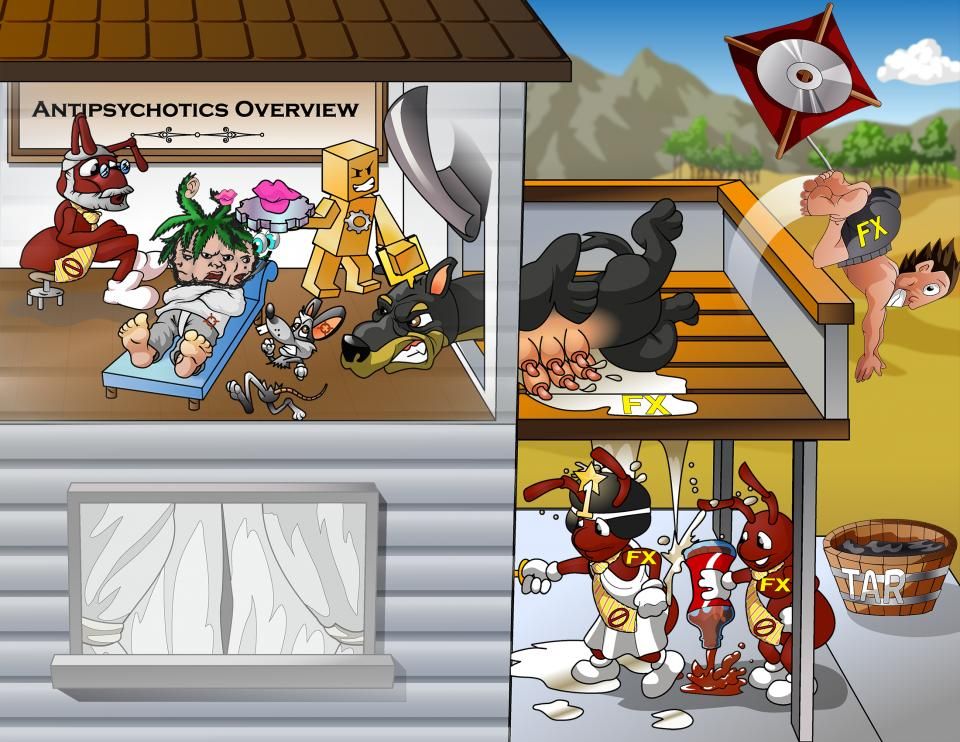 Antipsychotics are medications mainly used to treat schizophrenia and other psychotic disorders, such as psychosis, acute mania, delirium, bipolar disorders, and obsessive-compulsive disorders.

Antipsychotics are most often administered orally, but some can also be sublingual or transdermal, or injected intramuscularly, intravenously, or subcutaneously.

Once administered, they travel to the brain and block dopamine D2 receptors in the mesolimbic pathway, thereby helping alleviate some psychotic symptoms.

These medications have a high affinity for dopamine receptors, meaning they require lower doses to achieve their therapeutic effect.

On the flip side, low-potency antipsychotics include medications such as thioridazine, chlorpromazine, and thiothixene.

These medications have less affinity for dopamine receptors, therefore they require larger doses to achieve the same therapeutic effect as high-potency antipsychotics.

On the other hand, second generation, or atypical antipsychotics, include medications such as clozapine, olanzapine, quetiapine, risperidone, and ziprasidone.

Another atypical antipsychotic is asenapine, which is administered sublingually or transdermally, to prevent clients from “cheeking” their medication; that’s when a client pretends to swallow their medication, but instead keeps it hidden between the teeth and the cheek.

On the flip side, the blockade of dopamine receptors in the nigrostriatal pathway results in extrapyramidal symptoms, which usually involve abnormal movements like dystonia, which can occur within a few hours to days of treatment, and includes muscle spasms of the tongue, face, neck, and back.

This side effect is also associated with oculogyric crisis, which is a spasm of the extraocular muscles, causing an upward and outward position of the eyes.

After a few days to a month, a client can develop akathisia, characterized by restlessness and an urge to move the limbs, as well as, pseudoparkinsonism, characterized by muscle rigidity, usually in the facial muscles, and symptoms, such as bradykinesia or slow movements, and tremors.

Now, the most dangerous extrapyramidal side effect is neuroleptic malignant syndrome or NMS for short, which typically starts days to weeks after starting the medications.

Now, besides dopamine receptors, antipsychotics can also block other receptors. Other side effects caused by blockade of muscarinic receptors include anticholinergic side effects such as dry mouth, blurred vision, urinary retention, and constipation.