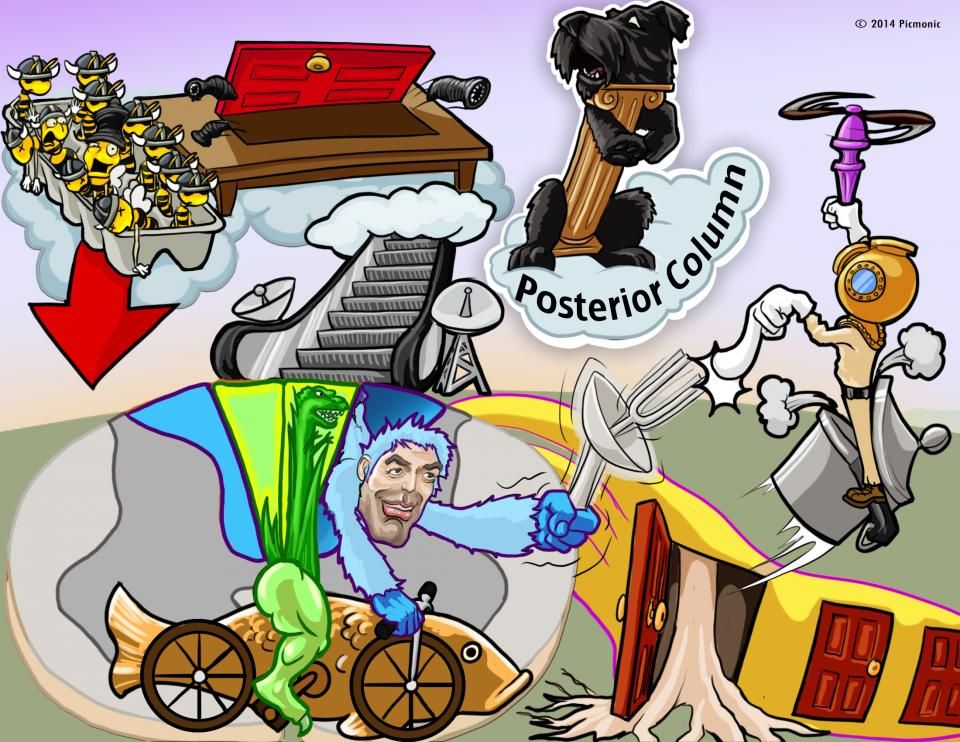 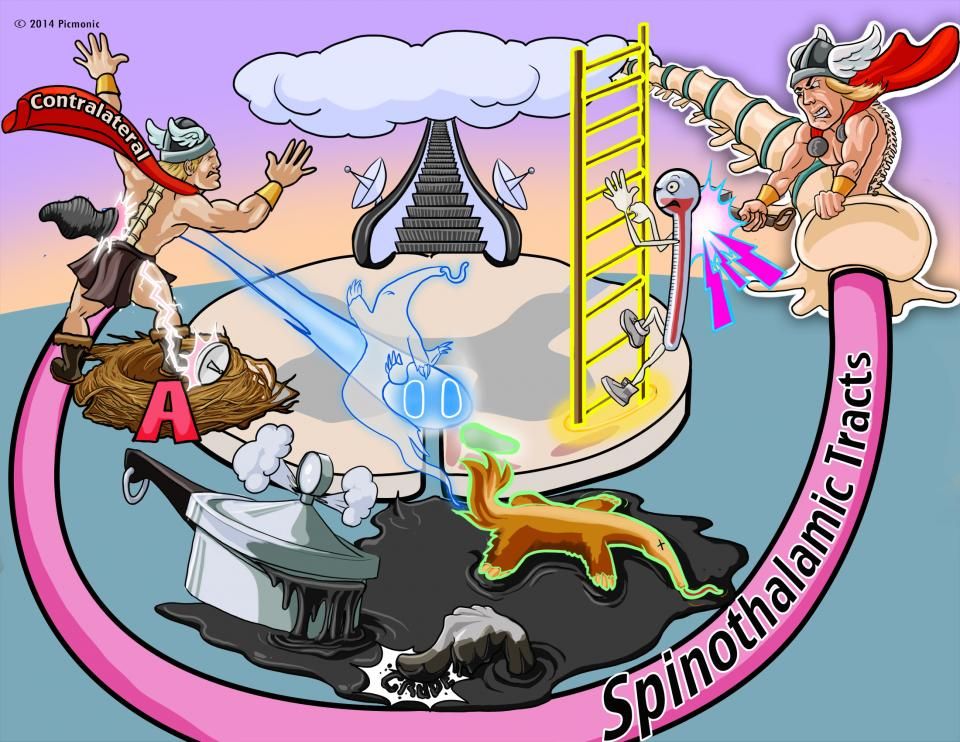 Ascending and descending spinal tracts are pathways that carry information up and down the spinal cord between brain and body.

The ascending tracts carry sensory information from the body, like pain, for example, up the spinal cord to the brain.

Descending tracts carry motor information, like instructions to move the arm, from the brain down the spinal cord to the body.

Both types of tracts are made up of neuronal axons that gather into long columns called funiculi, meaning long ropes, which are found inside the ventral, lateral and dorsal parts of the spinal cord.

Ascending tracts are sensory pathways that begin at the spinal cord and stretch all the way up to the cerebral cortex.

There are three types of ascending tracts, dorsal column-medial lemniscus system, spinothalamic (or anterolateral) system, and spinocerebellar system. They are made up of four successively connected neurons.

They further transmit it to the third order neurons found inside the thalamus, and then the fourth order neurons in the cerebral cortex.

While ascending through the spinal cord these tracts cross over to the opposite side of the central nervous system, or CNS, meaning that the left side of the brain receives sensory input from the right side of the body and vice versa.

These crossings are called decussations and they happen at different levels of the CNS for each of these tracts.

Let’s start with the dorsal column-medial lemniscus system which is a sensory pathway that transmits delicate sensations like vibration, proprioception or sensation of the position of bodyparts, two-point discrimination, and touch.

Throughout the body there are receptors like mechanoreceptors found in the skin that sense touch, or proprioceptors, like the muscle spindles and Golgi tendon organs in the muscles and joints that sense body position.

When stimulated, they send sensory input through peripheral nerves that are made of the axons of first order neurons. These nerves travel to the dorsal root ganglion where the first order cell bodies reside.

These ganglions send out short axons that enter the spinal cord and to the ipsilateral dorsal area, called the dorsal column.

Inside these two nuclei both fasciculi end by synapsing on the bodies of the second order neurons. Second order neuronal axons now decussate and form the pathway called medial lemniscus, which is Greek for ribbon, that ascends to the contralateral thalamus, more specifically to its ventral posterolateral nucleus.

Moving on! We have the spinothalamic system, also known as the anterolateral system, or ALS.

These are sensory pathways that transmit sensory information about crude touch from free nerve endings, pain from nociceptors, pressure from mechanoreceptors, and temperature from thermoreceptors from the skin and organs.

First order neurons travel from these receptors to the dorsal root ganglion just like with the dorsal column-medial lemniscus system, and then that information is sent through another bundle of axons that enters the ipsilateral spinal cord.

Here, they ascend one or two segments before synapsing directly or indirectly, through interneurons, on the second order neurons, whose cell bodies are found inside the posterior, or dorsal horn of the spinal cord.

Both anterior and lateral spinothalamic tracts ascend through the contralateral spinal cord all the way up to the contralateral thalamus, again to its ventral posterolateral nucleus like the dorsal column system did, and end by synapsing on the third order neurons found inside this nucleus.

From here on it’s pretty much the same. Third order neuronal axons ascend toward the cerebrum through the internal capsule to the primary somatosensory cortex where they synapse on the fourth order neurons.

Okay. The last ascending tract, called spinocerebellar tract, is a sensory pathway that is in charge of sending sensory information that will help coordinate the muscles in the trunk and the limbs. These sensory input come from the proprioceptors.

But unlike dorsal column system, spinocerebellar tract transmits unconscious proprioceptive sensations about the position of your body parts like your stance, and how flexed are the joints like the knees and elbows.

These travel through first order neurons that form peripheral nerves and enter the dorsal root ganglion which send out axons that enter the spinal cord and synapse on the second order neurons found inside the ipsilateral gray matter.

Next, we can see the ventral spinocerebellar tract ascending to the superior cerebellar peduncle, passing through it and then decussating again before arriving at the ipsilateral cerebellar cortex where it synapses on neurons inside the cortex.

The dorsal spinocerebellar tract doesn’t decussate at all but ascends to the inferior cerebellar peduncle, passes through it and arrives at the ipsilateral cerebellar cortex as well, ending it’s journey by synapsing on the last neuron inside the cortex.

So compared to other sensory tracts, the spinocerebellar tract has three orders of neurons instead of four and transmits information between ipsilateral cerebellum and body.

Okay, now that we have finished ascending tracts let’s look into the descending tracts which are motor pathways that’s in charge of controlling muscles of the trunk and extremities.

From the ventral horns their axons leave the spinal cord as peripheral nerves that innervate the muscles in the body.

So first we have the direct motor pathways, also known as the pyramidal tracts. They send the motor input necessary for fine, conscious muscle movements like those needed to move the hand when drawing or writing.

When we look at the brain, in front of the somatosensory cortex there is the primary motor cortex that contains cells called pyramidal cells.

Ascending and descending spinal tracts are neural pathways within the spinal cord, which carry information up and down the spinal cord connecting the brain to the rest of the body.

The ascending tracts include the dorsal column-medial lemniscus system, the spinothalamic system, and the spinocerebellar system. These tracts carry sensory information from the periphery, such as pain, touch, and temperature to the brain.

The descending tracts include lateral and anterior corticospinal tracts, the vestibulospinal, the rubrospinal, and the reticulospinal tracts. These tracts carry motor information, such as a motor command to move the arm, from the brain down the spinal cord to the appropriate part of the body.