A 12-year-old boy is brought to the clinic due to recurrent episodes of dyspnea and wheezing over the past several weeks. The patient came to the clinic 3 months ago and was diagnosed with intermittent asthma. He was prescribed an albuterol inhaler and instructed to use it as needed. The patient’s parent states the patient uses the inhaler several times per day and has found mild relief. Temperature is 37.0°C (98.6°F), pulse is 80/min, respirations are 14/min, blood pressure is 110/76 mm Hg, and oxygen saturation is 99% on room air. The patient is resting comfortably. Physical examination reveals scattered wheezes on chest auscultation. Which of the following drugs should be added to this patient’s treatment regimen? 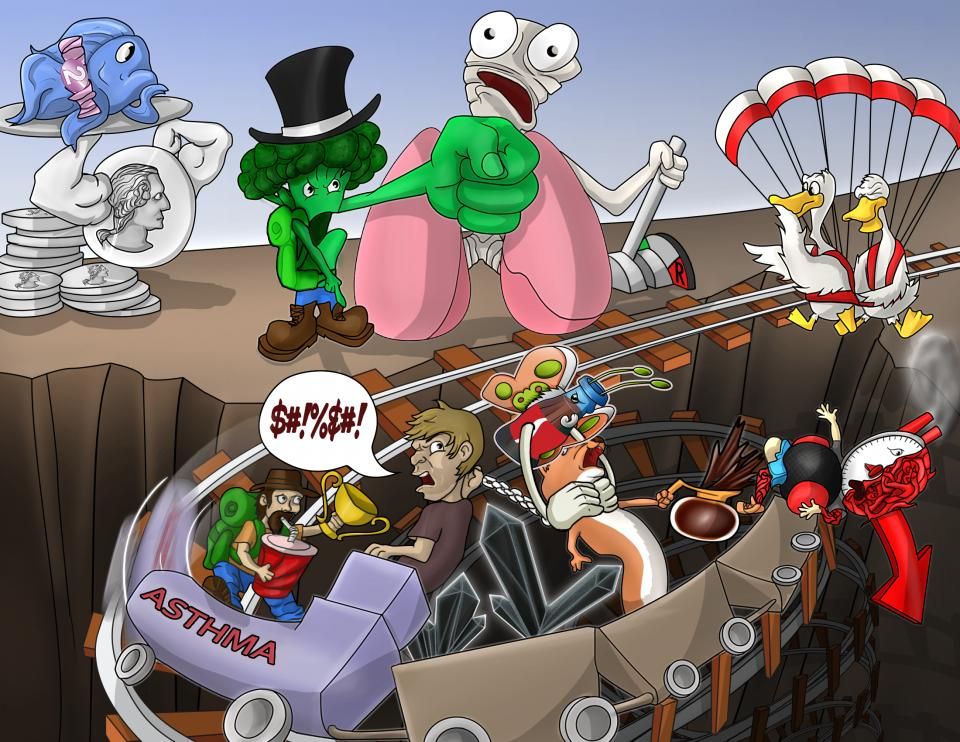 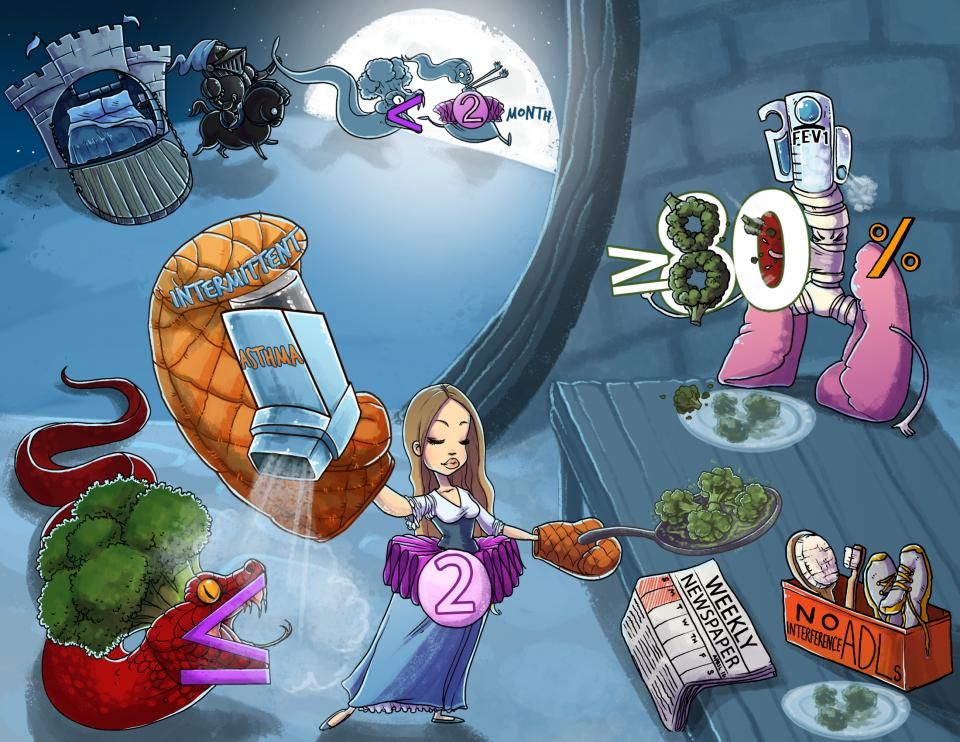 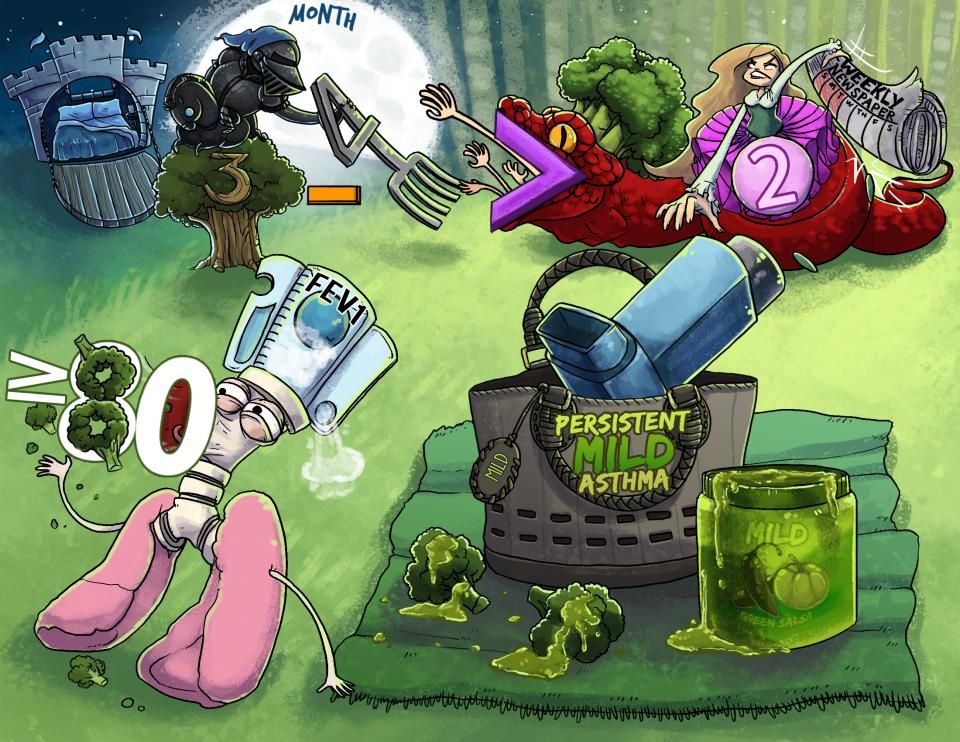 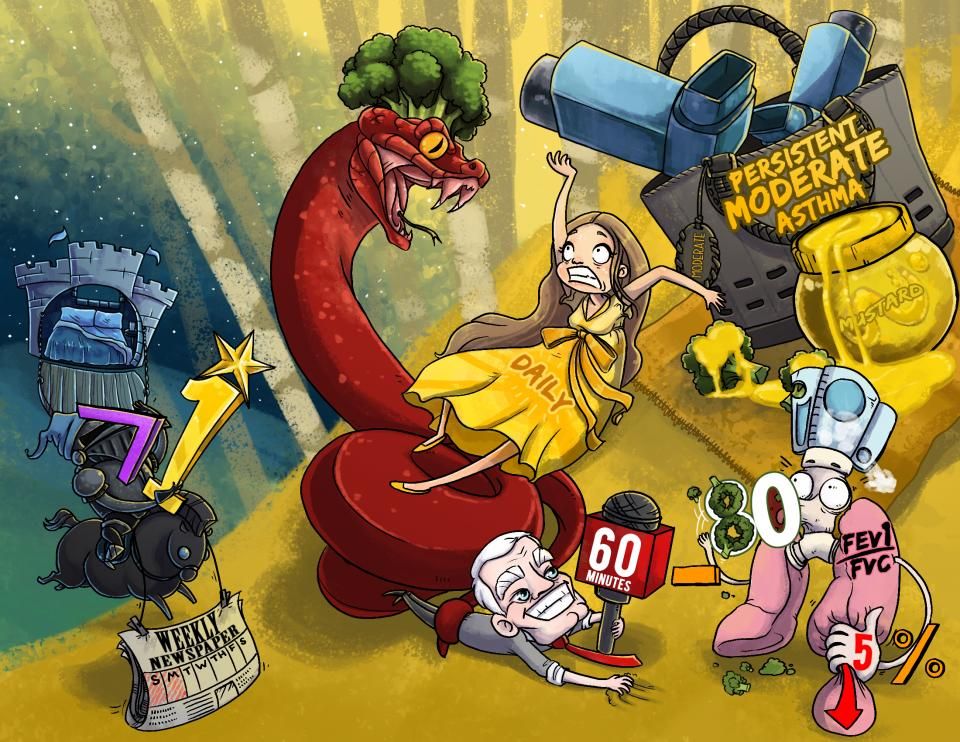 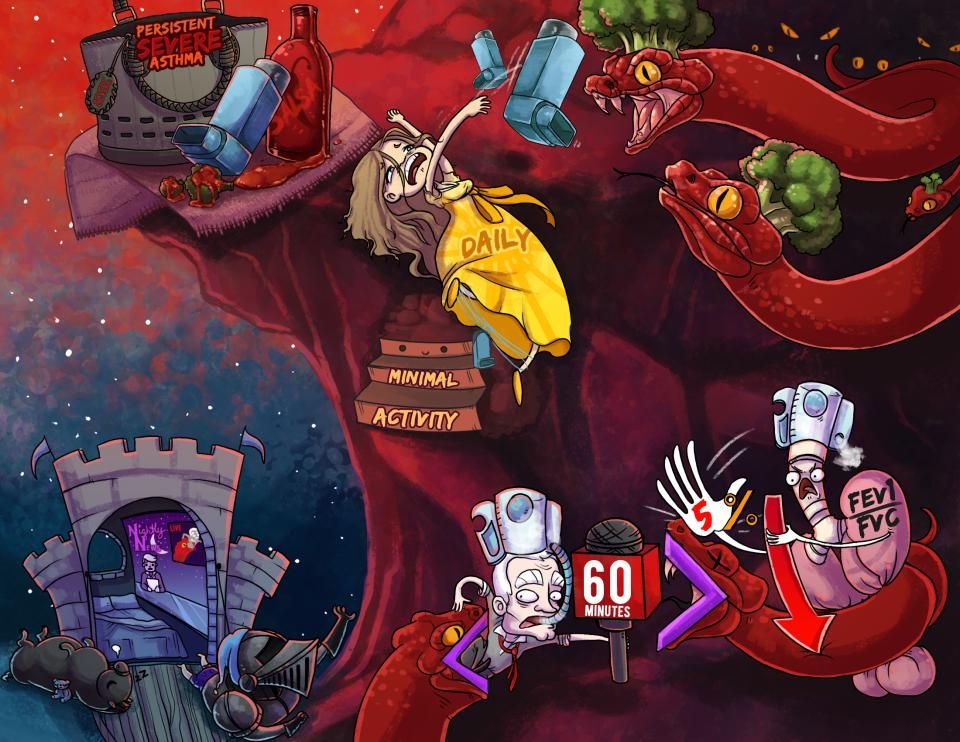 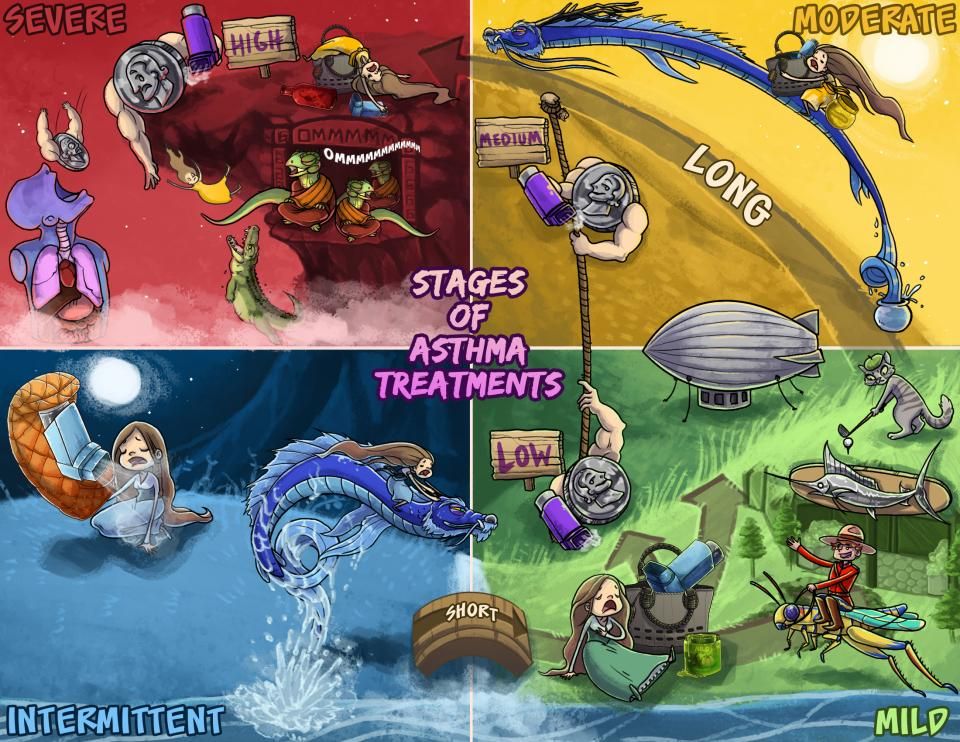 Asthma is an episodic, chronic respiratory disorder characterized by airway obstruction caused by inflammation and hyperresponsiveness of the bronchial smooth muscle. The two golden words in asthma are “reversible”, which means the obstruction can virtually disappear with medications like bronchodilators, and “inducible”, which means the obstruction can occur in response to a variety of stimuli; including allergens like house dust mites, pet animal dander, like cat dander, and pollen, or irritants like tobacco smoke, respiratory tract infections, like a common cold or pneumonia, cold or dry air, and even emotional stress. Now, atopy is the genetic predisposition of an individual towards developing IgE antibodies to otherwise harmless environmental antigens, making that individual strongly predisposed to developing three allergic disorders, eczema or atopic dermatitis, allergic rhinitis, and asthma, collectively coined the atopic triad. Because of this genetic component, asthma is usually diagnosed in early childhood, and may or may not carry on into adulthood.

So, let’s say a genetically predisposed child is exposed to a potential allergen for the first time. First off, dendritic cells take up the allergen and present it to a type 2 helper T-cell, or Th2 cell. In asthma, Th2 cells make the mistake of thinking this harmless antigen is an allergen, so they release cytokines that stimulate B cells to make IgE antibodies. IgE antibodies then prime mast cells, which cautiously anticipate the next event. When the child is re-exposed to the allergen, the mast cells spill out vasoactive mediators like histamine and leukotrienes, which cause bronchoconstriction and inflammation. Once the child is no longer exposed to the allergen, the immune system relaxes, and everything goes back to normal, until the next event. Now, not all asthma episodes are triggered this way by an allergen. A unique form of asthma is aspirin sensitive asthma, which is characterized by the triad of asthma, nasal polyps, and sensitivity to aspirin or NSAIDs. Aspirin opposes prostaglandin production and tips the balance between prostaglandins and leukotrienes in favor of increased leukotriene production, which promotes smooth muscle contraction of the airways.

All right, so patients with asthma have intermittent episodes of dry cough, chest tightness, and shortness of breath. Some patients have just a single symptom - like cough, making the diagnosis more difficult. These symptoms may occur at any time of the day but symptoms occurring or worsening at night is characteristic of asthma. On auscultation there will likely be wheezing during expiration, because that’s when the airways collapse and become narrow. Percussion may reveal hyperresonance, which indicates that the bronchoconstriction has led to air trapping and hyperinflation. Severe episodes are ones where a patient struggles to breathe - they may only be able to speak in short phrases, and may need to use accessory muscles like the scalene muscles of the neck, or the intercostal muscles of the ribs to help with breathing. .

But as the saying goes, “all that wheezes isn’t asthma”. For example, chronic obstructive pulmonary disease, or COPD, can also cause wheezing, but it’s more common in the older patient who smokes and in COPD the symptoms are often irreversible because there are permanent changes to the architecture of the lungs. Another one is aspiration of a foreign body which might obstruct an airway, and cause wheezing in one area of the lungs. This usually occurs in young children, and there’s often a sudden onset of wheezing and cough along with a history of the child being unobserved or potentially swallowing something. Bronchiolitis, or inflammation of the small bronchioles, is often seen in children less than 2 years of age, and presents with acute cough, wheeze and shortness of breath following an upper respiratory tract infection like a common cold. Gastroesophageal reflux disease, or GERD, can also mimic asthma with symptoms like chronic cough and wheezing, however the patient is often an obese adult, and symptoms often improve with proton-pump inhibitors. Allergic bronchopulmonary aspergillosis, or ABPA, is an allergic response to aspergillus antigens and usually occurs in the setting of asthma or cystic fibrosis. ABPA presents with wheezing and high serum IgE levels and eosinophil counts, however chest radiographs often show recurrent pulmonary infiltrates. Finally, there’s Churg-Strauss syndrome which is a small vessel vasculitis that’s associated with eosinophilia and wheezing, but patients also have skin purpura and peripheral neuropathy.

Okay, so when asthma is suspected, the first step in diagnosis is conducting pulmonary function tests, or PFTs. The most important measurements are the forced vital capacity, or FVC, which is the total volume of gas exhaled after a forced maximum inspiration and the forced expiratory volume at 1 second, known as FEV1, both of which are decreased in asthma. Now, because asthma is an obstructive lung disease, the FEV1 is decreased to a greater degree than the FVC1, so the ratio of FEV1 to FVC is usually less than 80%. Also, because asthma is episodic in nature, the PFTs are only abnormal when the patient is having symptoms. If a person is symptomatic, the next step is to give a bronchodilator like albuterol, which reverses the PFT measurements back towards normal, confirming the diagnosis of asthma. This is known as the reversibility test. A significant reversal is defined as an increase in the FEV1 by more than 12% from baseline. If the reversal is less than 12% after giving a bronchodilator, then the patient is less likely to have asthma. Now, if you do PFTs on asymptomatic patients, they would be normal, since asthma is an episodic disease. So, in this case we try to induce asthma symptoms by performing the “methacholine challenge test”. Methacholine is like acetylcholine, so it binds to muscarinic receptors on bronchial smooth muscle, causing mild bronchoconstriction. In a healthy individual who doesn't have asthma, this bronchoconstriction is negligible, and doesn’t cause a significant change in PFT measurements. But because an asthmatic patient’s bronchial smooth muscle is “hyperresponsive”, methacholine causes a 20% decrease in their FEV1 from the baseline. Remember the golden asthma words; reversible and inducible!

Now some additional tests are not specific to asthma, but they might help with the diagnosis. A complete blood count, or a CBC may show an increased eosinophil count. Serum IgE levels may also be increased. And skin testing may help identify specific allergens that the patient can subsequently avoid. That involves injecting small quantities of known allergens into the patient’s skin, and then observing to see if the immune system overreacts to it.

Okay, so after diagnosing asthma, the next step is to determine how bad it is. Asthma severity is classified as intermittent, mild persistent, moderate persistent, or severe persistent, based on five parameters; the frequency at which a patient experiences symptoms, the frequency at which the patient experiences night time symptoms, the need for a SABA to control symptoms, the FEV1 in between exacerbations, and the degree to which the asthma interferes with the patient’s normal daily activities, like going to work. Children less than 5 years of age can’t usually follow PFT instructions, so the FEV1 parameter is eliminated.

Finally, step 6 involves the use of a SABA when needed with a high dose ICS-LABA combination plus oral systemic corticosteroids.