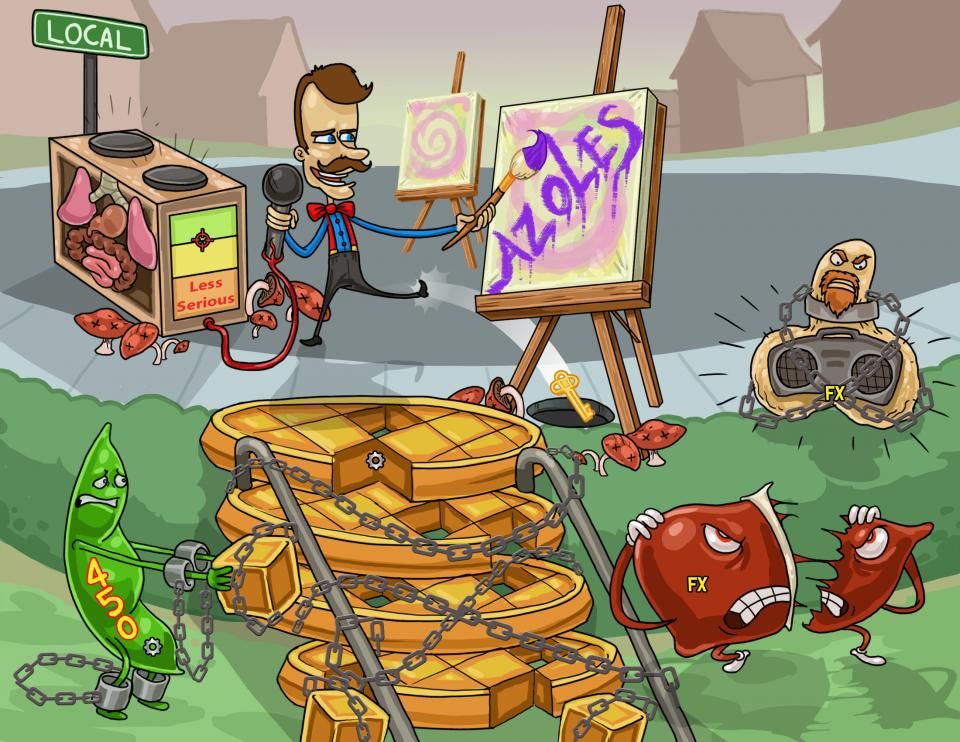 The “azole” antifungals are a family of medications used to treat mycoses, or fungal infections.

Mycoses can be superficial, like on the skin or hair, or develop into systemic infections in immunodeficient people.

Azoles are divided into two major families of antifungals: imidazoles and triazoles.

Most fungal cells have a tough outer cell wall and an inner cell membrane.

Humans have cholesterol, while fungi have ergosterol.

Both sterol molecules help keep the cell membrane stable at a wide range of temperatures.

The azole antifungals include imidazoles, like clotrimazole, isoconazole, miconazole, butoconazole, fenticonazole, and ketoconazole; as well as triazoles like fluconazole, itraconazole and voriconazole.

These medications work by inhibiting the fourteen-alpha-demethylase enzyme.

However, they also inhibit human cytochrome P450 enzymes to a lesser degree.

Because of this, the vast majority of azoles come in topical form, and they’re commonly used to treat superficial mycoses.

Azole creams are used for treating dermatophytosis, or ringworm, which is a red, itchy, scaly, circular rash, on the feet, groin, or armpit area, caused by Trichophyton fungus.

These fungi are also responsible for the more common “athlete’s foot” or “jock itch”.

Additionally, azoles can be used to treat tinea versicolor, caused by Malassezia globosa.

This disease is characterized by hypopigmentation or hyperpigmentation in patches of skin.

Last but not least, topical azoles are also used to treat yeast infections, such as oral or vaginal candidiasis caused by Candida species.

Topical use of azole antifungals is generally considered to be safe, since absorption through the skin is minimal, and the most common side effect is skin irritation.

Azoles are synthetic antifungals with broad spectrum activity against various fungal infections. Azoles bind to the ergosterol molecule in the fungal cell membrane and cause holes to form, which damages the cell membrane and eventually kills the fungus. Examples of azoles include drugs like clotrimazole, fluconazole, and itraconazole. Some of the side effects of azoles include nausea and vomiting, gynecomastia, and hepatotoxicity.