Endoscopic appearance of edematous or "cherry red" epiglottis is indicative of .

A 46-year-old man comes to the emergency department because of a sore throat. He reports difficulty swallowing solid foods, a "hoarse" voice, and fevers up to 40.5°C (105°F) since yesterday. He denies any neck swelling or stiffness. He has no significant past medical history and rarely sees a doctor. He says he immigrated to the United States from the Dominican Republic as a child. Examination of the oropharynx is normal. A lateral radio-graph of the patient's neck is ordered and is shown below.                                                          Which of the following is the most likely cause of his symptoms? 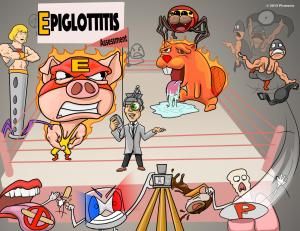 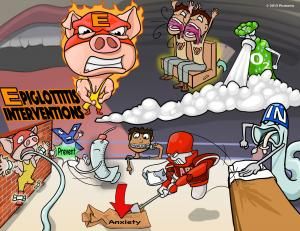 The larynx is located in the upper portion of the neck, just below where the pharynx splits into the trachea and the esophagus.

The larynx is also called the voice box because it contains the vocal cords, which are two folds of mucous membrane that can open and close like curtains.

Like the rest of the respiratory tract, the walls of the larynx are made up of mucosal epithelium.

The epiglottis extends from the base of the tongue and anchors to the anterior rim of thyroid cartilage, which is just in front of the larynx.

The lateral borders of the epiglottis connect to the aryepiglottic folds, which contain ligamentous and muscular fibers. This allows the epiglottis to act like a lid on a box and serve as the guardian of the airways.

Epiglottitis occurs when the epiglottis, aryepiglottic folds, and other adjacent tissues become infected.

These bacteria are spread person-to-person by direct contact or through respiratory droplets that are created when people cough or sneeze.

Once the bacteria enter the body, they can get through the epithelial layer of the epiglottis.

Immune cells in the epiglottis tissue, detect the invading bacteria and release cytokines, like Tumor necrosis factor-alpha, or TNF-alpha.

The cytokines cause blood vessels to become more permeable to fluid which results in local inflammation or swelling.

As the inflammation worsens, the swollen epiglottis starts to fatten up and block the larynx and obstruct airflow, and if the infection is severe it can quickly lead to respiratory failure.

In severe cases, respiratory failure can lead to a respiratory acidosis, a buildup of carbon dioxide in the blood.