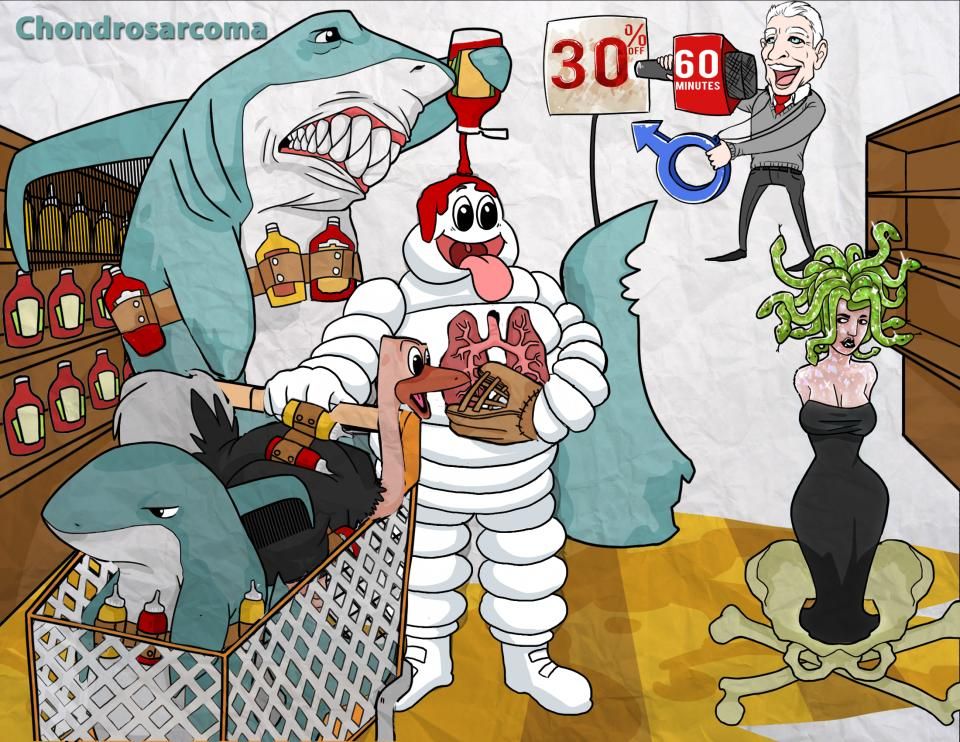 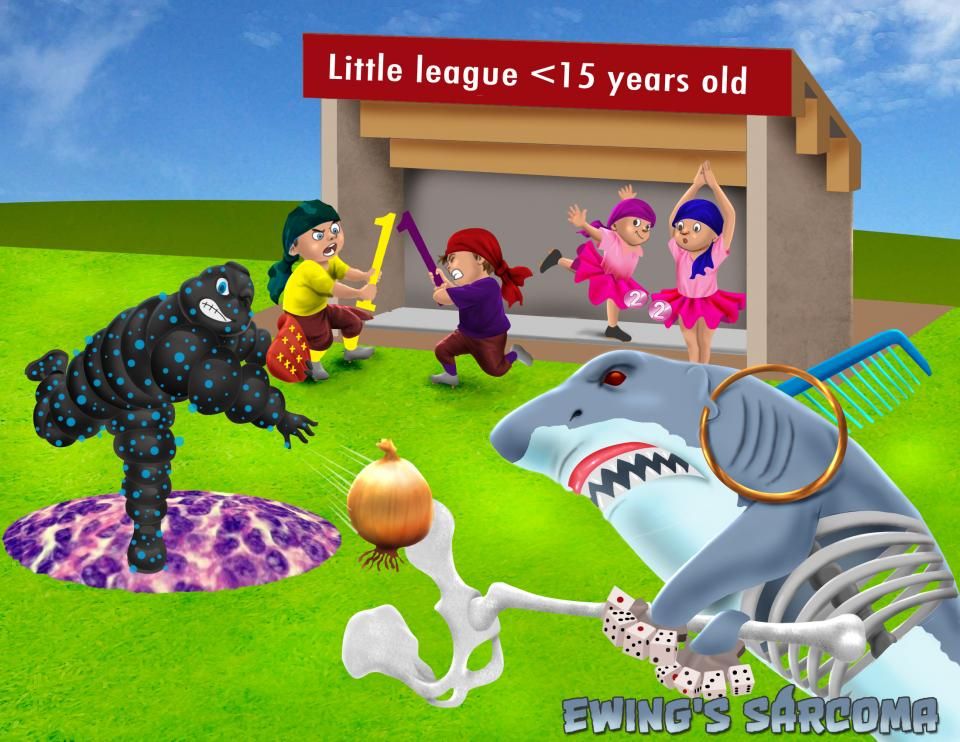 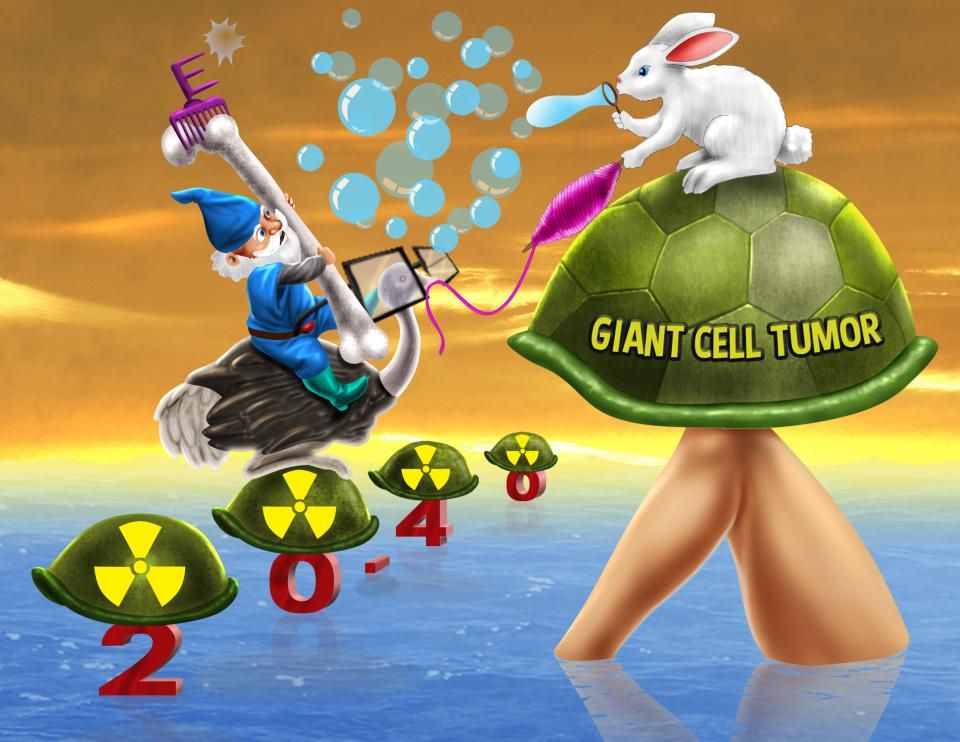 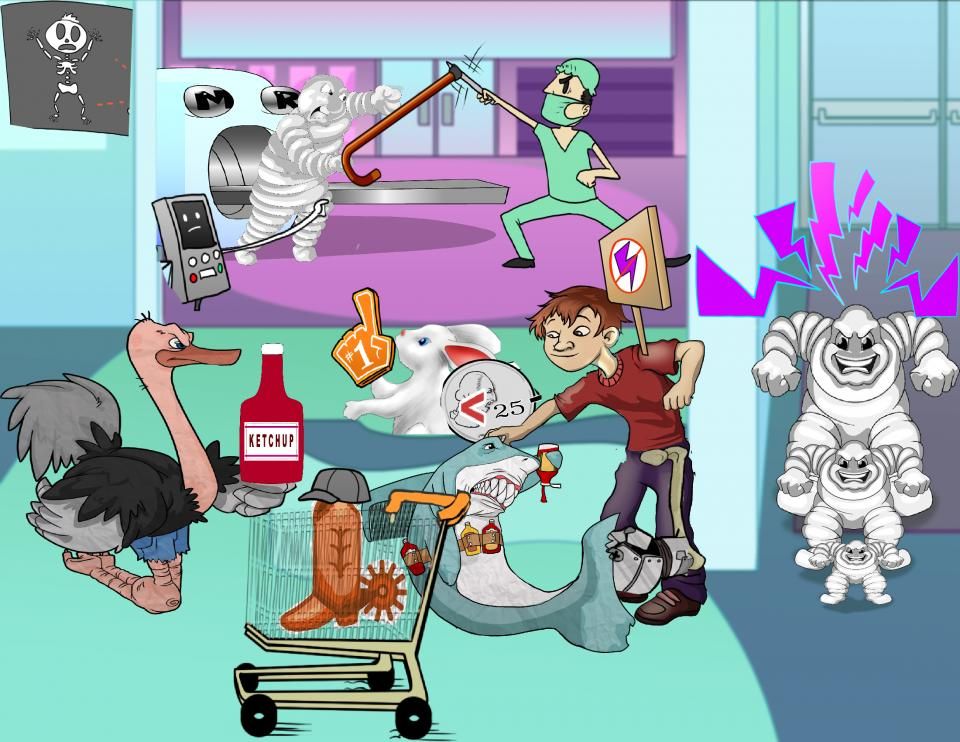 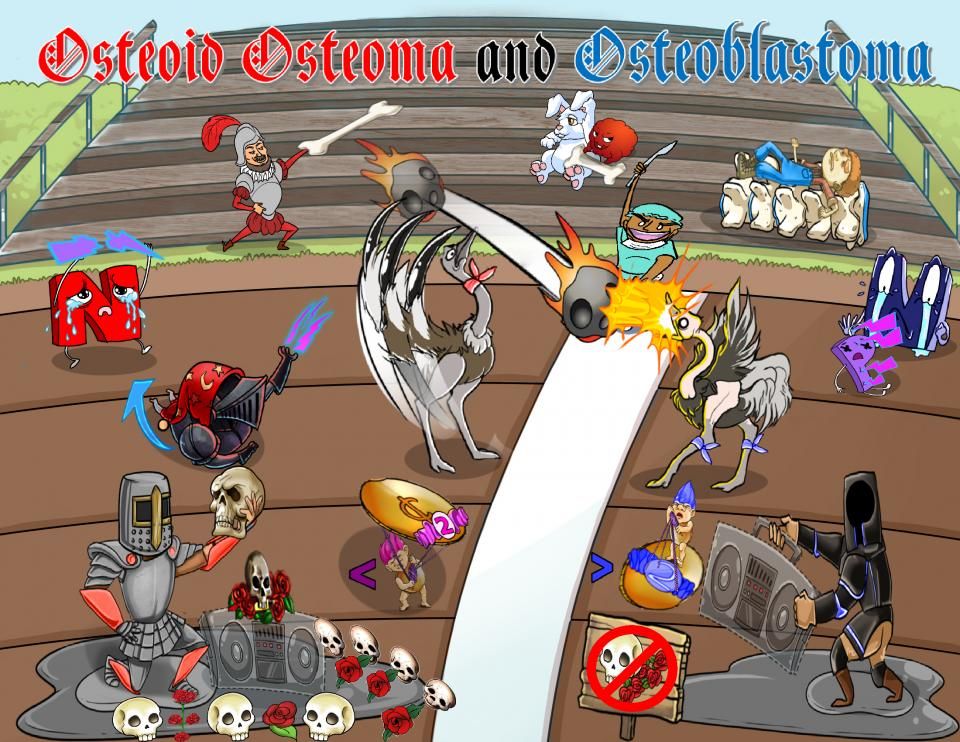 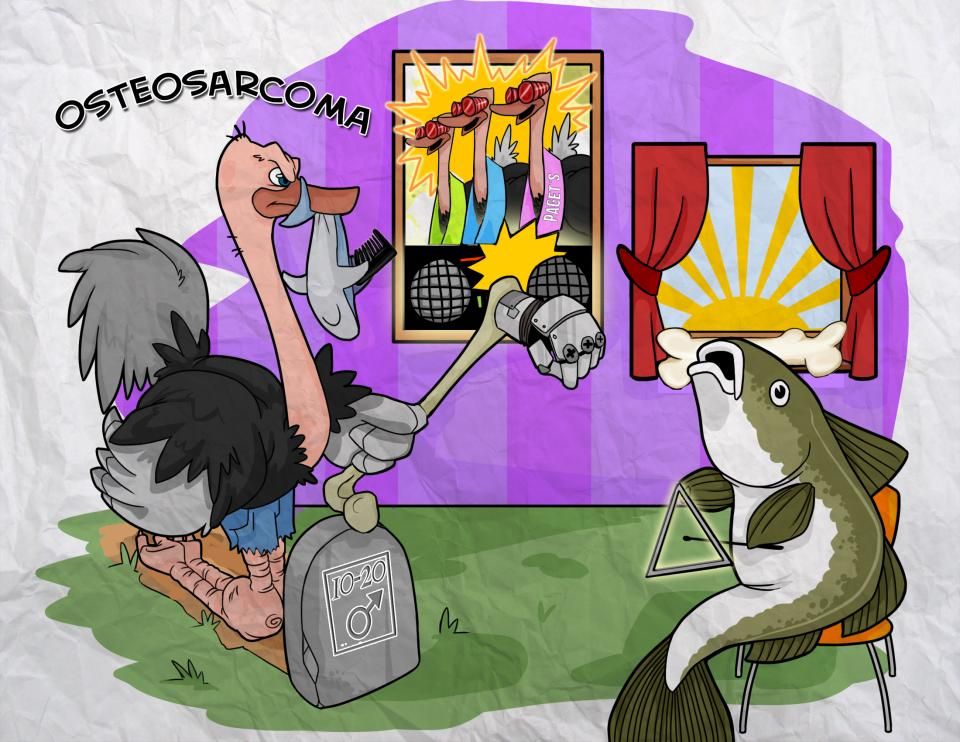 Bone tumors form when bone cells divide uncontrollably and forms a mass or tumor. If the tumor remains confined and doesn’t spread into surrounding tissues, then it’s considered benign. But if the tumor invades into surrounding tissues and metastasizes or spreads through blood or lymph, then it’s considered malignant. Malignant tumors can either be primary which is when they arise from the bone cells, or secondary, which is when a tumor developed somewhere else in the body, like the breast, prostate, lungs, thyroid, and the kidneys, metastasized and spread to the bones.

So, let’s start with benign bone tumors. The most common one is osteochondroma, and it commonly affects males under age 25. Osteochondroma is thought to arise from the growth plate tissue, and it’s caused by mutations in the Exostosin 1, or EXT1 and Exostosin 2 or EXT2 genes. These genes encode proteins with the same names that help synthesize heparin sulfate, which regulates growth plate, growth. So, as a result, osteochondroma typically develops as a lateral bony projection, which contains a marrow cavity that is continuous with that of the underlying bone. This bony stalk is called an exostosis, and it has a cap, made mostly of hyaline cartilage. Now, given their growth plate origin, a high yield fact is that osteochondromas typically develop in the metaphysis of long bones, usually the distal femur and the proximal tibia. This type of tumor can sometimes undergo malignant transformation into chondrosarcoma, but this is uncommon.

Another benign tumor is the giant-cell tumor of the bone, more common in those 20 to 40 years old. The tumor consists of reactive osteoclasts-like cells, which have numerous nuclei, typically over 50, and of neoplastic mononuclear cells that express RANKL, a receptor that mediates osteoclast formation, differentiation, and survival. A well-known risk factor is having bon trauma like a fracture or radiation exposure. Now, this tumor typically arises in the knee region, in the epiphysis of the long bones, like the distal femur and the proximal tibia. And although it rarely becomes malignant, it is still considered a locally aggressive benign tumor.

Next we have osteoblastoma, which is more common in males, and osteoid osteomas, which is also more common in males, but it’s more frequent in those under 25 years of age. A high-yield concept is that both of these tumors arise from osteoblasts and they form a nidus, which is a disorganized mix of small blood vessels, tiny rods of bone called trabeculae, and unmineralized bony tissue called osteoid. In osteoblastomas, the nidi are larger, with a diameter of over 2 centimeters. In osteoid osteomas, the nidi are smaller than 2 centimeters in diameter and are often surrounded by a ring of sclerotic bone tissue. That ring of sclerotic tissue often produces prostaglandins, which are small molecules that trigger the sensation of pain. This explains why nonsteroidal anti-inflammatory drugs or NSAIDs that decrease prostaglandin production work so well in relieving the pain associated with this tumor. In contrast, in osteoblastoma, pain is unresponsive to NSAIDs. Osteoblastomas also tend to affect the vertebrae, where they cause bone erosion, whereas osteoid osteomas typically affect the cortex is of long bones like the tibia, and don’t usually erode the surrounding bone.

Osteomas are benign tumors that typically affect middle aged people. They consist primarily of well-differentiated mature, compact or trabecular bone and are typically found on the surface of facial bones. Something else interesting about them is that they are associated with Gardner syndrome, which is an autosomal dominant form of polyposis characterized by multiple polyps in the colon together with tumors outside the colon. Malignant transformation has not been reported in these tumors.

Now, switching to malignant tumors. Remember that malignant metastasis to the bones are much more common than primary bone tumors; they have a predilection for the axial skeleton. For primary malignant bone tumors, osteosarcoma is the most common, accounting for around 20% of all bone cancer cases, especially in males under 20 years. It is not as prevalent in older individuals, where it usually develops secondary to predisposing factors, like Paget disease of bone, which is a condition where there’s abnormal bone remodeling; bone infarcts; familial retinoblastoma which is a childhood malignant tumor of the eye; and Li-Fraumeni syndrome, a condition in which there are a variety of cancers throughout the body. Osteosarcomas arise from osteoblasts, and the neoplastic cells are often different sizes, called pleomorphic, and they produce too much osteoid tissue. Some high-yield mutations associated with these pleomorphic osteoblasts include mutations in the pRB protein, also seen in familial retinoblastoma, and the p53 protein, which is also seen in Li-Fraumeni syndrome. Location-wise, the tumors often form in the metaphysis of long bones, especially in the knee region, because the cells there divide constantly. Osteosarcoma is very aggressive, with primary tumors having a better prognosis because they usually respond to treatment, whereas secondary osteosarcomas have much more reserved prognosis because they don’t typically respond well to chemotherapy or surgery.

Another type of malignant bone tumor is Ewing sarcoma, which is common in male caucasian adolescents under 15 years of age. Origin-wise, there is still some debate, but most seem to think the tumor arises from either neural crest cells or mesenchymal cells. Regardless of their origins, these malignant cells look like small, round, blue cells that resemble lymphocytes on microscopy, which is why Ewing's sarcoma needs to be differentiated from conditions with similar cells, like lymphoma and chronic osteomyelitis. Ewing sarcoma is associated with chromosomal mutations, specifically a translocation between the FLI1 gene on chromosome 11 and EWSR1 gene on chromosome 22. The EWSR1/FLI1 fusion results in the expression of an abnormal protein called the EWSR1/FLI1 fusion protein or simply the Ewing sarcoma protein. This protein causes defects in the differentiation process of human mesenchymal stem cells and neuroectodermal cells, resulting in Ewing sarcoma tumor cells. Ok, so the preferred location of this type of tumor is the diaphysis of long bones and the pelvic flat bones, especially the femur and the sacrum. Like most malignant tumors, Ewing's sarcoma is aggressive, resulting in early metastases, but the good news is that it responds well to chemotherapy.