Assessments
Bones of the neck 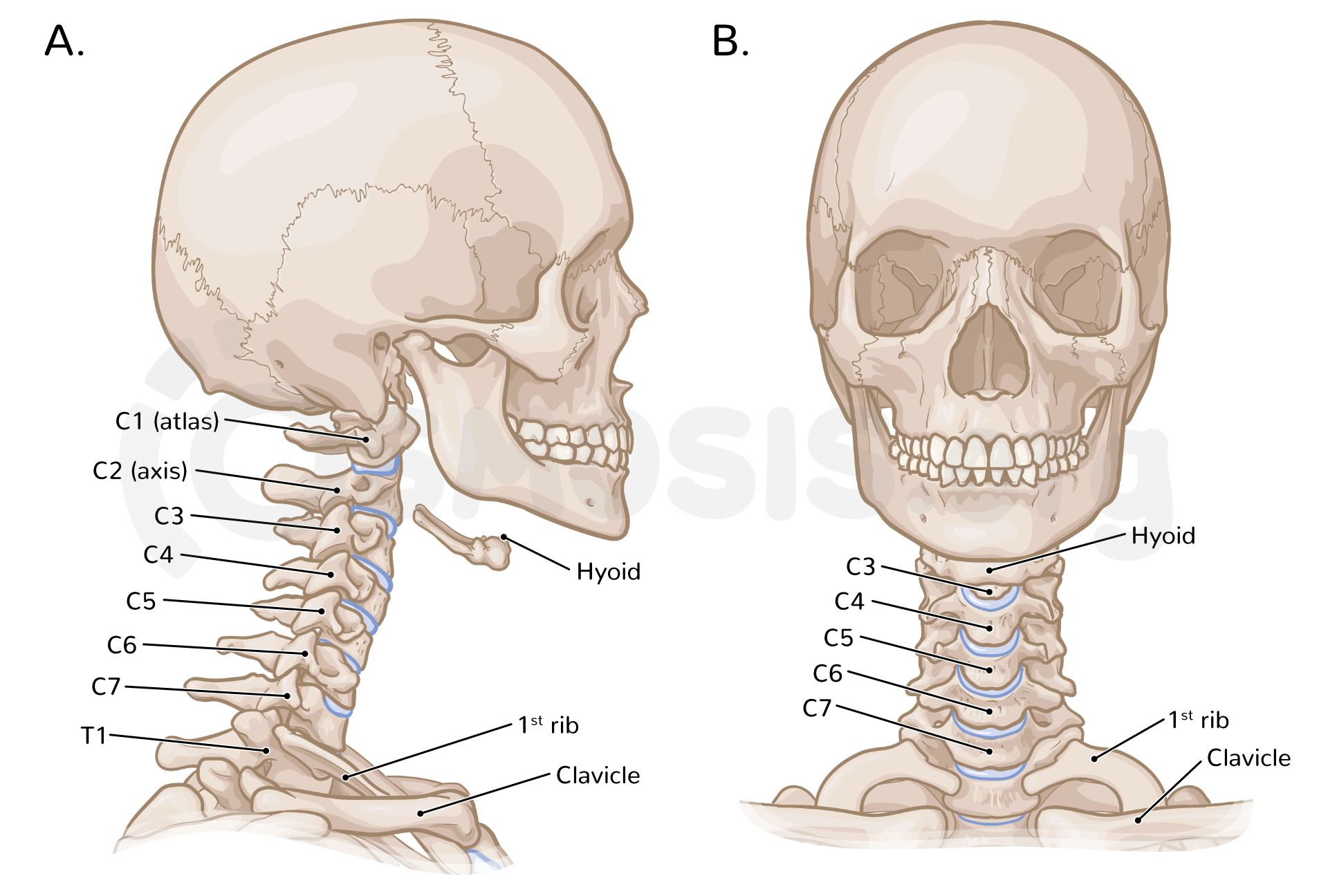 Figure 1: Overview of the bones of the neck. A. Lateral view. B. Anterior view. 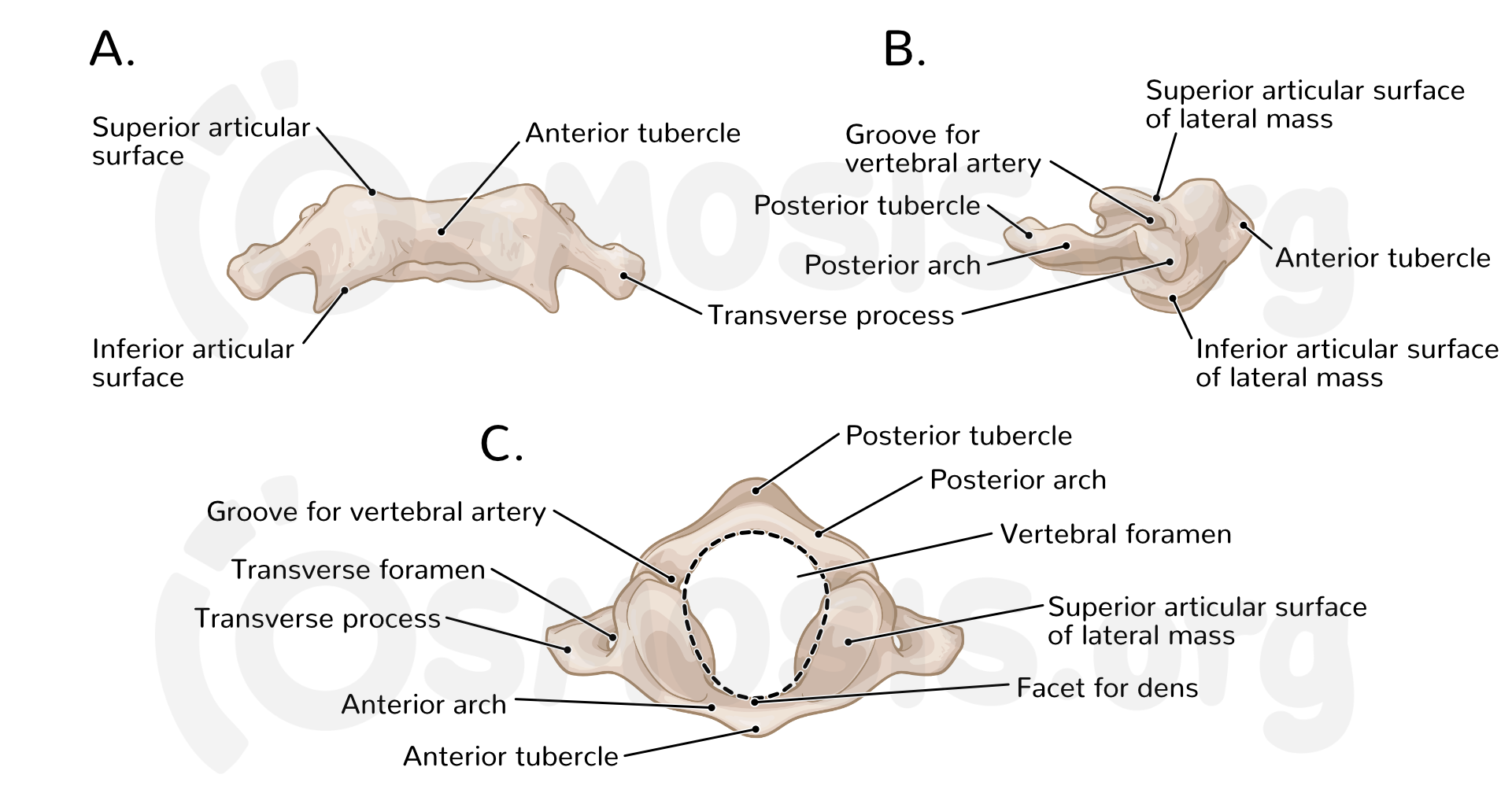 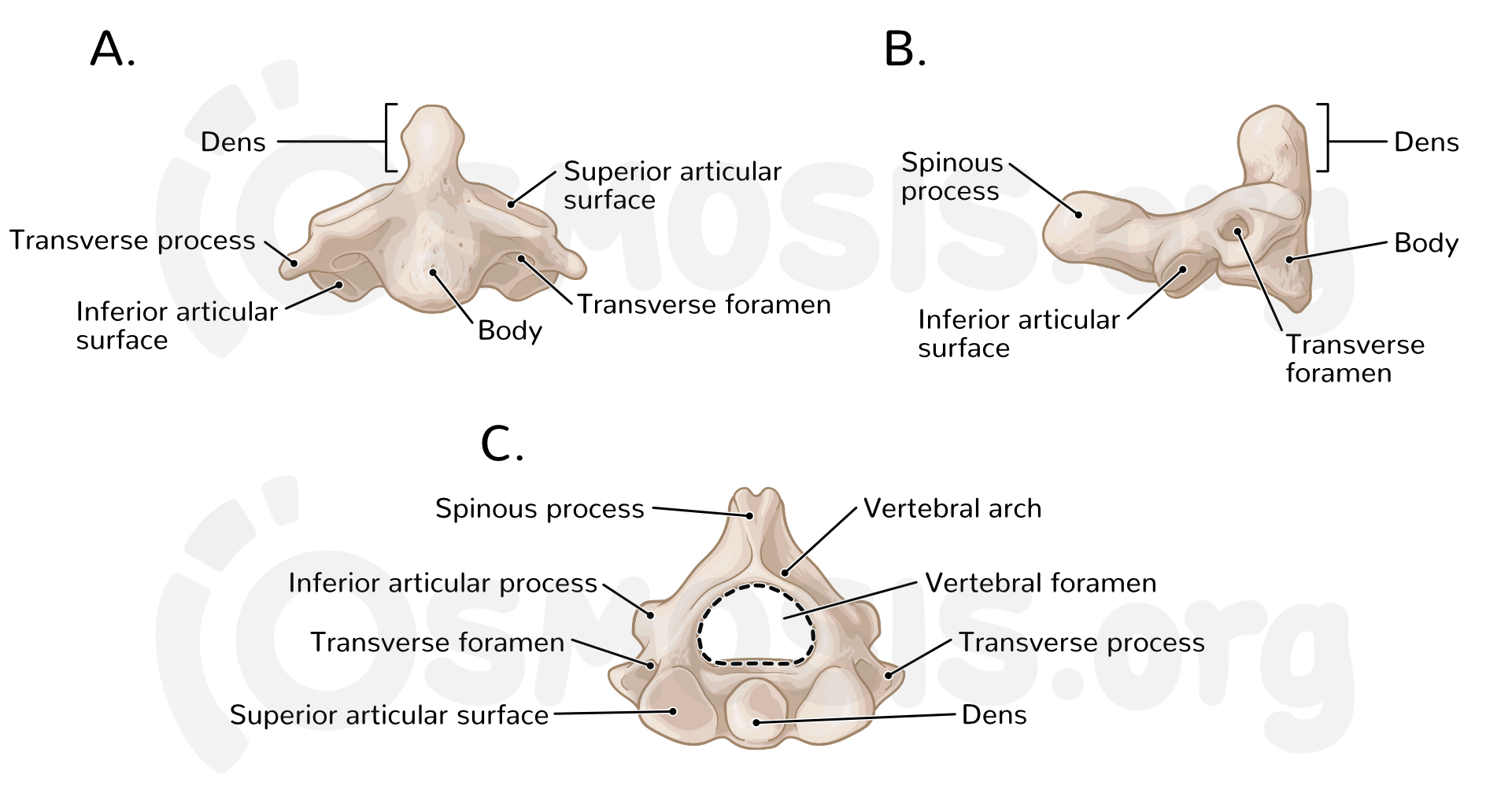 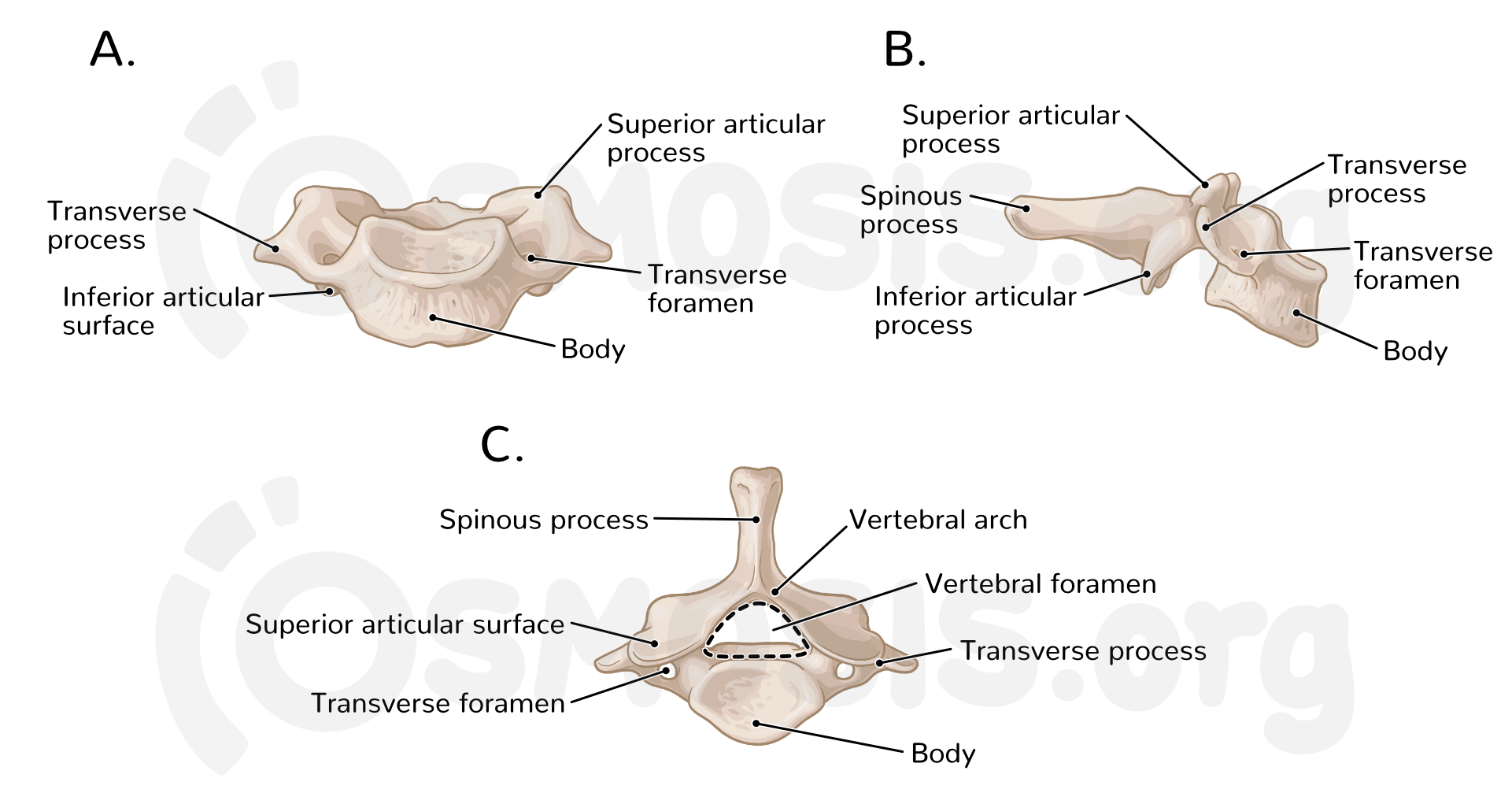 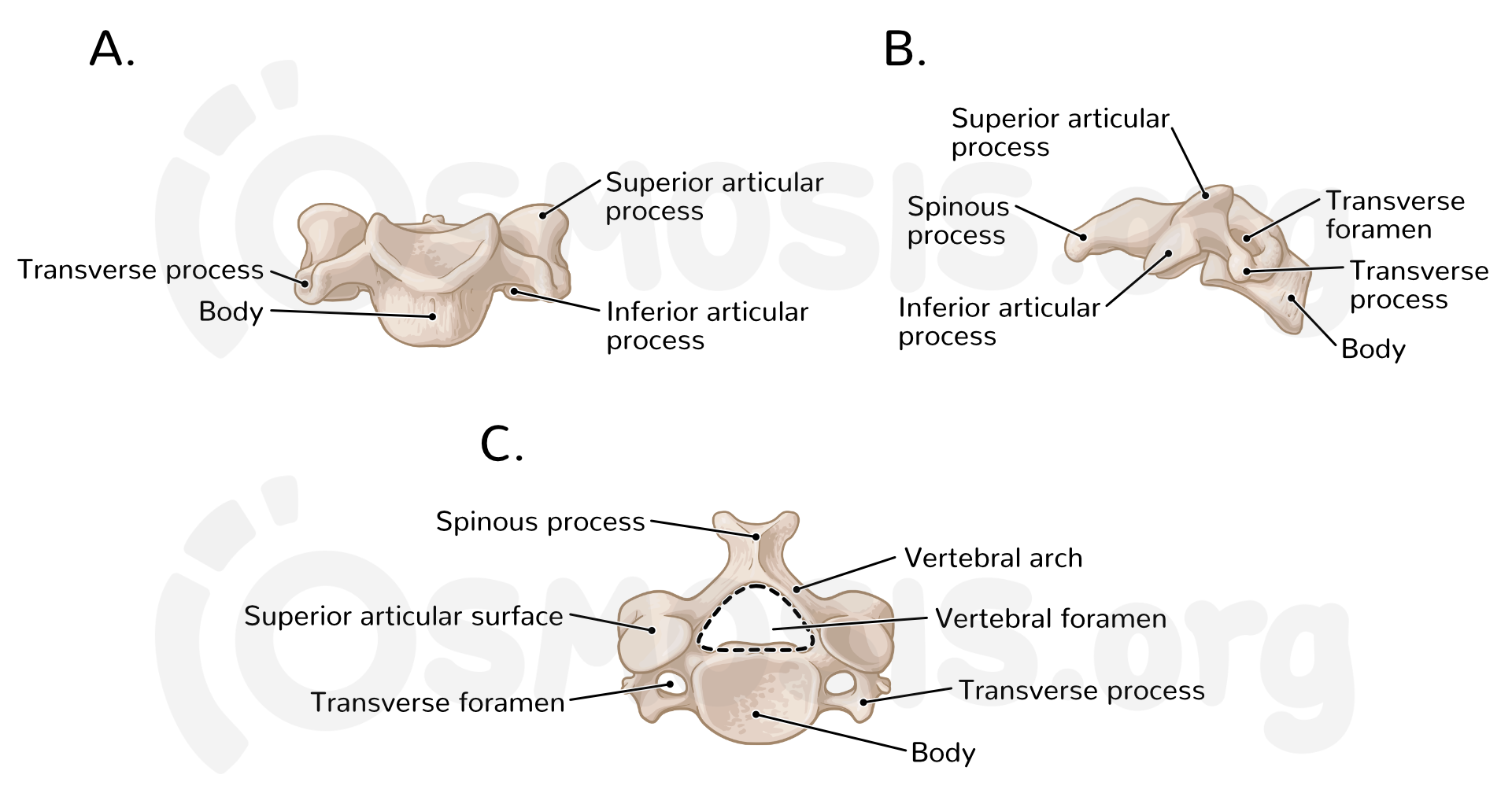 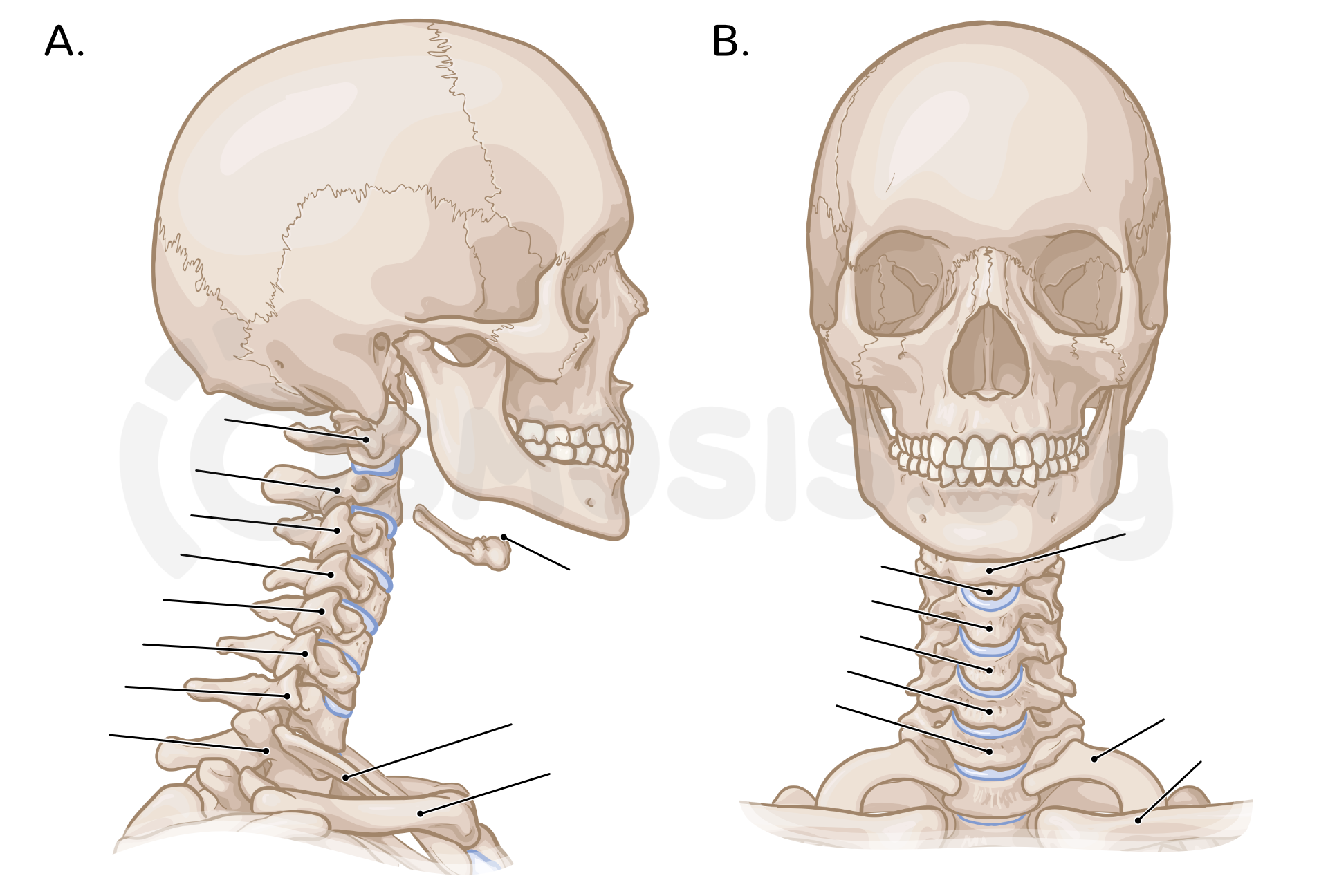 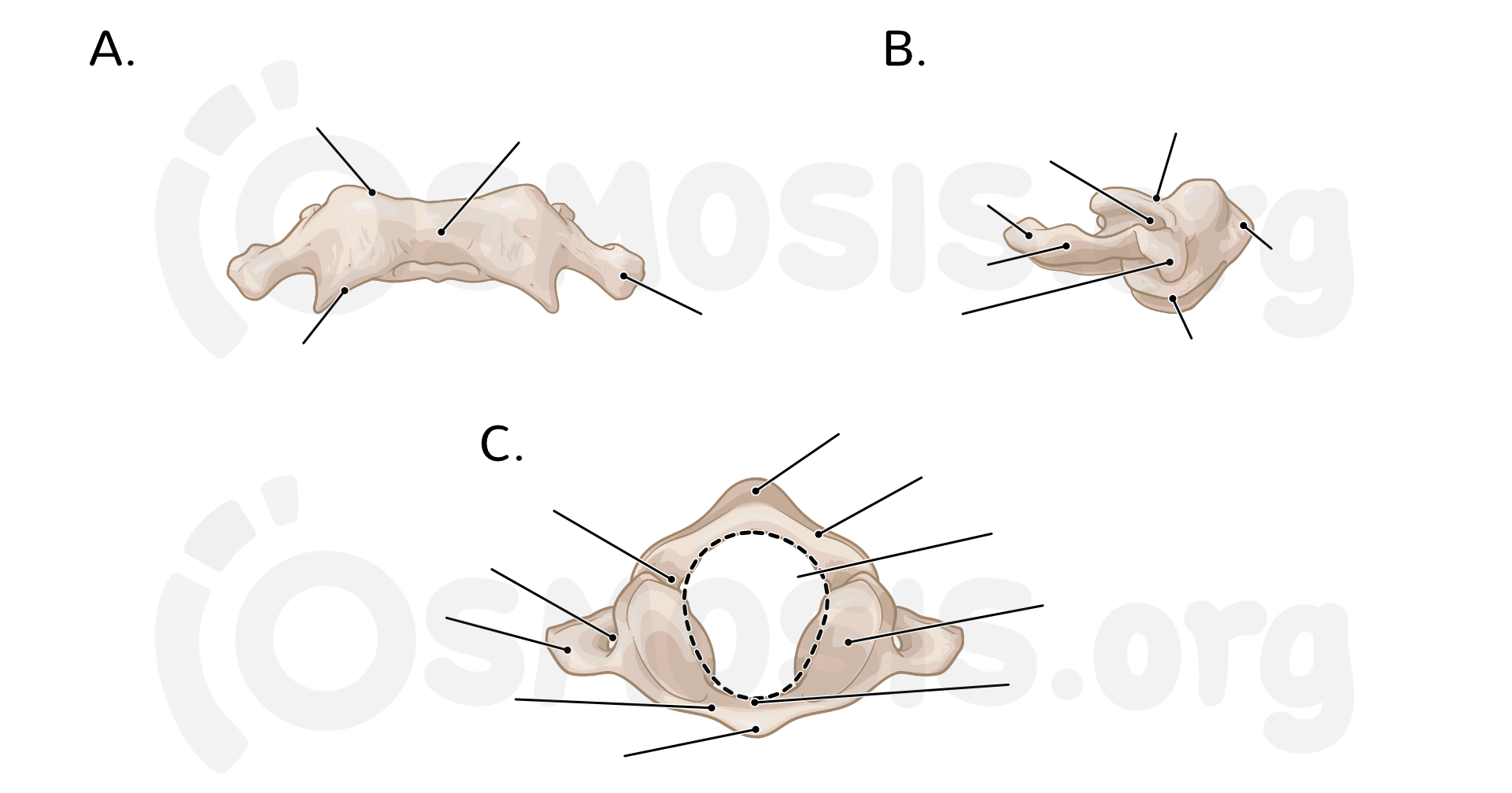 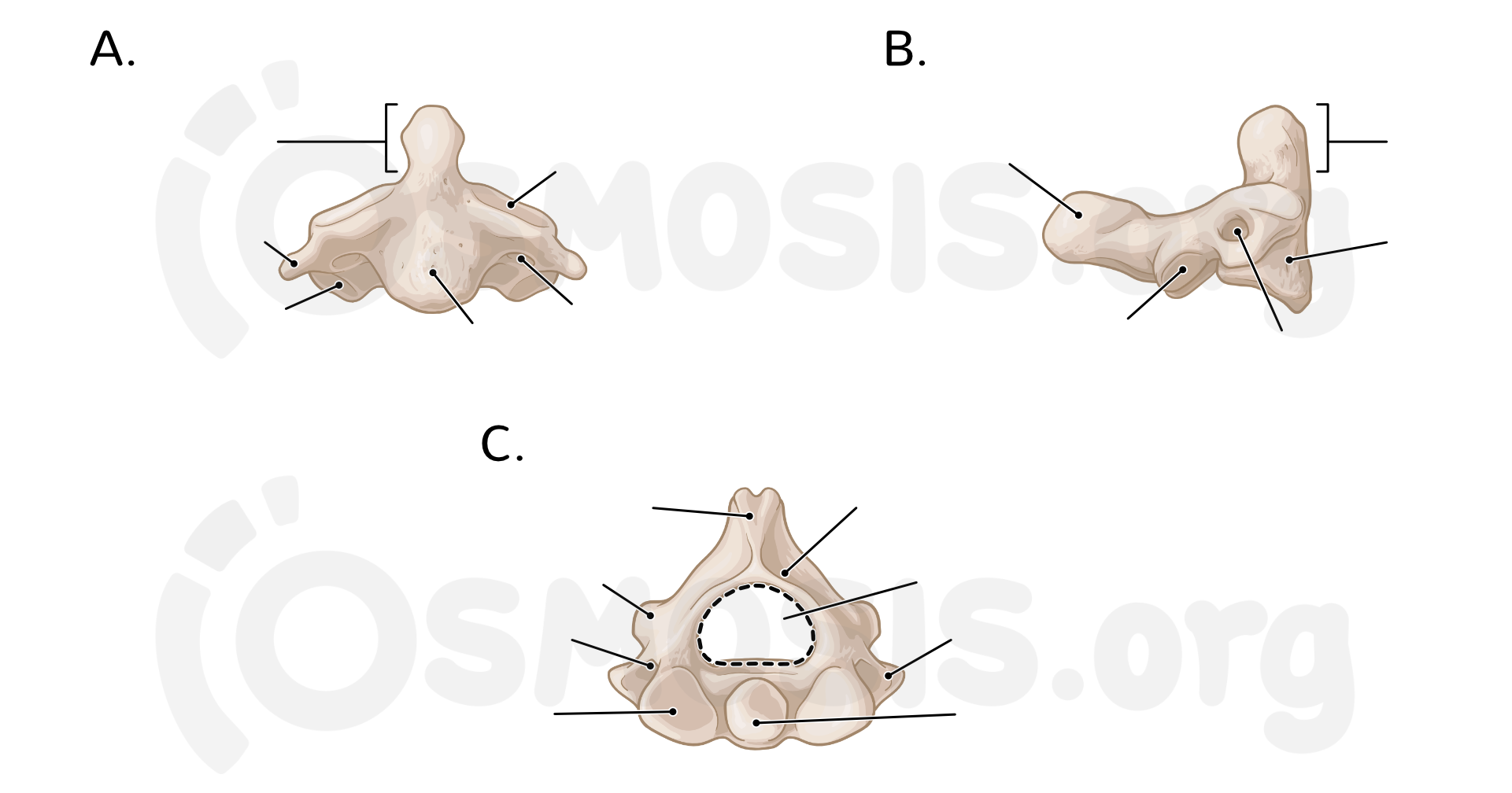 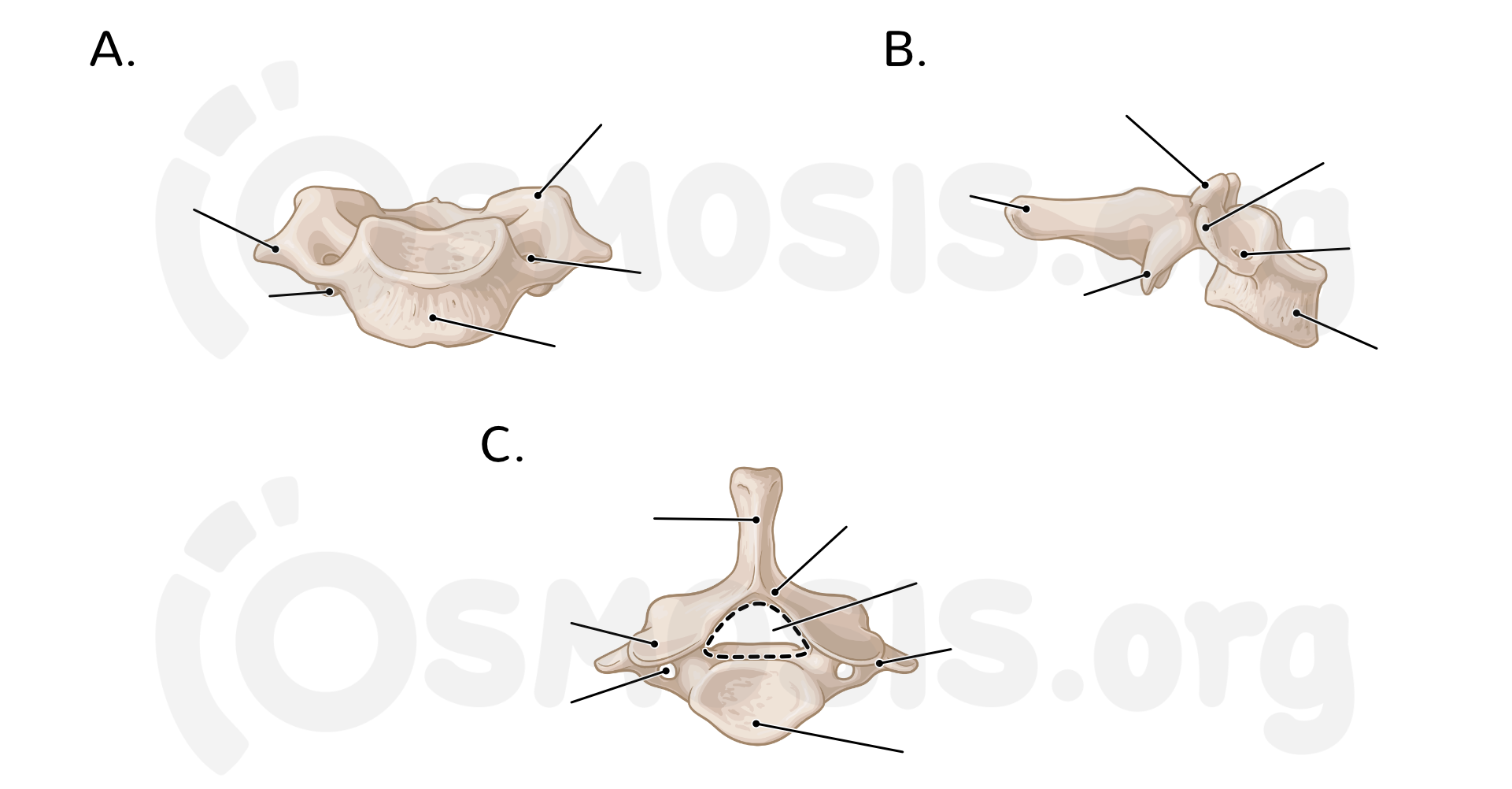 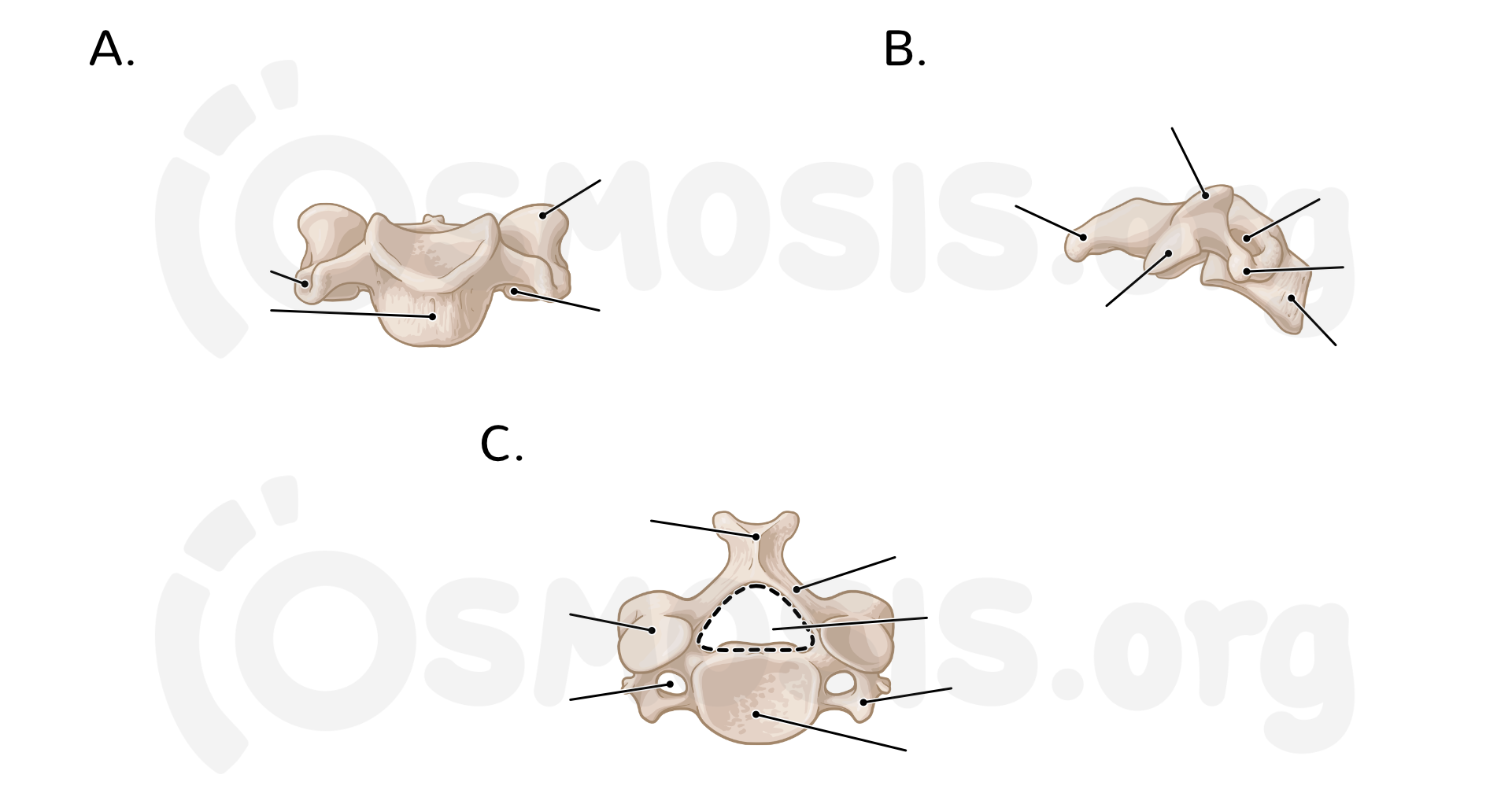 The hyoid bone is indicated in the image below.

.Alright, so let’s start with the cervical vertebrae, of which there are 7.

These are the smallest vertebrae, and they form the cervical region of the vertebral column, enclosing the cervical spinal cord and meninges.

Ok so, all typical vertebrae have a vertebral body, a vertebral arch and seven individual processes.

The vertebral body is situated anteriorly, and it’s small and longer from side to side than anteroposteriorly.

On the superior surface, there’s an elevated superolateral margin called the uncus of the body, or the uncinate process.

Next, there’s the vertebral arch, which is located posterior to the vertebral body and is formed by two pedicles and two laminae.

The vertebral foramen is rather large and, in the cervical region, triangular.

Next up, superior and inferior to the pedicles, there are shallow depressions called vertebral notches.

When the vertebrae articulate, these notches align with those on the neighboring vertebrae and form the openings of the intervertebral foramina through which the spinal nerves emerge from the vertebral column.

Finally, each typical vertebrae has seven processes that arise from the vertebral arch: a spinous process, two transverse processes and four articular processes.

So, the spinous process is located in the middle and projects posteriorly and usually inferiorly, typically overlapping the vertebra below.

Next, there are the two transverse processes, which project laterally and end as two projections called the anterior and posterior tubercle, which serve as muscle attachment points.

The transverse processes of C1 - C6 also have a hole called the foramen transversarium, which serves for the passage of the vertebral arteries and veins.

The foramen transversarium of C7 only houses small accessory veins, and it can be absent.

Finally, the four articular processes, two superior and two inferior, arise from the junctions of the pedicles and laminae, and each has an articular surface or facet.

The superior and inferior articular processes articulate with the corresponding processes of the neighboring vertebrae to form the zygapophysial joints.

These joints determine the types of movement permitted and restricted between the neighboring vertebrae of each region and also they keep the vertebrae aligned, preventing one vertebra from translating, or slipping, anteriorly on the vertebra below.

Now let’s switch gears and look at the atypical vertebrae, called so because they have different characteristics from the other vertebrae.

First, vertebra C1, also called the atlas, is a ring shaped bone that doesn’t have a body or a spinous process.

The transverse processes of the atlas arise from the lateral masses, so these processes are placed more laterally than those of the inferior vertebrae.

This makes the atlas the widest of the cervical vertebrae.

These surfaces articulate with two large cranial protuberances on either side of the foramen magnum on the occipital bone, to form the atlanto-occipital joint.

The movements permitted in this joint are flexion and extension - think about head banging at a rock concert - and a small amount of lateral flexion and rotation, like when you look over your shoulder.

The bones of the neck consist of the cervical spine made up of seven vertebrae and support the weight of the head. Between each vertebra is an intervertebral disk that helps cushion the spinal cord. The spinal cord travels down the center of the spine, and branches out to form nerves that control all parts of the body. Other bones of the neck include the hyoid bone, the manubrium of the sternum, and the clavicles.