Assessments
Bones of the upper limb

Bones of the Upper Limb 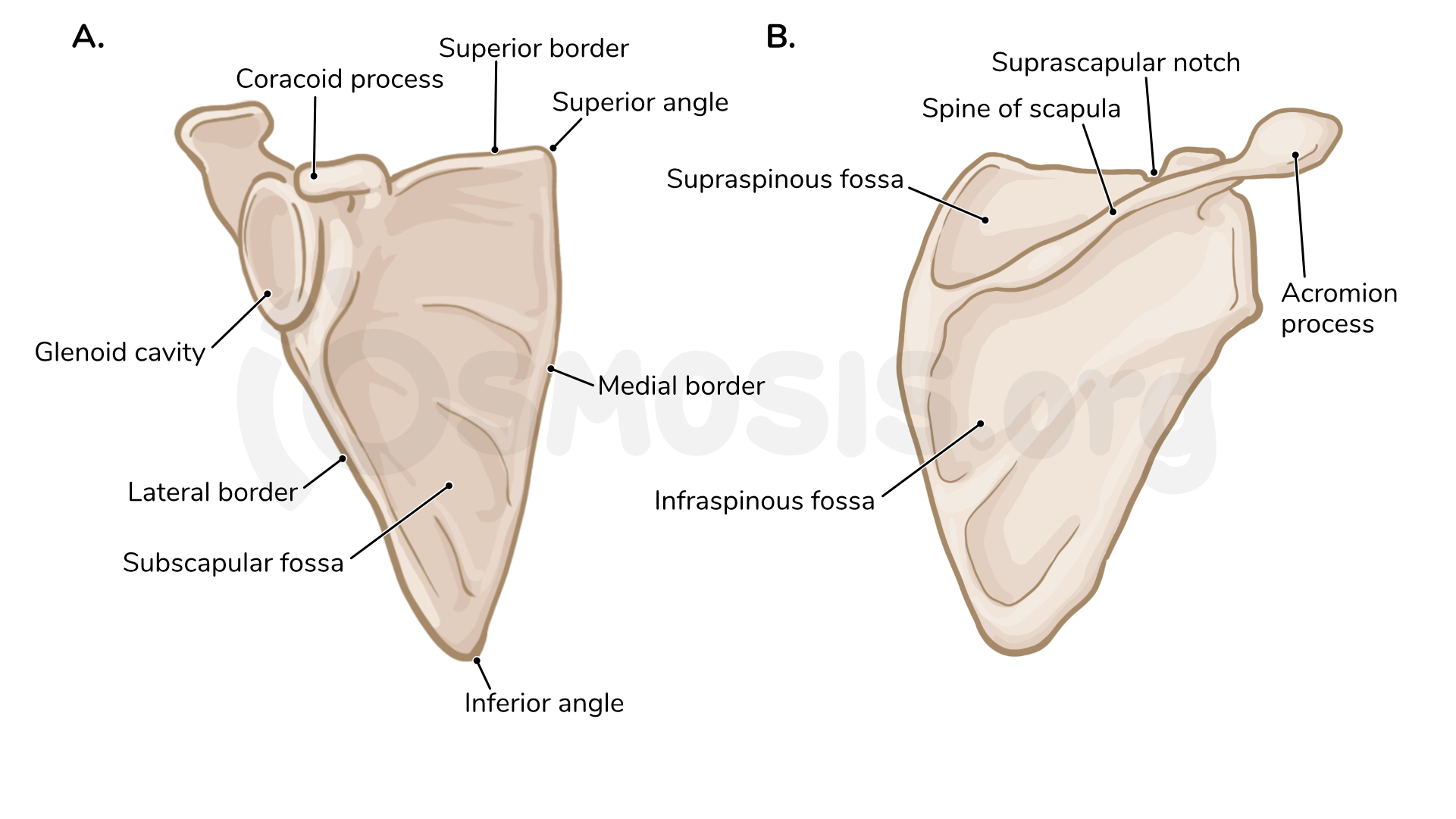 Figure 1. A Anterior and B posterior view of scapula. 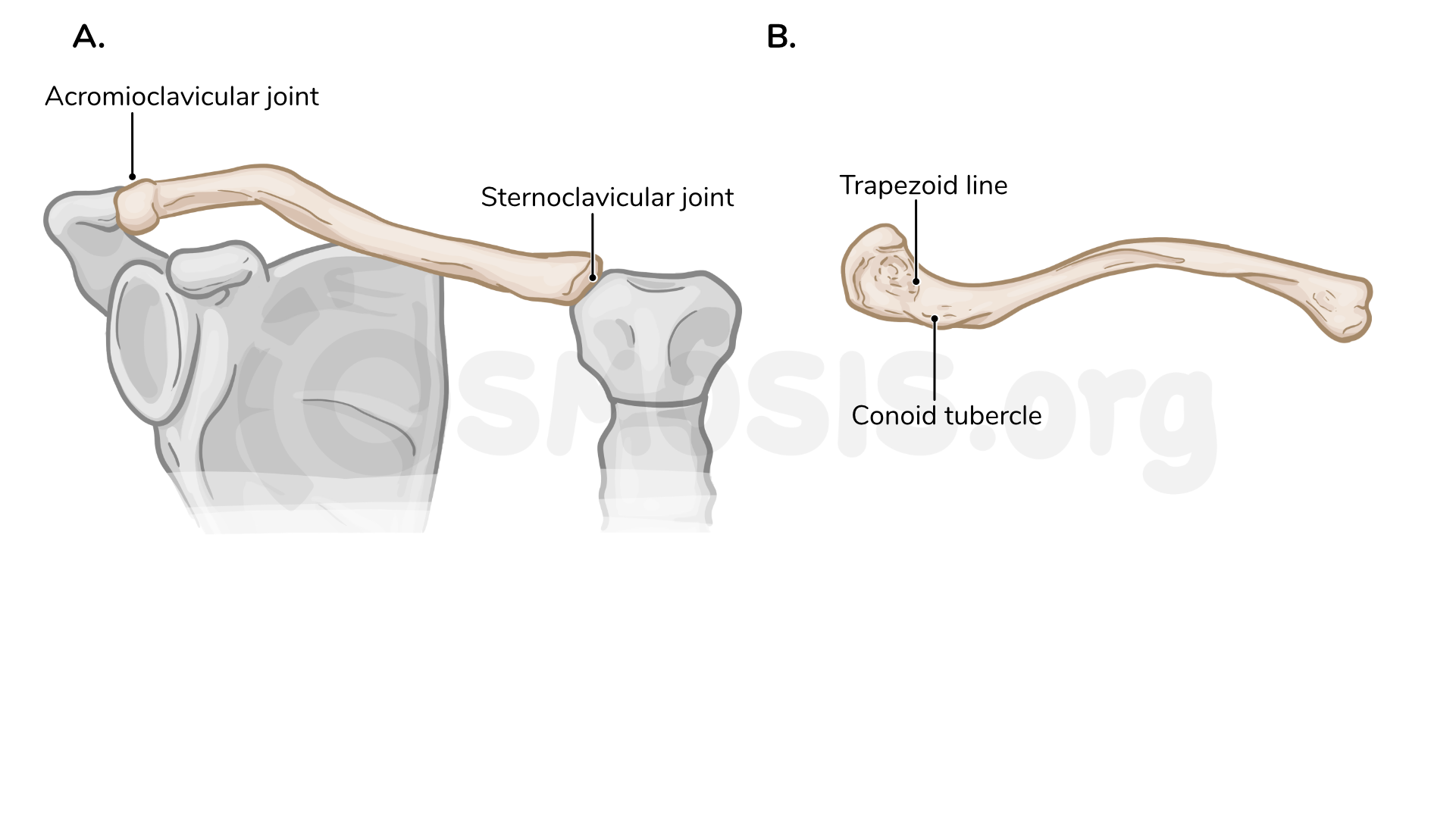 Figure 2. A Anterior view and B inferior view of clavicle. 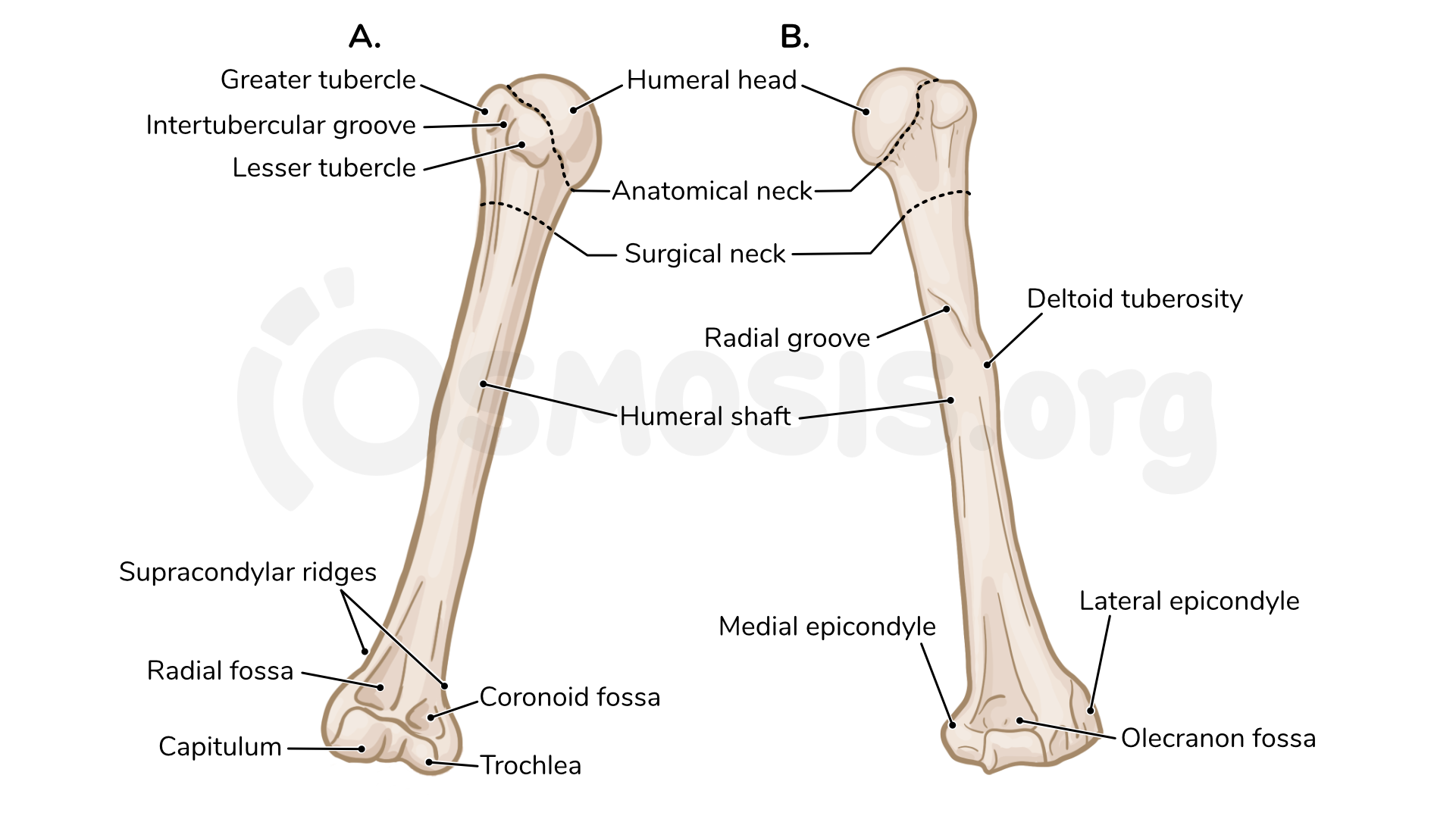 Figure 3. A Anterior and B posterior view of humerus. 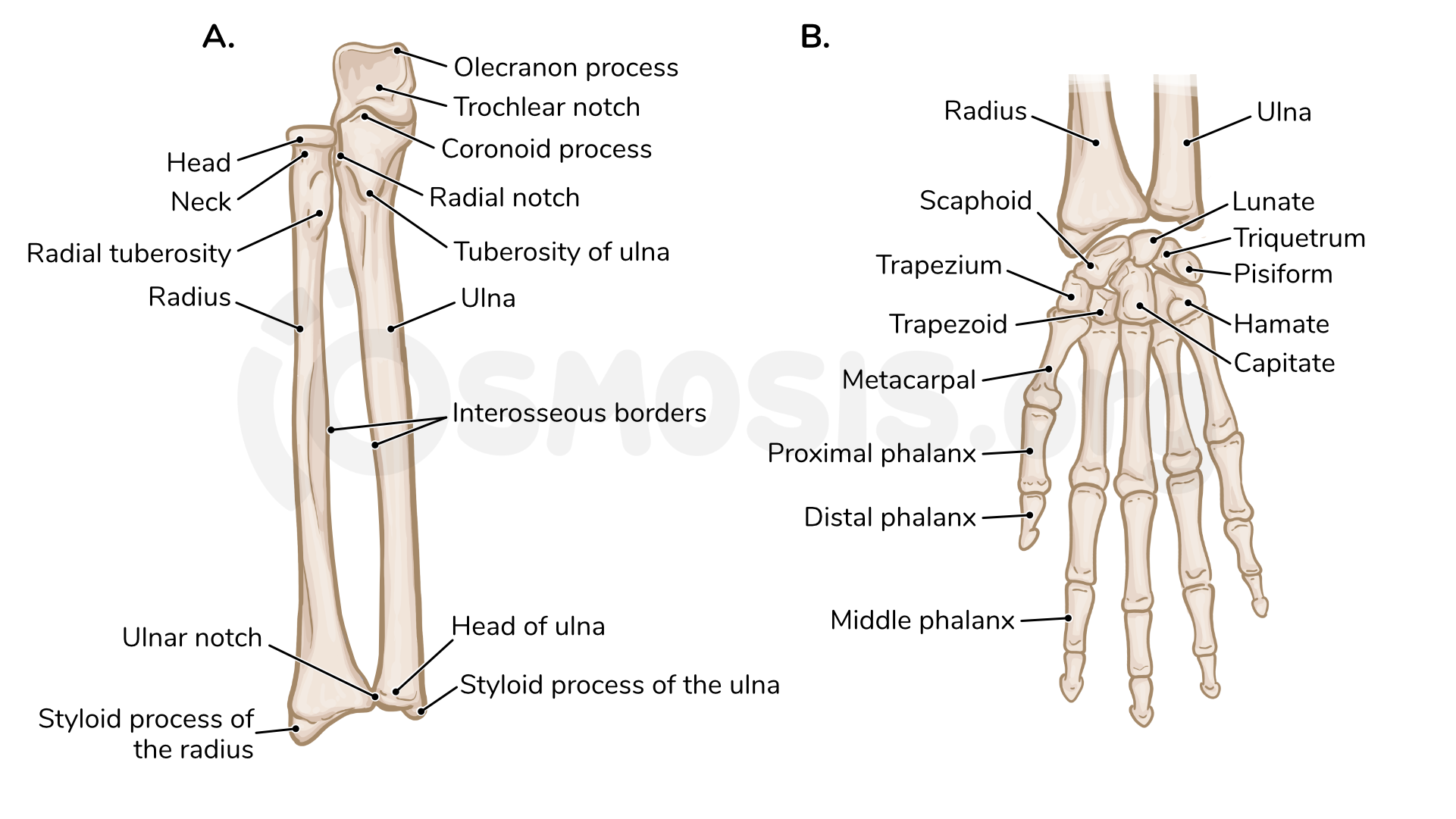 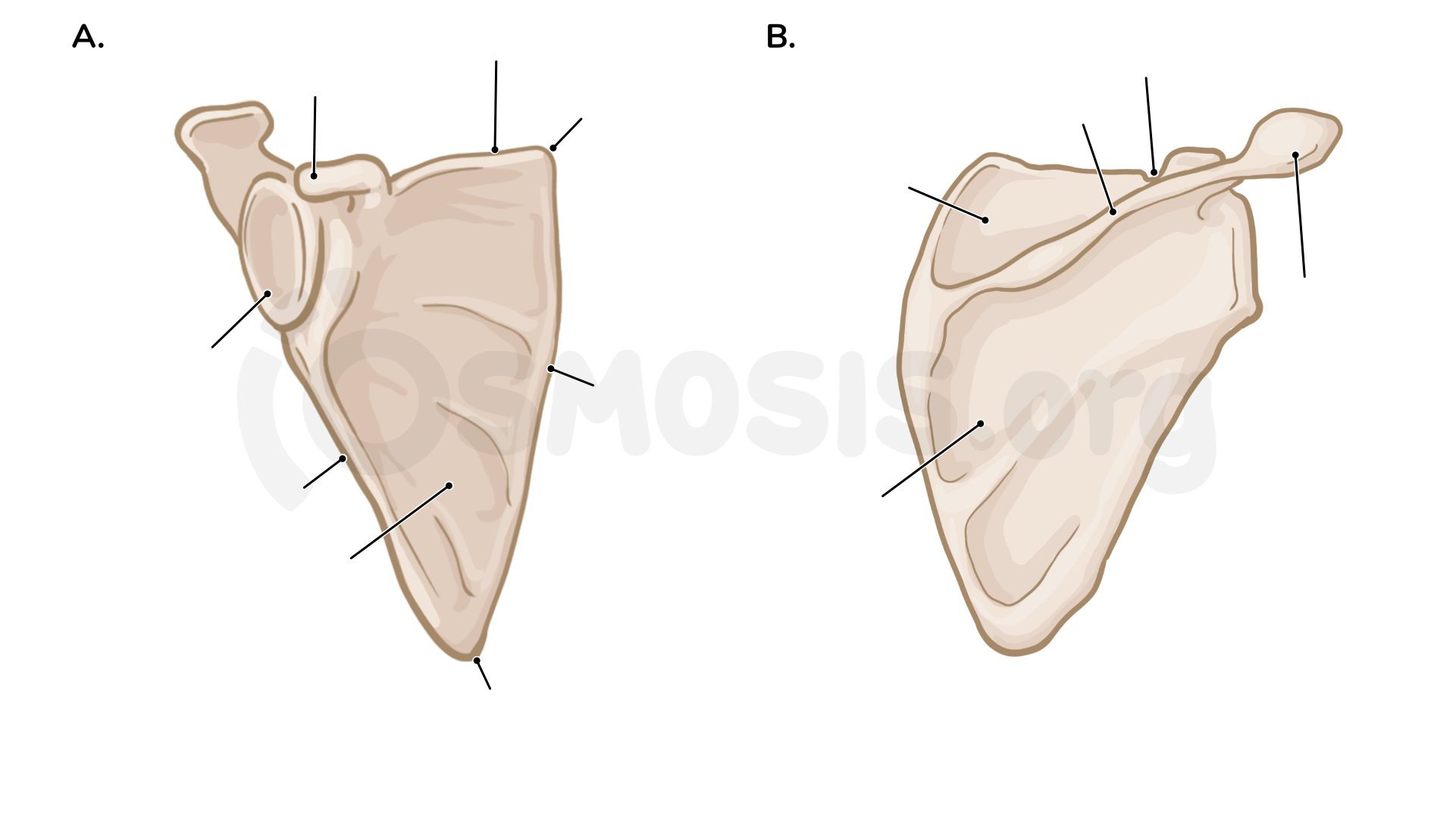 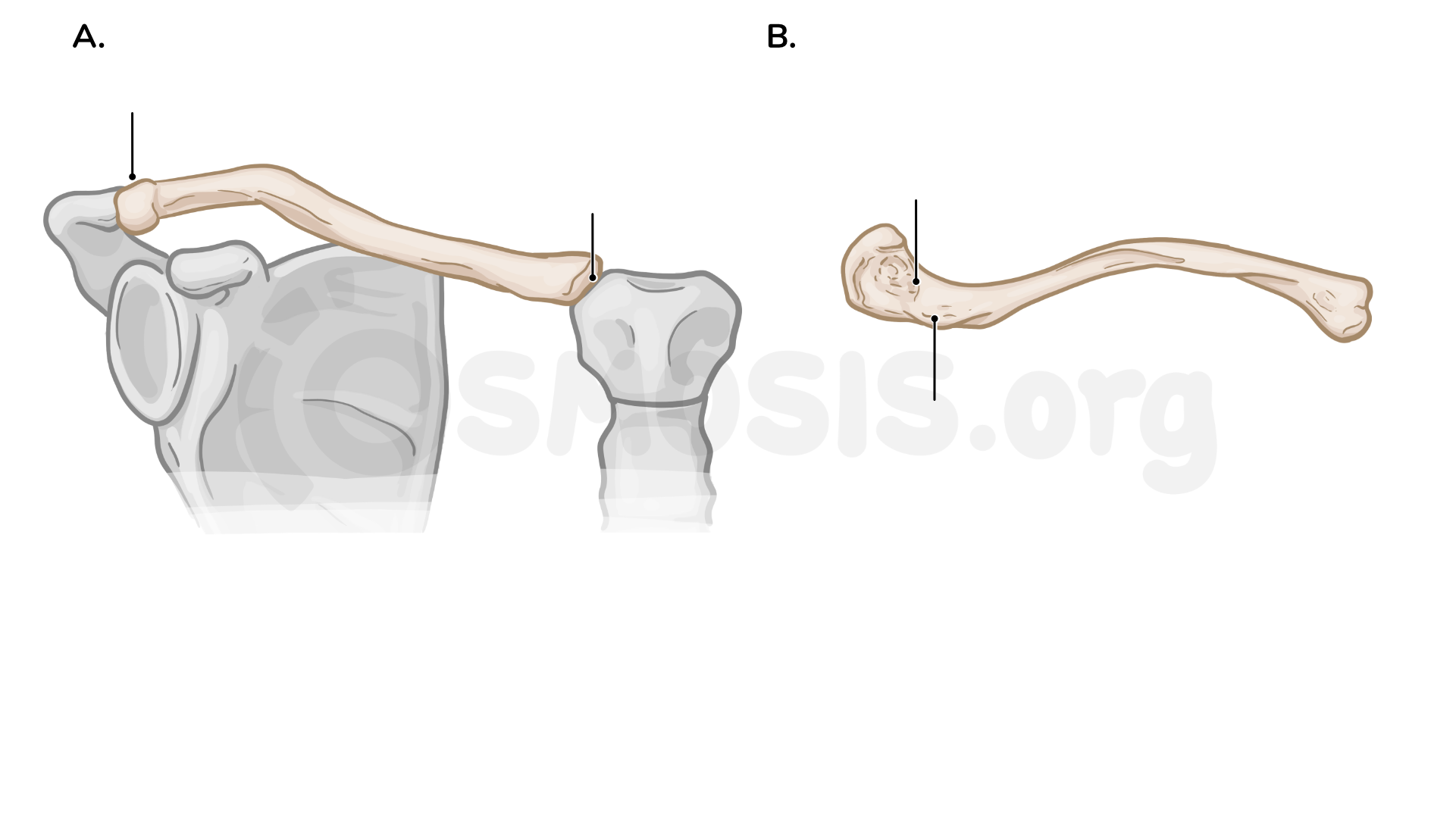 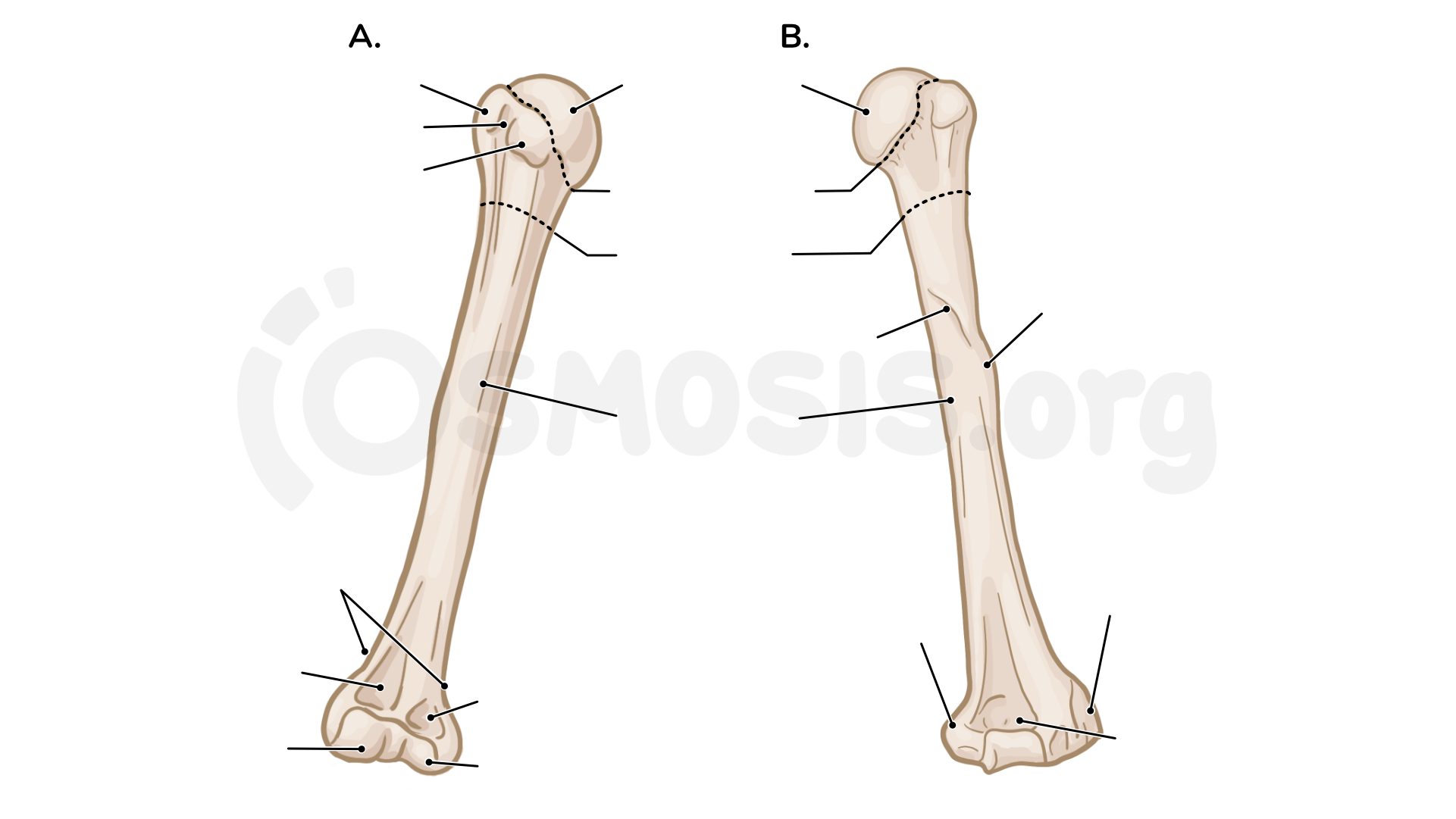 A patient is experiencing severe pain in their left wrist after landing on it awkwardly doing parkour. The x-ray of their wrist shows that one of the carpal bones involved with the radiocarpal joint is fractured. Which of the following carpal bones is most likely fractured? The upper limb is connected to the axial skeleton, which is the cranium, vertebral column, and associated thoracic cage, by the bony pectoral girdle at the sternoclavicular joint, which is the connection between the clavicle and sternum.

Each upper limb is made up of 32 bones, and has a number of different regions.

First, there’s the pectoral girdle, which consists of 2 bones: the scapula, also called the shoulder blade, and the clavicle, also known as the collarbone.

Then there’s the arm, which only has one bone, called the humerus.

Then we have the forearm, which has two bones called the radius and the ulna.

OK, now let’s have a look at the shoulder girdle first.

The shoulder girdle consists of the scapula and clavicle, and articulates anteriorly with the manubrium of the sternum.

Starting with the scapula, it’s a flat triangular bone located on the posterior aspect of the shoulder, extending over the second to the seventh ribs.

The scapula helps to connect the rest of the upper limb to the trunk, while stabilizing and assisting the shoulder during movement while serving as an attachment point for numerous muscles and ligaments.

Now, like any respectable triangle, the scapula has three borders; the shortest and the thinnest of them is the superior border.

Then there’s the medial border, which runs parallel to the vertebral column, and finally, there’s the lateral border which is the thickest one.

The lateral border is also known as the axillary border because it points towards the axilla, or armpit region.

At the lateral part of the superior border, there’s a small indentation called the scapular notch through which the suprascapular nerve passes.

Immediately lateral to the notch, the scapula has a bony projection called the coracoid process, which is this bony hook that first projects anteriorly, and then curves towards the lateral side similar to a bent finger.

The coracoid process serves as an attachment point for four structures including the coracoacromial ligament, the pectoralis minor muscle, the coracobrachialis muscle, and the short head of the biceps brachii.

If we flip the scapula over, we can see its posterior surface.

Below the superior border, there’s a prominent ridge of bone called the spine of the scapula, which becomes broader as it extends laterally and superiorly to give rise to the acromion process, or simply the acromion.

This is where a muscle called the infraspinatus attaches.

The space above the spine is called the supraspinous fossa, and as you might have guessed it… well, it is an attachment point for the supraspinatus muscle.

The spine of the scapula also has an attachment point for the deltoid muscle on the deltoid tubercle of the spine, in addition to attachments for the trapezius muscle.

Inferior to the coracoid process, on the superior lateral surface of the scapula, there’s the glenoid cavity, which is a shallow, cup-like fossa facing the lateral side.

The glenoid cavity fits the head of the humerus to form the glenohumeral, or shoulder, joint.

And the coracoacromial ligament stabilizes this joint.

Just above the glenoid cavity, there’s a small bony bump called the supraglenoid tubercle which serves as an attachment point for the long head of the biceps brachii muscle.

Again, immediately below the glenoid cavity, there’s another bony bump called the infraglenoid tubercle, which serves as an attachment point for the long head of the triceps brachii muscle.

Ok, now the tip of the acromion articulates with the lateral end of an S-shaped bone called the clavicle, forming the acromioclavicular joint, which helps with stability and motion of the shoulder joint.

The medial end of the clavicle is enlarged and triangular shaped, and articulates with the manubrium, which is the upper part of the sternum, to form the sternoclavicular joint.

The medial two thirds of the clavicle are convex anteriorly, and the lateral third is flattened and concave anteriorly.

On the inferior surface of the clavicle, immediately medial to its lateral end, there’s a small, oblique ridge of bone called the trapezoid line, where the trapezoid ligament attaches.

Medial to the trapezoid line, there’s the conoid tubercle, which is where the conoid ligament attaches.

Both the trapezoid and the conoid ligaments help stabilize the pectoral girdle.

Finally, the inferior side of the clavicle has a shallow groove called the subclavian groove, where the subclavius muscle attaches.

When determining the orientation of the clavicle, it is good to remember that the lateral portion is flat, and the inferior surface is rough compared to the smooth superior surface.

Finally, the clavicle’s most important job is to suspend the scapula away from the trunk, allowing the upper limb maximum freedom of motion.

The clavicle is also one of the bony boundaries of the cervico-axillary canal, which is a passageway that extends between the upper limb and the neck, so the clavicle also protects the neurovascular bundle supplying the upper limb.

Now that was a lot of info!

Feel free to take a second to pause the video and see if you can label these missing parts of the scapula from A to F?

OK, now let’s look at that single bone in the arm, the humerus.

The humerus is the largest bone of the upper limb.

Lateral to the humeral head, there’s a bony protuberance called the greater tubercle, and anterior to it is the lesser tubercle which is more on the anterior humerus.

Between these two tubercles, there’s a narrow groove called the intertubercular sulcus, or the bicipital groove, because the tendon of the biceps brachii muscle passes through it.

Just below the humeral head, there’s the anatomical neck of the humerus.

This is formed by a groove separating the humeral head from the greater and lesser tubercles, and is where the glenohumeral joint capsule attaches.

Distal to the tubercles, there’s the surgical neck of the humerus, which is where the broad proximal part of the humerus meets the narrow humeral shaft.

This makes the surgical neck relatively weaker and thus a common site for humeral fractures.

On the posterior surface of the shaft, there’s a shallow but broad bone depression called the radial groove, which is where the radial nerve passes through.

On the lateral side of the shaft, there’s a rough small bump called the deltoid tuberosity which is where the deltoid muscle attaches.

Towards its distal end, the humerus flattens a bit, giving rise to two bony projections known as the medial and lateral epicondyles.

Above the lateral epicondyle, there’s the lateral supracondylar ridge, which is a roughened ridge of bone where the extensor carpi radialis longus, the brachioradialis muscle, and the triceps brachii muscles attach.

Above the medial epicondyle there’s the medial supracondylar ridge, which serves to attach the medial head of the triceps, the brachialis, and the pronator teres.

Finally, the tip of the distal humerus, referred to as the condyle of the humerus, has two articular surfaces, which makes sense as it articulates with the two bones of the forearm; the radius and ulna.

Medially, there’s the trochlea, which literally translates to “pulley”; which is lucky, because it really looks like one!

The trochlea articulates with the trochlear notch of the ulna.

And laterally, there’s the capitulum, which articulates with the head of the radius, and it literally means “tiny head” because it looks a bit like a tiny bald head.

It can be difficult to remember which fossa articulates with which bone, so you can try and remember the phrase ‘CRAzy TULips’.

On the anterior surface of the humerus, proximal to the trochlea, there’s a small depression called the coronoid fossa.

Lateral to the coronoid fossa there’s the radial fossa, which sits just proximally to the capitulum.

If we flip the bone and look on the posterior side just at the same level, there is a much larger depression called the olecranon fossa, which accommodates the olecranon process of the ulna when the forearm is fully extended.

Next up, there’s the forearm, which is made of two parallel bones; the ulna, medially, and the radius, laterally.

You can remember their position when you text your friends “UM, RLy?”!

The ulna is the main stabilizing bone of the forearm.